FOTDs: From the Archives

Early this month, just after returning from England, I started my summer job in the university archives. These archives house documents related to the history of the university, over a century's worth of senior theses, and the lifelong correspondence of some prominent alumni. My job for the summer is to reprocess the papers of one such alum, a New York-based lawyer who was involved in the founding of the League of Nations, though he later resigned in disgust at the American government's reluctance to get involved in anything resembling international cooperation. My task is to sit in the basement and reorganize a huge collection of letters written and received between 1917 and 1951. I've spent 15 hours with this collection and am up to the summer of 1922, and I've been working pretty efficiently, so you can imagine how many papers are involved.

This might sound like a tedious job, but I've been enjoying it immensely. As most of you know, I specialize in Renaissance literature, and the archival sources I've used so far for my own graduate work have been from the 16th and 17th centuries. Do you know how thrilled I was to discover that 95% of the letters I was reorganizing this summer were typed? I suppose it had never occurred to me that archival work didn't have to involve deciphering and transcribing early modern secretary hand, an early form of shorthand that looks like this:


And don't get me started on blackletter, the typeface generally known today as "Gothic" or "that medieval-looking font." Blackletter was the standard font for printed books until the late 16th century, but it does crop up occasionally in 17th-century texts, giving me a nasty little surprise every time. My real objection to blackletter is not that it's hard to read (unless it's messily printed), but that it's so damn ugly:


All this is to say, bless the invention of the typewriter.

It also feels like a great privilege—and a thrilling transgression—to sort through someone's private correspondence. Until this month, I'd never heard of the person in question or taken a special interest in the 1920s (beauty trends aside, of course), but this job has given me a new fascination with the language and manners of the time. Reading letters is a great opportunity to observe the subtle gradations in formality and politeness from "My dear Dr. Lastname" to "Dear Lastname" to "Dear Firstname" to "Dear Nickname." It's also a great opportunity to catch up on 95-year-old political gossip:

"You will have to tell me whom I am to vote for for president. Harding is a numbskull, for whom I could not vote under any circumstances. Cox is carrying on a campaign on the level of a candidate for county clerk or sheriff."

"We have had two or three rather unusual murders in New York recently, and American intelligence just at present is far more interested in why a woman in black shot a gent at three o'clock in the morning, than it is in any international question. There is a lower level of thinking in America just now than there is in any other country in the world."

And is it just me, or is Jazz Age slang better than any other slang? They sure did love the word "peach" and all possible variations on it.

Other noteworthy finds: a handwritten letter from Marie Curie, an admission that "the doctrine of the Trinity...is to my mind an outgrown bit of philosophical speculation," and an early and creepy form of the smiley face: 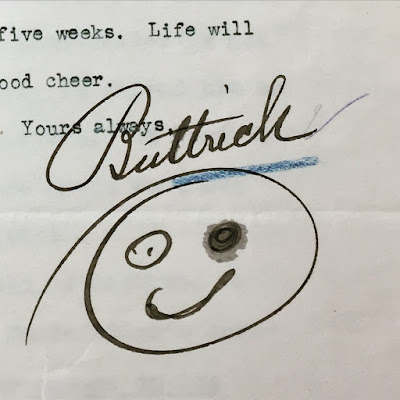 But what does this all have to do with makeup, you ask? Well, in honor of my archival pursuits, I thought I'd use this post to spotlight some new-old favorites from my own beauty archives. These are products I bought some time ago but never used regularly because they disappointed me in some way, or because I sort of forgot they existed. In fact, quite a few of them appeared on last year's "most disappointing purchases" list, which also featured my most-worn lipstick of this spring and summer, Urban Decay Streak. This wasn't even a Project Make-a-Dent scenario in which I resolved to use my neglected products; I just naturally reached for them more and more. I realize now that I'm too fickle to consign anything to a worst-of-the-year list; my tastes change so rapidly and randomly that making any more such lists would be a waste of time. And let's be honest: we beauty addicts are too fond of consigning products to oblivion in order to justify buying new ones. Makeup doesn't have to be perfect to be useful and pleasing! In that spirit, here's a small handful of FOTDs from the past few days, featuring the following archival finds: 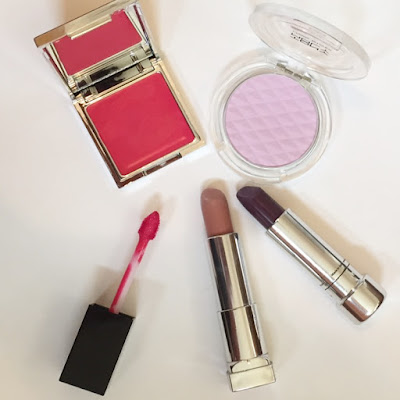 Every summer, when the heat and humidity truly set in, I reach a point of makeup fatigue. There's no sense in constructing an elaborate eye look or applying a bright lipstick with a precise hand when all that color is going to melt and smear within five minutes. When I do wear a bold lipstick, I either apply it as a stain or make sure the formula is matte enough to last. Otherwise, I reach for nudes and neutrals that won't cause a fuss as they disappear from my lips.

This summer's makeup fatigue has led me back to Maybelline Nude Lust, a lipstick I reviewed very early in this blog, in a post that's awfully pretentious even by my standards. I'm perpetually on the lookout for my perfect nude lipstick—not a MLBB, but a true concealer nude with the same undertones as my skin—and Nude Lust is the closest I've come so far. It's a light beige with a hint of gray, and it looks oddly natural on my lips. 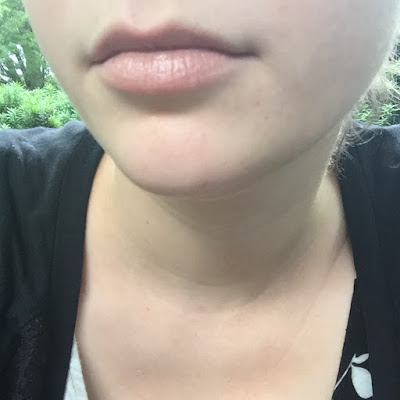 So natural, in fact, that I've come to the conclusion that my skin must also contain a hint of gray. Just call me Marceline. 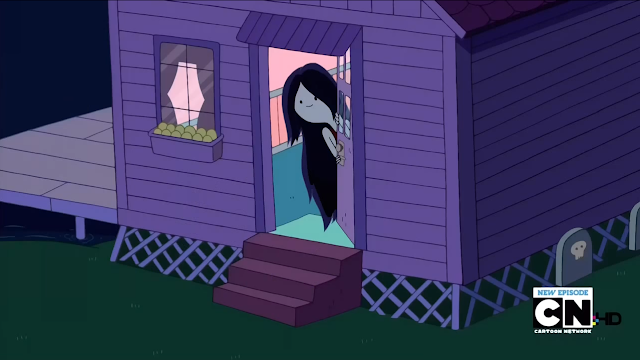 I've also developed a new appreciation for Tony Moly Milky Violet, a blush that initially let me down with its sheerness. The fact is, a subtle lavender blush is a lot more useful than a bright lavender blush, and Milky Violet can be built up to something approaching opacity anyway. On my last visit to the archives, I wore Kiko Infinity eyeshadow #251 (sparkly lavender) over primer, with a bit of NARS Lhasa on my lashlines; Milky Violet on my cheeks; and Nude Lust on my lips. Neutral with an undead flair. I'm spending a lot of time among ghosts this summer, after all. 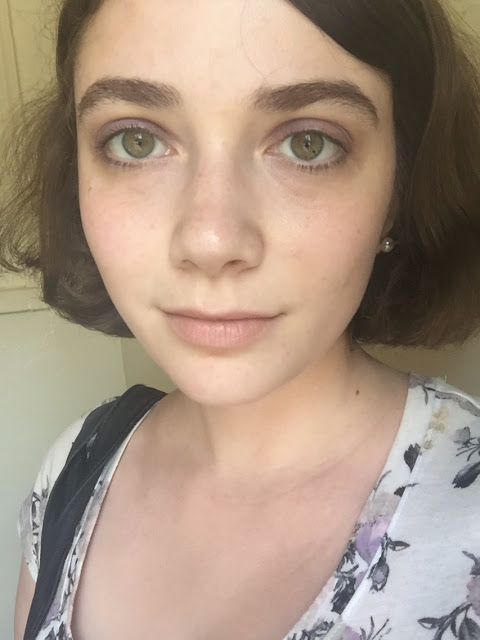 Perhaps the most annoying part of my archives job is reading about the correspondents' cool, refreshing summer vacations up north. In the 1920s, wealthy New Yorkers fled the sweltering city in the summer and had their secretaries forward their business correspondence to their pretentiously named lakeside houses in Maine or Canada.  But what about those secretaries, trapped in New York before the advent of central air conditioning? I imagine they grumbled as much while addressing letters to The-Eyrie-by-the-Water as I do while walking through 90% humidity to my summer job a century later.

This weather is enough to make one resent the bright, juicy corals and oranges of the season and wonder instead what a chic Slytherin alumna would wear on her lips if she were trapped in the northeastern United States at this time of the year. & Other Stories Droguet Purple is the most sinister lipstick I own, and until this week I hadn't worn it since Halloween. To make the color less heavy and severe, I sheered it out across my lips, working it into the skin to build up a stain. Then I added a bit more pigment to the center of my lips for a witchy ombré effect:

The same idea, with a slightly heavier application:

Full disclosure: I ran a few errands in the heat and drank a bit of water while wearing this, and it disappeared within 30 minutes. It looked pretty good before I went outside, though. Once again I'm wearing Milky Violet on my cheeks; my eyeshadow is Maybelline Bad to the Bronze, which is somehow still functional after two years. 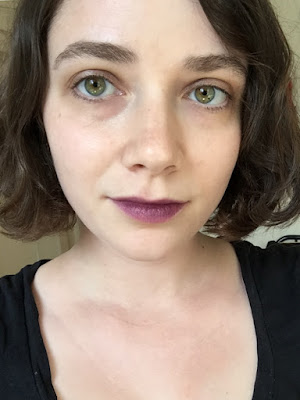 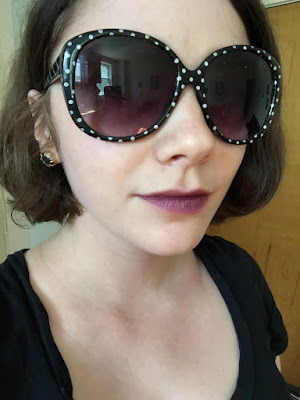 Of course, there's something '20s about this lip color, too. I don't think this is the last time you'll see that decade reflected in my blog this summer.

Face Stockholm Paris and Revlon Barcelona Nights are almost exactly the same color, and their formulas make them both ideal for summer heat and humidity. Paris is pigmented and creamy enough not to melt off my face immediately, while Barcelona Nights' glossy translucency tones down the bright pink into a casual daytime shade. The Revlon Moisture Stains may not do much staining, but if you think of them as glosses instead of stains, you'll be impressed by their longevity.

And yes, I still think a polka-dot top requires a complement of pink lips. 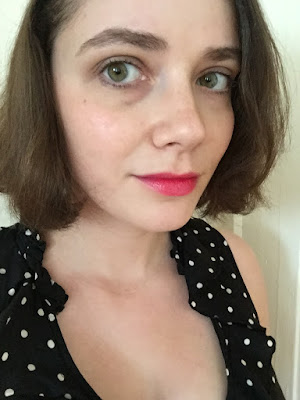 Have you found any neglected treasures in your personal archives recently?
Posted by auxiliary beauty at 11:23 PM