I Went (Mostly) Vegan for a Week! Here's What Happened

Last week I went vegan, with the exception of the occasional splash of milk in my coffee (I'm sorry, non-dairy milk is not the same). I'd been meaning to do this experiment for at least a year, but something always came up. Either I had a lot of cheese in my fridge that I needed to eat before it spoiled, or there was a new cheese-based recipe that I wanted to try, or I started thinking what a shame it would be if I was hit by a bus during my vegan week and died without having tried every kind of cheese available at Whole Foods. I really like cheese, guys. Last month, though, I resolved that my vegan week would start as soon as I returned from the UK. It was perfect timing: there were no dairy products in my apartment and I simply refrained from buying new ones.

There were a few reasons why I decided to dabble in veganism. The first was ethical. I've been mostly vegetarian for five years, also for ethical reasons; I eat fish about once a month and meat a few times a year, when I'm craving it so badly that I dream about it. I try to ensure that my milk, eggs, and other animal-based foods come from responsible sources, but there's no way to be absolutely certain, and what about the non-vegan foods that I don't make myself? In general, I have no idea where the eggs, milk, and cheese in those products come from. Factory farming is a blight on both sustainability and morality and is more common in the US than elsewhere, and I'd like to limit my support of it as much as possible. The only certain way to do that is by avoiding animal-based foods. 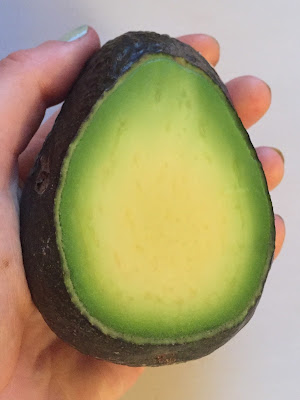 The second reason was aesthetic. I've been dealing with an unaccustomed number of breakouts for six months now, and I have yet to pinpoint the source. I've heard that some people's skin just starts to suck at some point in their twenties, and that may be the case for me, since I haven't changed my skincare regimen recently (though I did run out of all my usual products back in December and couldn't afford to replace them for about a month). Whatever the reason for my breakouts, they're decidedly unnerving: I'm used to having clear, unproblematic skin, damn it! I hoped that eliminating dairy from my diet for a week might help, given that my lactose intolerance gets worse every year: these days I can't have creamy coffee drinks or eat more than one scoop of ice cream at a time. Also in the aesthetic category: I'd been eating a lot of delicious desserts in England and my pants had started to feel awfully tight.

The third reason was pure curiosity. I like setting myself challenges, and this one seemed pretty formidable. Switching to more-or-less-vegetarianism in 2010 was barely a challenge, since I didn't eat much meat to begin with. But I love dairy. Fresh noodles with olive oil and Parmesan is my favorite dinner in the world. Carrot cake with cream-cheese frosting is my favorite dessert. The vegan fruit crisp from my local health-food store tastes better with whipped cream on top. And imagine, just imagine, passing a Mister Softee truck in New York and not ordering a vanilla soft-serve cone with rainbow sprinkles. That goes against everything I believe in. 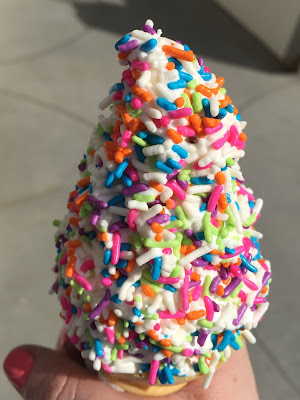 But it would only be a week, and I'd overdosed on dairy in England anyway, so I was ready for a break. I did have a few slip-ups over the course of the week: a lemon-poppyseed scone, a few pieces of milk chocolate, and a tiny free sample of mozzarella panini at Whole Foods. For the most part, though, I stuck to my new regimen. I even started drinking some of my coffee black! This was especially easy when I cold-brewed it overnight, since the cold-brewing process got rid of the coffee's acidic qualities.

Here are some of the dishes I made during my vegan week, plus notes: 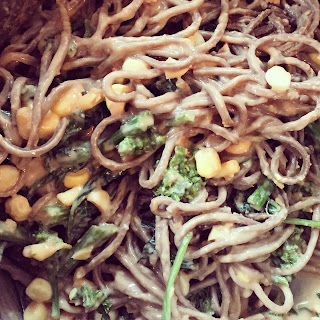 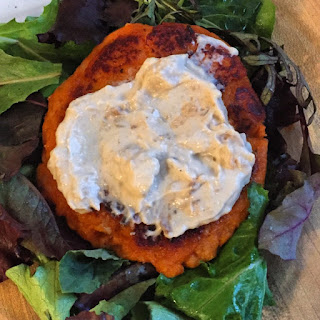 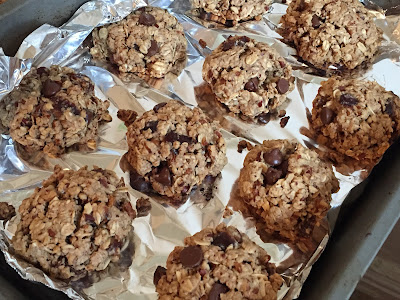 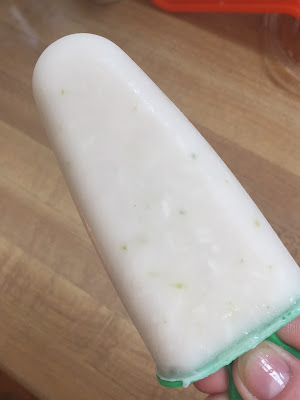 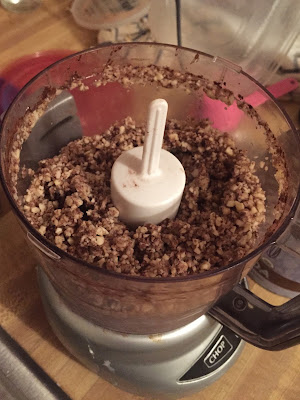 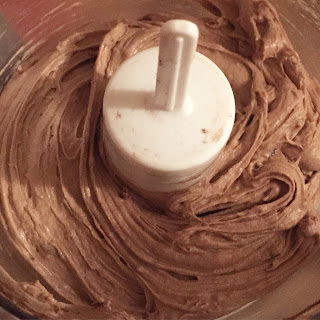 The week wasn't all banana-based epiphanies, though. In fact, it was harder to adjust than I'd expected. The most obvious change, at least for the first few days, was that I felt hungry almost constantly, no matter how much I ate. I wasn't sure whether the hunger was physical or psychological: was I really not getting enough calories, or was my body reacting to the prospect of not getting enough calories in the future? The constant hunger subsided midweek, but my overall feeling of deprivation lingered.

I also realized that veganism is a rich person's game, or at least a upper-middle-class person's game. The building blocks of veganism (rice, beans, peanut butter, vegetable oil) are cheap, but if you want to achieve a varied and interesting diet, you'll have to shell out. I didn't even bother with vegan prepared foods (except Ciao Bella chocolate sorbet, which I've been buying for years). Avocados are perhaps the best substitutes for butter or cheese, but they're also more expensive. In my own part of the world, the standard price is $2 each, and one avocado lasts me one or two days. For about $4, on the other hand, I can buy several months' worth of butter or a week's worth of cheese. Nuts are an important source of protein in a vegan diet, but peanuts are the only cheap nuts I can think of (and they're technically legumes, anyway). I bought 1 3/4 cups of pecan pieces for this recipe; that came to $7, and would have been even more expensive if I'd followed the recipe faithfully and bought pecan halves.


Now, we residents of the developed world have had our palates hyper-refined by years of chemically engineered flavors, and we could all stand to simplify our tastes. But few people become vegan in order to achieve a better-tasting diet. To live as a vegan, you have to be deeply committed to improving either the environment or your health, to the extent that losing out on a variety of flavors isn't an issue. I'm convinced that long-term vegans genuinely forget what non-vegan food tastes like, or else we wouldn't have a host of vegan bloggers swearing up and down that carrot-romaine juice is a perfect substitute for chocolate milk. I feel the same way about vegan food as I do about makeup dupes: you need to appreciate the the thing for what it is instead of endlessly seeking substitutes for your desired non-vegan dishes (or lipsticks). I came across a recipe for "avocado quesadillas" the other day: literally fried tortillas with avocado inside. No true quesadilla devotee could eat that and declare herself satisfied. 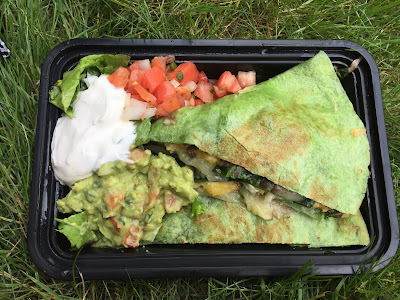 This black-bean-plantain quesadilla I had yesterday was absolutely delicious, and I'd say that 75% of its deliciousness came from the cheese. A tortilla filled with black beans and plantains would also have been tasty, but it wouldn't have been a quesadilla. Why not celebrate plant-based food for what it does taste like, instead of pretending that it tastes like something else?

I checked out some vegan blogs in my quest for new and interesting recipes, and I came to dislike the aura of self-righteous smugness that hangs over certain vegan communities. Remember when vegetarians were allowed to feel smug? It's been a while. These days it's all about "clean eating," but everyone has a different definition of this phrase and a different sense of which ingredients, and thus which people, are in violation of the code. Quite a few vegan blogs seem to be hives of zealotry and infighting, with commenters coming to blows over whether agave syrup is really an acceptable substitute for honey. It's all very neurotic, and no wonder: if you're vegan, you spend a lot of time thinking about what you can't eat. Having suffered from anorexia for several years as a preteen and young teenager, I roll my eyes particularly hard at any talk of "eating clean" or "eliminating toxins," phrases that could have come straight from a pro-ana LiveJournal community circa 2003. There's no such thing as "clean" food when fruits and vegetables literally come from dirt, and there's no ethical consumption in late capitalism. Or do you want to talk about the living conditions of the laborers who harvest your produce? Adopt whatever diet you like, but go lighter on the judgment, please.

Now for the positives! I did notice my skin changing for the better. It started to look less dull, with no new breakouts, and there were a couple of days when I was actually glowing. As soon as I reverted to my previous diet, my skin problems returned. I can't attribute that entirely to dairy, since my period is approaching and my skin always gets worse in the week leading up to it, but there has to be some correlation. I might eventually go vegan for an entire month to get a better sense of whether my issues are hormonal or diet-related. In the meantime, I should probably go to a dermatologist, ugh.

As for my second aesthetic reason, I don't weigh myself for fear of getting obsessed with numbers, so I can't say exactly how much my weight changed. My sense is that it stayed pretty much the same. It may have dropped slightly, but that could also have been hormonal--and again, a week is far too brief to measure this sort of thing. If I'd lost a significant amount of weight in a single week, that would have been a problem!

It probably won't surprise you to learn that I don't plan to return to full veganism anytime soon. However, a curious thing has happened. It's been three days since my vegan week ended, and I find myself eating animal-based foods far less often than I thought I would. Knowing that I'm allowed non-vegan options makes me feel less deprived when I do choose vegan food, and I've been choosing it a lot. It's amazing how many flavors and textures can be derived solely from plants! My goal for the next month is to be mostly vegan, with an emphasis on consuming as little dairy as possible. This means that I can't give myself a handy label, and we modern types do love labeling ourselves. I suppose what I'm aiming for is a version of Mark Bittman's "vegan before 6" plan, except that I might be vegan after 6 some days. You can't categorize me, man!

Needless to say, this is the theme song of this post.
Posted by auxiliary beauty at 11:35 AM