A Journey Through Purge-atory, Part 2: Eyeshadows and One More Lipstick

Greetings from a cramped hotel room on Manhattan's Upper West Side! This endearingly unhip neighborhood is special to me because of the time I spent in a history program at Columbia in the summer before my junior year of college. It was my first experience of New York as an adult (if nineteen counts), and I feel tremendous nostalgia for that summer of awkward dates, Zabar's frozen yogurt eaten on the front steps of brownstones, solo trips to the Museum of Natural History and the Morris-Jumel Mansion, and nerdgasmic encounters with Alexander Hamilton's actual signature holy shit at the New-York Historical Society. Strolling the Upper West Side this week, I had the sensation of meeting my past self (even more of an insufferable bluestocking than my present self, if you can believe it) around every corner. I like revisiting familiar cities more than I like visiting new ones, and part of it must be an egotistical desire to find the bits of myself that I left there last time—the old hopes, obsessions, and attachments. 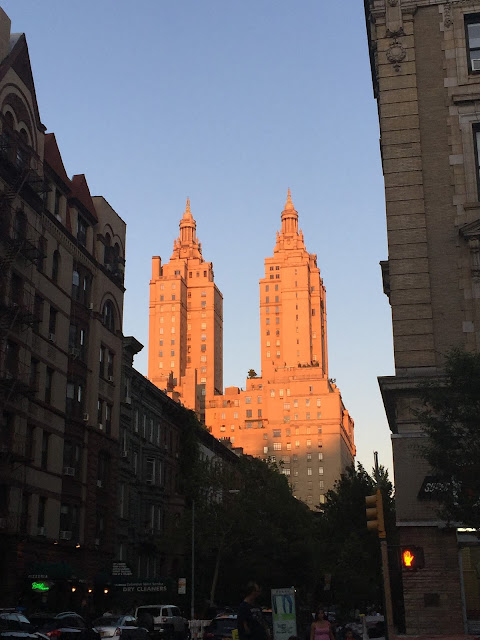 Unfortunately, the hotel where my mom and I have been staying for the past two days will not linger in my memory in quite the same way. I'm not really sure where to begin. The person smoking weed in the next room? The rollaway bed whose metal frame has stabbed into my ribs and spine for two consecutive nights? The uncanny resemblance between the view from our window and the set of Rear Window? 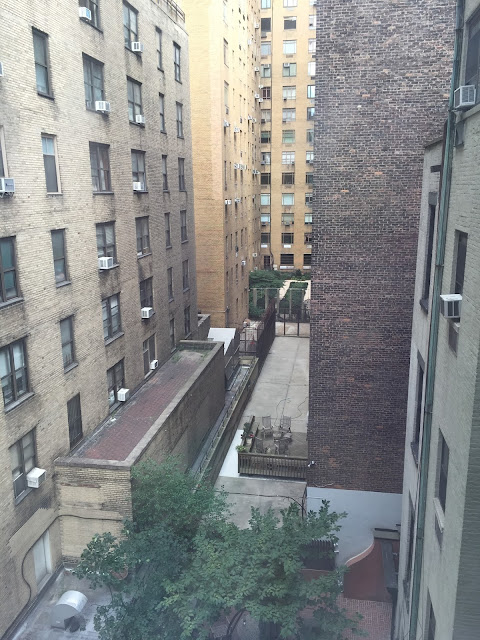 I like that last part, actually. But to distract myself from everything else, I'll finish a post I began before leaving home: the second installment of my Journey through Purge-atory. In my ongoing quest to lighten my makeup load before my move at the end of August, I'm getting rid of a few eyeshadows that have either reached the end of their natural lives or failed to become a part of my routine. I've never had a huge eyeshadow collection to begin with, so this post should be fairly short. Clockwise from top: Maybelline Eye Studio Color Explosion quint in Forest Fury, Maybelline Color Tattoo in Tough as Taupe, Milani Bella Eyes in Bella Charcoal. 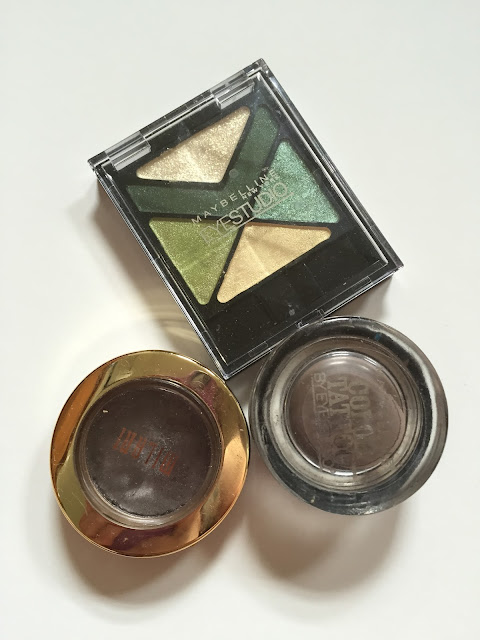 Maybelline Forest Fury was a gift from my mom over a year ago, but I swatched it for the first time while writing this post. I almost never wear greens and yellows on my eyes, and I just don't like how this palette is put together. Some of the colors might tempt me on their own, but the whole quint seems worse than the sum of its parts. It looks like a national flag, not like something I should be wearing on my face. 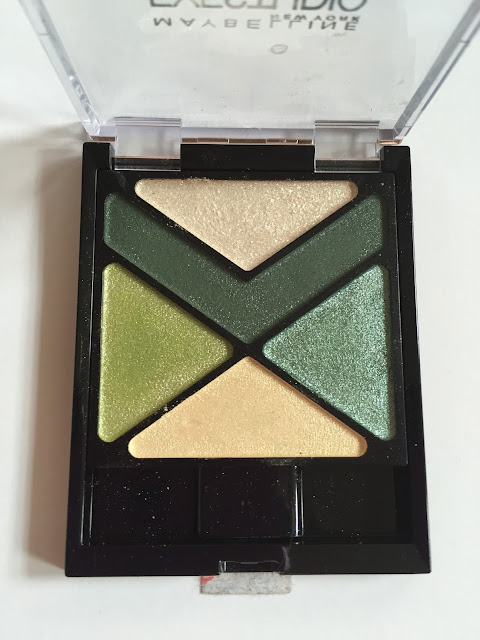 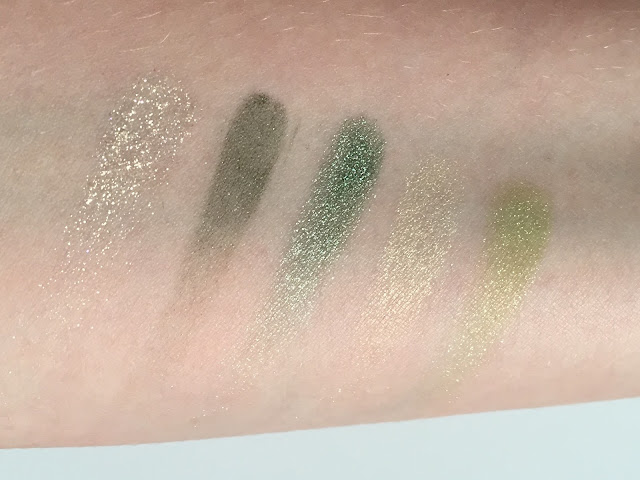 A funny thing happened when I swatched the five shades, though: I started thinking of ways to use them. I was especially drawn to the pale yellow glitter (top panel in the palette, far left on my arm); it reminds me of the glitter in Japanese eyeshadow palettes, which is meant to be patted over the other shades for some sophisticated flash. I'm also liking that acid green on the far right, even though I doubt it will do anything for my eyes or complexion. This quint might linger in purge-atory for a bit longer before I toss it for good.

Maybelline Tough as Taupe had a beautiful silky texture when I first bought it last year, but it quickly dried out. I can't explain why Bad to the Bronze is still perfectly usable after two years and Tough as Taupe is stiff and unblendable after just one, but maybe it has to do with Tough as Taupe's completely matte finish. 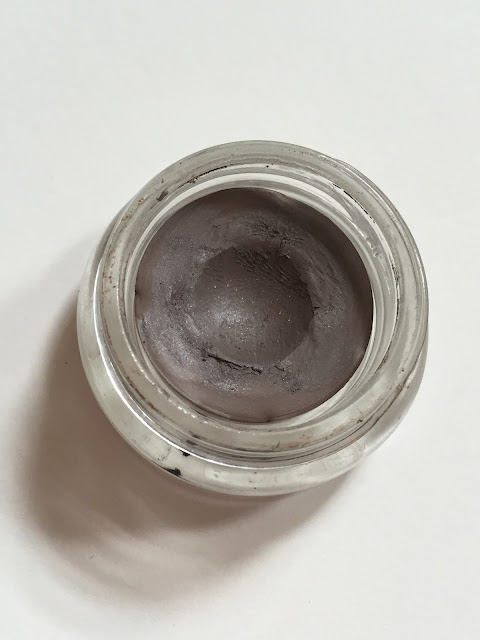 Even at its best, I didn't use Tough as Taupe very often, except as a base for sheerer colors. On its own, it was kind of blah—a straight-up warmish gray with no distinguishing features. I'm all for simple, neutral eyeshadows, but "neutral" doesn't have to mean "boring," and Tough as Taupe is boring. Also, in case you're wondering, the rumors are false: this eyeshadow doesn't work for contouring. It's the right color for a cool-toned contour, but it's much too thick to blend realistically into the face.

When I bought four Milani Bella Eyes eyeshadows last summer, I was most excited about Bella Charcoal, a shimmery silver-taupe with flecks of other colors. But the domed part of the shadow broke off in my makeup bag, leaving a cratered surface that I eventually smoothed with the help of rubbing alcohol. 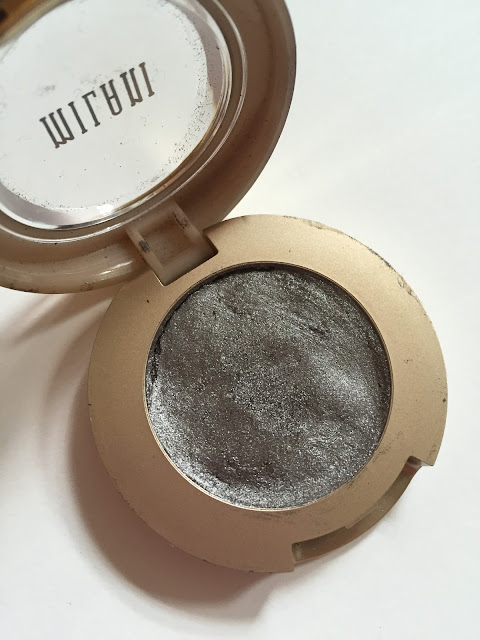 Bella Charcoal wasn't a great product before its metamorphosis, and in its altered state, it still applies imperfectly and it looks sad and battered. Do not want.

Last of all, a lipstick that failed to make it into my first purge-atory post: Revlon Black Cherry. Yes, it's a "cult classic," but I don't need to tell you that cults have made some bad decisions. In fact, that's pretty much what they're known for. 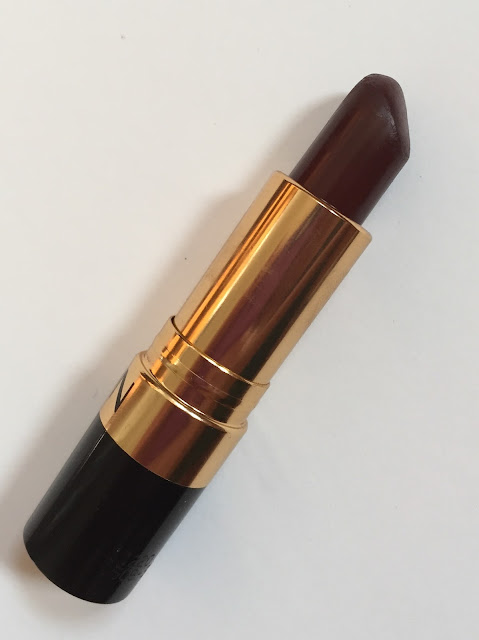 My understanding is that Black Cherry acquired its cult status back in the '90s, when there were fewer lipstick formulas available and you couldn't just hit up Google and find ten color dupes with vastly superior formulas. In 2015, there's no reason to settle for a lipstick that applies unevenly and bleeds outside liplines, especially when said lipstick is an extremely dupeable shade of dark reddish plum. 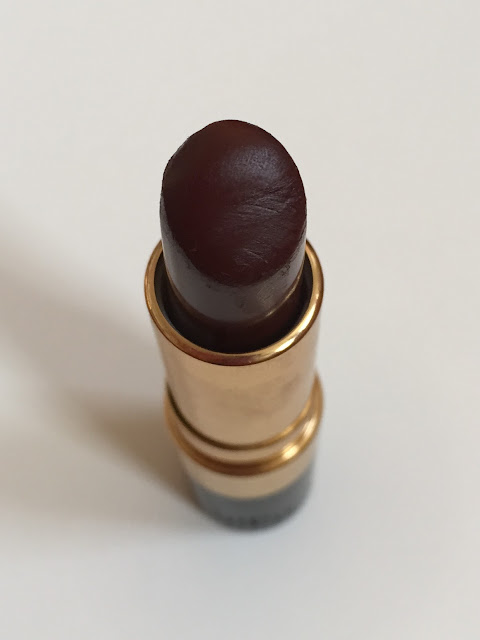 Applied over my ColourPop lip primer, Black Cherry doesn't look too bad (that darker spot in the middle is an especially dry patch that no lipstick could hide), but I'm still not convinced that I need to keep this one. Or do I?

Ugh, writing this post has only increased my ambivalence about getting rid of this stuff. I'm useless.

Now to prepare for another day of travel: we're visiting my grandmother in Florida for a few days, then heading back to San Francisco. See you when I see you.
Posted by auxiliary beauty at 11:21 PM