Notes: After my last post, which took me forever to write, I thought I'd clear my palate with a quick installment of my Lipstick Chronology, now approaching its end: this is the penultimate post! I started my blog in early 2014, so all the lipsticks I've bought since then have been faithfully chronicled in real time. I've left a few out of the chronology either because I gave them away before they could be reviewed, or because I'm about to give them away and don't want to swatch them excessively before I pass them on to someone else. When I've finished the chronology, I'll write up a final stock-taking post, cataloging all the lipsticks I own and deciding which ones to keep (I've already purged a few). 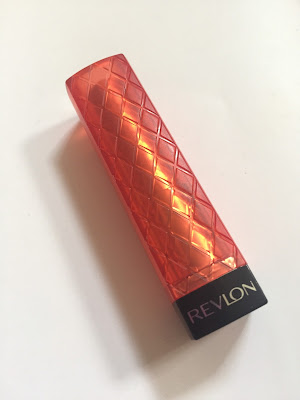 Candy Apple is an orange-red semi-sheer lipstick, scentless and flavorless. It's not a bright orange-red; rather, it has a darkened, toned-down quality, much like Topshop Rio Rio. I might even call it the sheer version of Rio Rio. Granted, my lips tend to mute and darken bright lipsticks, but even in the tube, Candy Apple is pretty subdued. It contains no shimmer and isn't particularly glossy, but it does have a squishy jellied finish. Here's how much I have left; the product is sweating due to the humidity (which is welcome to leave whenever it wants, seriously). 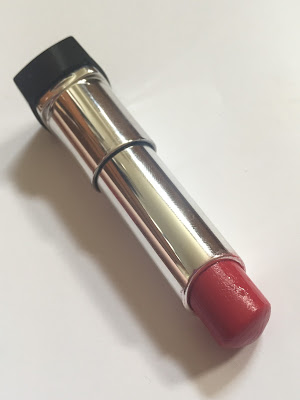 I've mentioned that Revlon's Lip Butters vary wildly in opacity, lasting power, and lipfeel. Raspberry Pie is opaque, but it doesn't last long and it tends to bleed (ColourPop's lip primer has been a godsend for this one). Pink Truffle is nearly opaque and it doesn't bleed, but it's somewhat drying. Tutti Frutti, a yellow-based orange, was the sheerest of the bunch, and so melty that I had to throw it out. Candy Apple, the fourth Lip Butter I tried, immediately became my favorite of the four. It's less opaque than Raspberry Pie, but it still packs a lot of color. It applies and fades evenly. It lasts longer than you'd expect a sheer lipstick to last. Basically, if you're going to get a Lip Butter, get Candy Apple (or Red Velvet). 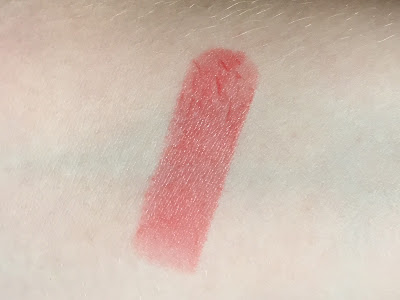 Because of its sheerness, Candy Apple looks more natural against my complexion than opaque oranges and warm reds do. I wore it a lot last summer, though this summer has been all about the purple lips (I'm this close to ordering MAC Heroine).

Here it is swatched between Maybelline Vibrant Mandarin (left) and Topshop Rio Rio (right). See how Vibrant Mandarin has a bright white base that Candy Apple and Rio Rio lack? Also, this photo makes me realize that CA isn't that much sheerer than VM, which is not marketed as a sheer lipstick... 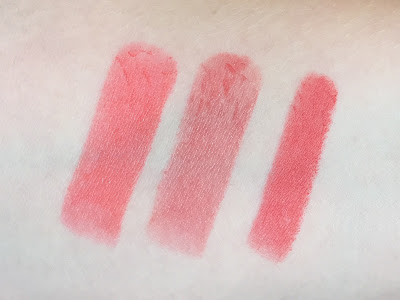 In putting together a look with Candy Apple, I think I was inspired subconsciously by this 1935 lipstick ad, which I pinned some time ago. Talk about strobing: 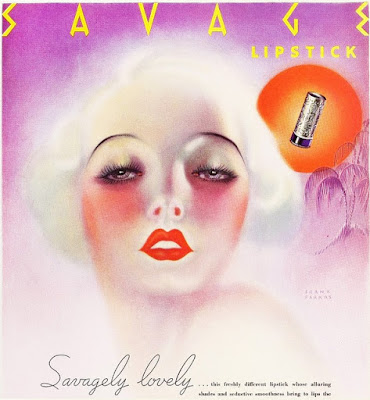 I wish I'd actually studied the ad before constructing my look, because that blush placement is fascinating. I'd like to try it another time. For now, here's what I came up with. My lips were particularly dry that day, but under a layer of Candy Apple, they looked and felt as healthy as ever. 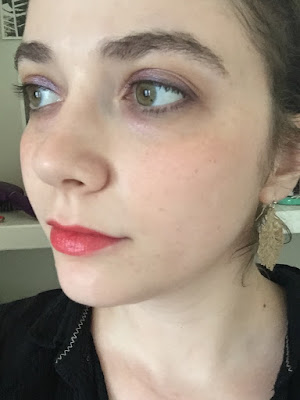 More color than I usually wear at once, but I like it! Purple and orange harmonize surprisingly well together. For some reason, though, wearing both warm and cool tones in the same look makes me feel more "made up" than wearing one temperature all over my face. 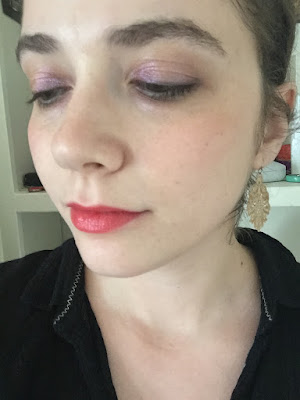 My eye makeup is Topshop Chameleon Glow in Wax + Wane, a bronze/blue/fuchsia trichrome beauty, with theBalm Sleek smudged into my lashlines. And my blush is Revlon Candy Apple! Yes, the Lip Butter formula makes a decent, if slightly sticky, cream blush. I got that tip from the comment section of an xoVain article (spot the egregious typo in the headline). It would be a great beauty resource if not for most of the writers, you know?

Candy Apple was one of several lipstick purchases that I made in Washington during the 2013-2014 school year, when I commuted to the Folger Shakespeare Library each month for a dissertation seminar. My mode of transportation was the Amtrak Northeast Corridor, and the first time I opened and used Candy Apple was on an evening ride back from Washington: the same evening, in fact, when I discovered that Amtrak served booze. I felt like a Hitchcock heroine as I sipped my whiskey and ginger ale from the cafe car and swiped on my new orange-red lipstick. 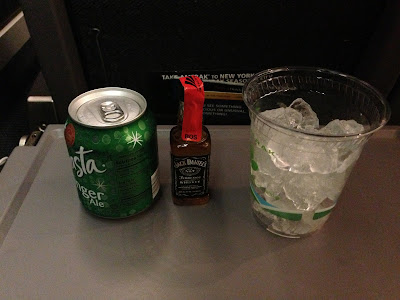 I remember my train journeys with fondness, and wearing Candy Apple always evokes those hours spent reading articles about Renaissance printing presses, poking at my first dissertation chapter, taking poorly lit train selfies, and updating this very blog. But the tragic Amtrak derailment in May, on the same route I took every month, has cast a specter over those memories. It's one of those sobering near-misses you encounter in life: given the infrastructure problems that have plagued Amtrak for decades now, the crash could easily have happened last year instead of this year. I feel immensely lucky that the worst problem I ever faced during my commute was a weather-related delay of a few hours.

Since starting this blog, I've been thinking a lot about the memories and associations that a single object, like a lipstick, can absorb and even come to stand for. I've been thinking about how objects outlast us, in boxes or drawers or landfills. I've been thinking, while working at the archives this summer, how temporary my intervention in the fate of these papers really is: it's me against the void that consumed the writers of the letters and will one day consume me, too. I'm trying to draw a neat conclusion from all this, something that will end this post with a flourish; but sometimes there are no neat conclusions to be drawn, and you put on a lipstick and let the feelings come.
Posted by auxiliary beauty at 11:55 PM