I Have a Plum Problem: MAC x Giambattista Valli Eugenie

By ordering Eugenie, a matte plum lipstick from the six-piece MAC x Giambattista Valli collection, I broke four of my cardinal makeup-buying rules:
Now, you may protest—and rightly so—that I've broken all of these rules since starting my blog. Fair enough, but it's rare that I break all of them at once for a single product. So what was it about Eugenie that compelled me to make my first MAC purchase in two years? 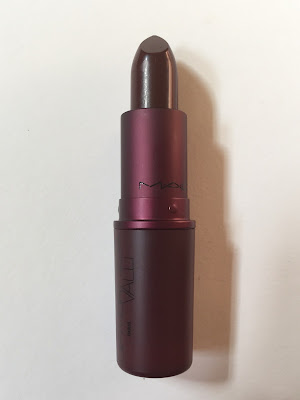 The Giambattista Valli collection comprises five bold matte lipsticks—peach, white-pink, fuchsia, red, and plum—and one sparkly clear gloss in a pot. Each item is named after a woman dear to Valli; Eugenie's namesake is the Greek shipping heiress Eugenie Niarchos. The name means something very different to me: my undergraduate advisor is named Eugene (not that I ever called him by his first name; perish the thought). It's a little strange to think of him every time I use this lipstick, but he's one of my favorite people in the world, so it could be worse. He once ran into me in the campus coffee shop and handed me a photo of his cat. "Keep it," he said, and I did. It's hard to sum up a person in a single anecdote, but that one is pretty representative. Note also that his cat was named after the Renaissance poet Torquato Tasso.


In an interview with Refinery29, Valli explains the aesthetic behind his MAC collection: "The colors are a bit like the ABCs of Giambattista Valli—the reds, the pinks, the fuchsias, and the corals. They're colors that always belong to the house and the imagination of the house." Apparently, MAC has been doing the makeup for Giambattista Valli's fashion shows since the house launched its first collection in 2005, so a collaboration was only natural. Valli is not a designer I've ever followed closely, though I do love the way he uses color, rendering fairytale silhouettes in unlikely neons:


And his F/W 2012 collection was neo-Elizabethan perfection: very Orlando. It's a shame that he didn't succeed in bringing back the ruff.


I wouldn't have said no to one of the butterfly-bedecked full-head veils from that season, either: 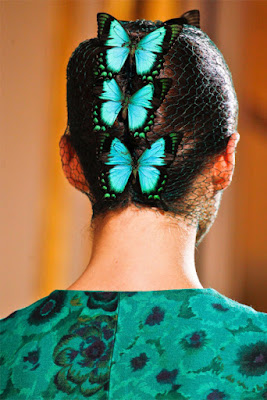 In all these photos, you can see the same tone-on-tone color play that distinguishes the lipsticks in Valli's MAC collection. Knowing MAC's love for whimsical packaging, I'm surprised that the lipstick tubes came out so simple and streamlined (no butterflies?), but I'm not complaining.


I first heard about the Valli collection at the end of last year, when posts like this one began making the rounds. I've seen a lot of MAC limited-edition packaging come and go: the water droplets of Alluring Aquatics; the cartoon-covered tubes and pans of the Simpsons, Archie, and Wonder Woman collections; the ombre tie-dye of Proenza Schouler. But this was the first MAC collection whose aesthetic really captured my attention. I filed the lipsticks into one of my mental folders reserved for makeup wishlists, and went about my business for the next eight months.

As the release date approached, though, my congenital skepticism kicked in. I avoid limited-edition collections in general, and MAC ones in particular, because of the time pressure they place on customers. I like to deliberate over my makeup purchases, but LE collections are designed to make us snap up items for fear of missing out on something good. Granted, some brands do keep their seasonal collections on shelves for months and add beloved LE items to their permanent lines. MAC, however, fosters a more anxious consumer experience. The brand releases at least a dozen collections per year, all of which sell out within days or sometimes hours. And because MAC knows that it has thousands of devoted fangirls and -boys who will buy pretty much any LE item, the seasonal and themed collections often sacrifice quality or creativity for sheer buy-it-nowness. I don't like watching the online feeding frenzy, and until this month, I'd never been tempted to participate in it. Makeup is my hobby; I don't want it to become yet another source of stress.

So I checked the reviews as they trickled out, and decided that if I could have any lipstick from the collection, it would be Eugenie. (Tats, Charlotte, and Margherita were too similar to colors I already owned, and Bianca B looked like it would flatter absolutely no one.) But I refused to wake up at an absurd hour on the release date to place my order; I just made a mental note to check the MAC website at some point on the morning of July 9. If the collection had sold out, no big deal; if not, I'd buy Eugenie. Then my sieve-like short-term memory let slip the mental note, and I completely forgot about the release date, remembering only that the lipsticks were coming out in the second week of July.

On the fateful morning, I was in the basement of the university archives, taking a break from filing letters and newspaper clippings from the early 1930s. The Bureau of Milk Publicity in Albany must have been one hell of a place to work: 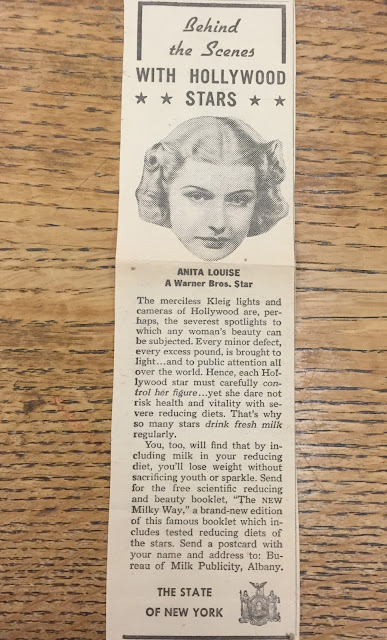 On a whim, I navigated over to the MAC website and discovered that the Valli lipsticks were all available. Not knowing how long they had been or would be online, I ordered Eugenie, noticing that the site was moving very slowly and each page needed to be refreshed a couple of times. Later that day, I checked Specktra and found complaint after complaint: the collection had sold out almost immediately, the new website hadn't worked properly, it was unclear whether the lipsticks would be restocked, and brazen Instagram and eBay resellers were already legion. In fact, it seemed that Eugenie had sold out minutes after I'd ordered it; I must have scored one of the last few. I started to understand why LE collections hold so much appeal: there's an undeniable childish thrill in knowing that you have something lots of other people want.

A few days passed, and Eugenie arrived on my doorstep. I was very excited, and I took many photos. The packaging was even more perfect than I'd been led to believe. Not only did the box sport a grayscale rendition of the flowers from the promotional images... 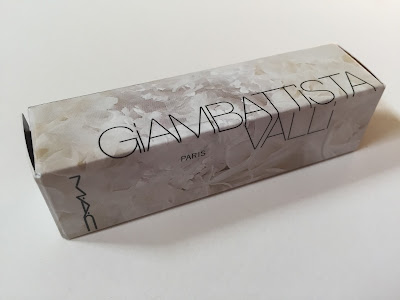 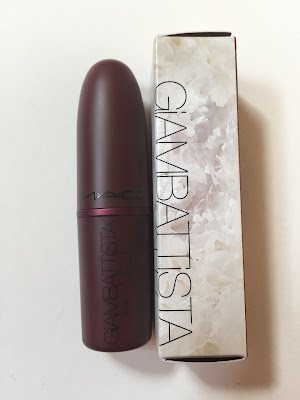 ...but the box's lining and bottom panel matched the color of the lipstick. If that's not classy, folks, I don't know what is. 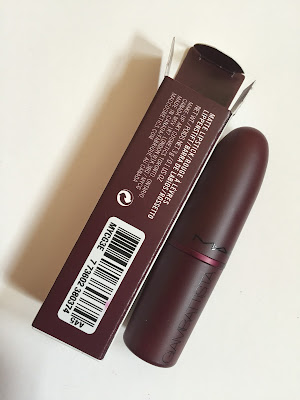 MAC describes Eugenie as a "dark cherry with blue undertones." It's a little more purple than the color most of us imagine when we hear "dark cherry," but it has a fair amount of red as well—and, come to think of it, the darkest cherries do lean purple. 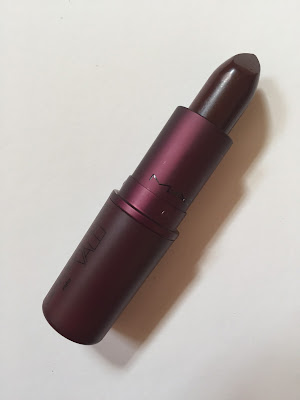 Eugenie is the second matte MAC lipstick I've tried (the first being Candy Yum-Yum). I love Candy Yum-Yum's formula, but Eugenie is a little drier and more powdery; if you've tried the Retro Matte formula, it's closer to that than to the traditional (or, rather, modern?) MAC mattes. My lips are especially parched at the moment, because the archive where I work is kept cool and dry to prevent the papers from decaying: talk about unexpected workplace hazards. Eugenie doesn't do much to disguise or soothe the dry bits, but it also doesn't desiccate my lips further. I'd recommend applying Eugenie over balm if you suffer from dry lips. 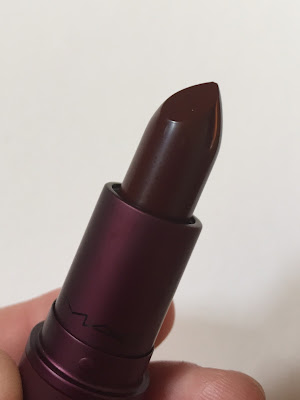 Arm swatch. Look at that rich, bright plum! It makes me impatient for fall. 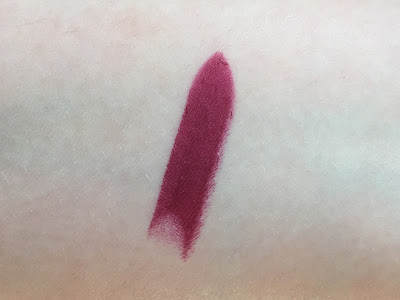 It looks a bit redder and darker on my lips. I've been thinking recently how strange it is that disembodied lip swatches are de rigueur on beauty blogs when no one in polite society actually gets such a close view of your mouth. But here's a lip swatch anyway: 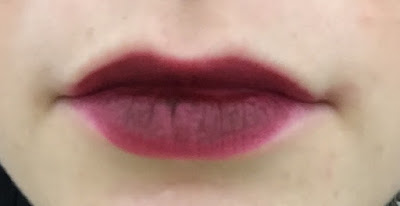 Did I need Eugenie? Well, no: I have more plum lipsticks than any other color. But makeup is unnecessary by definition, and as I've said before, I'd rather own multiple shades of a flattering color than buy an unflattering one to fill a gap in my collection. Here's Eugenie swatched with just a few of its plummy cousins. Left to right: Revlon Black Cherry, Eugenie, Topshop Get Me Bodied, YSL Belle de Rose. 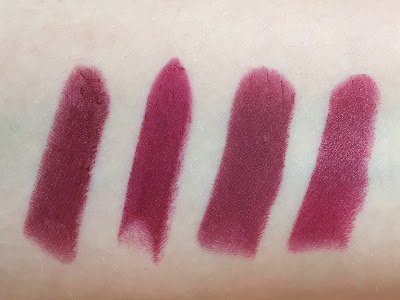 I expected Eugenie and Get Me Bodied to be pretty much identical, but Eugenie is noticeably brighter and cooler. The real color resemblance here is between Eugenie and Belle de Rose, though BDR has a much shinier finish. Also, how did Black Cherry escape my first Journey through Purge-atory? I never wear it because it's so slippery and uneven.

Here's Eugenie with my Inglot gold duo and Illamasqua Zygomatic blush. I'll probably return later and replace this photo with a better one; I took this selfie in a post-shower hurry and didn't have time to perfect my angles (or wait for my hair to dry). 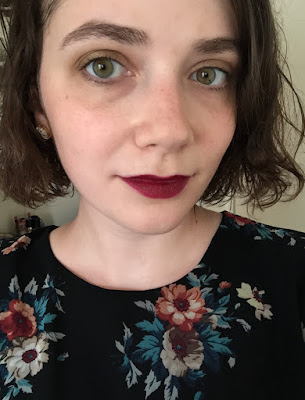 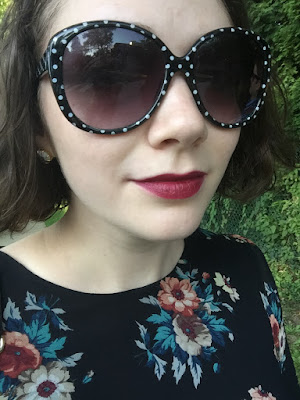 And here is where the story turns tragic, and where I become the very embodiment of #firstworldproblems. Eugenie's first excursion into public was to a cocktail bar a ten-minute walk from my building. Because I'd been there innumerable times over the past two years without getting carded, I'd fallen out of the habit of bringing my ID—which meant, of course, that a new bartender saw fit to card me that night. Despite my protestations that I was a regular, the dude stood firm, and I had to slog back to my apartment. As I approached my building, I fumbled in my purse, and

I picked it up and inspected the damage. It was slightly scratched and dented, but in my agitation I concluded that it was ruined. I actually cried. I'd bought this lipstick for its gorgeous tube, I'd waited on tenterhooks for it to arrive in the mail, and now I'd fucked it up like the clumsy ass I was. But, on further reflection (and after a couple of cocktails back at the bar), I realized that I'd learned a few valuable lessons that night. If you're as accident-prone as I am, you really shouldn't buy makeup for its packaging. When all is said and done, lipstick is a bit of goo inside a piece of plastic, and probably not worth crying over. Always take your ID to bars, even if you're a haggard grad student who is so obviously over 21 that it hurts. Oh, and Eugenie is a pretty great lipstick.

Did you get anything from the Giambattista Valli collection? What do you think of limited-edition collections in general?
Posted by auxiliary beauty at 11:10 PM