If you distilled all of 2015's lip-color trends into a single product, you'd come up with Milani Amore Matte Lip Creme in Crush. 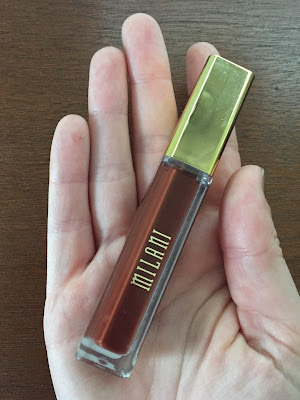 Crush ticks all the boxes: it's a dark brown (check) liquid lipstick (check) that dries to a flat matte finish (check). Interestingly, it's also a marriage of high-end and low-end trends. Matte liquid lipsticks have been everywhere in the last couple of years, but the brands popularizing them have been largely indie or drugstore brands: NYX, Lime Crime, ColourPop, Kat Von D, Jeffree Star, LA Splash, and now Milani. Kat Von D is the obvious outlier in that list—her Everlasting Liquid Lipsticks go for $19 at Sephora—but as befits a former tattoo artist, she pays more attention to street style and Instagram than to runways. The trend is trickling upward, though: MAC is releasing its own line of Retro Matte Liquid Lipsticks this fall, and who knows what other brands will launch their boats on the liquid matte river?

I'm not sure how I feel about the super-matte look. I love matte lipstick, as any reader of this blog is well aware. But there's a difference between the look of conventional matte lipstick, which usually has a hint of shine to give it depth, and the powdery look of liquid mattes. The flatter the finish of a lipstick, the more saturated the color appears. This is fine if your base makeup is also super-matte, but I never wear foundation and prefer a dewy look for my skin, so I don't necessarily want a lip color that reflects no light at all. I wonder if this is yet another trend designed to look better in Instagram selfies than in real life.

Brown, on the other hand, has gained a following outside Instagram. Brown lip color has been creeping back into fashion for a few years, softened by sheer formulas or artfully disguised in brick reds and plums. This year, though, it feels no need to hide. Since late 2014, almost every new lipstick range, high- or low-end, has included at least one true brown. NARS Audacious has Deborah; the recent MAC matte collection has Antique Velvet; Chanel's fall collection has Mélancolie [and the Infinite Sadness]; Urban Decay Matte Revolution has 1993, which I swatched out of curiosity at the San Francisco Ulta a few weeks ago:


1993 is a true '90s brown, midtone and warm, but my own tastes run to deeper, vampier browns. Beyoncé's presence at the 2014 Met Gala was overshadowed by her sister's elevator attack on Jay-Z, but her gorgeous makeup deserves to be remembered: 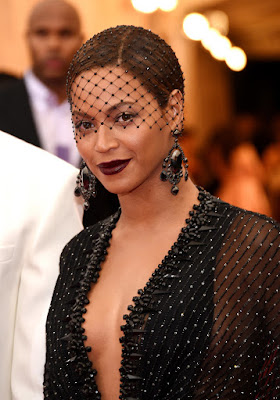 Looking back over press reports from the 2014 gala, I notice an odd reluctance to describe Beyoncé's lipstick as "brown" instead of "aubergine" or "burgundy." Yes, the color has hints of red and plum, but it's brown, people. Nor is it "goth," to quote one source; it's meant to evoke the '20s or '30s, in line with the 2014 Met Gala's Charles James theme. This is the kind of brown lipstick I favor. I don't mind lighter browns if they're a bit sheer, like Revlon Coy; but if I'm going to wear an opaque brown, I want it to be more Beyoncé than Cindy Crawford.

This is not to say that no one wore dark brown lipstick in the '90s: I know that MAC's Film Noir was a popular color back then. My sense is that lighter browns were everyday shades and dark browns like Film Noir were suitable for evening. The very name of the lipstick suggests that the '90s saw the color as slightly other: a retro, not modern, brown. Even after picking up Crush in New York, I toyed with buying Film Noir or Antique Velvet, going so far as to swatch them at the MAC store next to the cable-car turnaround in downtown San Francisco:


But thrift and common sense prevailed: I felt sure I wouldn't wear a dark brown lipstick more than a handful of times, so I contented myself with Crush.

So, a bit about Milani's Amore Matte Lip Cremes. There are eight shades in the limited-edition line: three nude/mauve pinks, one bright red, and three vamps. They're available on Milani's website and at Walgreens and Duane Reade stores; my understanding is that they're not sold anywhere else, though I could be wrong about this. (Update, 10/5: I just saw a display of them at my local CVS, so yes, I was wrong.) Milani charges $8.99 for them, but I paid less than that at Duane Reade: not more than $7, as I recall. Also, on a pedantic note: I heard about these lipsticks back in July, when very few bloggers had reviewed them. The scarcity of written reviews led me into a territory I usually avoid: the dark realm of YouTube vloggers. The first thing I noticed about the video reviews was that almost no one pronounced "Amore Matte" correctly. Milani claims to be "inspired by Milan," and the Italian amore has three syllables. But almost without exception, the YouTube reviewers pronounced the word "a-moor," like the French amour. Come on, people! If a brand has sent you an entire range of lipsticks for free, the least you can do is pronounce the name correctly! But I digress. 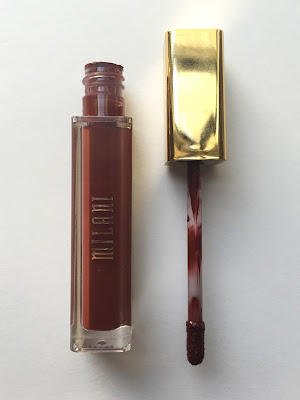 Crush has a thin formula, not watery but not exactly creamy, either. There's a strong, sweet scent that reminds me of a root-beer float, of all things. The brown color may have contributed to this impression, but I can't un-smell it now, even if I close my eyes and think of fuchsia. The scent fades quickly after application, and I don't dislike it, but it certainly makes itself known when I open the tube.

Milani describes Crush as a "warm brick brown," which is about right: it's a very dark brown with a bit of red and plum. It's a very close dupe for Antique Velvet, actually, though I think AV is a touch cooler. For comparison's sake, I've swatched my entire collection of brown lipsticks, first in shade, then in direct sunlight. Left to right: Maybelline Crazy for Coffee, Milani Crush, NYX Enamored, Revlon Coy. 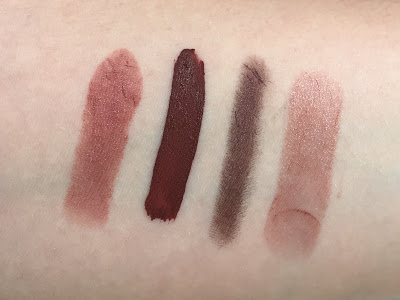 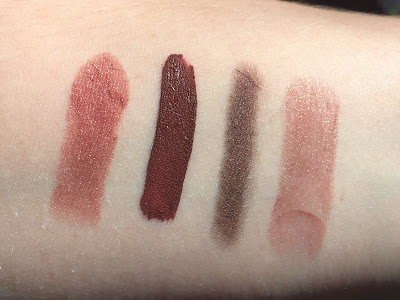 Crazy for Coffee and Coy fall into the subtle "rosewood" category. Crush is just about as dark as Enamored, but it's much redder. One coat gives me near-total opacity with just a bit of streakiness; I find that I need two coats to make the color look even. This arm swatch is a single pass: 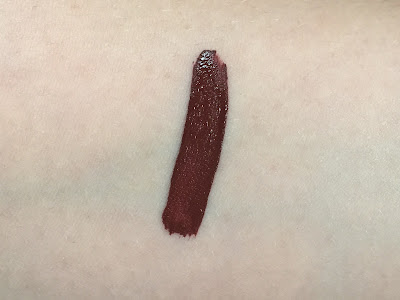 One layer of Crush on my lips—my front-facing camera didn't manage to pick up the slight patchiness, but I promise it's there: 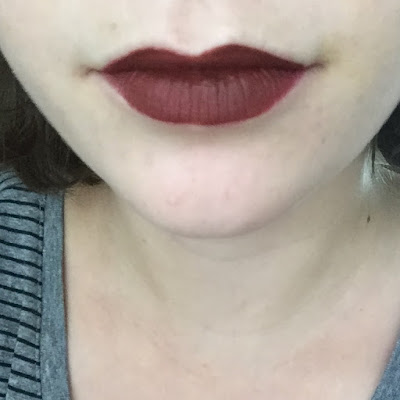 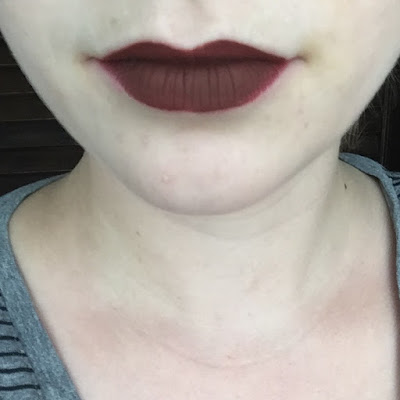 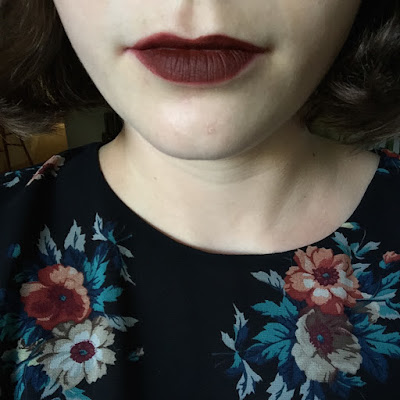 As I'm sure you can tell from these photos, I have some difficulty applying Crush (hence my oft-broken rule: no liquid lipsticks, damn it). The color is very dark, the formula dries down to matte in just a minute or two, and the applicator doesn't produce the most precise of lines. I always find myself doing a bit of hasty finger-smoothing to ensure that the color doesn't creep outside my lips and the shape doesn't look wonky as hell; my upper lip is especially challenging because it's so small. For me, the best technique is applying one coat, letting it dry, then brushing on another. If you're used to liquid lipsticks, applying Crush might not be a problem for you, but it certainly is for me.

I'd heard a lot about the longevity of liquid matte lipsticks, so I was eager to put Crush to the test. I wore it to my mom's birthday dinner at the Slanted Door—can you believe she's lived in San Francisco since 1995 and had never been there until this month? Since I was wearing a vaguely '70s-esque dress on our outing (high neck, flowing sleeves, big floral pattern), I went a bit '70s with my eye makeup, using Maybelline Bad to the Bronze and one of the deep browns (Silly, I believe) in theBalm's Nude 'tude palette. In retrospect, I think I could have done a more colorful eye to complement Crush: plum and green would both look nice with the deep brown. 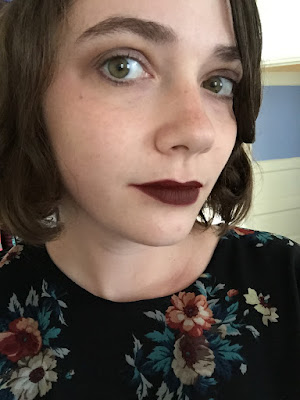 Like Enamored, this color is challenging for me to wear because it makes me look incredibly pale. I mean, I am pale, and I don't mind being pale, but the pure dark brown can give an ashen cast to my skin if I'm not careful. That said, I put it on today with no other makeup (I'm in the process of moving into a new apartment, so Looks have fallen by the wayside), and I was surprised that it didn't look horrible. Maybe the light was good or something. 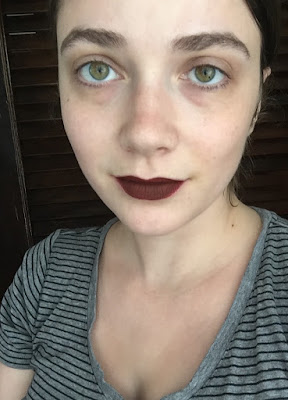 At the Slanted Door, Crush stood up to my water and cocktail: there wasn't the slightest trace of lipstick on either glass. After a few bites of food, though, I could tell that the color was coming off. I glanced in the mirror after the appetizer and noticed that quite a lot of the lipstick had disappeared from the center of my mouth. It wasn't pretty, and I was forced to wipe off the rest, which was a task in itself; I feel sorry for the person who had to wash my napkin after that dinner. Crush is also not terribly comfortable to wear. It's not as drying as Enamored, but it's not a lightweight product, either. When I retested it today, I had to take it off after a couple of hours because my lips felt so dry. Dabbing my mouth with a tissue did nothing, and I discovered that Crush really needs to be removed with an oil or balm (I ended up using Palmer's cocoa-butter lip balm).

My verdict: meh. I'm certainly not tempted to buy another liquid-matte lipstick, and I'd return this one if I still had the receipt. My biggest issue with Crush is that it doesn't fade naturally. It seems to come off in chunks, so it needs to be removed before eating—fine, except that the removal process takes as much time as the application process. Another problem with the formula is the lack of versatility. A traditional lipstick can be sheered out, used as a blush, blended with other colors, or worked into the lips as a stain. Even a liquid lipstick with a satin finish leaves some room for experimentation. But there's only one way to wear Crush: on its own, on the lips, at full opacity. I usually wear my lipsticks at full opacity anyway, but it's nice to feel like I have some control over the color saturation, and Crush seems to have a mind of its own. Maybe it's just too scientifically advanced for me. Will the AI takeover begin with liquid lipstick? I shudder to think.

By the way, I still want Antique Velvet.
Posted by auxiliary beauty at 6:13 PM