We're almost a week into August, but do you really care? I don't.

I've had this lipstick for two years and I'm still not sure if it flatters me. How is that possible? I don't even know. I can never predict how I'll feel about it when I put it on: sometimes I'm surprised at how well it suits my coloring, and sometimes I feel so clownish that I have to wipe it off immediately. But every time I start thinking about getting rid of it, I fall in love with it all over again. Candy Yum-Yum has one of the most comfortable yet long-lasting matte formulas I've ever tried, and the stain left when it wears off is almost prettier than the lipstick itself. 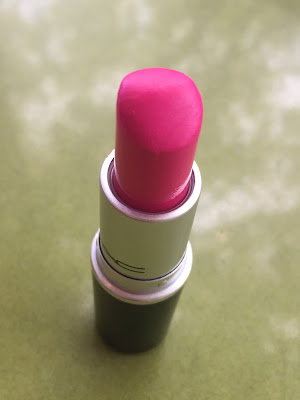 I surprised myself by reaching for Candy Yum-Yum more often than usual last month. The heat and humidity had reached unbearable levels, and there were very few products that I could trust not to melt off my face during my ten-minute walk to campus. I took to wearing just mascara, highlighter, and a bold matte lipstick. My lips can strip the neon from almost any color, but CYY manages to maintain its glow when I'm wearing it: 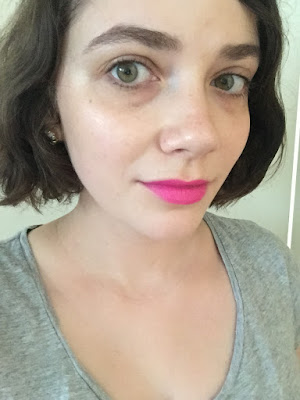 I suspect that super-bright lip colors like Candy Yum-Yum will look dated in a couple of years, given the recent popularity of '90s-inspired browns. And though I'd like to say I don't care about trends, I do like feeling fashionable, if not wear-all-the-crop-tops trendy. Right now, we seem to be in a transitional period in which no lipstick color looks truly outré so long as it comes in a matte or semi-matte formula, but the tide seems to be shifting toward deep neutral shades like the one I'll review in my next post (omg foreshadowing). I want to enjoy Candy Yum-Yum while it's still acceptable in polite society—or, at least, polite enough for the likes of me.

2. Maybelline Bad to the Bronze and theBalm Silly

Bad to the Bronze is the only eyeshadow I own that can withstand the suffocating dampness of an East Coast summer. End of story. 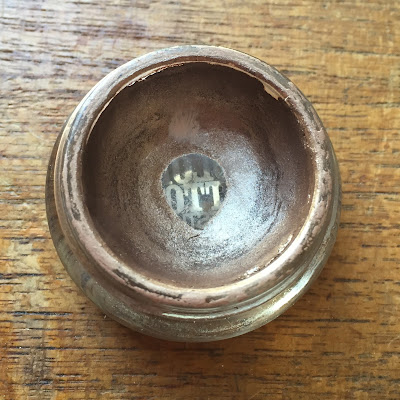 I've had it for over two years now, and though it's a bit drier than it used to be, it still applies and blends smoothly. And once it's on, it's going nowhere. I wore it for an entire 90-degree day followed by a run outside, and it still looked like this when I came back from running (apologies for sweaty post-workout photo, but there's no other way to prove my point): 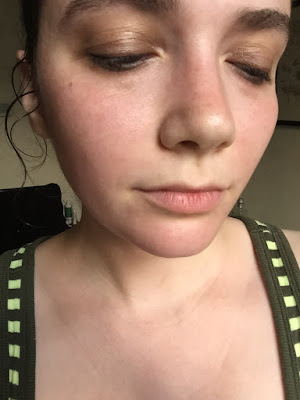 I often wear Bad to the Bronze as a lid wash with no embellishment, but when I want a bit more emphasis on my eyes, I use Silly, a warmish dark brown with copper glitter from theBalm's Nude 'tude palette. Silly is not a perfect shadow: it's dry and powdery, and the glitter seems to vanish after application. The thing is, I don't really care. Should I care? Meh. Silly will be part of this palette whether I like it or not, so I might as well make the effort to appreciate it. 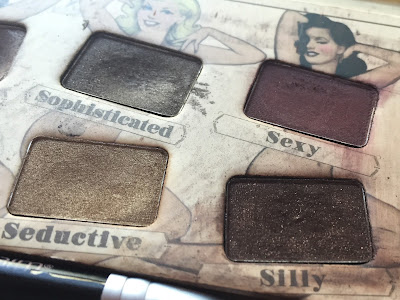 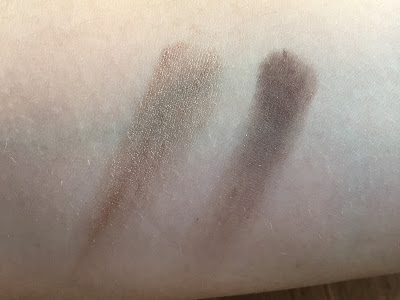 By the way, I'd never wear Bad to the Bronze or Silly with Candy Yum-Yum. According to my neurotic unwritten makeup rules, fuchsia lipstick is suited to a bare or cool-toned eye only.

Since I can't find this particular pair of earrings on the website, I'm not sure how to refer to the color. Holographic? Cyborgian? 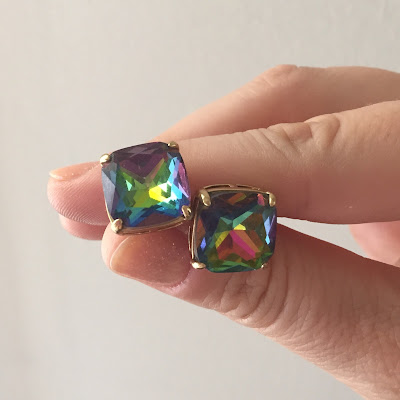 At Nordstrom last summer, I came across a pair of smaller rectangular Kate Spade earrings in this color (colorway? how does one refer to it?), but didn't buy them because I don't like buying things on a whim. Shortly thereafter (but too late to go back to the Nordstrom in question), I regretted that decision. I looked for the earrings online, couldn't find them, and felt bummed about it for an entire year, until I wandered into the Kate Spade store and saw these. They contain so many colors that they match almost everything I wear (I say, as if navy isn't the most colorful my shirts get), and they look especially great with, you guessed it, Candy Yum-Yum.

By the way, I just made the mistake of looking at the Kate Spade website, and now I want these eye earrings to go with the Tatty Devine red-lips necklace I never wear. I have a thing for clothing and jewelry adorned with body parts.

Like everyone else, I've consumed a lot of post-apocalyptic films and novels in the last few years. Only a few situations can cause the total collapse of society and only a few situations can emerge from that collapse, and I like to see how writers construct—or don't construct—original narratives from such a small selection of tropes and scenarios. (See also the Dystopian YA Novel twitter: "My tunic is stained and torn. I have never been this far from the Colony before.")

Russell Hoban's Riddley Walker was published in 1979, long before the current vogue for post-apocalyptic fiction. The novel takes place in South East England two millennia after a nuclear war. British society around the town of Cambry (formerly Canterbury) consists of a loose confederation of scavenger tribes ruled by men from "the Ram," a strip of land across the river. Ram-approved religious mythology and political propaganda are disseminated through Punch-and-Judy-style puppet shows. Twelve-year-old Riddley Walker's father is the community "connexion man," whose job it is to interpret the puppet shows for the audience. After his father dies while helping delegates from the Ram unearth a decayed pre-apocalyptic machine,  Riddley stumbles upon a plot to recover the lost art of nuclear fission. It sounds weird, and it is weird, but somehow it works. It works especially well if you're prepared for a novel written entirely in a pseudo-Chaucerian dialect:

Raining agen it wer nex morning. Theres rains and rains. This 1 wer coming down in a way as
took the hart and hoap out of you ther wer a kynd of brilyants in the grey it wer too hard it wer
too else it made you feal like all the tracks in the worl wer out paths nor not a 1 to bring you
back. Wel of coarse they are but it dont all ways feal that way.

Novels in dialect can turn precious, and Riddley Walker certainly has its precious moments. It's also very much of its time: you can tell that a novel was written in 1970s England when it portrays a world recovering slowly from nuclear war, plague, and total social and linguistic collapse, and the characters still somehow have tea and marijuana. But the book is well worth reading, especially if you enjoyed the post-apocalyptic parts of David Mitchell's Cloud Atlas and want to see where that dialect came from.

By the way, I'm always open to recommendations for post-apocalyptic novels. I finished Station Eleven earlier this year (imperfect but very enjoyable), and I'm thinking about reading Margaret Atwood's MaddAddam trilogy next. But, you know, "trilogy" is such a daunting word.

My mom was eager to see this exhibit at the Museum of Modern Art during our visit to New York. She still blames Yoko Ono for breaking up the Beatles, and I think she wanted to do the museum version of hate-reading or hate-following—gathering material to reinforce her 45-year-old grudge. But she came away impressed despite herself, and so did I (not despite myself). I knew almost nothing of Ono's art before I saw the MoMA exhibit, and I was surprised at how verbal it was. Many of the pieces were more like poems: I especially enjoyed Grapefruit, a collection of bizarre instructions for the creation of art objects or installations. Some of the instructions were impossible to carry out... 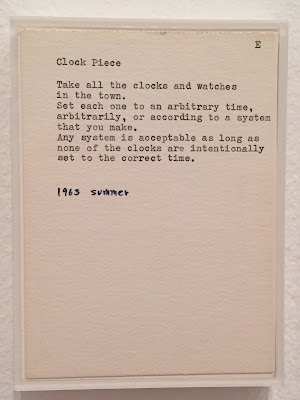 ...while others, alas, were all too easy. 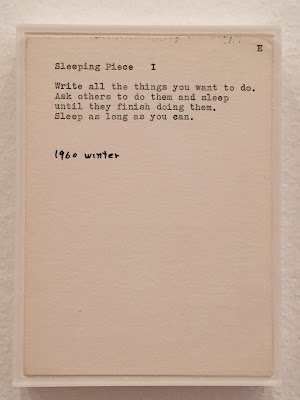 The exhibit runs through Sep. 7, and I'd highly recommend seeing it if you happen to be in New York.

I've managed to amass three new lipsticks and two new nail polishes in the last two weeks, so expect some reviews soon. For now, it's time for me to construct a "sleeping piece" of my own. Maybe you could write a few blog posts for me while I'm asleep? And finish my dissertation chapter on John Donne? Great, thanks.

Posted by auxiliary beauty at 1:28 AM