As you know, I'm going on the academic job market this fall. Accordingly, I'm now interviewing lipsticks for the position of Interview Lipstick. Am I doing this to put off compiling my job materials? Maybe, but there's no denying that first impressions are important.

Academia has no set dress code. In fact, most rules in academia are unwritten. You're expected to just know, through intuition or social osmosis, how to structure an article, where to sit during a seminar presentation, and what to wear to an interview. I've encountered competing philosophies re: attire (and re: everything else, for that matter). Some people seem to think that a job candidate should skip makeup and wear an understated outfit in order to let her words do the talking. Others think it's an advantage to wear something that leaves an impression. Personally, I lean toward the second theory. My boyfriend tells me that when one of his advisers interviewed for her current job, she wore a teal suit that people still remember nearly 15 years later. I'm not sure I'm teal-suit confident, at least not yet, but I also don't want to look mousy and diffident. Too many grad students try to make themselves invisible. And for me, nothing is better for faking heightening confidence than high-heeled boots and a really nice lipstick. I want a lipstick that makes a statement, but not so much of a statement that it's all anyone remembers about me ("what was that goth-lipstick girl's dissertation about?"). 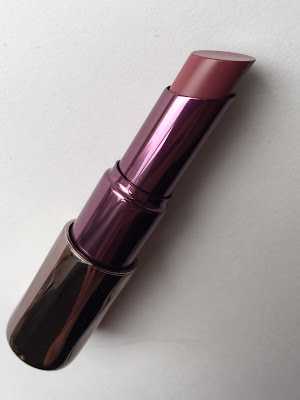 Rapture is my second Revolution lipstick; my first was peachy-pink Streak, which I bought in early 2014 and wore constantly this spring and summer. All the Revolution lipsticks have the same sleek, heavy, two-toned metal packaging: gray on the outside, purple on the inside. My tube of Streak is a bit problematic—the lipstick bullet wobbles in the tube when I apply it—but that must be a fluke, because Rapture's tube works beautifully. 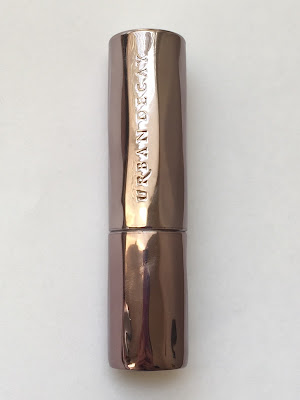 Rapture's color is also a better match for the Urban Decay packaging: 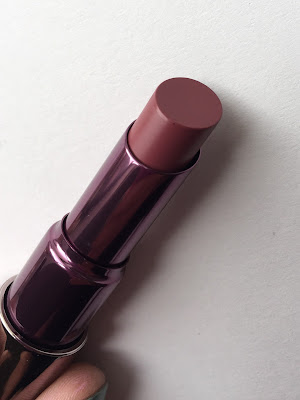 My mom was kind enough to buy me Rapture at San Francisco's brand-new Ulta store last week, despite her belief that I have quite enough lipsticks—which, yes, but that's not the point. I didn't have anything quite like Rapture, and I've wanted such a shade for a while: a cross between a vampy plum and a neutral MLBB. Let's call it MLBV: "my lips but vampier."

Before settling on Rapture, I considered a few different lipsticks in the purplish MLBV color family: NARS Anna (worn here), ColourPop Lumière, and OCC Lydia. But I didn't fancy experimenting with the temperamental Lip Tar formula or paying $32 for another Audacious lipstick, and you know how I feel about ColourPop. I was also superstitiously attracted to Rapture's name: who wouldn't want to enrapture a committee of interviewers? 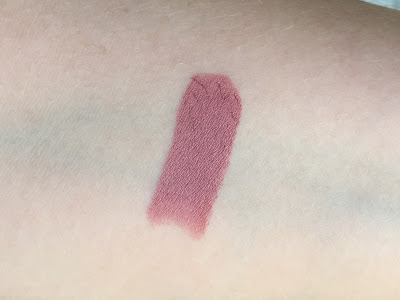 Color-wise, Rapture sits between two of my favorite lipsticks: MAC Up the Amp (brighter, cooler) and Revlon Sultry (warmer, redder). Left to right: Up the Amp, Rapture, Sultry. 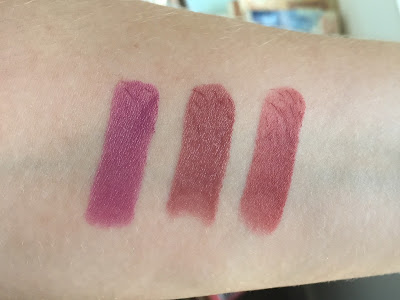 Whereas Streak is semi-sheer, Rapture is fully opaque, and it feels soft and creamy on my lips. The Revolution formula reminds me of MAC's Amplified formula: it's on the heavy side, it has a bit of sheen, and it wears off quickly with eating or drinking. The flat tip of the bullet makes application slightly difficult, especially on my smaller top lip; but Streak got worn into a more convenient shape with time, and I trust Rapture will, too. 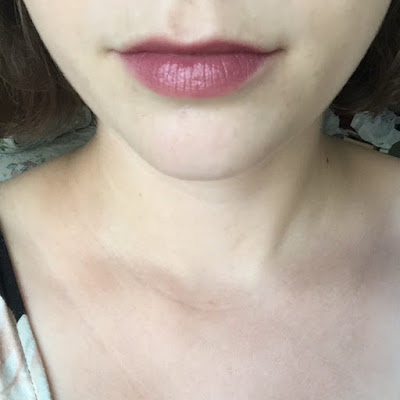 Rapture fits in perfectly with this year's nostalgia for the '90s (I've been scouring my childhood bedroom for my tattoo choker, but have found only butterfly clips and Velcro hair gems), so it makes sense that Urban Decay included a matching shade in its new line of blushes. I swatched a few of the blushes in the UK back in June; Rapture is the second swatch in the column on the left. 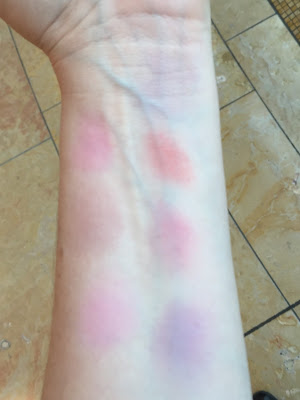 Rapture also comes in a sheer lipstick if you're into that kind of thing, but I'm not; I like my rapture opaque.

Here I've put together a professionalesque look with Rapture as the centerpiece. Along with concealer, mascara, and clear brow gel, I'm wearing ColourPop Bill (matte pinky-purple taupe) and theBalm Serious (matte black) on my eyes, and NARS Mata Hari on my cheeks. Please ignore my wet hair. 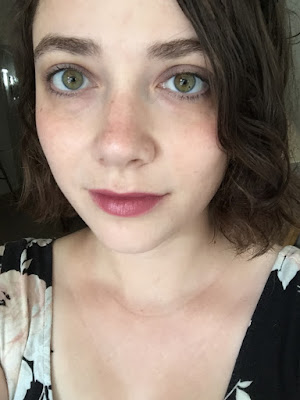 I've fallen in love with matte eyeshadows this year. I still don't like bright mattes, but neutral ones are just so versatile and unobtrusive, and that's really what I want from my eye makeup. I might as well admit it. 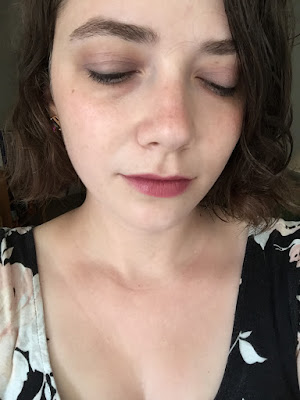 Outside, on one of the creepily LA-like hot sunny days we've been having: 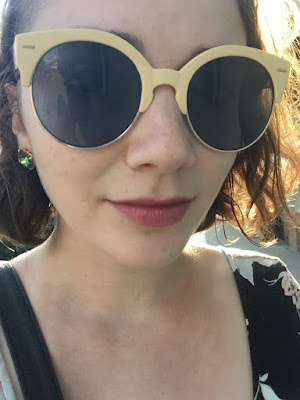 Overall, I'm delighted with Rapture, and I'd feel perfectly comfortable wearing it to an interview. My one fear, actually, is that it might not make enough of a statement. I suspect it will become my go-to teaching lipstick this semester; in the meantime, I'll interview a few other lipstick candidates. What are your thoughts on interview makeup?
Posted by auxiliary beauty at 7:48 PM