I don't wear much red lipstick. Is that a strange admission for a lipstick addict to make? Red is the iconic lip color, the color that we all think of when we hear the word "lipstick," yet it's rare that I reach for a true red: I prefer my reds sheer or burnt or plummy. When I wear bright red lipstick, I worry that I'm inadvertently advertising myself as a certain kind of person. In my mind, a red-lipped person is bold, friendly, outspoken. At a party, she's more likely to make conversation with strangers than to hide in the kitchen, her only companion a handful of pretzels. In other words, I've somehow gotten it into my head that red lipstick is reserved for extroverts and for introverts who can fake extroversion successfully. And, well, I can't always fake it. And if I can't fake it, I'd rather not be wearing a lipstick that suggests I can. I don't want my appearance to promise something that my personality can't deliver. Or maybe it's even sadder than that: I don't want my makeup to be disappointed in me.

Despite this neurosis, I recently developed a desire for a bright cherry-red lipstick with a glossy or satin finish. I've tried many pinkish-red lipsticks over the years: Revlon Certainly Red (the first lipstick I ever bought), MUFE Rouge Artist Intense #45, YSL Rouge Gouache, Wet n Wild Stoplight Red, NYX Bloody Mary and Chic Red. But the Revlon and MUFE went back to the store, the YSL got too little wear before it expired, and I gave the Wet n Wild and NYX lipsticks to friends. I probably should have concluded from all this that bright cool reds weren't for me. Instead, I concluded that I just hadn't found the right bright cool red. I was indulging in one of the worst delusions of the makeup junkie: Holy Grail thinking. But it's one thing to write a blog post decrying a certain delusion, and another thing to fend off said delusion when you're ill and tired and overworked and Urban Decay has taken 20% off its entire site for a Columbus Day sale. And so I ended up with Urban Decay's Revolution Lipstick in 69, a "bright red with pink undertone." 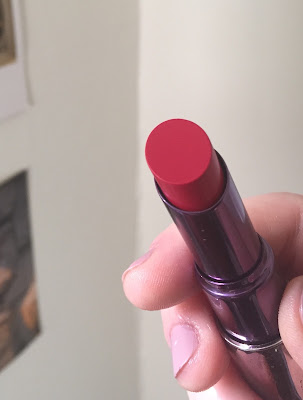 Prior to the sale, I'd spent a good deal of time vacillating between 69 and Bésame American Beauty, both $22. The Bésame lipsticks are nearly a gram larger than the UD Revolution lipsticks, but I'm so unlikely to finish any one lipstick that I tend to consider unit price instead of price per gram, and UD's sale price of $17.60 was certainly less than $22. (If you're more likely than I am to finish a lipstick, see Cheap as Fuck's latest post, which explains the sneaky tricks beauty brands play to make you think you're getting more lipstick per dollar.) Plus, I knew that I liked the Revolution formula, and 69 seemed closer than American Beauty to the Platonic red in my head. I had just two reservations about 69: the flatness of the bullet, which pretty much guaranteed I'd have to use a lip brush, and that fucking name. 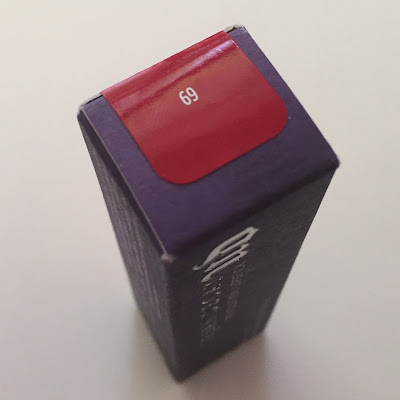 Now, listen. I am neither a prude nor a philistine. I'm fine with most representations of libertinage. I didn't bat an eye at NARS' Guy Bourdin collection two years ago. But I don't like the name of this lipstick—not because it's offensive, but because it's juvenile and dumb. If you put a 12-year-old boy in charge of coming up with lipstick names, "69" is the first name he'd think of. Compare two of the lipsticks from the Guy Bourdin collection, "Goodbye Emmanuelle" and "Last Tango," which were named after erotic films from the '70s. Those names reward research; they take on a new meaning after you've done your homework. "69" is so crude by comparison. To quote This Is Spinal Tap: "it's such a fine line between stupid and clever." But it turns out that for a 20% discount, I'm willing to overlook a stupid name. It's a good thing in life to know your own price. 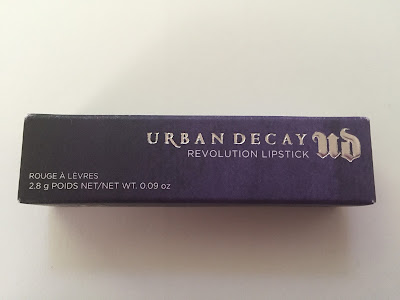 I love the lining of Urban Decay lipstick boxes. A minor detail, but such little touches really do help justify the higher cost for me. 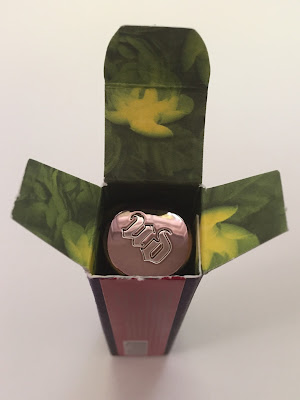 Good news: 69 is just the color I was looking for! It's a very bright, very opaque pinkish red with a glossy finish that fades to semi-matte. 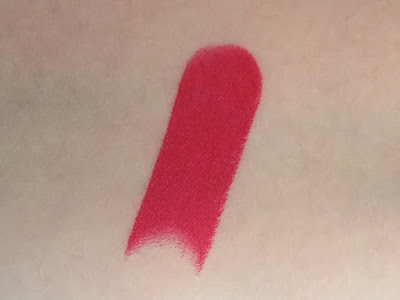 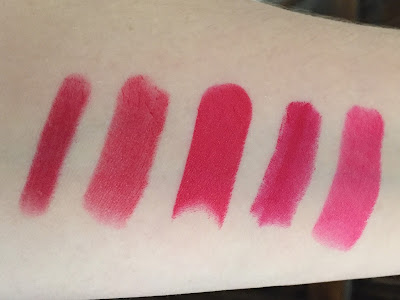 69 is definitely a lipstick-lover's lipstick. Not only is it bright and opaque, but as I feared, it's nearly impossible to apply without a lip brush. You might have better luck if your lips are larger than mine, but the broad, flat top of the Urban Decay lipstick doesn't play well with my thin upper lip. (A few weeks ago, a random person on Instagram advised me to "overline" my upper lip to make it look bigger. Gambit declined, madam.) It's easy enough to lay down the color with the tube, but I need a brush to define the shape and ensure that the lipstick isn't sneaking outside the borders of my mouth. I can't figure out why Urban Decay gave its lipsticks this shape; I mean, there's a reason that most lipstick bullets are pointy on top instead of flat. I'm almost tempted to slice off the top of this bullet to get a pointy edge, because going in with a lip brush is such a pain. 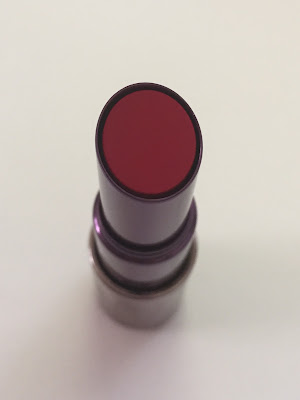 As with Streak, the bullet is a bit loose in the tube: I can feel it wobble when I pat it across my lips. This doesn't impact the lipstick's performance, but it's annoying—and considering that two of my three Revolution lipsticks have this flaw, it would seem to be a structural problem across the line. I actually considered returning 69 because of the wobbly bullet and the flat top, but in the end I couldn't bring myself to send it back. It's just so pretty and festive. Is there a more perfect holiday red? 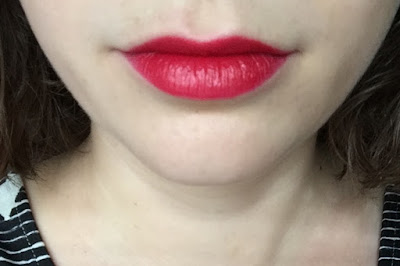 The Revolution formula is comfortable to wear but not exactly lightweight. It reminds me of MAC's Amplified formula: thick and creamy, with a tendency to come off on cups. (If lipstick often feathers on you, a lip liner might be a good idea with 69—and, in a truly extraordinary coincidence, Urban Decay makes a matching lip pencil.) Of my three Revolution lipsticks, I find that 69 is the longest-lasting and the most comfortable. I wore the super-matte NARS Mysterious Red for most of my birthday but put on 69 before dinner, and it was like removing a pair of tight jeans and slipping into yoga pants. The color also fades evenly, dwindling to this after several hours: 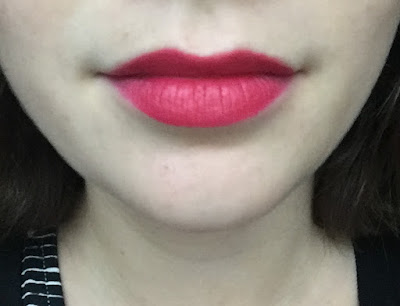 While taking photos for this post, I realized that I don't actually know what my undertone is. Depending on the lighting and the time of day, my complexion can look pinkish or warm or very pale olive. Am I just so white that I take on the quality of whatever light happens to be shining on me? 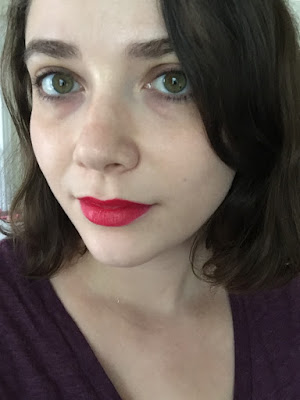 I think I'll keep calling myself "neutral leaning cool" and leave it at that. My veins do look blue and not green, after all. Obviously this issue matters a great deal. 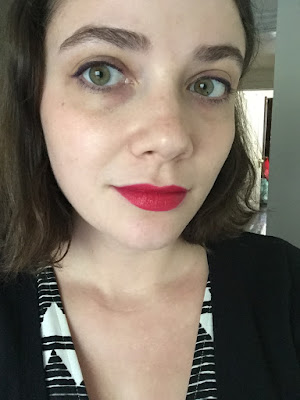 My makeup is almost identical in these two photos: concealer, mascara, Illamasqua Zygomatic blush, and a dark neutral color on my upper lashlines. In the second photo, I'm wearing Urban Decay 24/7 Velvet Glide-On Eye Pencil in Plushie, a dark purple. My package came with two samples of Plushie, which I think is being discontinued along with the other pencils in the Velvet range. I like the formula, though it could be a bit more opaque.

Will 69 turn me into a devoted wearer of red lipstick? I don't know, but I like it a lot. And writing this post has made me resolve never to feel outclassed by a lipstick again. Introverts can wear red lipstick too.

The theme song of this post is, of course, Hyuna's "Red." 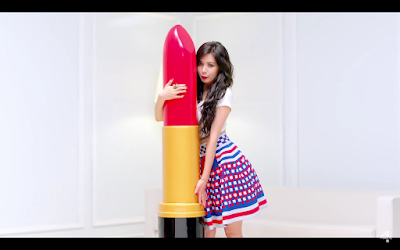 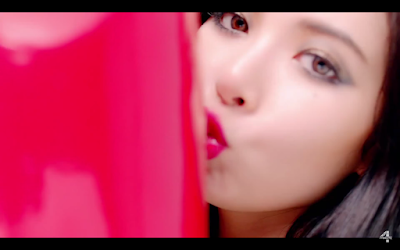 Posted by auxiliary beauty at 7:44 PM