Three weeks into my no-buy, I'm not feeling any great temptation to get something new, but I do find myself adding a worrisome number of items to my "buy in 2016" wishlist. In the interest of self-distraction, I think I'd better get back to reviewing the stuff I picked up during my stress-shopping phase in September and October. Introducing my newest blush (and, to my credit, one of only two blushes that I bought this year): Urban Decay Rapture. 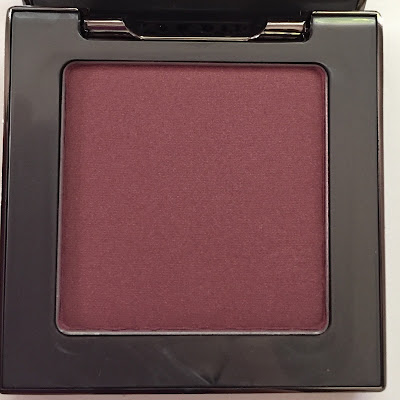 Despite my longtime devotion to all things plum, I didn't own a plum blush until Rapture. NARS Mata Hari is a medium cool pink with a slight plum tone, and Sleek Flushed is a warm berry red, but neither blush is quite purple enough to qualify for inclusion in my favorite makeup color category. So when Urban Decay had a sitewide 20%-off sale in October, I bought not only the Revolution Lipstick in 69, but also the blush version of Rapture, the lipstick I've been wearing constantly this fall. Rapture the lipstick has become such a necessity for me (dark enough to make an impression, neutral enough to look professional) that I couldn't imagine being disappointed in Rapture the blush. 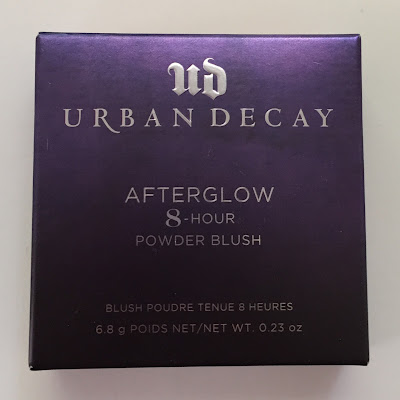 Rapture is part of Urban Decay's long-awaited Afterglow 8-Hour Powder Blush line, which came out this past summer. The Afterglow (eyeroll) blush that appealed to me first was Bittersweet, a bright true purple. But I couldn't justify spending $26 on a novelty color, so I ignored the Urban Decay blushes until this fall, when I started looking for a shade deeper than Mata Hari and more purple than Flushed. I was deciding between Rapture and NARS Sin, and then UD had a sale and NARS didn't, so here we are. 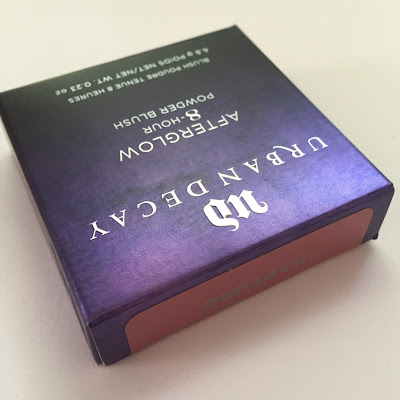 The blush compact itself walks the fine line between dystopian-kitschy-cool and (apologies to Ebony Dark'ness Dementia Raven Way) GOFFIK: 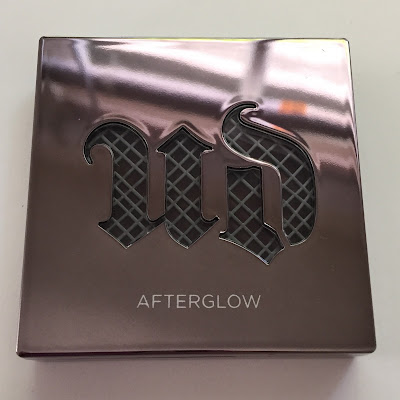 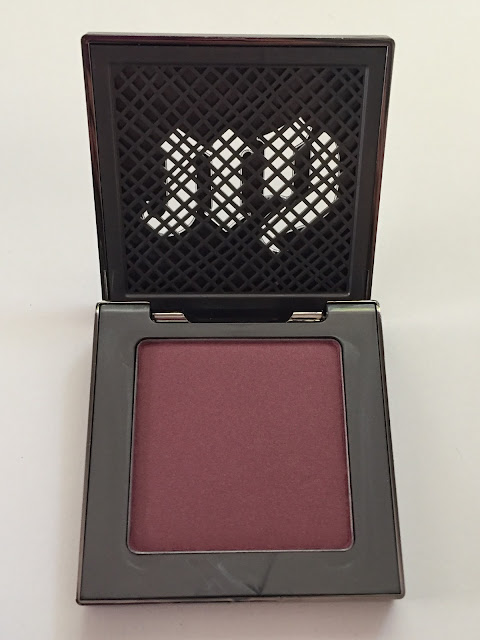 Honestly, though, I don't mind. So what if this blush looks like it comes straight from the set of the Divergent movies? I'm not of the faction that believes all adult makeup should be minimalist and tasteful. I love the look of Anna Sui's bird's-nest-topped nail polishes, Paul & Joe's cat-printed compacts, and YSL's gaudy '80s-tastic gold lipstick tubes. Too Faced's new heart-shaped blushes are really toeing the line between "foppish objet" and "toy makeup"—they look identical to some of the Polly Pocket sets I had in the '90s—but I'll give even them a pass. Sometimes I want to be sleek and fancy, but I also appreciate whimsical beauty products that capture a sense of play. We're literally drawing on our faces, people. We might as well admit it.

(What I don't love about Rapture's packaging is that the compact closes with a magnet instead of a clasp. This makes me uneasy: the magnet doesn't seem terribly strong, and I'll probably feel the need to secure the compact with a rubber band when I travel.)

When I ordered Rapture, I was hoping for a purple-leaning plum with visible gold shimmer. Instead, I got a brownish mauvey plum with extremely subtle shimmer. I was a little disappointed, but in Urban Decay's defense, the website does describe Rapture as "a deep mauve with a hint of shimmer." I should have held out for a blush closer to my ideal, but I find that stress makes me buy beauty products not for what they actually are but for what I want them to be, even if I know better. One more reason to continue my no-buy until the end of the year! Luckily, Rapture is still a beautiful blush: 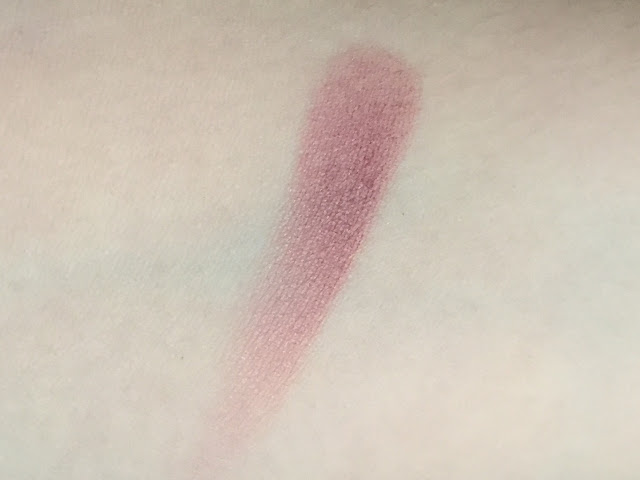 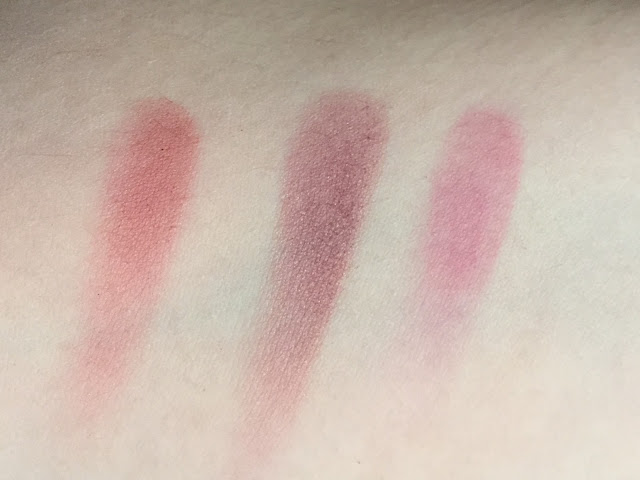 Compared to Rapture, Flushed looks almost like a burnt coral! 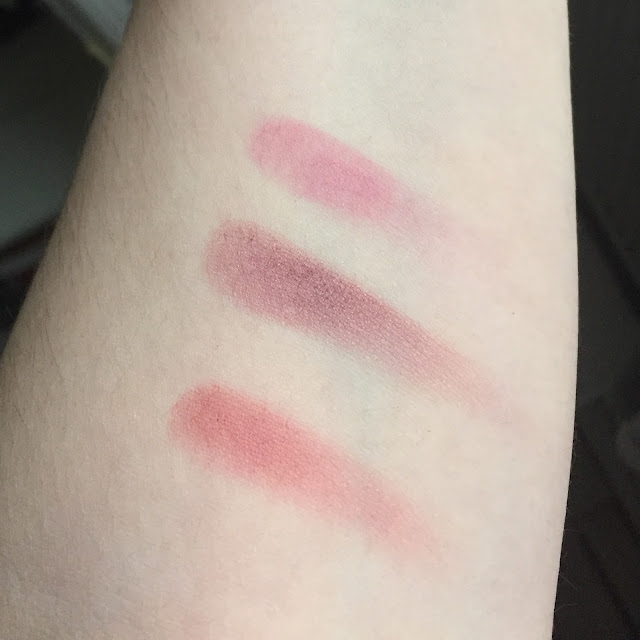 Unfortunately, these differences aren't quite so apparent when I'm wearing the blush as it's meant to be worn. Blended out, Rapture looks more or less like a cool pink, and the shimmer diffuses into a soft sheen. I have a poor track record of applying blush so that it's actually visible in blog photos, but with Rapture you're in luck: yesterday I had a practice Skype interview (I have a real one in a week and a half, eep!), and I wore more blush than normal so that the webcam wouldn't wash me out. Here's a photo I took before putting on lipstick: 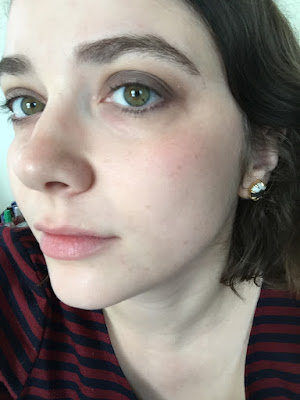 Rapture is a little darker than Mata Hari, but it's not dramatically different, and after trying it on for the first time I resolved to send it back. Except that I reached for it a few days later, and again the next day, and now a month has passed and I've worn Rapture almost every day of that month. I think it's fair to say that I'm keeping it.

Formula-wise, Rapture is pretty much perfect: finely milled, easy to blend, and long-wearing. Of course, the "8-Hour" moniker sets a hilariously low bar: most of us do in fact wear our makeup for at least eight hours at a time and would like our blush to last that long. For sheer self-effacing modesty, this blush falls right behind my coffee maker, which touts itself as "probably the best way to brew coffee."


I do appreciate Urban Decay's frankness: it's better than the wacky "24-hour" claim that some beauty brands make. And for what it's worth, Rapture might be my longest-lasting blush. In fact, I'd venture to say it hangs on longer than 8 hours.

In case you were wondering, it also pairs perfectly with Rapture lipstick: 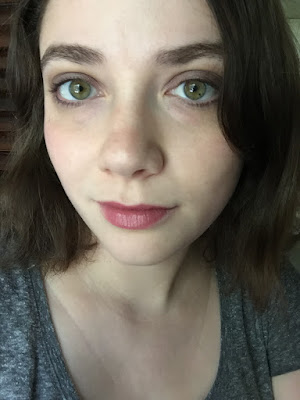 I still want a purple blush, though, and Bittersweet is still tempting me, but I might cheap out and order ColourPop Rain when my no-buy ends. For now, Rapture is a self-evident choice as the days get shorter and colder. 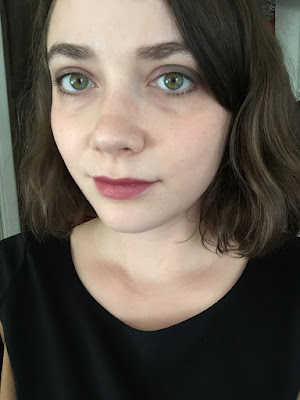 Have you tried any Urban Decay blushes? I'm very impressed with the formula and the shade range, though $26 still seems a bit steep to me.
Posted by auxiliary beauty at 4:08 PM