When I first declared my no-buy three weeks ago, I predicted that my willpower would be tested severely. Instead, I immediately felt a sense of unaccustomed freedom. I'd grown used to thinking of my beauty purchases as stress relievers, but I hadn't considered that they might actually be a source of stress. Every new purchase brought pleasure and excitement, but never without an undercurrent of guilt and worry: can I really afford this? do I really need it? will I really use it, or will it end up gathering dust? And now those anxious questions are gone. My no-buy has liberated me to play with the makeup I already own instead of constantly plotting to buy something new. I mean, ask me in a month whether I still feel this way, but for now? I'm pretty content, and I'm glad I caught an incipient problem before it became more serious. My plan for 2016 is to try a Monika-style low-buy (no more than two new items per month), but with a couple of no-buy months thrown in.

Stepping back from consumption has also given me a better sense of my actual makeup preferences and needs. Too often, we buy makeup because some alternate-reality version of us insists we'll use it all the time. Well, the alternate-reality AB may wear sparkly teal eyeshadow, but the real-life AB invariably reaches for matte or barely shimmery eyeshadow in taupe, gray, brown, and plum. I've been doing a lot of neutral looks in the last couple of months (sadly, my no-buy hasn't encouraged greater creativity!), and I've been noticing genuine gaps in my collection. At least half a dozen times this month, I've wished for a light matte brown eyeshadow for an all-over lid color, but the closest thing I have is ColourPop Bill, which is more pink than brown. I don't own a matte highlight shade, either. I mean, this is some pretty basic beginner-makeup shit that I overlooked in my pursuit of the eccentric and cyborgian. Before my no-buy, most of my makeup desires were sparked by blog posts about cool new stuff. I wouldn't feel the need for a lipstick like X before I saw the rave review by blogger Y, but after reading Y's post, I'd think of nothing but X until I bought it. Or I'd idly browse the Sephora website until something in particular caught my eye, and before long my mild interest would sharpen into an active desire. I haven't indulged in my online-browsing habit since my no-buy began, and I find reviews of new products less convincing because, well, I know I can't have them. Instead, I'm paying more attention to what I actually need (so far as one can "need" any beauty product).

Of course, this means that my makeup wishlist has been growing. And since it's Thanksgiving, a holiday all about spending time with loved ones manic consumption, I thought I'd give you a sense of the sort of thing I've put on the "buy in 2016" list recently, in order from most to least desired.


I'm on a real Urban Decay kick these days, aren't I? I never paid much attention to Urban Decay until this year, largely because I couldn't get into the Naked hype. Naked Palettes 1, 2, and 3 were too sparkly for my tastes, while the first Naked Basics palette was too warm-toned. Until last week, I had no idea that Urban Decay had released a cool-toned Basics palette in August 2014—that gives you a sense of how little I used to care about the brand. But in a recent search for the aforementioned matte brown, I decided to take a second look at the original Basics palette, only to discover that it had acquired a taupier sibling. I guess Urban Decay will just keep throwing Naked palettes at us until the last stubborn holdout has found one that suits her. Come to think of it, the last holdout may have been me.

Serious question: would it be cheating to ask my boyfriend for this as a Christmas present—or early Christmas present, since the Urban Decay site is having a 20%-off sale tomorrow? (Edit: I decided that it wasn't cheating.)


Despite my ambivalence toward the Audacious formula (and for that price point, one really shouldn't feel ambivalent), I've been attracted to this color ever since the Audacious line came out. Dominique is one of the ten shades exclusive to NARS freestanding stores, the NARS website, and Barneys, so I didn't get to see it in person until this month, when I visited the NARS boutique in New York. I'd always assumed that Dominique was similar to MAC Up the Amp, since they're both midtone purples with a hint of gray. But it turns out that Up the Amp is brighter and pinker (that is, more wearable for most people), while Dominique has that zombie undertone I find oddly flattering:


I might wait to buy Dominique until I've finished my tube of Up the Amp, which is nearing its end. Or I might buy Dominique on Jan. 1, 2016. We'll just have to see.

3. ColourPop Super Shock Cheeks in Rain and Sticky Sweet ($8 each)

I've wanted a true purple blush for well over a year now, and it doesn't seem like I'll stop wanting one anytime soon. But I'm reluctant to spend too much on a wacky color that might prove unflattering, so instead of shelling out $26 for Urban Decay Bittersweet, I'm going to do the semi-responsible thing and order ColourPop Rain.

ColourPop also makes a metallic magenta-leaning purple blush called Sticky Sweet. The website classifies it as a highlighter, but it's way too opaque to deserve that name. It is, however, gorgeous. I like the two ColourPop highlighters I have, so I doubt I'll be disappointed here.

I want a pale candy-pink blush for spring, something lighter and cooler than NARS Mata Hari, maybe even with brows to match (yes, this is a kpop-inspired lemming):


The closest blush I've found to my Platonic ideal is Gaiety, NARS' lightest, coolest pink, but feel free to point me in other, preferably cruelty-free, directions! (I'm fairly certain that NARS' website photo of Gaiety leans too dark and warm.) 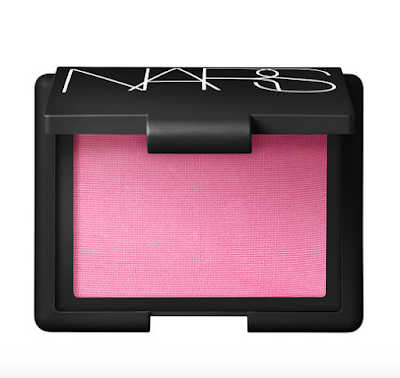 
I almost never wear glitter topcoats, so of course I want to drop $18 on a luxury glitter topcoat. The densely packed lavender holo glitter is magical, but it's the name I find most appealing. "Vegas Post Apocalyptic" might be my favorite polish name ever (another Smith & Cult offering, "Gay Ponies Dancing in the Snow," is a close second). The grammar stickler in me wants to point out that the name should be "Vegas Post-Apocalyptic," but am I really going to quibble over a compound-adjective fail? I am not.

Enjoy your Thanksgiving, if you're celebrating! And many thanks to all of you for reading and commenting. <3 I wish I could give you some of the pumpkin-bourbon ice cream I made this morning, but alas, a photo is the best I can do: 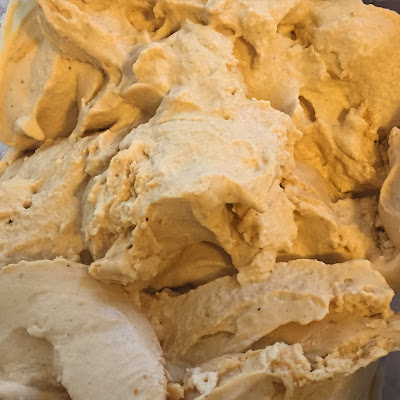 Posted by auxiliary beauty at 1:38 PM