A Journey Through Purge-atory, Part 3: Lipsticks and Nail Polishes

"A Journey Through Purge-atory" is my ongoing, if not exactly regular, destashing series; here are my first and second posts. Today, let's get rid of some lipstick and polish! 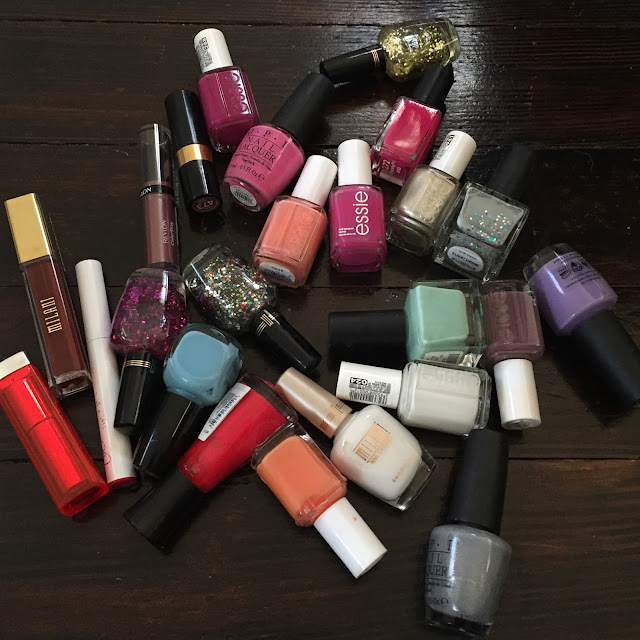 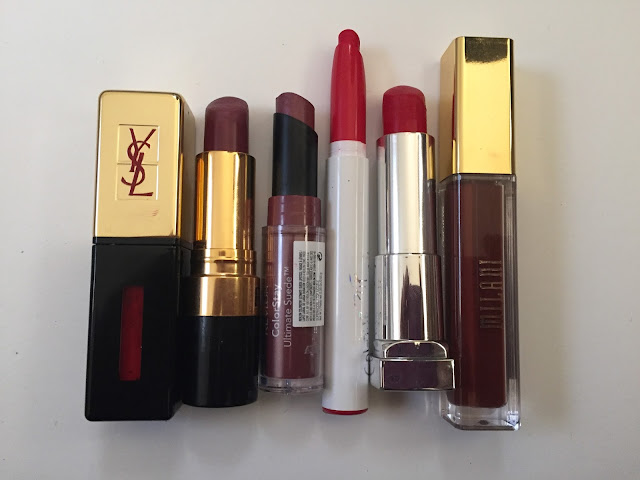 YSL Rouge Gouache is three years old now, and the formula seems a little off: it's thicker than it used to be and it doesn't quite set on my lips. We had some good times together, Rouge Gouache, but I didn't wear you enough while you were still in decent condition, because it turns out that I like opaque glosses only in theory.

Revlon Mauvy Night is one of my oldest lipsticks: I bought it in the summer of 2011 after seeing Midnight in Paris and falling in love with Marion Cotillard's dusky lip color. I did not, however, fall in love with Mauvy Night. Over the past four and a half years, I've picked it up maybe once a year, wondered why I never wear such a nice shade, tried it on, and thought, "Oh, right, that's why." It's just so drab and unremarkable. It's not unflattering, but there's nothing special about it, either, and the color looks dated and ages me a bit. Oddly, Mauvy Night is very similar to Urban Decay Rapture, my favorite neutral lipstick at the moment. And that's why I don't believe in dupe-hunting—the smallest tweak to a color's warmth and saturation can pull it from "modern vampish neutral" to "bland '90s office makeup." I'm going to give Mauvy Night to my mom, who likes to mix Maybelline Brazen Berry, a bright purple, with more restrained mauve shades like this one.

Revlon Supermodel was a birthday gift from my mom, and it's going back to her. It's almost identical in color to Mauvy Night, but the formula is worse: heavy and a bit sticky, yet not even opaque. How is that possible?

ColourPop Frenchie just doesn't suit me. It always looks a bit off, and life is too short to wear lipsticks that look a bit off. If I found Frenchie more flattering, I could put up with the heavy, slightly gummy Lippie Stix formula, but I don't and so I can't. (I still want to try the Lippie Stix in Brills, though. Finding an opaque lavender lipstick is so difficult.)

Maybelline On Fire Red is a perfectly good almost-opaque cool-toned red. I have nothing against it. It's comfortable, flattering, a bit shiny, and not as obnoxiously bright as Urban Decay 69...and I never wear it, because I just don't find it exciting. There's nothing truly distinctive about it. I'm hoping my roommate will enjoy it more than I do.

Milani Crush is simply unwearable for me. I put it on a few weeks ago, on a rare day when my lips were almost perfectly smooth. The formula made my lower lip crack open after an hour or two, and it took me several days to nurse my lip back to normal. I wish the beauty world were less enamored of liquid-matte lipsticks right now: I can't be the only one who dislikes the totally flat finish and finds the formula too harsh. I guess I'll just have to wait for this trend to run its course; at least that means I'll be saving some money. If you like liquid mattes, however, you'll be happy to hear that Milani is making the Amore Matte line permanent in early 2016 and adding many more shades!

Swatches, L-R: Mauvy Night, Supermodel, Frenchie, Crush, On Fire Red. Sorry, I forgot about Rouge Gouache until after I'd washed the swatches off my arm. 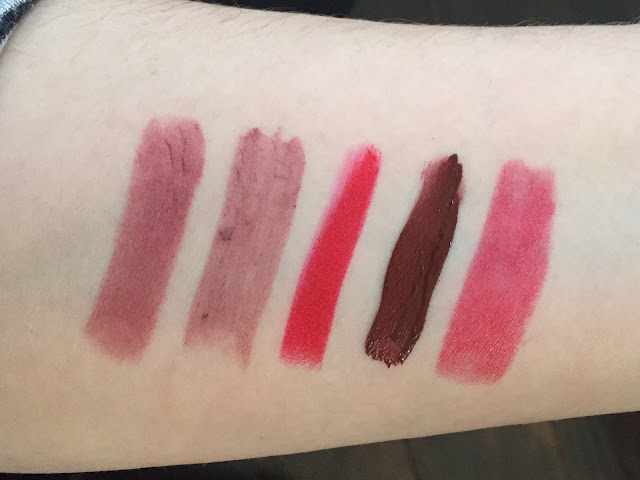 I'm also clearing out 17 (!) nail polishes that I never wear, either because the formula is problematic (e.g. streaky, chip-prone, slow to dry) or because the color looks bad on my hands. 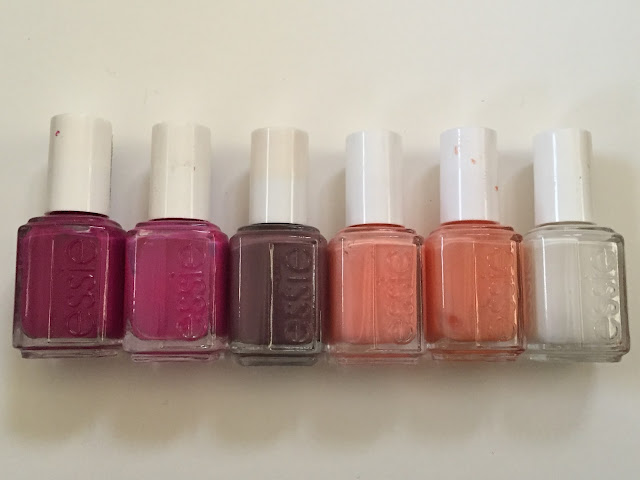 L-R: Milani Fuchsia, Gold, Gems, White, all discontinued. White (what a name, huh) is streaky, and the glitter in the other three polishes hides at the bottom of the bottle, just out of reach of the brush. 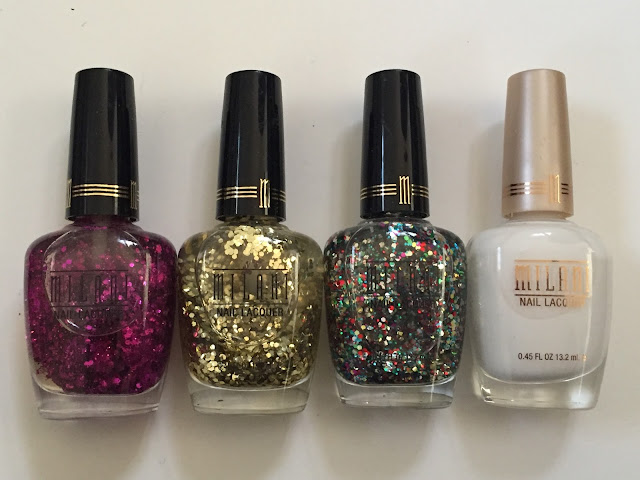 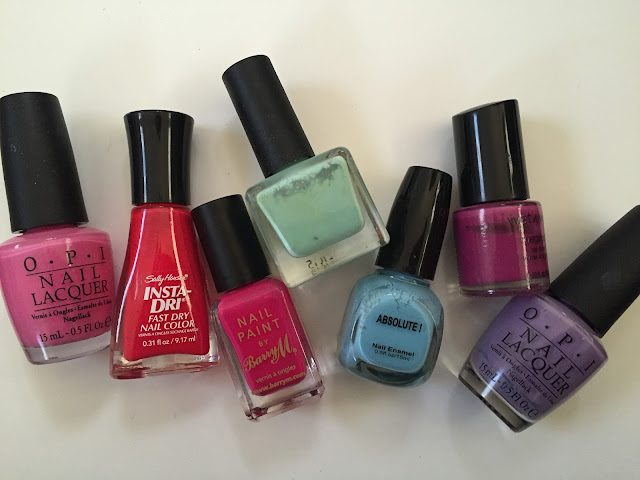 Finally, three polishes that get one more chance before I purge them: Essie Good as Gold, Urban Outfitters Bright Lights, and OPI I Don't Give a Rotterdam! Good as Gold has a great formula, but I don't like gold polish except for nail art, which I do maybe once a year. I haven't worn Bright Lights or IDGAR for quite a while, but if memory serves, both are streaky and slow to dry. I'm going to try layering them over another color, perhaps a gray like Essie Chinchilly. 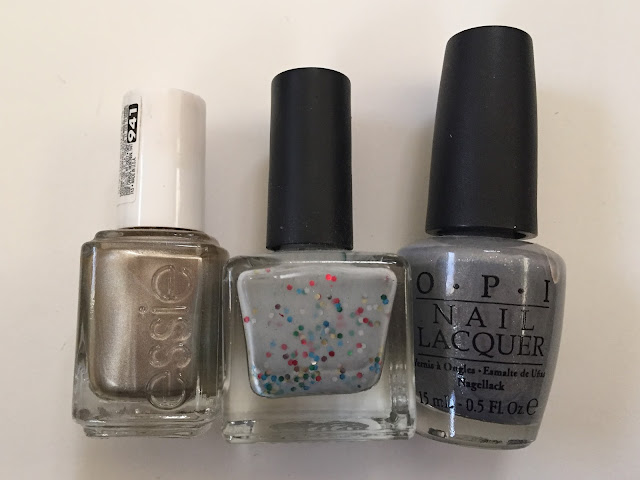 My roommate has claimed five of the polishes I'm destashing, and I might leave the remaining dozen in the English department office for anyone who wants them. By the way, did you know that nail polishes are classified as hazardous materials and you're supposed to bring unwanted nail polish to your local waste-disposal facility instead of throwing it in the trash? Yet another reason not to buy a bunch of polishes you're unlikely to wear—not that that's stopped me from adding Marc Jacobs Fluorescent Beige and Butter London Toff to my wishlist in the last week. I'm hopeless.
Posted by auxiliary beauty at 4:08 PM