Despite my no-buy, I've somehow managed to acquire a new lipstick. My boyfriend teaches in the UK and asked me if I wanted him to bring me anything when he came to visit this month. He was actually the one who suggested that he might surprise me with some makeup from Topshop, and who was I to say no? I told him that I liked the Lip Bullets and asked him to pick one out, and he obliged with a mini version of Motel, a warm light brown, packaged in a pyramid-shaped holiday ornament. I'd actually been looking at Motel online, so I was very excited to try it out.

In all its ornamental glory (and yes, that's a hot-pink daruma). If only I had a tree to hang it on... 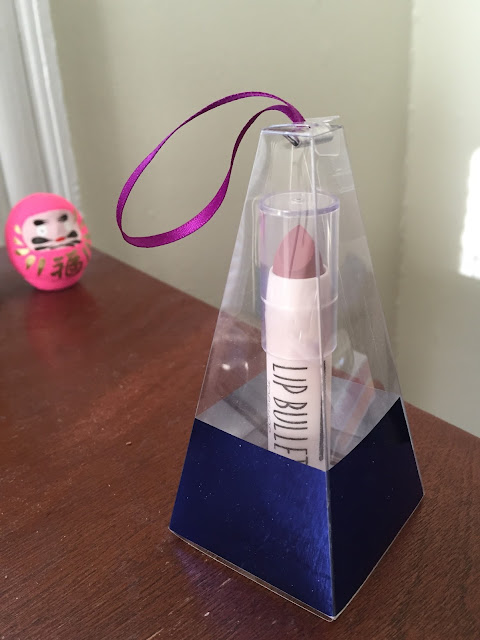 When I finally brought myself (after five days!) to wrestle the lipstick out of its pyramid, the cap popped off and the bullet got nicked. So if you find yourself in possession of one of these, maybe try not to be a clumsy ass.

Here's Motel next to a full-sized Lip Bullet: 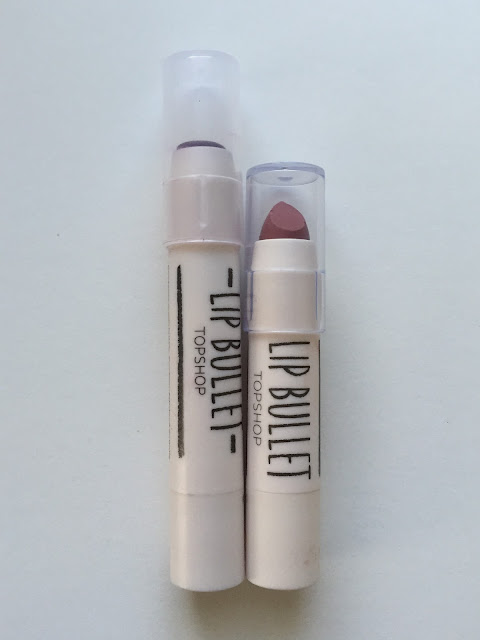 This would make it appear that the mini Lip Bullets deliver about two-thirds the regular amount of product, but the size of the tube is deceiving. At just 1 gram each, these mini bullets are very mini indeed—this is all the product you're getting, bitches: 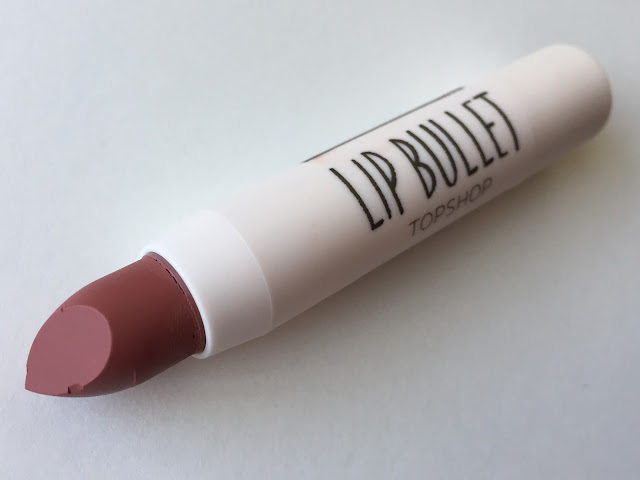 Believe it or not, the mini Lip Bullets are the same size as the ColourPop Lippie Stix (just shorter and wider), but they're half the size of the Tom Ford Lips & Boys (2 grams), and one-third the size of the regular Lip Bullets (3 grams). The mini versions are sold in pyramid form for $8 in the US and £8 in the UK, and in boxed duos for $16 here and £10 in the UK. The full-sized bullets are a much better deal at $10/£8 each. You read that right: in the UK, £8 will get you either three grams of lipstick or one gram of the same lipstick in a flimsy plastic pyramid. I don't mind having the mini version, though: I own so many lipsticks that using up even a sample-sized one will be a challenge.

Motel is a warm terra-cotta brown in a satin formula. There's a hint of peach to it, but also a hint of plum. It's the sort of color that's widely (if not universally) flattering. 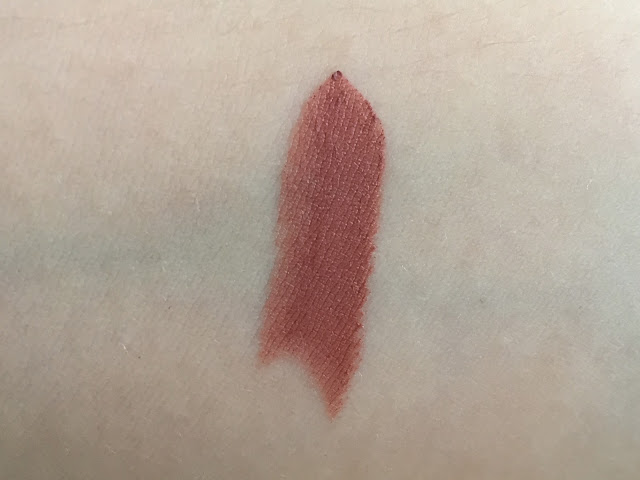 If you're a lipstick enthusiast with the slightest desire to conform to the trends of 2015, you likely have at least one similar shade. Personally, I have four. L-R: NARS Last Tango (LE), Maybelline Crazy for Coffee, Topshop Motel, Revlon Pink Truffle, Milani Matte Naked. 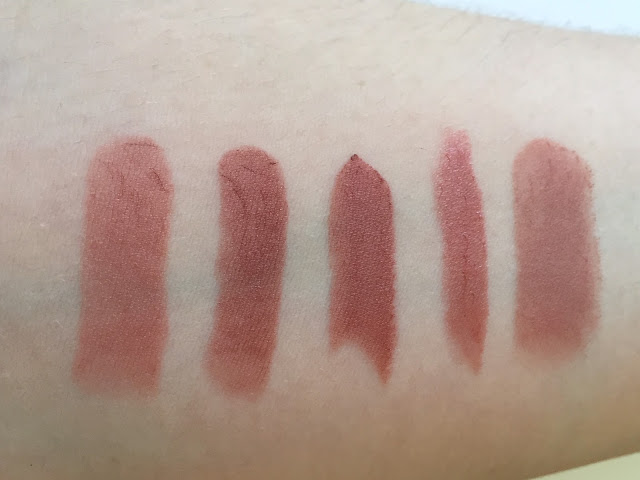 The closest color matches are Crazy for Coffee and Pink Truffle (though Motel is more matte and opaque than either of these), while the obvious outlier is the cooler, grayer Matte Naked. To my eye, Motel also resembles MAC's much-coveted Whirl lipstick, though Whirl might be a bit cooler and pinker. However, Motel certainly pulls pinker on my lips than it does in arm swatches. 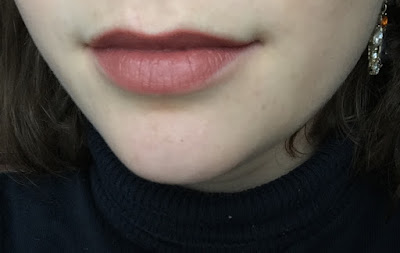 An Instagram pal compared it to the NARS Audacious lipstick in Jane, which I think is exactly right: it looks like a deep pinkish nude in cool natural light, above, and a rich caramel brown in warmer artificial light, below. A year ago, I would have dismissed Motel as too brown, too warm, too '90s; what a difference 2015 has made.

Motel is my first non-matte Lip Bullet (I also own two matte ones, Get Me Bodied and Plastique). It goes on opaque and creamy; the texture fills in my lip lines, smooths over imperfections, and generally makes my lips look plumper and healthier. The formula is odd, though: slippery but also somewhat grainy, as if there are tiny particles of sand scattered throughout the lipstick. The color never quite sets on my lips, and it transfers easily and fades within a few hours, especially if I eat or drink. I love the color, but I don't think I'd repurchase Motel in a full-sized bullet; I'd rather find a color dupe in a less slippery formula.

For Motel's maiden voyage into the world, I paired it with a cool-toned eye: two shades from theBalm, a lavender taupe and a matte dark plum (top left and bottom right in the palette below). I also used a bit of Illamasqua Zygomatic blush and ColourPop Lunch Money highlighter. 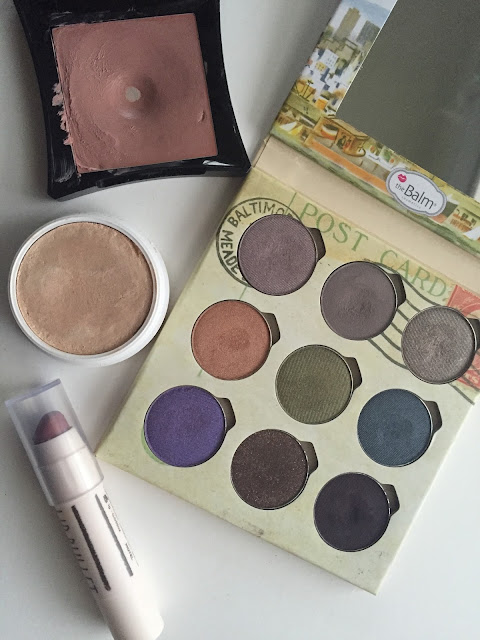 In my view, a turtleneck is the ultimate complement to brown lipstick. I felt like a grad student in 1995: 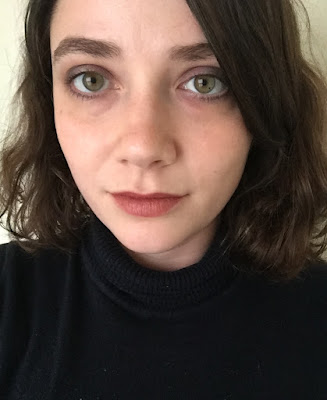 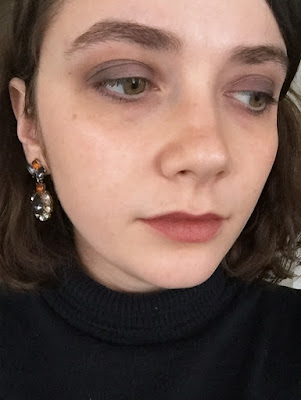 And here's the look I wore this morning: just Motel and concealer. I call it "oh shit I'm supposed to make biscotti for my professors today and I forgot to get eggs at the store yesterday, so I guess I have to run back out." This photo is more color-accurate than the ones above, which lean a bit too warm. Also featuring the Warby Parker glasses that make me look like a writer for Playboy in 1967: 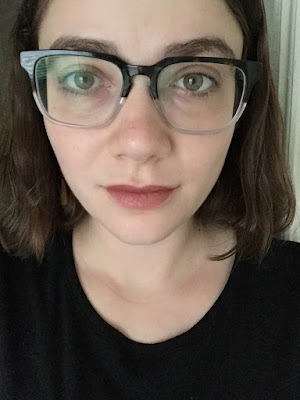 You thought I was exaggerating, didn't you? 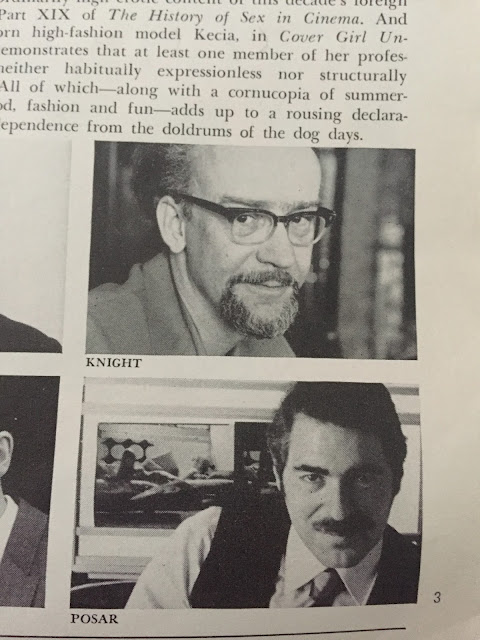 Know this: I never exaggerate.
Posted by auxiliary beauty at 11:15 AM