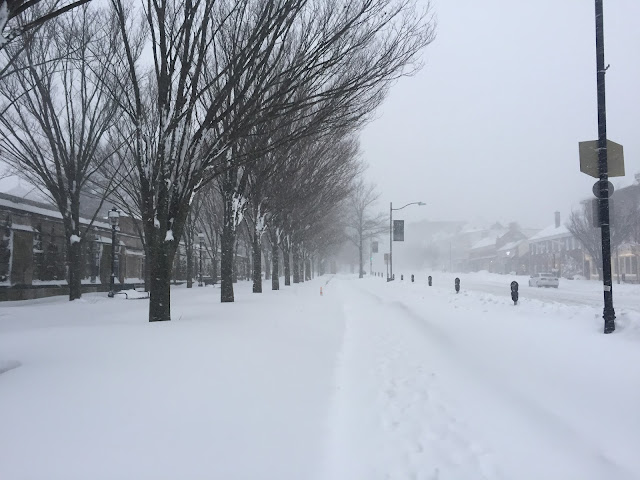 (yes, I wore Cherries in the Snow in the snow) 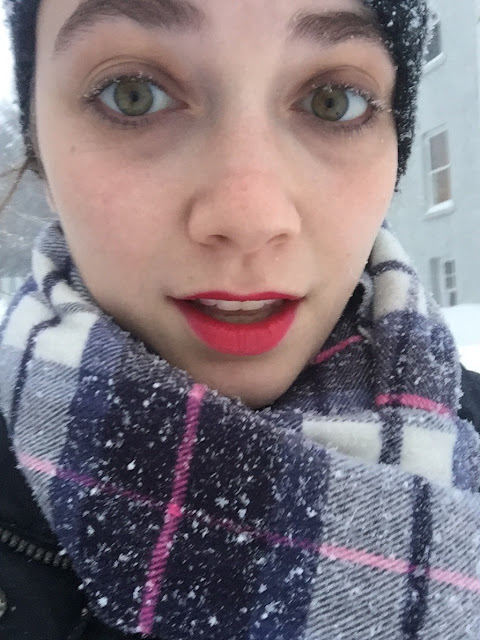 ...so I think it's a good time for another winter story:

Like many girls, I grew up reading Lucy Maud Montgomery's Anne of Green Gables series. One of the most memorable chapters in the first book, "Matthew Insists on Puffed Sleeves," concerns the orphaned Anne Shirley's first party dress. After twelve-year-old Anne has lived with the elderly siblings Matthew and Marilla Cuthbert for a year, Matthew has an epiphany: "Anne was not dressed like the other girls!...Marilla kept her clothed in plain, dark dresses, all made after the same unvarying pattern." The school's Christmas concert is coming up, and Matthew decides that Anne needs a dress with puffed leg-o'-mutton sleeves, the height of fashion in the mid-1890s:


Suspecting that his puritanical sister will "throw cold water on his project at once," Matthew goes behind Marilla's back and enlists the help of his friend Mrs. Lynde, who promises to make the dress: "I believe a nice rich brown would just suit Anne, and William Blair has some new gloria in that's real pretty." The brown gloria dress becomes Anne's Christmas present, and Anne goes into raptures at the sight:

"Oh, how pretty it was—a lovely soft brown gloria with all the gloss of silk; a skirt with dainty frills and shirrings; a waist elaborately pintucked in the most fashionable way, with a little ruffle of filmy lace at the neck. But the sleeves—they were the crowning glory! Long elbow cuffs, and above them two beautiful puffs divided by rows of shirring and bows of brown-silk ribbon."

I read the books after watching the 1985 Anne of Green Gables miniseries, in which Anne's coveted dress is a very '80s light blue:

So when I came to Montgomery's description of the dress (the equivalent of erotica for eight-year-old me), I was taken aback: this elaborately puffed and ruffled confection was brown, of all colors? Who would get excited about a brown dress? My aesthetic sense had been formed in the late '80s and early '90s; when I thought party dress, I thought soft pastels—and so, apparently, had the costume department at the Canadian Broadcasting Corporation in 1985. But Lucy Maud Montgomery, writing in 1908, had not. "Pretty," "lovely," "dainty": all those words had struck her as perfectly appropriate for a brown dress. It was something of a watershed moment for me. I was no longer just reading a book about a little girl like myself; I was also reading a book about a little girl who belonged to a past that was palpably other, down to the smallest material details.

It's unlikely that the people at MAC had Anne of Green Gables in mind when they created Antique Velvet, a dark cool-toned brown released in the Matte Lip Collection in May of last year. But some long-lost memory must have flared when I looked at the swatches of the twelve new matte lipsticks, because I was attracted instantly to Antique Velvet, despite never having felt the need for a dark brown lipstick. 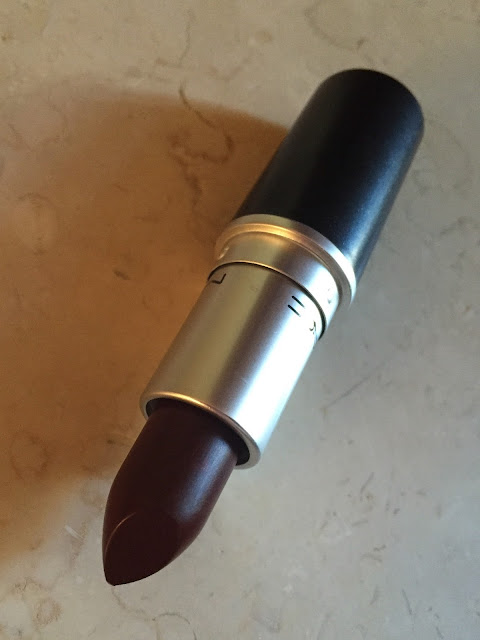 The collection had a few colors more to my usual taste—"lavender violet," "dirty rose," and "deep blackened plum," to quote MAC's product descriptions—but it was Antique Velvet I couldn't stop thinking about. It was different from the many other brown lipsticks released in 2015: there was a depth and richness to it, a slightly plummy coolness. Though my conscious mind didn't make the connection between Antique Velvet and Anne's brown gloria dress until I started writing this post, my subconscious certainly did. And isn't that how most of our material desires arise? 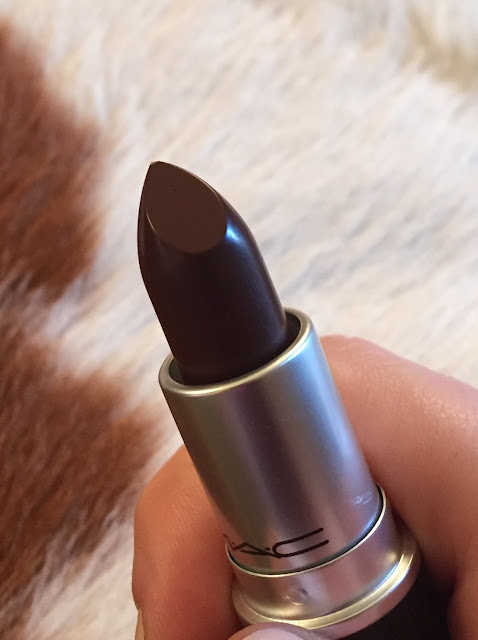 But instead of buying a $17 tube of Antique Velvet right away, I tried out a series of cheaper dark browns that reminded me why dupe-hunting is usually a bad idea. As I've written before, I think the concept of dupes is helpful only if you already own a dupe of a product that has caught your eye. But if you own neither desired product X nor dupe Y, and you can afford X, odds are good that buying Y won't satisfy your yearning for the product that originally piqued your interest. I say this with smug assurance now, but I fell into precisely that trap after Antique Velvet came out. "I won't wear a dark brown enough to justify spending $17 on it," I thought, so I bought Milani Crush instead, and we all know how well that turned out. When it became clear that I couldn't wear liquid matte lipstick without destroying my lips, I picked up NYX Enamored. Despite coming in traditional solid form, Enamored managed to be even more drying than the liquid matte Crush. I'd bought both lipsticks for the fall season, but I ended up wearing neither; instead, during my no-buy in November and December, I looked up swatch after swatch of Antique Velvet and deplored my cheapness. I even tried it on during a visit to Nordstrom, and of course fell deeper into lipstick lust: 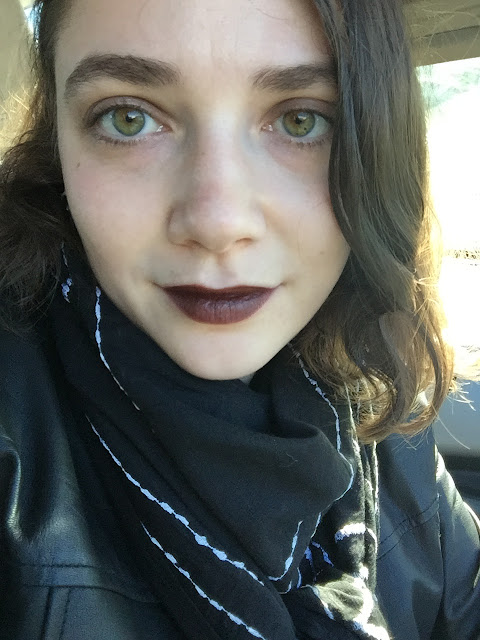 When NYX released new additions to its matte lipstick line at the end of December, I briefly considered buying Goal Digger, a dark brownish plum that reminded me of Antique Velvet. Then I came to my senses. Another dupe, ordered sight unseen? What was I thinking? So when my no-buy ended earlier this month, I decided to put an end to my regret as well. I went to the MAC store in San Francisco's Union Square and finally bought the real thing. Matthew Cuthbert didn't settle for cotton or burlap for Anne's brown dress, did he? 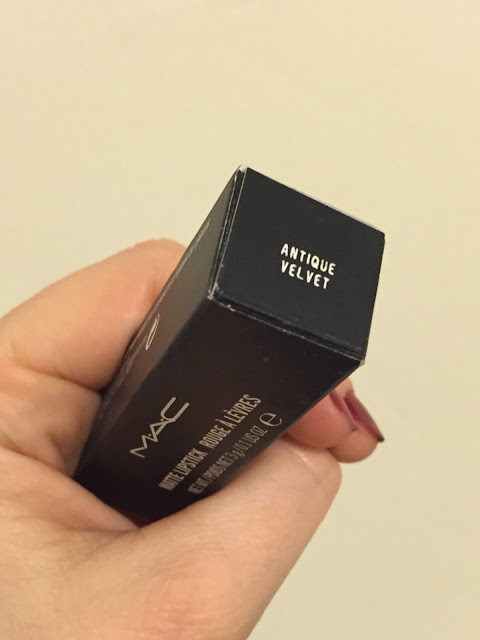 I often feel disappointed in a product that I've wanted for months, but I'm pleased to report that Antique Velvet has lived up to all my expectations. The color is positively luxurious: a very dark, almost black, cool-toned brown. You see a lot of gray-toned taupey browns these days, but rarely do you come across a brown with so much purple in its base. It's not quite the color of dark chocolate, but it comes pretty close. Yes, it resonates with the current '90s revival, but there's also something '20s about a deep, rich brown lip—and given the choice between '90s and '20s, I'd choose the age of Theda Bara any day. 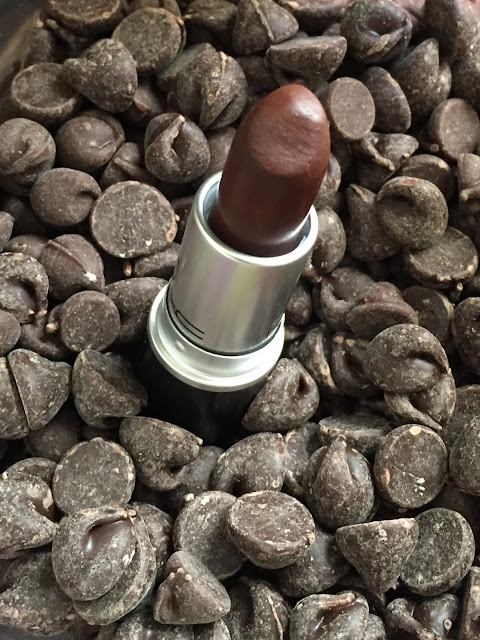 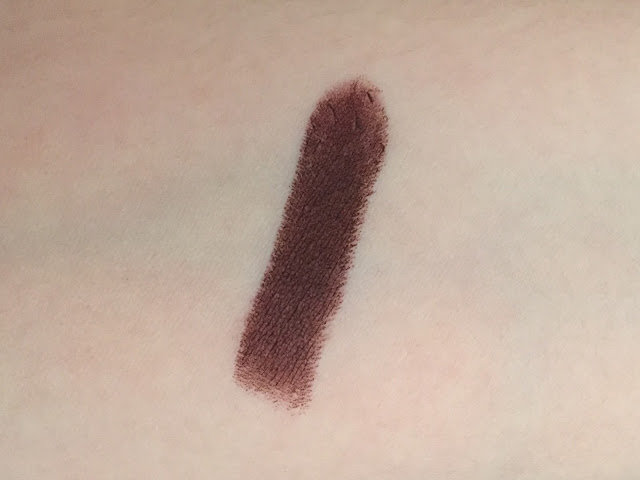 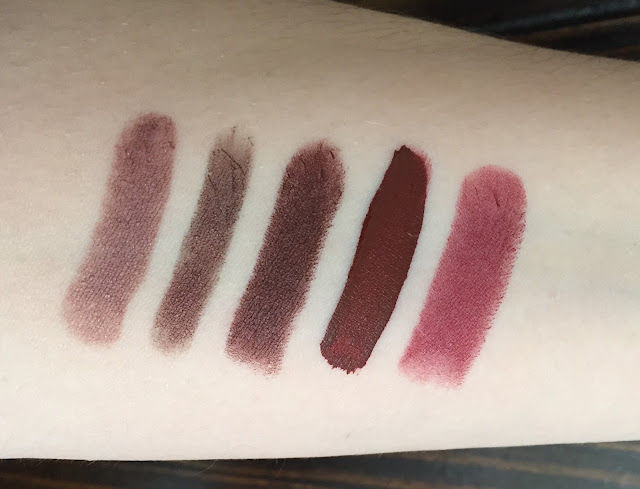 Enamored is a little cooler than Antique Velvet, and it has burgundy shimmer that isn't showing up in this photo (and doesn't show up well on my lips, either). Crush looks much warmer than Antique Velvet here, but it's fairly similar on the lips; if you already own Crush and like the formula, you probably don't need Antique Velvet too. And now that I've made these comparison swatches, I think it's time for Enamored and Crush to leave my stash for good. Antique Velvet is the only vampy brown lip color I need. 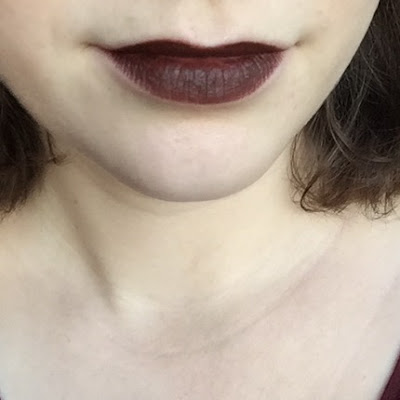 MAC makes one of my favorite matte lipstick formulas: soft, comfortable, easy to apply, and more or less non-drying. There are exceptions to this rule (Eugenie is almost impossible to apply without a lip brush), but Antique Velvet isn't one of the exceptions. I do have one quibble: I find that it needs a touch-up every couple of hours, because it looks a little gruesome on my lips when it fades, as if I've been eating a brownie too enthusiastically. A lipstick in a conventional color can look appealing once faded; a dark brown lipstick, not so much, at least on someone as pale as I am.

It's surprisingly easy to find colors that pair well with Antique Velvet. The hint of plum in its formula makes it especially amenable to purples, light or dark. Last week I wore it with lavender on my eyes (Kiko 251) and cheeks (Tony Moly Milky Violet). To balance out the lipstick, I also filled in my brows a little with Urban Decay Primal eyeshadow from the Naked2 Basics palette, applied with an e.l.f. angled brush over Milani clear brow gel. 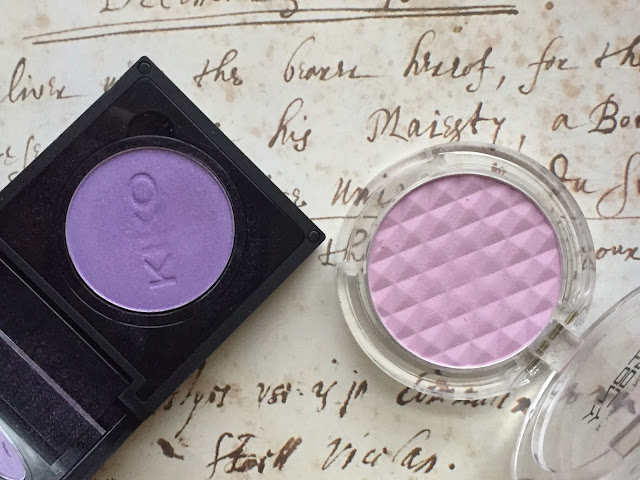 251 is a sparkly blue-toned lavender sheer enough not to show up as a stark pastel, even over primer. To further neutralize the lavender, I blended theBalm Sophisticated, a cool-toned, shimmery medium brown, into my crease and outer V and along my upper and lower lashlines. As ever, I wish Milky Violet were more pigmented (I slapped at least three layers on my face before taking these photos), but I like the subtle lavender glow it imparts. 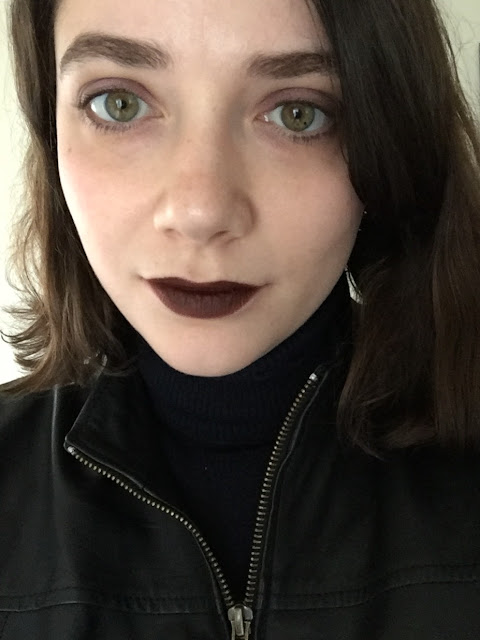 I SWEAR I'M WEARING LAVENDER BLUSH LOOK HERE IT IS: 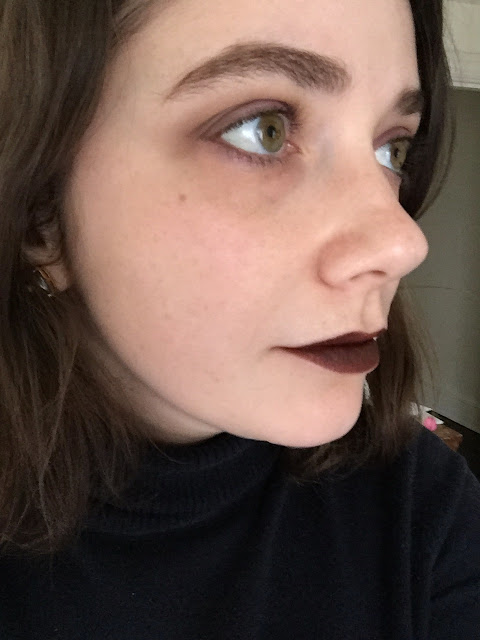 Of course, Antique Velvet also works well with other browns, but I love how well it sets off fairylike cool-toned pastels. In the future, I might try it with ColourPop Monster highlighter, the cool pink eyeshadow I have yet to buy, or the mint shade from the NARS Habanera duo. Or a bright purple blush—one day I'll order ColourPop Rain. As Anne Shirley would say, Antique Velvet offers "scope for the imagination," and isn't that what we all hope our makeup will do?
Posted by auxiliary beauty at 12:30 PM