Today marks the end of my two-month beauty no-buy, which I've discussed here and here. The terms of my no-buy were fairly lenient: I was allowed to replace skincare, haircare, and "boring" products like mascara and concealer, and I could accept (and request) gifts, but I couldn't buy any new makeup or nail polish. I'm proud to say that I never broke the no-buy, though I picked up a few more sheet masks than I might have otherwise, and I received three beauty products as gifts: from my boyfriend, Urban Decay's Naked2 Basics palette and Topshop's mini Lip Bullet in Motel, and from my mom, a bottle of Essie Summit of Style. 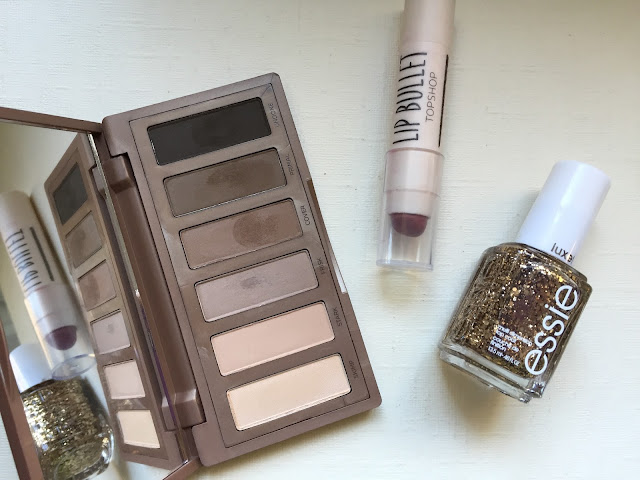 I went on the no-buy for a few reasons. First, to save money: I'm a grad student who earns barely enough to cover rent and food, and I don't have enough discretionary income to buy new makeup constantly. Second, to prevent my collection from getting overwhelmingly large: I want to use and appreciate everything I have, and get rid of what I don't use and appreciate. Third, and most importantly, to sever the connection in my brain between emotional distress and the urge to shop. The fall semester was a trying time: I was on the academic job market for the first time while teaching and writing my dissertation and getting sick multiple times per month and trying to fend off the feeling of gloom that always accompanies the dwindling days. It was no coincidence that my beauty spending increased in the fall. I won't go so far as to say that my spending was out of control or that I had a shopping addiction, but I noticed that I was relying on beauty purchases to give me those little jolts of pleasure that seemed to make my days more tolerable. By early November, I knew I had to cut myself off—and when I did, I immediately felt a sense of relief. This reassured me that some part of my brain had been begging me all along to make a change.

My no-buy may have been brief, but it taught me a few things:

I've always had decent impulse control, at least where money is concerned (food is another matter). If there's a good reason why I shouldn't buy something, I'll almost never buy it. So it wasn't difficult for me to stop buying makeup and nail polish for two months. What was much harder, I soon discovered, was breaking the habit of wanting makeup and nail polish. Though the wants didn't translate into actions, they were still occupying mental space. I kept a wishlist, I checked Temptalia and Makeup and Beauty Blog daily, I looked up swatches of new releases. Since my daily work involves a good deal of mental heavy lifting, I gravitate toward brainless pursuits during my free hours, and what could be more blissfully brainless than comparing the undertones of five different matte brown lipsticks? I wouldn't say that this habit is bad, exactly, but it's doing nothing to increase my happiness or quality of life. I could be using that time to keep in touch with distant friends, or practice yoga, or catch up on my pleasure reading, or experiment with new eyeshadow placement, or a million other things. Going forward, I'd like to devote less brainspace to products and more brainspace to people, ideas, and offline activities.

2. Minimalism can still be a form of consumerism.

In the past month, I've spent quite a lot of time on the MakeupRehab subreddit (just what I needed, another way to waste time online). MakeupRehab is dedicated to no-buys, low-buys, Project Pan updates, collections of empties, and "TMO" ("talk me out [of X purchase]") posts. It's great that such a resource exists for people who feel that their beauty spending is out of control, but it seems to me that some of the users have merely replaced one compulsion with another. Endlessly brooding over how much of a lipstick you've used, how long it will be until you hit pan on an eyeshadow, how many products you're not allowed to buy—what does that really accomplish? I think it's telling that I found myself reading MakeupRehab as obsessively as I once read Temptalia. Both sites focus on products themselves, not on what those products can actually do. And on MakeupRehab, there's also a lot of guilt and self-recrimination involved. Many people there seem to buy makeup during emotional low points and then castigate themselves for it later (hey, that sounds familiar). And if there's one thing I've learned during my no-buy, it's that it's unhealthy to attach emotions to beauty products, or indeed any products. I'd rather buy a lipstick I want and move on than spend a year longing for it—which I have in fact been known to do, and look how well that turned out.

3. Short-term no-buys are better for me than long-term ones (at least for now).

Speaking of MakeupRehab, I notice quite a few people there—people who are used to large and frequent makeup hauls—putting themselves on no-buys for all of 2016. I'm no psychic, but my magic crystal ball of common fucking sense tells me that these people are setting themselves up for failure. If I'd tried a yearlong no-buy, I'd probably have thrown in the towel within three or four months. I'd rather make a couple of carefully considered purchases every month than attempt a yearlong no-buy, give in to temptation eventually, and beat myself up over my "failure." Again, my main goal is to attach fewer emotions to beauty products. For me, the way to do that is to buy a small number of products within my financial means, not to pine for a year over all the cool stuff I'm not allowed to have, or to persuade myself in January that my willpower will hold out until December when I know perfectly well that it won't.

4. Simple resolutions are better than complex ones.

Again, I want material things to take up less of my brainspace. I see people on Makeup Rehab making mind-bendingly complicated low-buy plans for 2016: "Okay, so if I skip dessert for three nights in a row I get $10 toward a lipstick, but only if the moon is in Sagittarius AND I've gone to the gym at least two days in the past week." Personally, I do want to lose some weight this year, but I don't want that plan to have anything to do with my low-buy. Why use a complicated reward system to link up two emotionally fraught forms of consumption and deprivation?

Plus, I'm bad with details. I can follow a low-buy plan that has two criteria; I can't follow one that requires a spreadsheet. That spreadsheet isn't going to help me when I'm standing in Ulta face-to-face with the new NYX matte lipsticks, is it? (There's one called Up the Bass, lolol.)

5. Just because it exists doesn't mean I need it.

There's some great makeup in the world. Not all of it needs to be on my face. My no-buy has taught me that I can appreciate the existence of a product without actively wanting it or, worse, buying it.

With all that out of the way, here are my resolutions for 2016!

1. Maintain a low-buy of no more than two new products (makeup, nail polish, and fragrance) and/or $40 per month, with at least two no-buy months.

These are guidelines more than absolute limits (though the $40 limit is harder than the two-product one). I'll do my best to abide by them every month, but there will probably be months when I buy more than two things or spend more than $40, and that's fine. I just want those figures present in my head when I'm shopping. My no-buy is exclusive of skincare and haircare, since I have very minimal routines and repurchase products only when needed.

2. Step out of my beauty comfort zone at least once per month with the products I already have.

Trying a new look once per month sounds hilariously unambitious, but that's where my brain is right now. I've fallen into a rut of wearing the same makeup in the same placements over and over, and when I do want a change, I'm more likely to buy a new lipstick than I am to experiment within my collection. I don't think there's anything wrong with having a makeup uniform, but I'd like to rediscover the creative aspect of makeup.

3. Check each beauty blog and subreddit on my blogroll only once per day.

If I don't know about new beauty releases, I won't want them. End of story. And keeping up with beauty blogs takes time, too!

If I'm anxious, depressed, sleep-deprived, or angry, that's a sign that I need to take better care of myself, not that I need to impulse-buy something online. At no point in my life has buying new makeup helped me overcome a problem or improved my mood for more than a few hours.

5. Keep a running list of the non-beauty items I actually need.

Why is it so easy to forget that I need to spend money on more things than rent, food, and makeup?

6. Record each beauty purchase (new or replacement) in a notebook or Word document.

I did this for a couple of months in 2014 and was surprised at how much I was spending. I think it's time to pick up the habit again.

I wish you all a happy, healthy new year. I spent my own New Year's Eve miserably ill, but I'm feeling better today (I managed to keep down a piece of toast: go me), and I'm excited to find out what changes 2016 will bring! One thing is for sure: it will bring new lipstick. 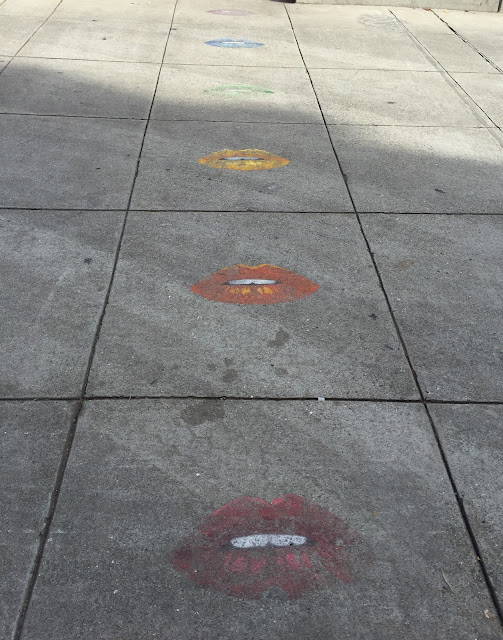 Posted by auxiliary beauty at 3:34 PM