Like many of us, I go through polish phases. Sometimes I prefer neutral cremes, sometimes bright pastels, sometimes dark shimmers. The category I'm most fickle about, though, is the glitter topcoat. I've accumulated quite a few over the years (so pretty in the bottle!), but I usually find it hard to wear glitter on ordinary occasions without feeling either childish or inappropriately festive. Recently, though, I've entered something of a glitter phase. 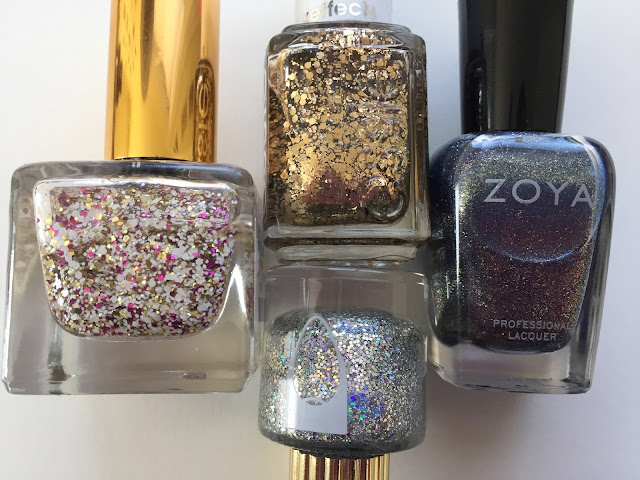 Carolina and I have discussed the temptation to buy glitter during difficult emotional periods, and I think that's part of the reason I've worn so much sparkly nail polish since the late fall. It's brutally cold outside, I'm on the academic job market, I don't know where I'll even be living in six months—glitter makes it all a bit more tolerable. Yes, gross materialism and all that, but there's nothing wrong with making your aesthetic environment a little prettier to counteract whatever else is going on in your life. In that spirit, I thought I'd do a roundup post of the glitter topcoats and color combos I've been enjoying recently! Left to right: Floss Gloss Dimepiece, Urban Outfitters 11:59, Essie Summit of Style, Zoya FeiFei. 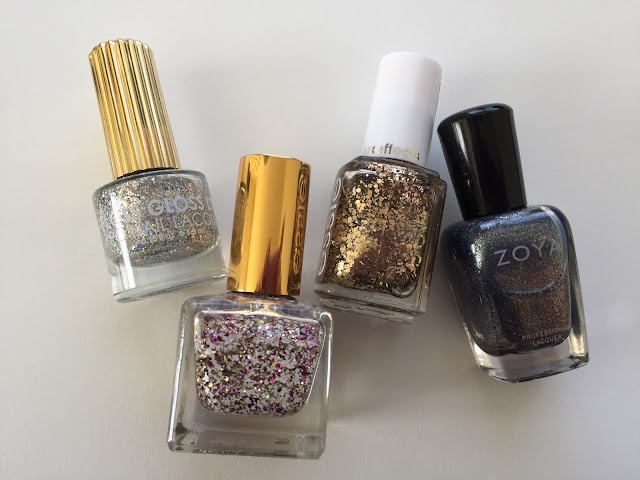 The polish that sparked my glitter phase was FeiFei (named after the stunning Chinese model Fei Fei Sun), which I picked up in October on a Whole Foods run. Nail polish counts as "groceries" if you're also buying carrots and almond milk, right? According to Zoya's website, FeiFei "can be best described as a medium steel blue base with heavy gold and blue iridescent metallic sparkle." I always get a chuckle from Zoya's unnecessary "[shade] can be best described as" phrase. Surely the mere fact that they're using that description indicates that they think it's the best one? For that matter, I don't think that is the best description for FeiFei, which also contains pink and green sparkle that creates a duochrome (trichrome? tetrachrome?) effect in sunlight. You can really see the pink shift here: 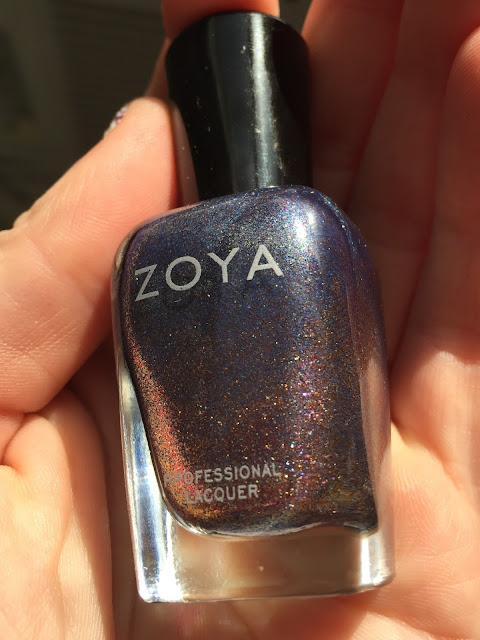 And the huge flecks of gold here: 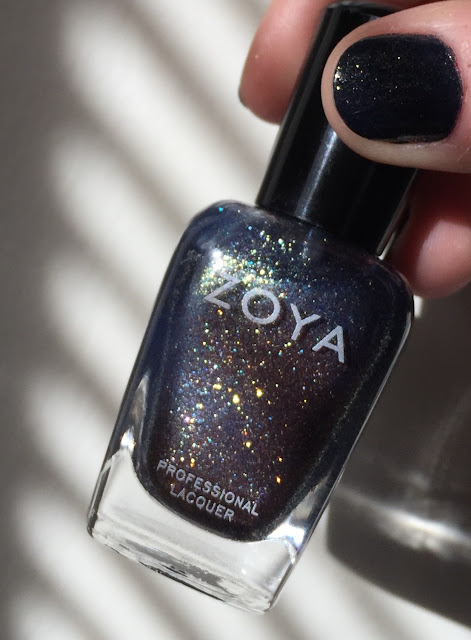 FeiFei is not marketed as a topcoat: Zoya rates its coverage 5 on an opacity scale of 1 (sheer) to 5 (opaque). So you can imagine my disappointment when I applied three layers of FeiFei and ended up with this: 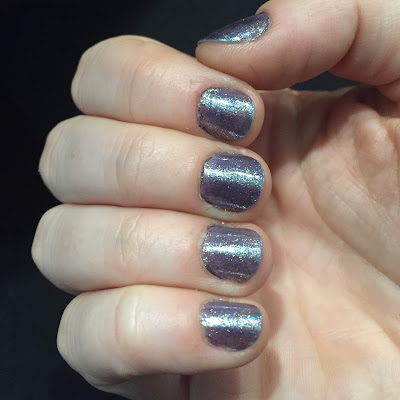 It's pretty enough, but I was expecting a deep jeweled effect, and this was sheer, watery, and practically pastel. Had I not been on my no-buy, I would probably have sought out a more opaque version of FeiFei; instead, I had to make do with layering, and I'm very glad I did. It turns out that FeiFei is the perfect topcoat for any dark, cool-toned creme-finish polish. Green, gray, blue, black—one coat of FeiFei transforms them all into a dark, complex blackened teal with a prominent gold shift. L-R: FeiFei, Essie Stylenomics, Topshop Wardrobe. 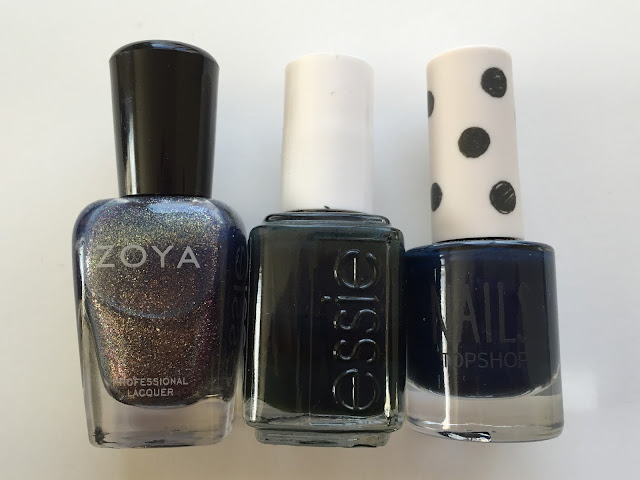 The first combo I tried was FeiFei over Stylenomics, a near-black forest green. 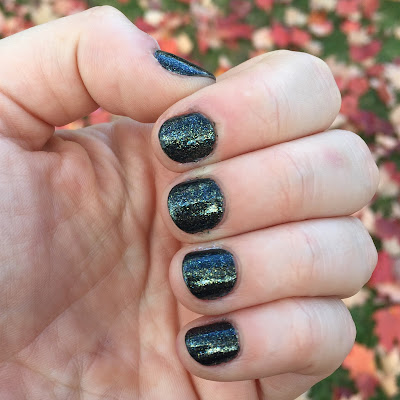 This combination lasted four or five days (a century by my standards), but full disclosure: it also stained my nails yellow. I was shocked: I'd used a base coat, and neither FeiFei on its own nor Stylenomics on its own had ever stained my nails. The only thing I can think of is that FeiFei made Stylenomics last longer than usual, and the duration caused the staining. Or maybe green nail polish stains more with age? Ugh.

A less ill-fated combination: FeiFei over Topshop Wardrobe, a dark navy. Surprise: it looks exactly the same as FeiFei + Stylenomics. Wardrobe applies nicely but also chips very quickly. I have yet to be truly impressed with a Topshop creme polish. 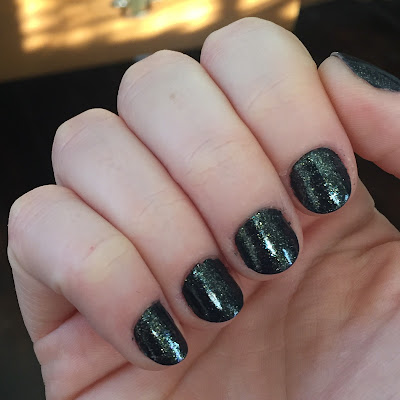 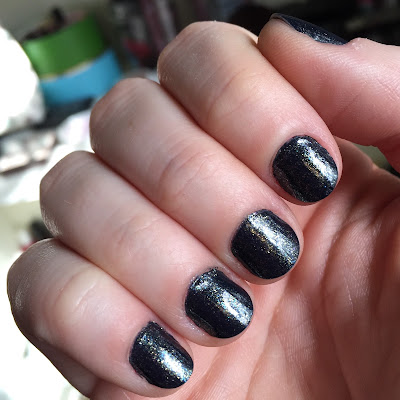 Next in my series of glitter discoveries was Floss Gloss Dimepiece, a fine silver holographic glitter. 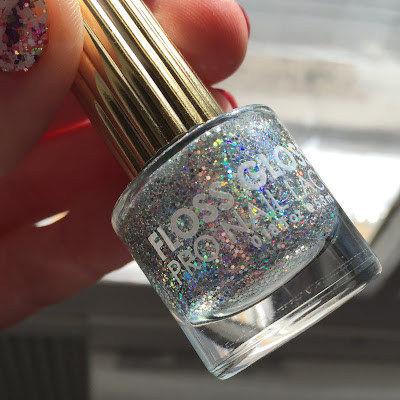 Despite its clear base, Dimepiece can be built up to near-opacity with three coats, but I tried that and hated the way it looked. I know, right? It was just a little too flashy, and the cool silver against my pinkish skin produced the dreaded lobster-hands effect. For my next attempt, I layered it over Essie Chinchilly, a medium gray with a hint of lavender: 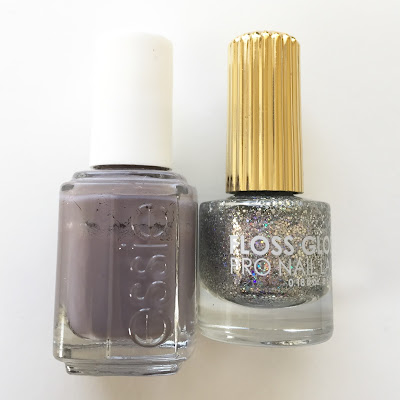 I used one coat of Dimepiece on the outer half of each nail, and was delighted with the result: 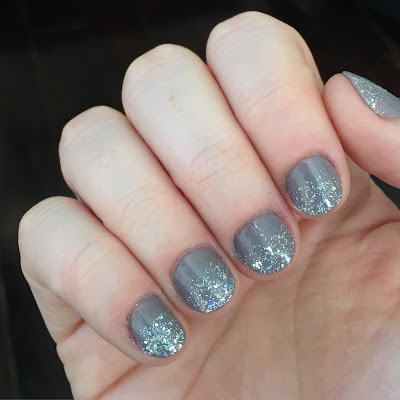 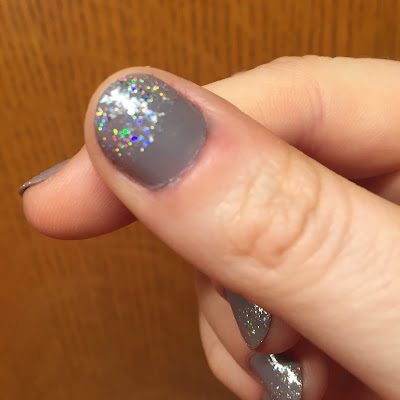 FeiFei and Dimepiece are both relatively fine glitters, but I've also developed a thing for chunkier glitter topcoats, especially over similar-colored creme bases. I don't wear them often now that the semester has started and I'm teaching again, but they're fun for the weekend (god I sound old), and I also like trying to make them as professionalesque as possible. The closest I've come is Essie Summit of Style, a cool-toned gold glitter, over Revlon Elegant, a taupe nude that I wear often in the winter. Essie's Luxeffects topcoats have a dense concentration of small and large glitter in a clear base; there's no need to fish in the bottle for extra glitter, but the tradeoff is that they do dry up more quickly than most glitters. 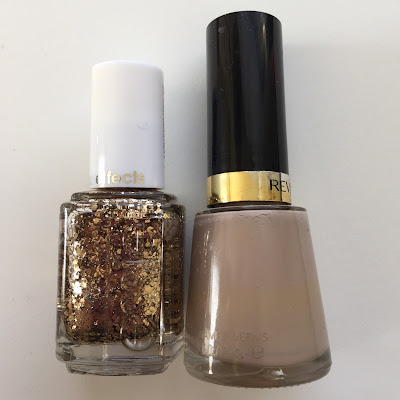 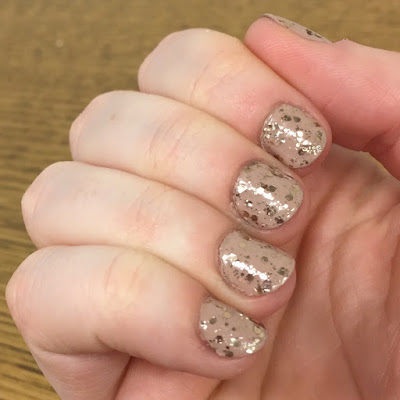 Finally, my most recent polish purchase: Urban Outfitters 11:59. It's $5 on the website, but it was marked down to $.99 when I bought it. I don't see many people talking about Urban Outfitters nail polishes, and I confess I haven't been impressed with their cremes, but I really like this glitter topcoat. It features different sizes of white, gold, and fuchsia glitter in a clear base; I have to do a bit of strategic dabbing to get decent coverage, but it's also relatively easy to build up the glitter to near-opacity, as shown here: 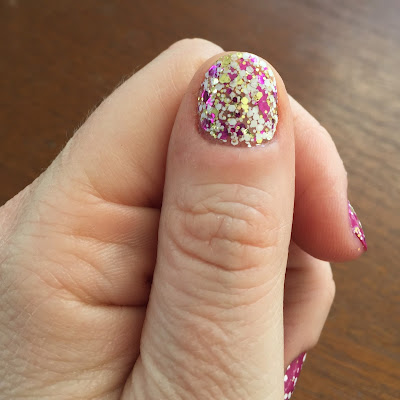 Chinchilly shows its versatility once again as a base for 11:59: 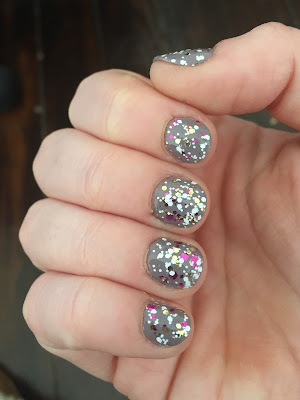 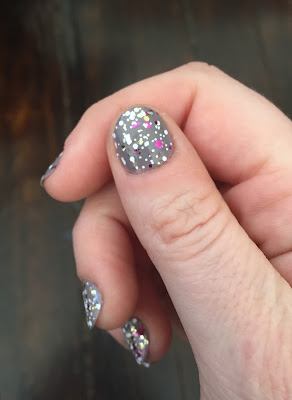 More recently, I made the happy discovery that the magenta glitters are an almost perfect match for the rich magenta of OPI Ate Berries in the Canaries... 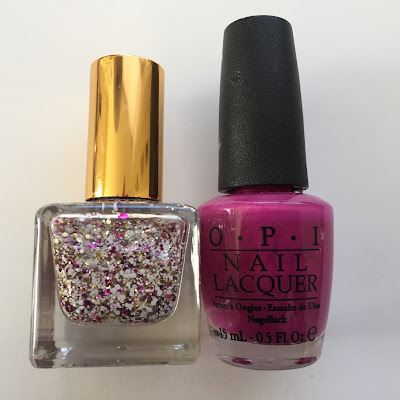 ...and layered the two for my Valentine's Day manicure: 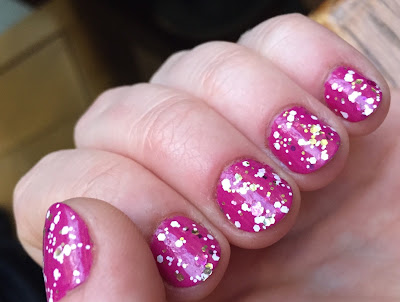 Happy Valentine's Day to you all! I hope it's warmer than 3°F where you live.
Posted by auxiliary beauty at 3:41 PM