I kept reasonably good tabs on new makeup releases last fall (self-destructively good tabs, even), but there were a few that escaped my notice. One new development was the addition of four shades to Revlon's line of Colorburst Matte Balms. The new colors are Enchanting, a pinkish beige; Fierce, a warm cinnamon brown; Fiery, a reddish berry; and Passionate, a purplish berry. The new additions make sense to me, since the Matte Balm line has always been short on neutral shades, but Revlon also discontinued a few colors to make room for the new ones. Dark purple Shameless and bright orange Audacious are missing from the website, and I've heard that pastel orange Mischievous is gone too, along with a few of the Lacquer Balms (my beloved Coy is safe for now).

Though I much prefer brown and berry lipstick to orange, it's always bittersweet to see color trends change. Remember when orange and coral were the trendy lipstick colors? When I first started paying attention to makeup, in the spring of 2011, all the beauty sites were singing the praises of orange as a more playful alternative to red. One of the first lipsticks I ever bought was Revlon Orange Flip. The original Matte Balm lineup featured three shades of orange. And now all you hear about is taupe, greige, and mauve (and soon, no doubt, other muddy portmanteaus like "grauve" and "maupe"), and meanwhile 99% of the world goes on its way completely unaware of these revolutions in taste. "You told me that brown lipstick was back," said a friend recently, "but I have yet to see anyone actually wearing it." Frankly, I'm not sure I have, either. It's hard to argue that a color is "back" when your only evidence is in cyberspace. Well, here's yet more online evidence: 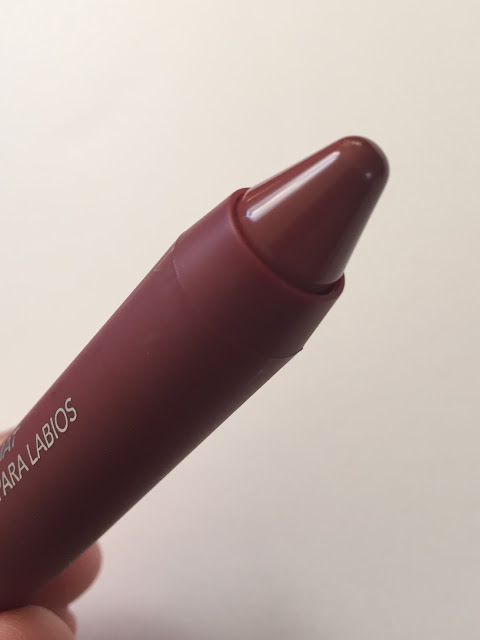 I was excited to hear about the new Matte Balms last month, because I'd had my eye out for a '90s reddish brown for some time. I couldn't find many swatches of Fierce, let alone full reviews, but I had reasonably high hopes for the formula: the best Matte Balms seemed to be the medium-saturation reddish shades like Sultry, Standout, and Unapologetic, and Fierce was another such color. So I searched in vain for my CVS coupon for $2 off a $10 Revlon purchase, cursed the forces of entropy that have always governed and will always govern my living space, and paid over $11 for a lipstick that goes for less than $7 at Target. Whatever. 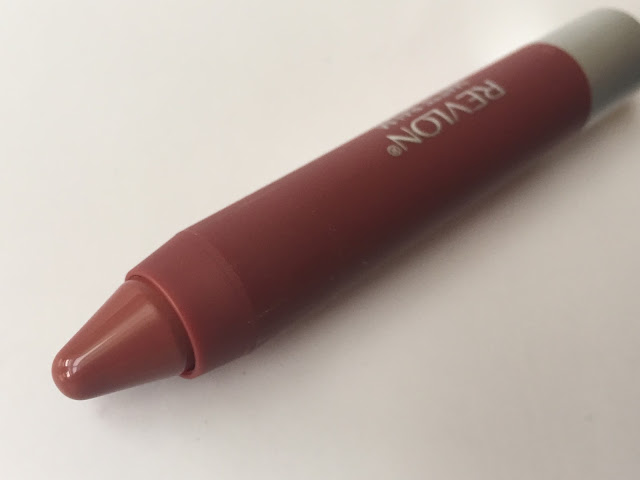 Instagram types love to refer to their beloved greige lipstick as "'90s" or "grunge," but trendy grayish taupes like MAC Stone are very mid-2010s. Most brown lipsticks in the '90s had a healthy dose of red or rose. To quote Cindy Crawford's 1996 makeup book: "The most flattering lipsticks bear some resemblance to your natural lips—nudes, roses, berries, and soft browns." That's soft browns, not purplish-gray zombie browns or almost-black browns. But it's interesting that most of us have this impulse to situate our makeup within a historical tradition. We don't want to admit to making things up as we go; we describe our looks as "mod" or "vintage" or "grunge" even when we're being thoroughly 2016.

Writing this, I'm reminded of the historian D. R. Woolf's reflections on historical thought in 17th-century England. (Can you tell I just turned in a dissertation chapter and am trying to decompress by blogging about lipstick?) "To suggest that something was an improvement was, generally speaking, insufficient," Woolf writes; "it had to be shown as a manifest return to a socially sanctioned past whose authenticity was not in doubt." I think our culture still retains this impulse, whether in politics or in makeup. I know I do; there's something comforting about feeling connected to the past, if only by a lipstick color (see also Essie's "Retro Revival" collection in honor of its 35th anniversary). I was eight for most of 1996, so forgive me if I'm wrong, but I think Fierce is the most truly mid-'90s of all the brown lipsticks I've tried. And I've tried an embarrassing number in the past year. 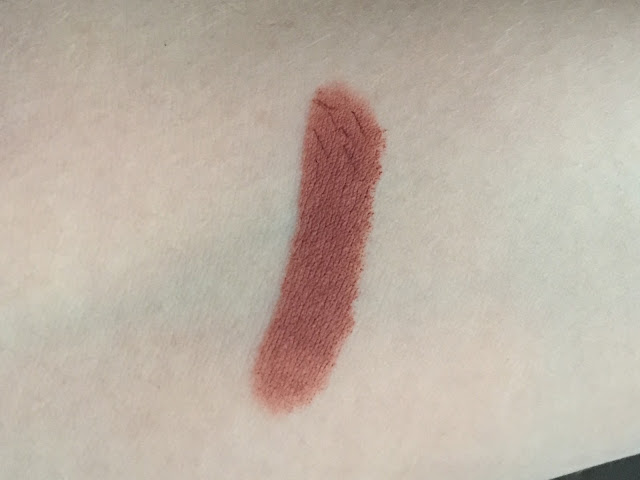 It turns out that Fierce is not quite as opaque as Sultry. This is one swipe; I find that I need two for full lip coverage, but no big deal. And speaking of an embarrassing number of brown lipsticks... 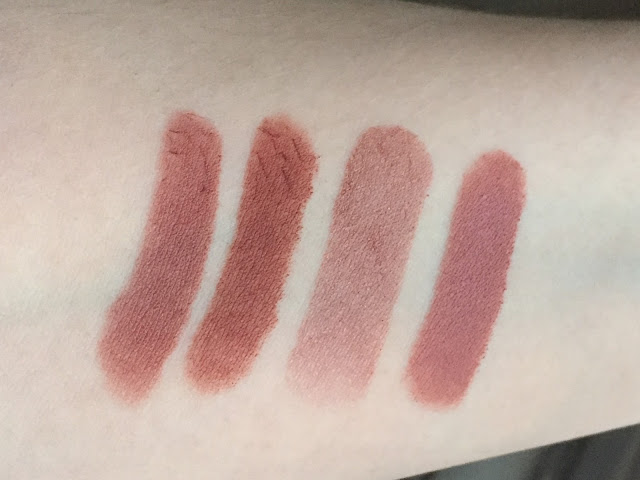 ...these are just my medium browns. L-R: Maybelline Crazy for Coffee, Fierce, Revlon Lacquer Balm in Coy, Topshop Lip Bullet in Motel. Fierce and Crazy for Coffee look almost identical when swatched on my arm, but Fierce is much more of a statement lip for me (especially when built up with two coats), while Crazy for Coffee is a deep MLBB. I've never been crazy for Crazy for Coffee: it washes me out a bit, and I think I'll be destashing it now that Fierce has made it somewhat redundant.

Under artificial light, for differences in finish: 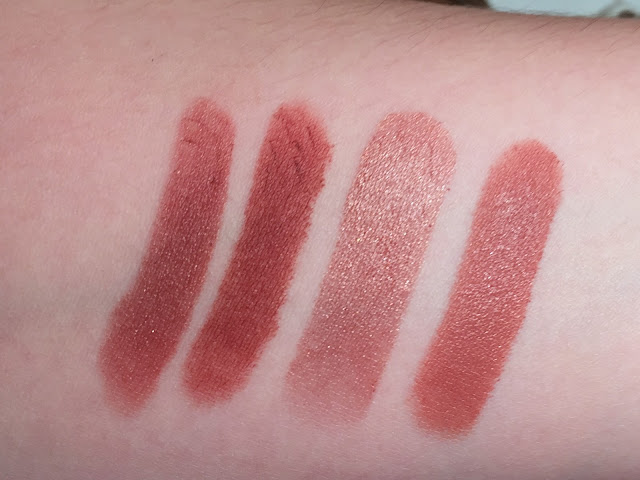 Fierce is the matte-est of the four, but like the other Matte Balms I've tried, it's not completely matte: it has a slight sheen when first applied, and it does transfer onto cups. If you're looking for a flat, transfer-proof matte brown, feel free to pick up one of the 938,574 brown liquid matte lipsticks released in the last year. Fierce isn't terribly long-wearing, either—maybe three hours before it needs to be touched up, which is about average for me.

Here's two coats applied over a bit of balm; as you can see, we're far outside MLBB territory. Fierce is one of those shades that just suit me; any lighter or warmer and it would look terrible, but through some trick of undertone, it escapes disaster. 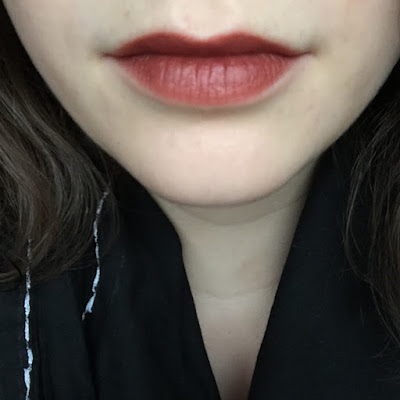 And here it is in the context of my whole face. Three shades from theBalm Nude 'tude on my eyes: Stubborn (shimmery neutral pink) all over the lid, Sexy (matte burgundy) on the outer third and in the crease, and Sophisticated (shimmery cool brown) on the lower lashlines. I've been diligently wearing Nude 'tude several times a week but have yet to hit pan on any new shades, which feels unfair. My blush is Sleek Flushed; one day I'll wear enough blush that it will actually be visible in a photo, and then we'll all celebrate. 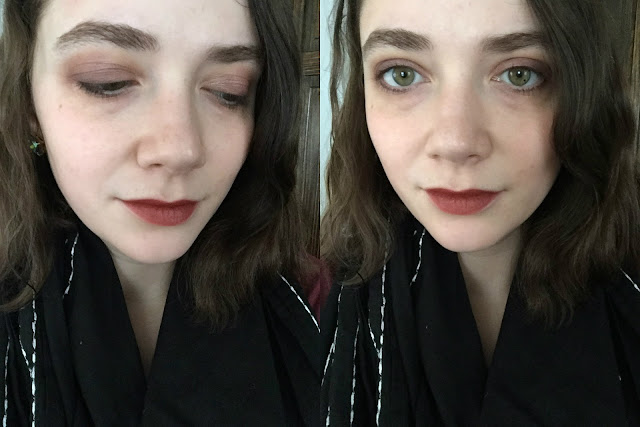 I rediscover cool pink makeup every February without fail, so I'm not sure how much more wear Fierce will get before spring sets in. In fact, I've already paid a visit to my local Bluemercury to swatch two NARS cool pinks: Gaiety blush (left) and Roman Holiday sheer lipstick. 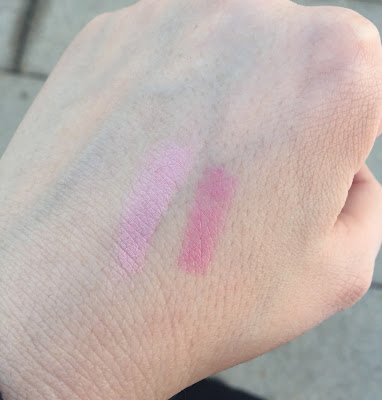 Then again, I've been enjoying this brown-lipstick phase, so you might see Fierce in a few more FOTDs before the weather warms up. Brown lipstick is back, right? Or has the entire Internet pulled a massive prank on me?

Posted by auxiliary beauty at 7:10 PM