It's the vernal equinox! It's also the coldest day in about three weeks, and it's snowing as I type this, just as it snowed on last year's vernal equinox. But I still think the first day of spring is a fine day to review a bright coral lipstick, so meet my newest beauty purchase: Marc Jacobs Le Marc Lip Crème in So Sofia. 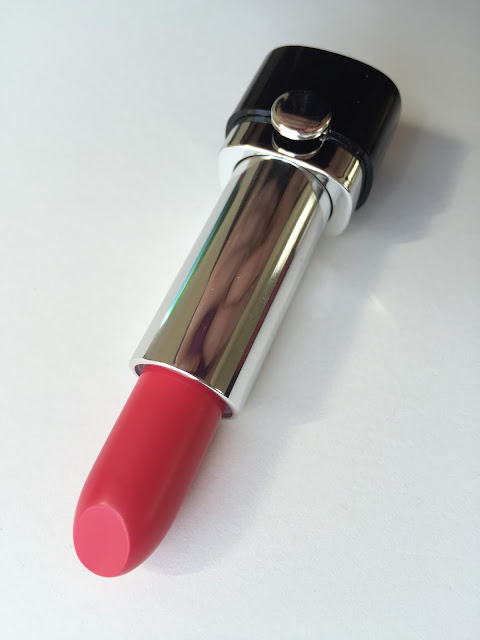 Earlier this week, I went to the Upper West Side Sephora in search of a coral-pink lipstick, something cooler than Maybelline Vibrant Mandarin and darker than Urban Decay Streak. My go-to coral-pink lip color used to be Milani Flamingo Pose (now discontinued), but I eventually tired of the drying formula and cloying watermelon scent. I entered Sephora fairly certain that I'd buy Bite's new Amuse Bouche lipstick in Pickled Ginger, but it turned out to be the Bad Kind of Coral, at least for me: too bright and too warm and just nope nope nope get it off my face. The Amuse Bouche line had a few other coral-pinks, but they were either too warm or too close to Streak. The formula seemed good, though: firmer and more opaque than the discontinued Luminous Cremes, with a light lemon scent. 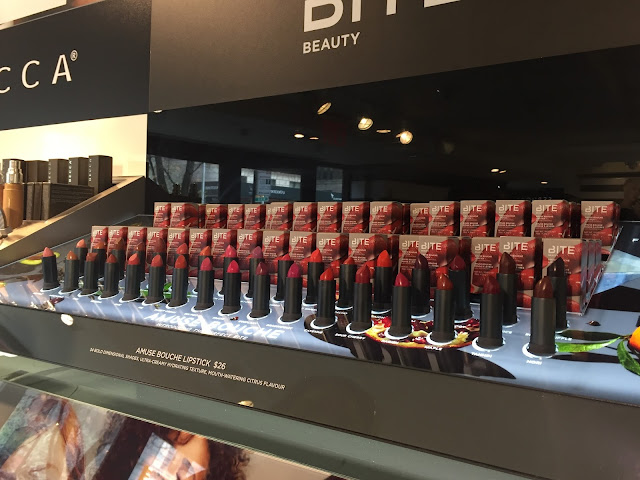 After our Bite experiments, my Sephora companion had to go work on her dissertation, so I walked her to a coffee shop across the street. Then I returned to make a quick circuit of Sephora, and suddenly I saw it: the exact shade of coral I'd been looking for, beckoning to me from the Marc Jacobs display. I'd never tried a Marc Jacobs product, but I knew the brand was cruelty-free and its lipsticks had received good reviews. I tried on So Sofia, felt 85% positive about it, decided that I could always return it if it proved unflattering outside the store, and handed over $30. Can you believe they were out of the much-vaunted 100-point perk, a mini Amuse Bouche lipstick in Radish? I have never managed to get a lip product as a 100-point perk. In fact, I haven't redeemed any Sephora points in ages because the good rewards are always gone. *sob*

The semi-matte Le Marc Lip Crèmes, of which there are 20, were released last summer. I thought they were meant to replace Marc Jacobs' original lipstick line, the Lovemarc Lip Gels, but you can still find those on the Marc Jacobs website (though not Sephora). The Lip Crèmes retail for $30 each, and Marc Jacobs does a pretty good job of making them feel like lipsticks worth $30 (whatever that might mean). The branding is elegant, if kind of unremarkable: a sleek black box with silver and white lettering... 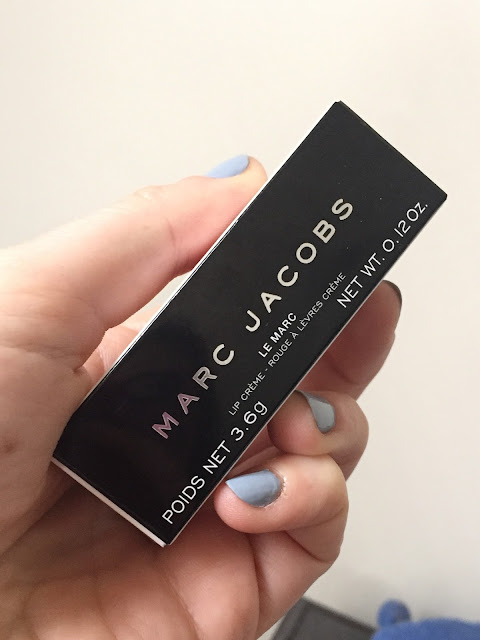 ...and a heavy black tube with silver accents. Like the NARS Audacious lipsticks, the Lip Crèmes snap shut with a magnet. Speaking of magnets, the shiny black lid attracts fingerprints irresistibly, so bear that in mind if that sort of thing annoys you. It doesn't really bother me. 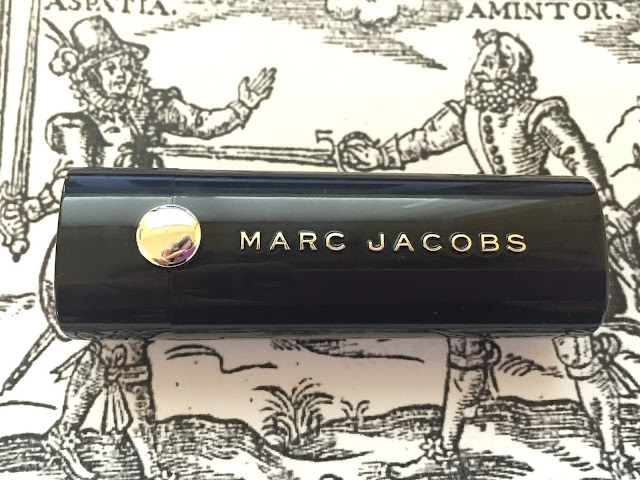 The tube is neither square nor round, but a distinctive squared-off ellipse. The name and color of the lipstick are printed on a handy label on the bottom: 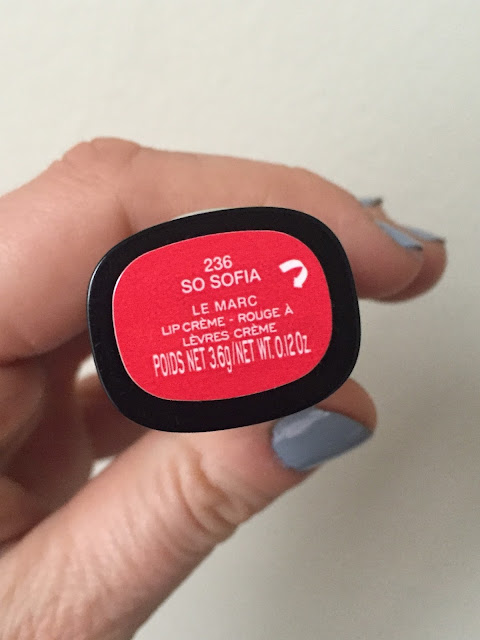 So Sofia is an intense pinky-red coral, along the lines of NARS Grace and MAC Relentlessly Red. It's almost too cool-toned to be considered coral, but there's an undeniable hint of midcentury orange to it. Like many lipsticks, it looks quite a bit lighter in the tube than it does on my lips. 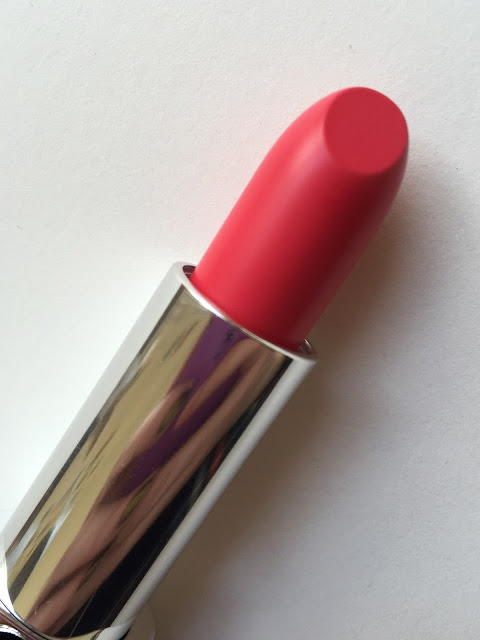 So Sofia is named after Sofia Coppola, and the shade actually resembles Kirsten Dunst's lip color in Coppola's 2006 film Marie Antoinette. I wonder if that was the inspiration! 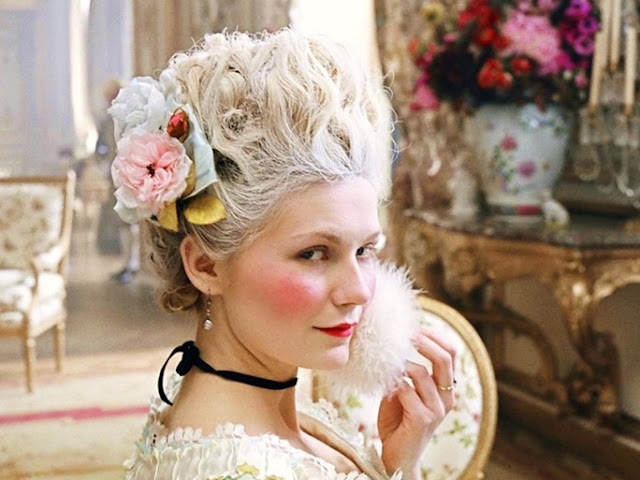 I still have Flamingo Pose hanging around the apartment, so I decided to do some comparison swatches. So Sofia (left) is darker and redder, but the two are definitely in the same family: 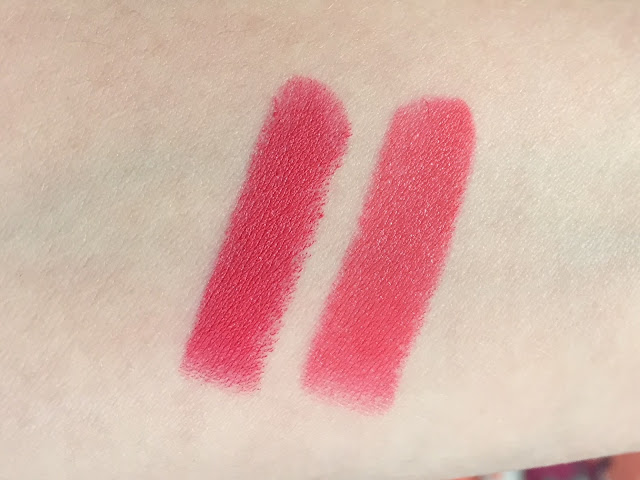 And here it is with a couple of my other hot pink and coral shades. L-R: Maybelline Vivid Rose, So Sofia, Flamingo Pose, Maybelline Vibrant Mandarin. 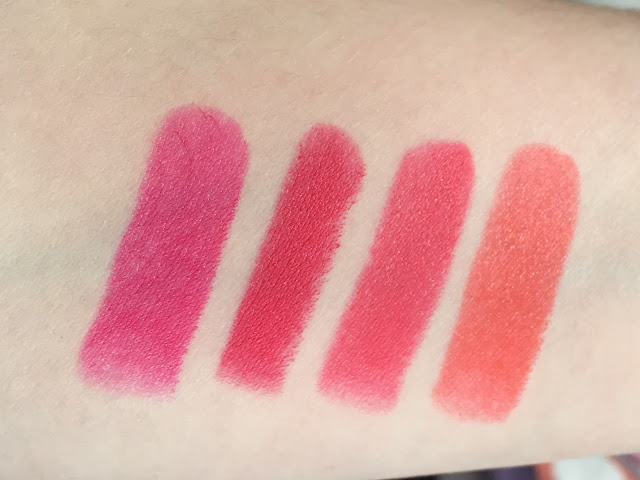 The formula is scent-free, taste-free, and very opaque. It starts out satin, then quickly sets to all-but-matte. It does transfer onto cups, but not egregiously, and it lasts several hours without drying out my lips. It does not, however, do a great job of disguising the dry patches on my lips, and it also stains a bit (as I'd expect from such an intense color). 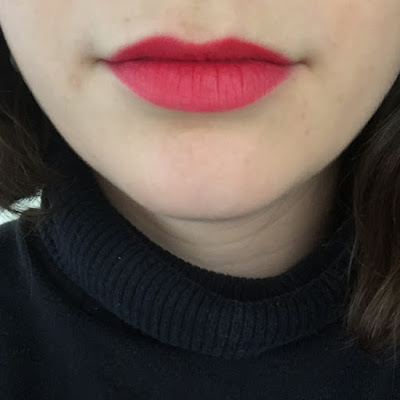 Here's the deal: I can't decide whether So Sofia suits me. I think it looks a tiny bit off against my skintone, but I'm not sure whether that's because it's actually unflattering or because I'm not used to wearing similar colors. Here it is with neutral eyes and Milani Coral Cove blush for added warmth: 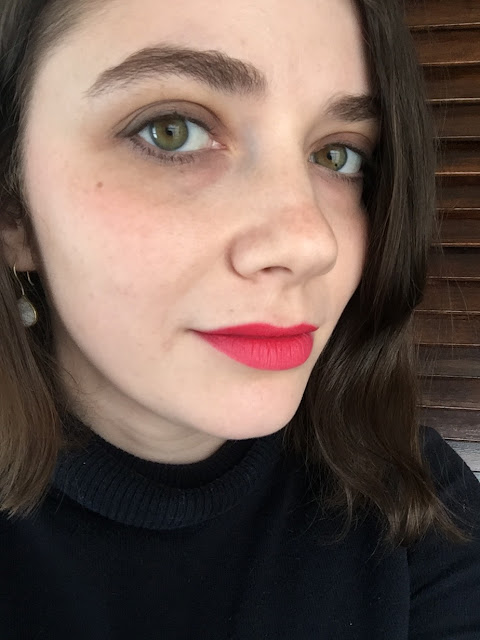 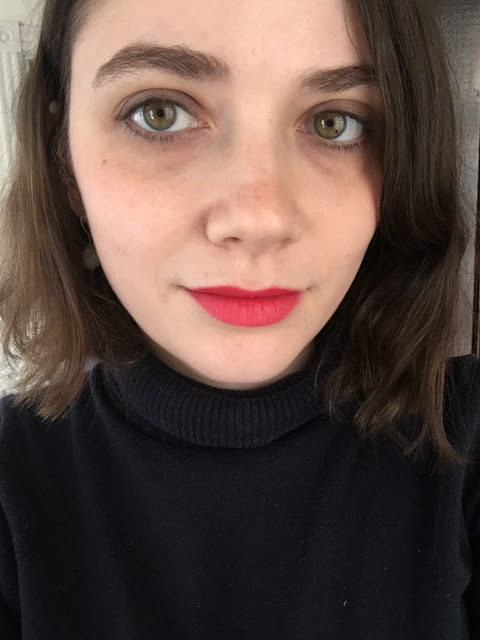 But I'm also fairly certain that if I return it to Sephora, I'll spend more mental energy searching for another, better coral-pink lipstick. I'm not going to be in the vicinity of a Sephora for another two or three weeks, so at least I have some time to deliberate. I posted about my conundrum on Instagram and got both "yes it looks great" responses and "you should return it if you're not sure" responses, so...hmm. Thoughts?

(Update: I've decided to return it next month, but I'll leave this post up, because the more lipstick reviews in the world the better. This is a great lipstick, just not a color that I personally need in my life.)

(Update #2: I just ordered Topshop's Matte Lip Bullet in Wink. I couldn't find reviews or swatches of it online, but I know I like the formula and it's 1/3 the price of So Sofia. Oh, and my mom doesn't like So Sofia on me because she thinks it makes me look "washed out," which is her criticism of any lipstick I wear that isn't a plum, purple, or red.)
Posted by auxiliary beauty at 4:38 PM