Into the Gloss has been one of my daily reads for at least four years, but I'll be honest: I've never loved it wholeheartedly. In fact, it's probably that frisson of irritation that keeps me coming back day after day. Where else can you find an endless string of naturally stunning women claiming that they're "super low-maintenance" and "don't wear much makeup"? Or Shailene Woodley explaining that "clay is great for you because your body doesn’t absorb it, and it apparently provides a negative charge, so it bonds to negative isotopes"? Or the obviously wealthy owner of an LA juice bar attributing its beginning to "God's grace" and not, you know, money? Or a French jewelry designer praising '70s-influenced makeup and adding in the next breath that eyeshadow is "so outdated" and shine on the lips is "not chic"? '70s Maybelline lady says what's up: 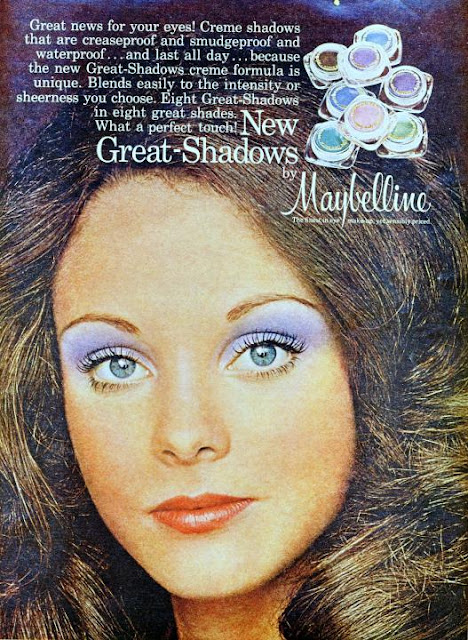 The launch of Glossier in late 2014 marked a new phase in my ITG love/hate-reading. The website quickly metamorphosed into a Glossier advertorial, which didn't exactly surprise me (why shouldn't ITG promote its own products?) but, at least for a time, dampened my reading experience. As if by magic, almost all of ITG's interview subjects—even the people living in countries where Glossier was unavailable—began singing the praises of the Perfecting Skin Tint and Balm Dotcom. ITG has since admitted that they "send out complimentary products to people we cross paths with who are inspiring to us, so they can see if they like our brand." Again, not surprising, but I wish they'd been more transparent from the beginning. I was also put off by Glossier's emphasis on "effortless" beauty (a concept I've discussed in more depth here), especially after CEO Emily Weiss revealed her pre-wedding regimen of cleanses, colonics, and microcurrent facials, all of which made her only "8/10 happy with how [she] looked." Kudos to her for being honest, but I wasn't the only reader struck by the disconnect between her brand and her actual lifestyle. If nothing else, it was a salutary reminder that the beauty industry is built on illusion.

Despite my skepticism, I couldn't deny that Glossier's branding was on point: emoji-style stickers, three-eyed smiley faces, and that signature shade of powder pink. Had I been the sort of person to try new skincare for the hell of it, I would probably have bought something from Phase 1, but I decided to wait for Glossier's makeup. It was a long time coming, but Phase 2 launched earlier this month. And Phase 2 contained lipstick. And in case you haven't noticed, I really like lipstick.

Glossier's Generation G lipsticks are meant to provide sheer but matte coverage for a "soft, popsicle-stained flush." They come in four colors: Cake, a beige; Like, a rosy pink; Crush, a raspberry; and Jam, a purple berry. Sheer lipstick is not my usual thing, but I do go through phases of wanting less-than-full-impact lip color, and I'm in one of those phases now. After watching the demo videos on the Glossier site, I felt myself drawn inexorably to Jam. I mentioned wanting it on Instagram, and guess what? Renee SENT ME ONE, along with the Glossier stickers and a tube of Balm Dotcom. I am truly #blessed. (She just reviewed Jam and Like, as well as Glossier's new Stretch Concealer, on her own blog. Check it out!) 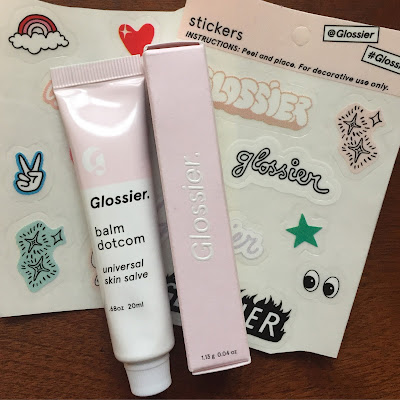 I am a sucker for a good box lining (see also MAC x Giambattista Valli): 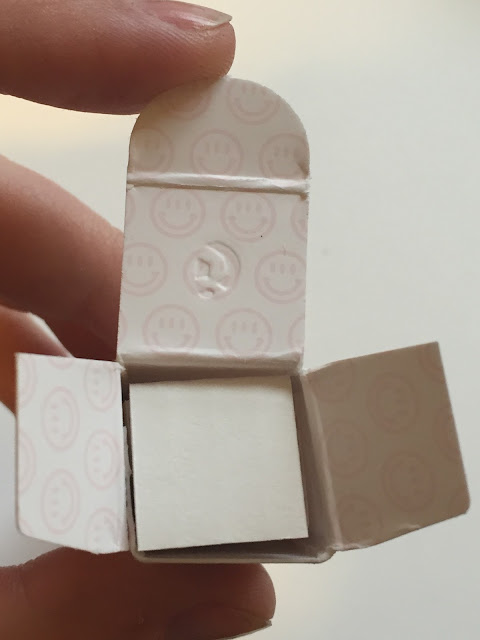 So sleek, so pink: 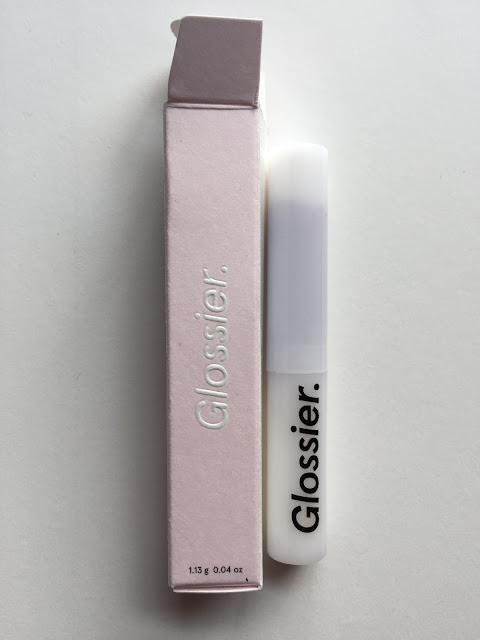 I want to know the story behind that typeface. Also, my advisor signs his emails with a period after his name (is that a British thing?), so "Glossier." makes me think of receiving criticism on my dissertation chapters. Great.

Let's get the criticism out of the way first. There are two areas in which I think Generation G falls short (literally): size and packaging. First, these lipsticks are very pricey for their small size. Each Generation G is $18 for 0.04 oz, or 1.1 grams: 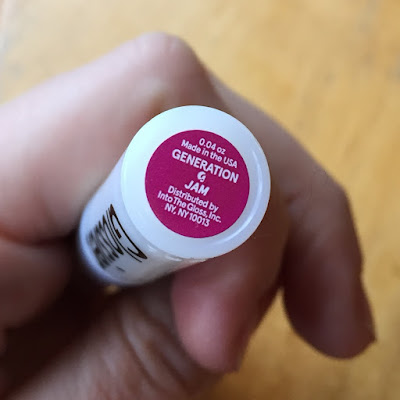 By contrast, a MAC lipstick ($17) is 0.1 oz, or 2.8 grams. That's right: 2.5 times larger than a Generation G at the same price point. The ColourPop Lippie Stix are about the same size as the Generation Gs (0.035 oz, or just under 1 gram), but they retail for $5. Now, there are lots of reasons why you might want to purchase a Generation G lipstick instead of a MAC or ColourPop: the sheer matte formula, the Glossier branding, a particular dislike for MAC or ColourPop, whatever. But you should know that though Glossier has mid-end pricing per unit, it has VERY high-end pricing per ounce. And because the sheerness of the lipstick means frequent reapplications, I can see myself reaching the bottom of this little tube quickly.

Second, the packaging. If I'm buying a lipstick that's $450 per ounce (no, seriously), I expect the tube to be both aesthetically pleasing and practical. The Generation G tube is mediocre in both respects. Yes, it has that minimalist Glossier sleekness and it snaps shut securely. But to my eyes, it looks more like a prototype than a finished product. Both the tube and the cap are actually translucent: you can see the bullet through the white plastic. 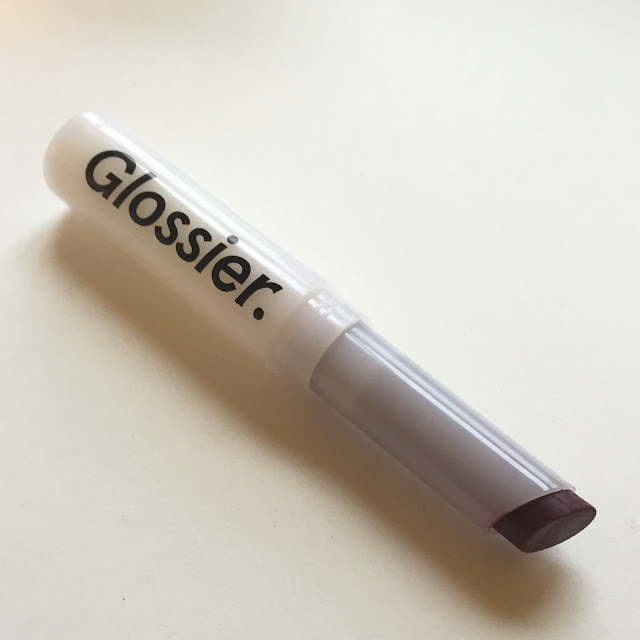 I'm kind of shocked that Glossier didn't put more effort into the packaging, given that the rest of its branding is so coherent. I'm all for beauty brands eliminating wasteful lipstick packaging (looking at you, Guerlain), but I doubt environmentalism was the motivating factor here.

The lipstick itself, though? Overall, I'm impressed. Jam applies smoothly and can be built up to near-opacity, though the texture of your lips will always be very apparent, for better or worse. Even at full strength, it doesn't do much to conceal flaws, but that also contributes to the breezy "natural" effect. Jam would qualify as an "unscented" lipstick, but I detect a very faint smell and taste that's halfway between herbal and plasticky, though not unpleasant. Here's one, two, and three coats of Jam on my (very dry, sorry!) lips: 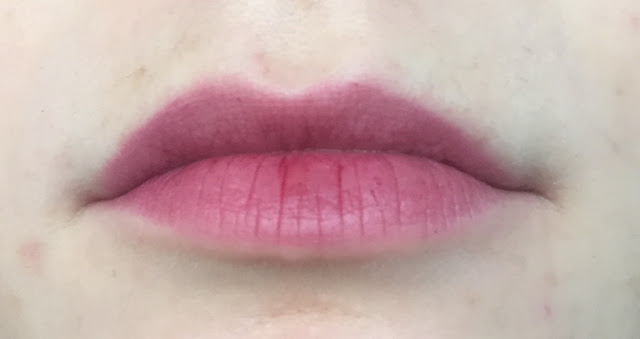 Basically, Generation G has the visual effect but not the lipfeel of a stain. It's sheer and matte like a Korean lip tint (though with a slight sheen), but it's much less drying than a tint or stain. The tradeoff is that it doesn't last as long as a stain: in fact, it has the longevity of your average sheer lipstick. Jam feels comfortable on my lips (if slightly gummy when I press them together) and is neither drying nor moisturizing. Below, I've swatched Jam alongside two other sheer plummy things. L-R: Revlon Lip Butter in Sugar Plum, one coat of Jam, two coats of Jam, Revlon Balm Stain in Crush: 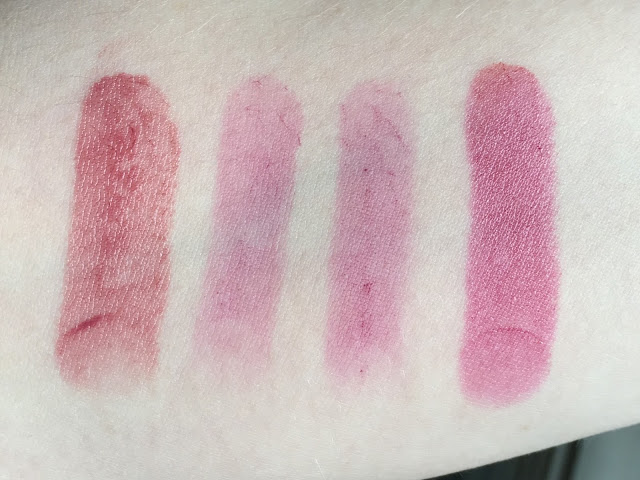 Jam and Crush are somewhat similar, but the Revlon Balm Stains are glossier (lol) and more opaque than the Generation Gs, at least when first applied. Crush fades to a bright pink, while Jam retains its color as it fades. It looks very vivid on some of the Glossier models, but it's a fairly muted plumberry on me. Jam is a nice spring plum, I think: not vampy or super-saturated. Below, I went for a Glossier-style messy-casual look: Maybelline Bad to the Bronze on my eyes, Illamasqua Zygomatic on my cheeks, and three coats of Jam on my lips. 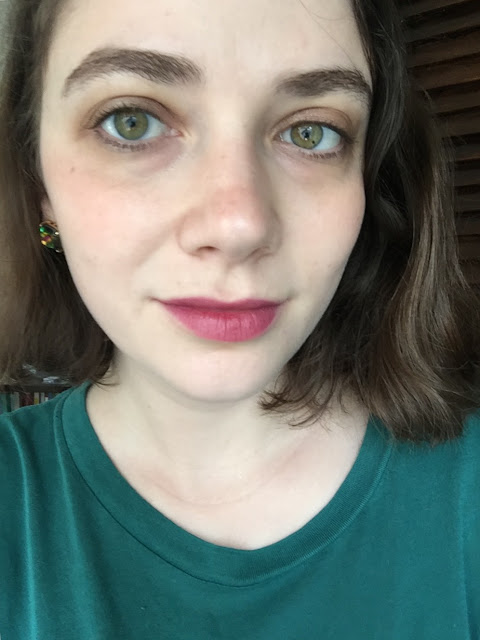 Then I tied my hair back because it was hella frizzy: 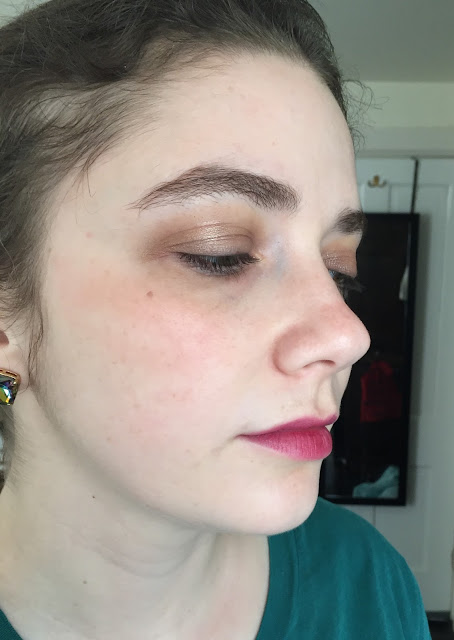 Do I like Jam? Yes! Will I wear it often? Yes, it's a great throw-on-and-go lipstick. Is it worth $18? That's harder to answer, because I didn't spend my own money on it. I think the matte stain effect is cool and kind of sloppy-sexy (which is Glossier's whole thing, of course), but the packaging is not what I'd expect from an $18 lipstick, let alone one that would cost almost $50 if it were MAC-sized. I doubt I'll buy another Generation G, but that's mostly because Crush is very similar to Jam, while the two lighter shades don't look like they'd show up well on my lips. I'd give Jam a 3.5 out of 5: it's a decent product, but not quite as revolutionary as promised ("no lipstick in the history of lipsticks looks like this").

But even if Jam isn't revolutionary, Glossier is. It's one of those beauty brands that capture the pop-culture zeitgeist of an era, like Mary Quant in the '60s or Biba in the '70s or Bobbi Brown in the '90s. My mom still talks about the pastel Mary Quant lipsticks she wore in high school, and I suspect we'll still be talking about Glossier decades from now, and perhaps ColourPop in the same breath. Despite their superficial differences (no-makeup makeup vs. Instagram-tastic glitz, model endorsement vs. YouTube guru endorsement), both brands have harnessed social media for product development and publicity, and the results have been astonishing. Love them or hate them, Glossier, ColourPop, and other web-based brands are taking the beauty industry in new directions, and I'm curious to see what will happen next.

Oh, and let me mention the fate of the stickers. God, I love stickers. I still have my Sanrio sticker books from the mid-'90s, full of glittery, fuzzy, and iridescent stickers that I received from other kids during impassioned trading sessions. Glossier has tapped into that '90s-kid nostalgia with its own stickers, some of which I tried to put on my lipstick tube. They didn't stick (the tube was too narrow), so I moved them to flatter surfaces: 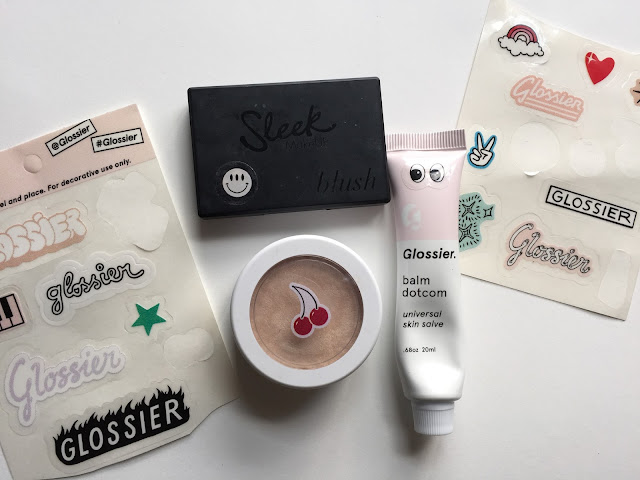 I also put a few on the back of my iPhone case, but I can't photograph that because I take all my pictures with my iPhone. My last name begins with G, so I was particularly happy to stick the G sticker to my phone. INSTANT MONOGRAM. Thanks, Glossier. And many thanks to Renee for her kindness! <3
Posted by auxiliary beauty at 7:32 PM