In addition to the Ultra Matte Lip in Trap, I bought three potted products from ColourPop last month. After a few weeks of playing with them, I'm excited to finally write a review! I'll start with an overview of each item, then post a few looks I've put together.

Clockwise from left: Super Shock Cheek in Rain ($8) and Super Shock Shadows in Shop and Eye Candy ($5 each). 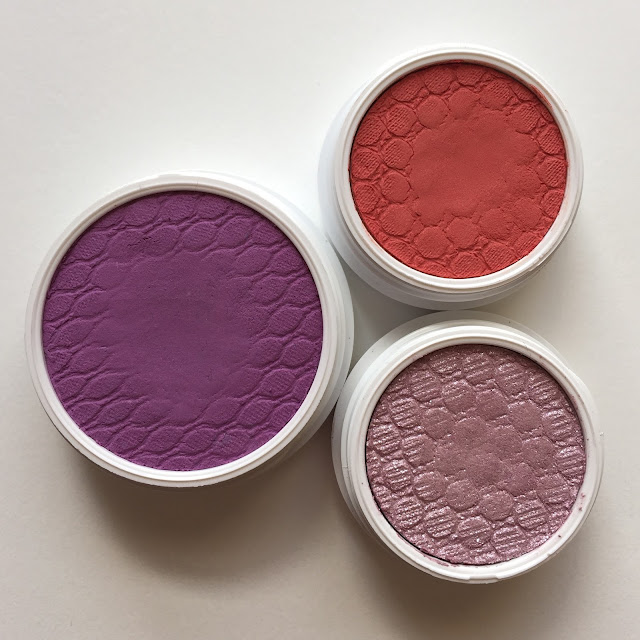 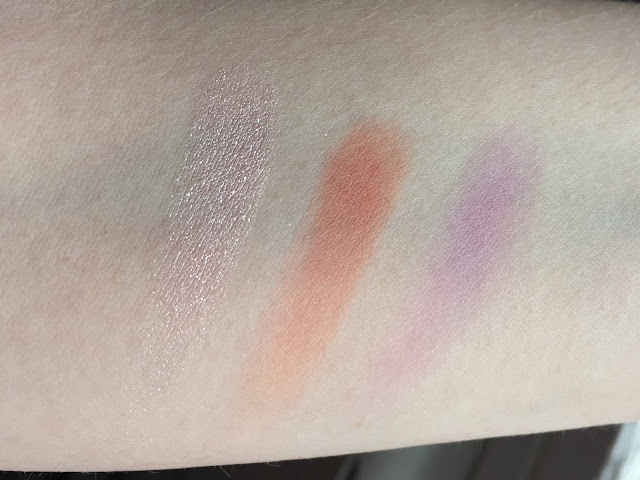 When I ordered Eye Candy, an "ethereal lavender drizzled with tons of pink and silver glitter," I knew from experience exactly what I would get: an unabashed glitterbomb. 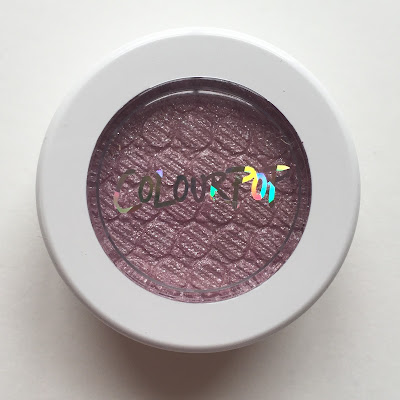 Eye Candy's base color looks like a sheer dusty pink in the pan and in arm swatches, but it pulls more lavender on my lids. That sheer base is crammed, not drizzled, with fine pink glitter and chunkier silver glitter. You really have to squint to see the pink glitter, and only the silver comes through when the shadow is worn. 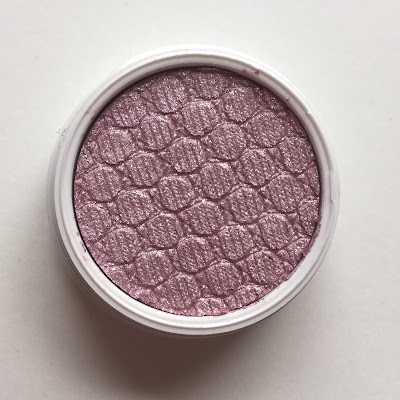 Eye Candy has the same bouncy, moussey texture as the other Super Shock Shadows I've tried, but the base color is less pigmented and the large glitter makes the texture a bit gritty. I don't actually mind the sheerness: it means that Eye Candy works well as an accent color over a variety of base shades. I would not, however, recommend wearing it all over the lids. I did that yesterday, with NARS Lhasa blended into the crease and outer V, and the base shade faded quickly, leaving me with almost nothing but glitter. N.B.: if you want to avoid fallout, don't even think of wearing Eye Candy without a primer, which I also did yesterday for experiment's sake. Four hours after application, there was almost as much glitter on my cheeks than on my lids. I was returning from a Baroque concert (Monteverdi, you guys!), but I looked more like I'd spent the afternoon at a "sixth-grade dance in 1999" theme party. With primer, there's less fallout, especially if you use Eye Candy just as an inner-corner or mid-lid highlight.

ColourPop describes Shop as "rusty coral in a matte finish" and adds, "shopping is cheaper than a psychiatrist!" Not to poke holes in this flawless logic or anything, but my psychiatrist's copay is exactly the same as the free-shipping minimum on ColourPop's website. And if you buy dozens of ColourPop products at a time, as some people seem to do, well. Allow me to take this opportunity to say that retail therapy is not an appropriate treatment for mental illness and, in many cases, it's far more expensive. Come on, CP. 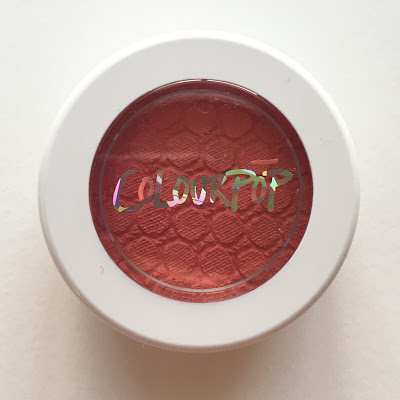 Problematic description aside, Shop is a great eyeshadow. It's an unusual color for a shadow: an intense but muted orange-leaning coral. Because it's not neon, as so many corals are, it pairs well with neutral shades. It's the most pigmented of the three products I'm reviewing today, and the color applies smoothly and wears for hours without fading. It's actually hard to wash the orange off my fingers after application! (Just as a reminder, ColourPop recommends applying its cream products with fingers instead of brushes. Once they're on the lids, though, it's pretty easy to brush-blend CP shadows into other brands' powder shadows.) 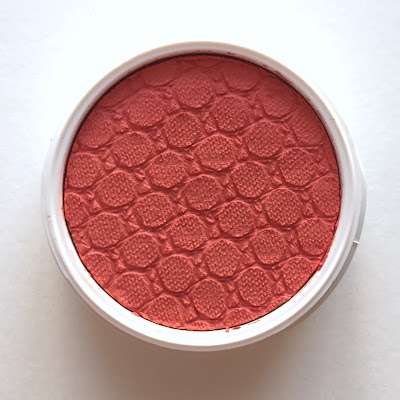 Shop appears very matte in this photo, but direct artificial light tells another story. In fact, Shop is sprinkled with fine gold glitter! Instead of sparkling on the eyelids, it provides more of a vague sheen. I suppose if you want a subtle satin finish from ColourPop, you need to order a "matte" shadow. 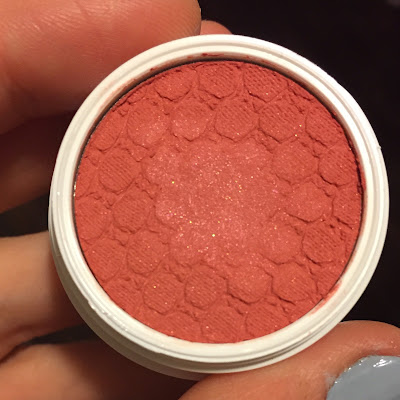 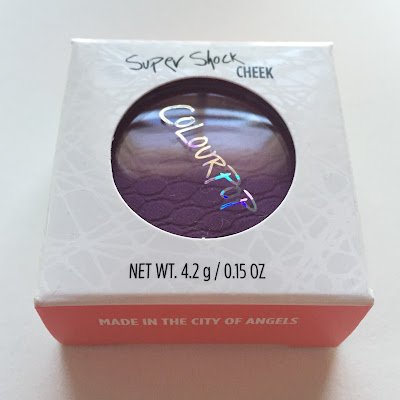 I'm a little skeptical of that 4.2g claim (NARS blushes, by contrast, are $30 for 4.5g). I've seen photos indicating that ColourPop's blush pans are just as shallow as their eyeshadow pans, and I wonder if ColourPop sneakily included the weight of the packaging in the 4.2g figure. I wish I had a scale so I could find out for myself. 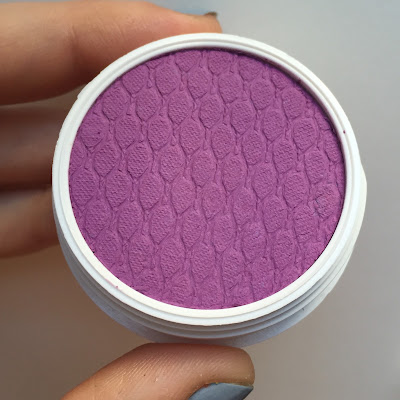 Rain is my first ColourPop blush, and I was surprised to find it drier than the shadows and highlighters I'd tried. It feels slightly more like a powder than a cream, yet I wouldn't recommend applying it with a brush: when I tried that, the color stuck to the bristles without making the leap to my skin. My cheeks are quite dry in general, and even when I'm applying Rain with my fingers, I feel like I really need to work it into my skin so that it doesn't just sit on top. I'm also a little disappointed in Rain's pigmentation: I need two or three layers for the look I prefer, and I don't even like wearing a lot of blush. However, the sheerness does make Rain more versatile, which I appreciate. It's not a costumey blush at all, yet it can easily be built up to opacity. It's not exactly a mindblowing product, but it's very workable and I anticipate wearing it a lot this spring.

I didn't bother making comparison swatches for the eyeshadows because I own nothing else like them, but Rain has a few distant cousins in my blush collection. L-R: Tony Moly Milky Violet, one layer of Rain, two layers of Rain, Urban Decay Rapture, NARS Mata Hari. 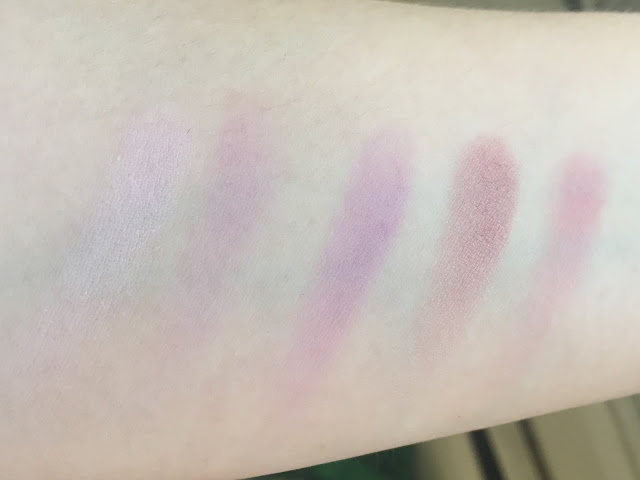 On my cheeks, Rain has exactly the pastel-candy effect I wanted from NARS Gaiety, which means that I can cross Gaiety off my wishlist for now! Here's three layers of Rain concentrated on the apples of my cheeks; I'm also wearing Urban Decay Frisk (pale matte gray) and ColourPop Cowboy (matte lavender) on my eyes and MAC Pink Nouveau on my lips. 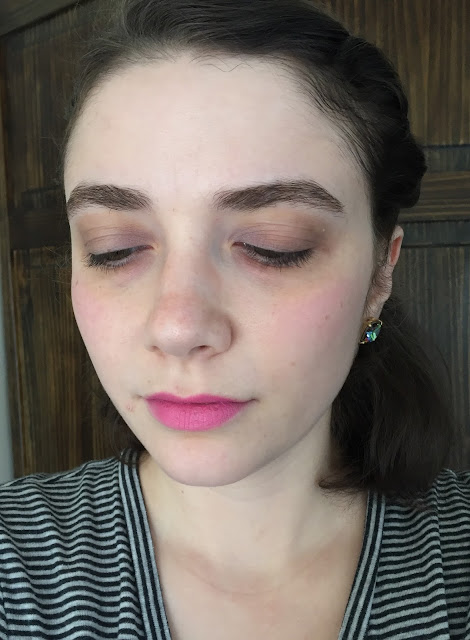 Here's Shop as the focal point of an eye look: I smeared it all over my lids and blended it out, then lined my lashlines with a bit of theBalm Serious, a matte black. Blush is Sleek Life's a Peach; lipstick is NARS Dolce Vita, which usually looks less peachy than this. 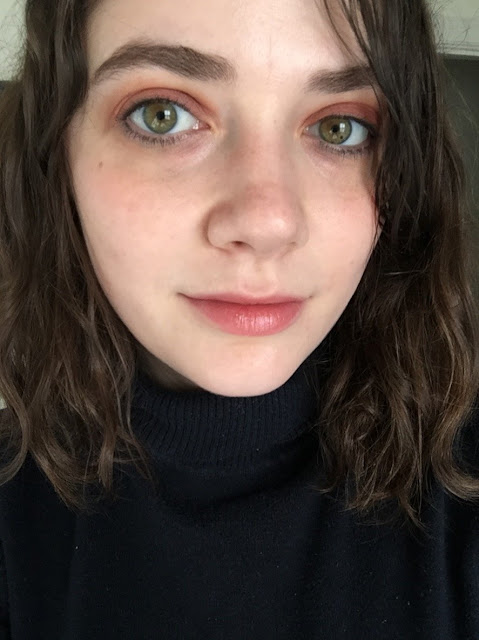 Lhasa (I think? why don't I take better notes? or any notes?) and Eye Candy on my eyes, a lighter application of Rain on my cheeks, and ColourPop Trap on my lips: 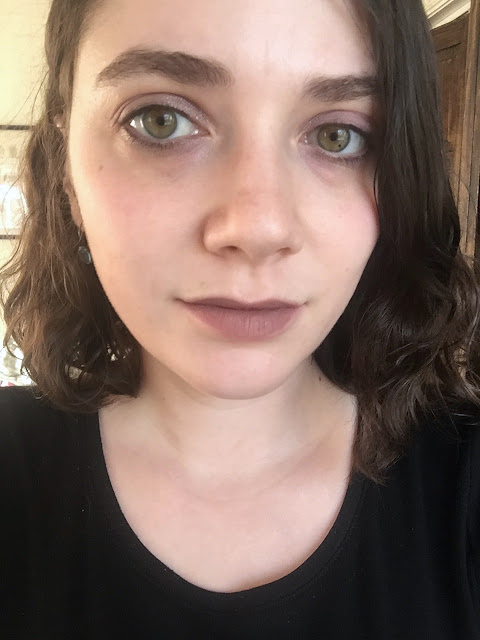 March promises to be a busy month (applications, grading, a conference in Boston, and maybe my own work if I'm lucky), so I'm not sure how often I'll be able to post here. At least we're well on the way to spring, the season when hope returns to us all—that is, if we don't pay too much attention to the presidential campaigns.

Posted by auxiliary beauty at 9:34 PM