Glossier Boy Brow in Brown, and Some Brow-Related Bloviation

It's been so long since my last post! I've just been too busy to blog, despite having a pile of things to review and the desire to review those things. It's really a terrible feeling. The science-fiction class for which I'm a TA had two paper deadlines in two weeks (don't ask me why), so I was doing what felt like nothing but grading for what felt like forever. But now that my grading is done and classes are almost over, you can expect more frequent posting in the weeks to come! First on my to-review list is a product I'm very excited about: Glossier Boy Brow in Brown. 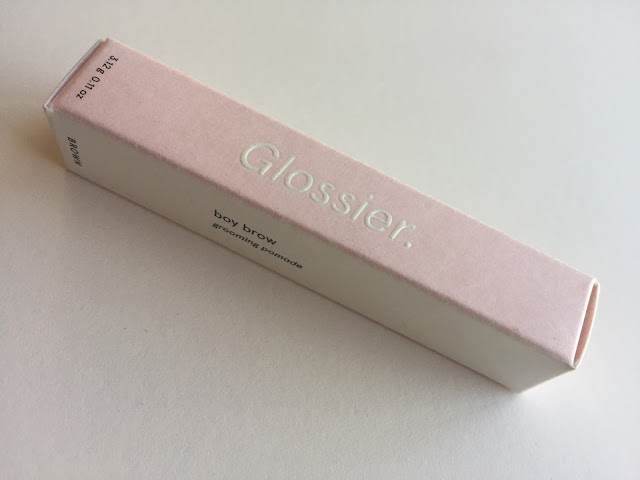 I haven't written much about my eyebrows on this blog, because I don't like doing much to them. I'm very grateful to my past self for not overplucking my naturally thick, dark brows, as so many girls and women did when thinner brows were popular. I'm young enough to have missed the heyday of sperm brows, but their baleful influence lingered for years. When I was a teenager and young adult, the socially acceptable brow was much thinner than it is today. My natural perversity ensured that I refused to pluck my eyebrows at all, even after a college friend literally held me down and removed my stray brow hairs to prove how much better I'd look with cleaner brows. I didn't have a lot invested in being a ~nonconformist~ or whatever, but I liked my natural brows and disliked beauty rituals that caused physical pain. So I continued to shun tweezers, and then, about three years ago, a miracle happened: thick brows came back into fashion. Suddenly the eyebrows my father's entire family inherited from some hirsute French ancestor were cool. I couldn't believe it.

For a while, I didn't feel the need for brow products or any kind of maintenance, but around 2014 I noticed that it wasn't just thick brows that were in fashion, but thick, well-groomed brows. I also realized that my college friend had been right: my whole face looked better when I cleaned up the stray hairs that lay outside the natural arch of my brows. I bought a clear brow gel from Milani and experimented with filling in my brows with different brown eyeshadows, eventually settling on Primal from Urban Decay's Naked2 Basics palette (second from right below). 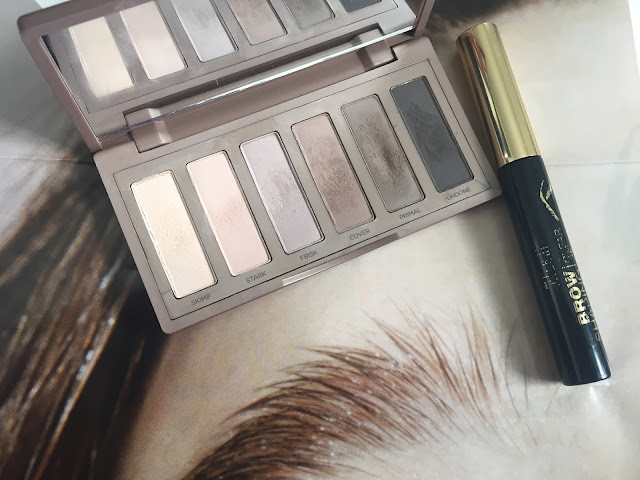 And that was my routine until very recently: dab a bit of Milani gel on both brows, use a different spoolie to brush the gel through (the Milani one deposits way too much product), and do a quick fill-in job with Primal and an angled brush. This method gave me the effect I wanted, but it wasn't terribly convenient: if I was taking a short trip, I had to bring the entire Naked2 Basics palette with me, even if I didn't plan to use it for anything but my brows. So when Glossier's Boy Brow came out late last year, I took note: here was a single product that promised the same subtle effect that I tried to achieve every morning with my clear gel and powder shadow. But I never got around to buying Boy Brow: the $16 price tag was a factor, as was the fact that it sold out eventually and returned only last month with Phase 2, but the biggest factor was that annoying name. (For the record, I find the faux-French pronunciation of "Glossier" equally annoying.) 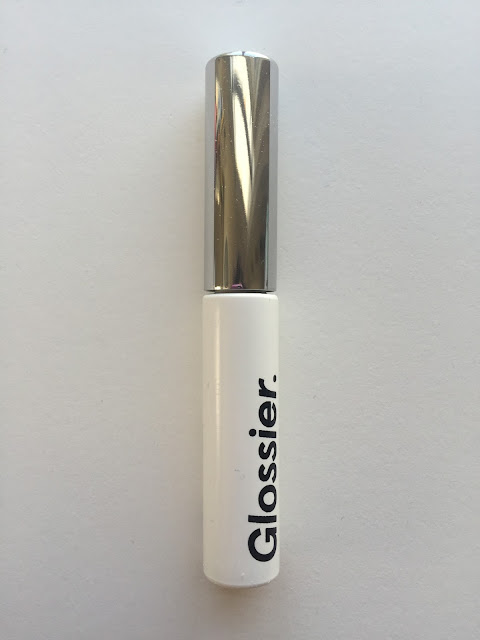 As you know, I've long been skeptical of Glossier's emphasis on "effortless beauty." I resent the brand's continual insinuations that true "cool girls" should look perfectly smooth and dewy and disheveled with minimal effort. Not only does this position fetishize extreme youth, it also dismisses as "uncool" the real effort that so many women put into their appearances, often because society gives them no choice. The phrase "Boy Brow" goes even further by holding up men as paragons of effortless beauty. Yes, most men have thicker, wilder brows than most women, and one of the reasons is that they face no social pressure to groom their brows. A beauty product that promises to make women look more like men is just as insulting as a beauty product that promises to make women more attractive to men. Why do men have to be part of the equation at all? Why can't women have natural-looking messy brows that aren't "boy brows"? You may think I'm overanalyzing a silly phrase, but, well, overanalysis is kind of my job. Also my eyebrows are much thicker and darker than my boyfriend's, just saying.

Despite all my cavils, the product itself continued to tempt me. I'm not sure how long this ridiculous internal standoff would have lasted had Renee not sent me a tube of Boy Brow in Brown (one of three colors, the other two being Blond and Black) and a Generation G lipstick in Cake, a peachy beige. I got the entire iconic Glossier package this time, complete with the brand's debatable but catchy tagline and one of those coveted pink bubble mailers: 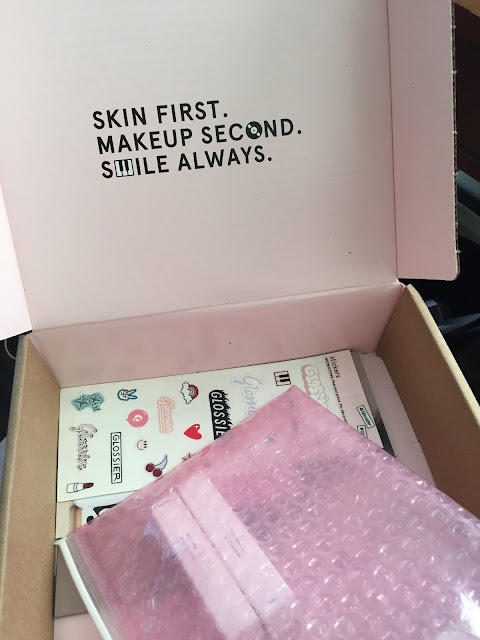 The package included more stickers, as well as a sample of Glossier's Priming Moisturizer with about three uses' worth of product (spoiler alert: nice but nothing special)... 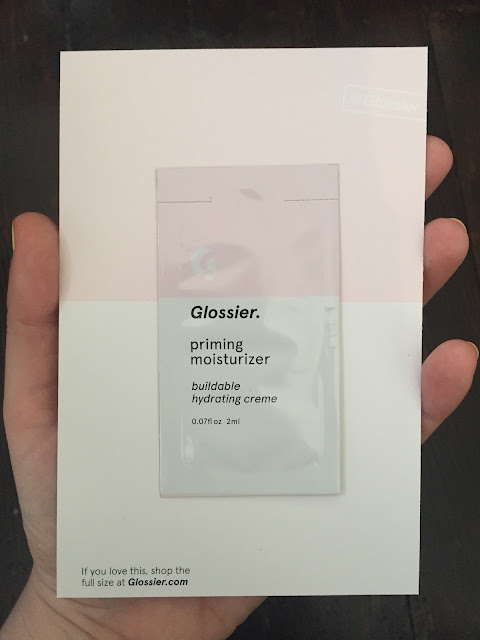 ...and a poster featuring an extreme close-up of a dewy-skinned model's face (complete with nose hairs: full points for gritty realism). I am not entirely sure why this poster exists. 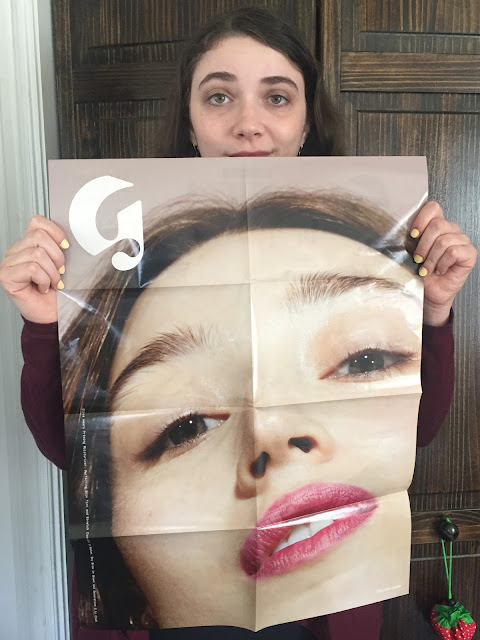 Glossier describes Boy Brow as "not an eyebrow gel or mascara—it's the first-ever brow pomade." That seems like a matter of semantics to me, but there's no denying that Boy Brow does what Glossier promises it will do: "thickens, fills in, and shapes hairs all at once." The bottle is tiny, but it holds 3.12 grams, making it almost three times the size of Glossier's Generation G lipsticks. Here's Boy Brow next to a Revlon Matte Balm for scale: 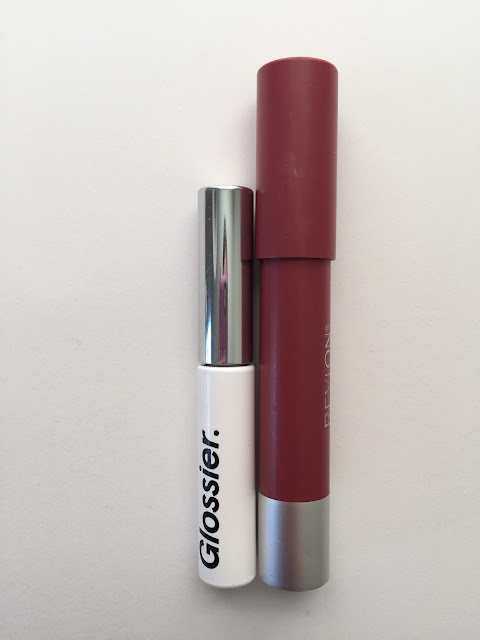 The brush itself is very small as well, with short, stiff, densely packed bristles. Here it is next to Milani's brow gel spoolie: 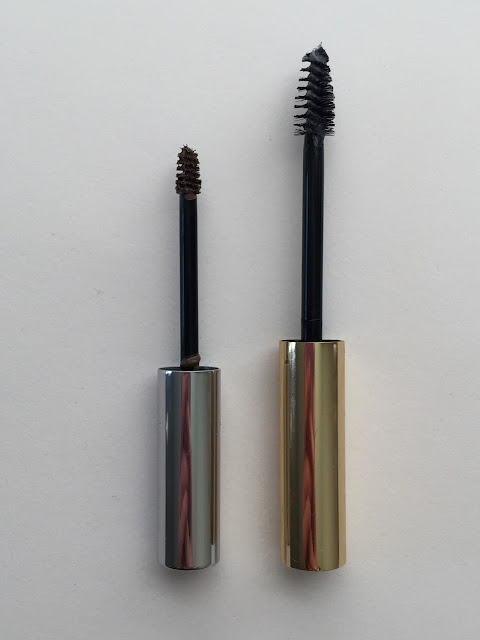 I'd describe Brown as a neutral medium brown. It's lighter than my natural brows, but not by much (plus, you want to use a product slightly lighter than your brows). The formula itself is thin and translucent; you get a good amount of product per swipe, but not an overwhelming dose of pigment. 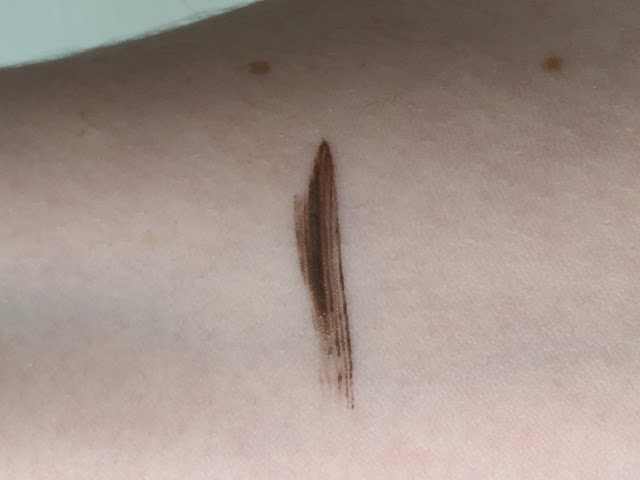 It's been said before, but it's worth reiterating: Boy Brow is good for people who have naturally thick brows and/or people who want a subtle effect from their brow product. This pomade (I prefer to call it goo) will not give you on-fleek Instagram power brows, though it can be built up for more opacity. Personally, I think most people look great when they embrace their natural brow thickness or thinness, but if you have sparse brows and want a dramatic change, you should look elsewhere. I have a lot of brow to work with and I don't want super-filled-in brows, so Boy Brow is perfect for my needs. Here are my brows without (top) and with Boy Brow (and no other makeup—say hello to my dark circles): 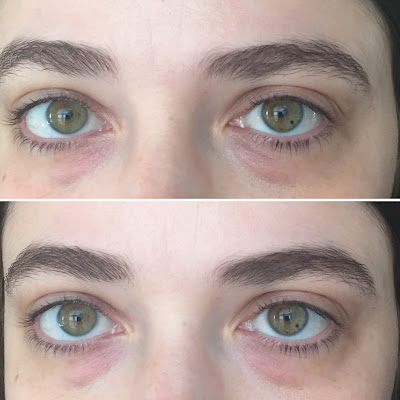 Not a huge change, but a noticeable one, and exactly the amount of change I want. Boy Brow softly shapes and tints my eyebrow hairs and colors the skin below my eyebrows (keep in mind, I'm extremely pale), and it lasts all day. I can't ask for much more than that.

And for some context, here's today's aggressively boring face, inspired by, uh, having only a few minutes to do my makeup before going to teach Watchmen: 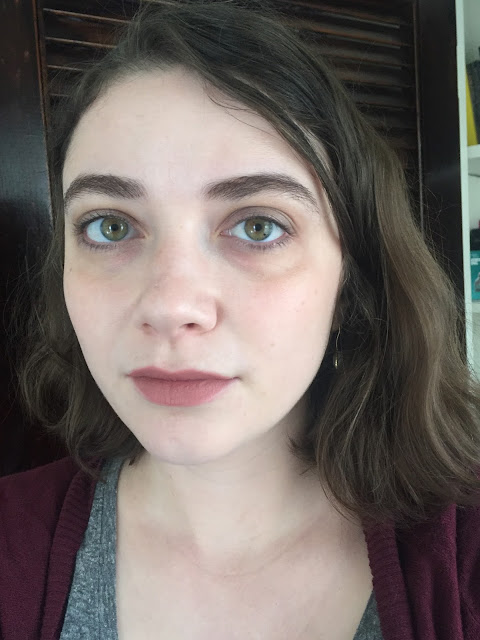 Another shot of Boy Brow with a slightly more interesting look featuring NARS Lhasa and Habanera eyeshadows, the same Zygomatic/Lunch Money combination, and ColourPop Ultra Matte Lip in Trap. As you can tell, I'm wearing a lot of off-nudes these days. 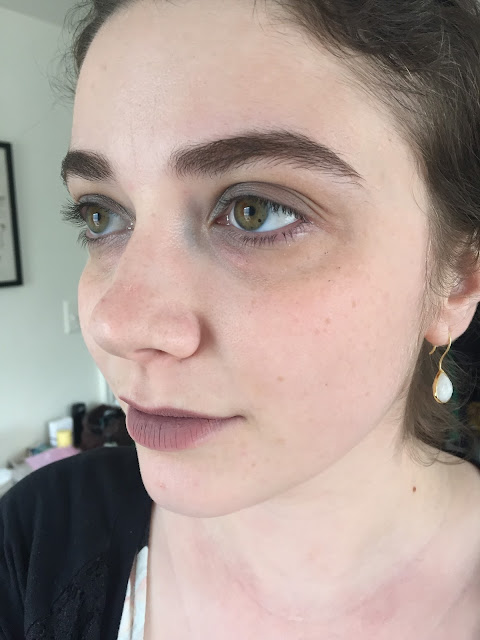 I don't have much more to say, except that I'm definitely going to repurchase Boy Brow when I run out. Fine, Glossier. You win.
Posted by auxiliary beauty at 7:28 PM