I own between 55 and 60 lipsticks, more than a few of them purple. It's rare that a mainstream brand releases a lipstick unlike any I own, and even rarer that a mainstream brand releases a purple unlike any I own (yes, I'm using a lipstick junkie's definition of "unlike," but still). So when Bite Beauty announced that it was expanding its newish Amuse Bouche line with six new shades, one of them a luminous blue-toned lavender that looked like no purple lipstick I'd seen before, I took notice. 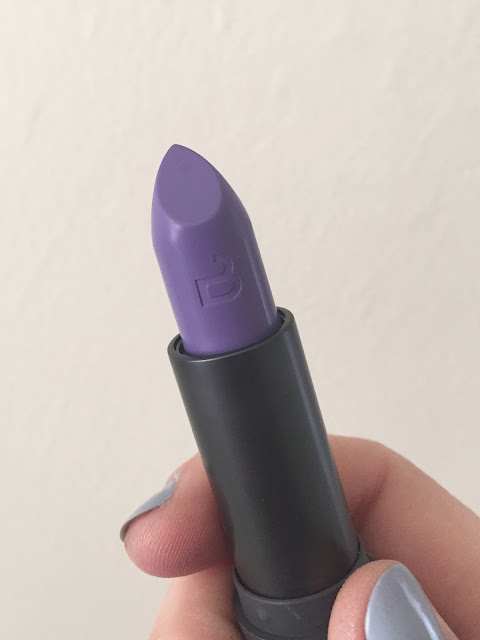 Bite's "Sweet and Savory" collection for Summer 2016 comprises three dark "savory" shades (Kale, a blackened green; Squid Ink, a navy blue; and Whiskey, a deep brown similar to MAC Antique Velvet) and three purply "sweet" shades (Taro, a dark grayish purple; Thistle, a lilac-taupe in the ColourPop Trap family; and Lavender Jam, an "electric blue-violet"). So far as I know, all of them are permanent except the two purples, Taro and Lavender Jam. People have been complaining that these shades are better suited to fall than to late spring, but the cool, cloudy spring we've been having on the East Coast has altered my expectations of spring and summer colors. I've barely touched my corals and pinks in the past month, reaching instead for deep berries like MAC Eugenie and moody purples like MAC Up the Amp. (For that matter, seasonal color analysis dictates that "summer" colors are cool and muted, which means that people with summer coloring would be best suited to the three "sweet" shades.) The six Bite colors spoke to the gloomy gothy witchy spring/summer vibes I've been feeling this year, and Lavender Jam spoke loudest of all. Here's the thing about Bite, though: it's one of those brands that I feel I should like more than I actually do. On paper, Bite is ideally suited to my tastes. A cruelty-free brand that makes nothing but lip products, uses food-grade ingredients, and gets rave reviews from most bloggers—what's not to like, right? But I hesitated for nearly a week before ordering Lavender Jam, because no Bite product I'd tried so far had really impressed me. All of them, no matter how opaque, had distinguished themselves by their infuriating slipperiness. The "matte" purple lipstick I bought at the Bite Lip Lab in NYC came out shinier than most of my cream-finish lipsticks, with a distressing tendency to settle into my lip lines after 30 minutes of wear. The few Luminous Creme lipsticks I tried in Sephora ranged from semi-sheer to opaque, but with so much slip that I never seriously considered buying one. My deluxe sample of the new Amuse Bouche in Radish was richly pigmented, but it never set on my lips, and every sip from a coffee cup left a vibrant lipstick stain.

So I was understandably skeptical of Lavender Jam, but that color. I couldn't stop thinking about it. It's the sort of color that can look unnatural on a human face but is found abundantly in nature, especially at this time of year: morning glories, irises, hydrangeas, and pansies come to mind. Here are some flower photos I've taken around town in the past year—clearly, I'm drawn to this particular shade of luminous blue-purple: 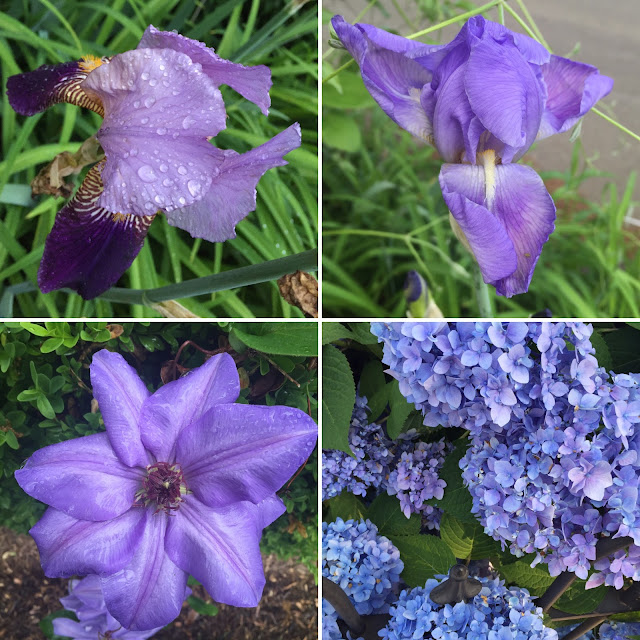 So pretty, right? I'm sad to be missing hydrangea season on the East Coast this year. Ironically, I think of lavender flowers as pinker than Lavender Jam. 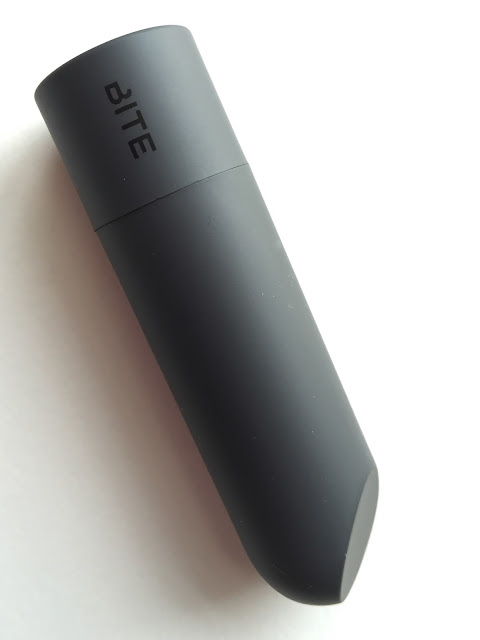 I was gratified to find that Lavender Jam was indeed different from my other purple lipsticks. In blueness it's about equal to NYX Liquid Suede in Amethyst, but Amethyst is of course much darker: indigo to Lavender Jam's periwinkle.


Lavender Jam looks semi-matte in this photo, but make no mistake, it's a cream formula with a noticeable shine. It's not quite opaque in one coat; the lip swatch below is two:

I'll end the suspense now: Lavender Jam is as slippery as all the other Bite lipsticks I've tried. Damn it. It transfers onto absolutely everything. (I was trying on dresses yesterday and was terrified that I'd find smears of purple on them when I was done.) And because Lavender Jam is lighter than my two other Bite shades, I have to reapply it every time it transfers. I have to reapply it after sipping once from a cup. This would be egregious in a drugstore lipstick, but it's beyond egregious in a $26 lipstick. I even tried applying it over my neglected ColourPop lip primer, but that did nothing for the longevity (granted, that might say more about the lip primer than about Lavender Jam). The best method I've found is the one I use with other slippery and/or streaky lipsticks: putting some product on my finger and working it into my lips as a stain, then applying a second coat straight from the tube. I applied Lavender Jam that way almost three hours ago and have drunk half a bottle of water since then, and the color has worn away from the center of my lower lip but looks decent otherwise. Still, this slipperiness is ridiculous, and I know it's going to annoy the shit out of me if I keep Lavender Jam. I need my lipsticks to have my back. I need to trust them not to fade or feather on me if I dare to talk, sip water, or breathe. And I don't trust Lavender Jam.

If it were a less hard-to-find color, or if the formula had any other flaws, I'd return it to Sephora without a second thought. But I love the color. And the formula hydrates my dry lips, which is rare. I even like the citrus scent of the Amuse Bouches. So...yeah, I'm not sure what to do. I feel like I've hit a streak of bad luck these past few months: I've had to return about half the makeup I've bought. Which makes me feel wasteful (returned products just get thrown away) and question my instincts. Have I become pickier about the products I let into my collection, or have I just stopped being able to tell good ones from bad at a glance? I'm leaning toward keeping Lavender Jam, but maybe that's a terrible idea. Ugh.

Anyway, here are some photos of Lavender Jam on my face! Yesterday I got more experimental with makeup than I'd been in a while. I decided to copy this eye from Jill Stuart Spring 2016, but in lavender instead of pink: 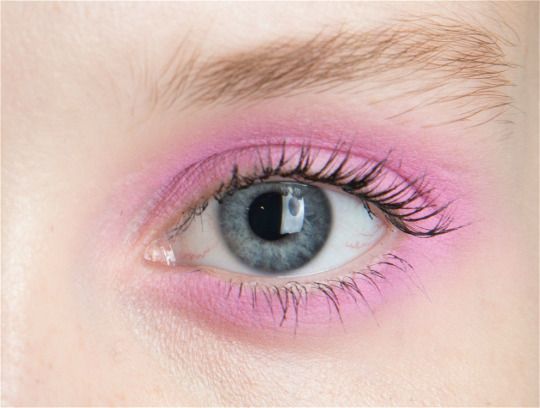 For my lavender version, I knew I wanted to use Kiko 251, a blue-toned lavender with some shimmer. But since 251 is a bit sheer, applying it over primer didn't give me the pastel pop I wanted. So I washed it off and tried again, this time putting down a layer of ColourPop Cowboy, a near-white matte lavender, over the primer. Cowboy is not opaque either, but it made the perfect base for 251. I was so pleased with how my eyes turned out—the look gave me Pris-from-Blade-Runner vibes: 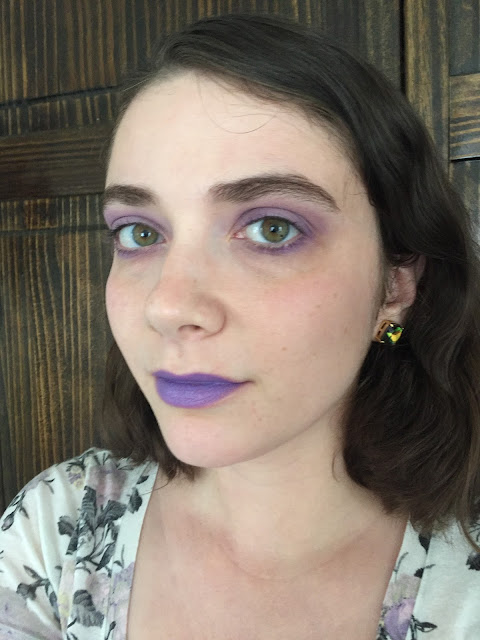 And here are the products I used: 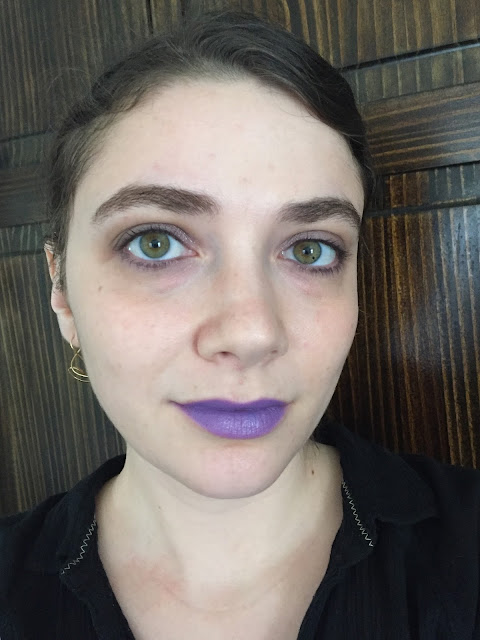 Overall, my impression of Bite remains the same as it was before I tried Lavender Jam: a nice brand in theory, but not for me. I've given it plenty of chances, but nothing from the brand has blown me away. Have you had a better Bite experience than I have? Am I insane to consider keeping Lavender Jam? Let me know! And many thanks to everyone who left such kind comments on my last post—your support means a lot. <3
Posted by auxiliary beauty at 1:04 PM