I'm told that it's May, though you wouldn't know it from the weather, which has been utterly miserable for over a week and promises to carry on being utterly miserable for another week to come. Every day is the same: between 45 and 60 degrees, completely overcast, raining on and off, humidity around 90%. After one glorious week in mid-April, I thought I could settle into the certainty of not having to wear pants again until my UK visit in June. Then nature said "lol j/k" and I found myself fumbling in my closet for my down coat and pulling MAC Eugenie out of retirement. (I really have been loving Eugenie recently, as a complement to my leather jacket and end-of-semester scowl.) But the calendar proceeds apace even if the weather doesn't, and it's time again for my monthly roundup of beauty purchases! 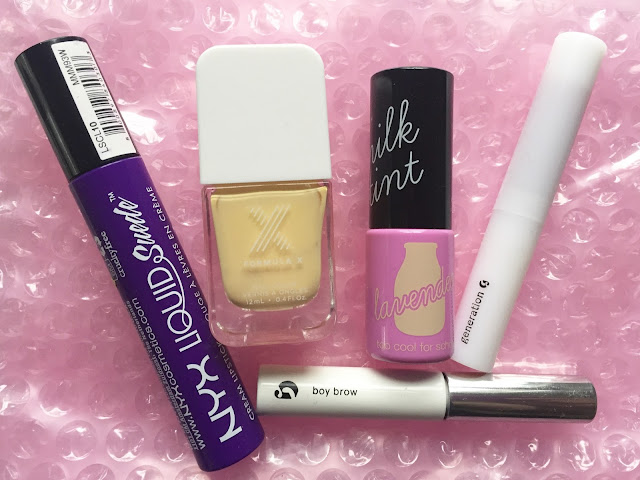 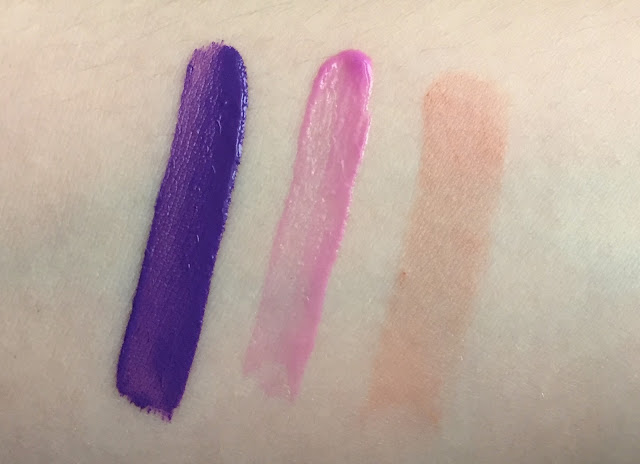 All right, so I bought one more lip product after declaring a lip-product no-buy for the rest of April. And it was another purple liquid lip product. But I didn't exceed my budget or my item limit, and I love everything I bought, so no real harm done. As for Cake, I thought I'd find such a warm beige challenging to wear, but the color became less daunting when I started thinking of it as a muted peach instead of a would-be nude. Reviews of Milky Lavender and Cake to come soon! 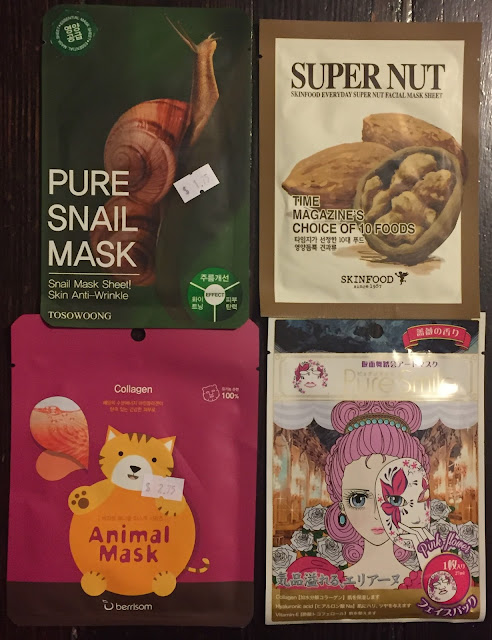 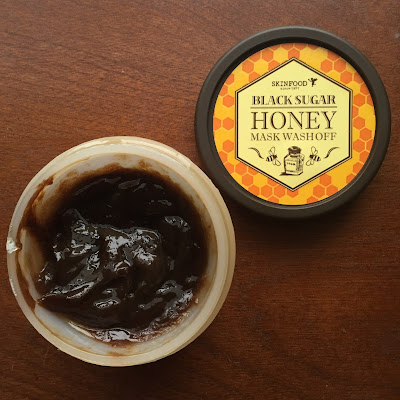 I've used the Black Sugar Honey mask three times now, and I like the exfoliation it provides, though it does get very messy. The Tosowoong mask made my skin soft and matte, but I wasn't totally comfortable in the the knowledge that there was snail mucus on my face, and I'd rather not have snails die for my beauty regimen.

Replacements (no photo because these products are boring):

Overview: For the second month in a row, I stayed well under my makeup/polish budget of $40. I'm proud of myself for that, especially because April was a rough month emotionally. The less I buy, the less I want to buy, and I'm increasingly aware of what a commitment each new lipstick or nail polish is. I also successfully resisted two tempting sales: Urban Decay slashed the price of its soon-to-be-discontinued Revolution Lipsticks from $22 to $11, and ColourPop had a sitewide 20%-off sale a few days ago. Urban Decay Rapture and Streak are two of my favorite lipsticks, but I have a strict no-backups policy these days: I know that if I ever manage to finish a lipstick, the last thing I'll want to do is buy exactly the same one (unless it's NARS Dolce Vita). Plus, the new colors I was considering were all bold, and the bold shades of the Revolution lipsticks are almost impossible to apply without a lip brush. As for ColourPop, there were only a few things I wanted, and saving $5 wasn't worth dealing with a crashing website, an hours-long online queue, and the near-certainty that I'd have to wait ages for my items to ship. Frankly, I sympathized with this person on Instagram:


But I shouldn't feel too smug about avoiding those sales: my overall beauty spending was up about $25 from March, and $25 was exactly the amount I spent on new skincare at oo35mm in New York. I don't feel too bad about stocking up on masks: I almost never go to Chinatown (oo35mm is right off Canal Street, a crowded, noisy nightmare), so I probably won't be back to the store anytime soon. Still, I think I should keep an eye on my spending habits lest skincare replace makeup as my priciest vice. 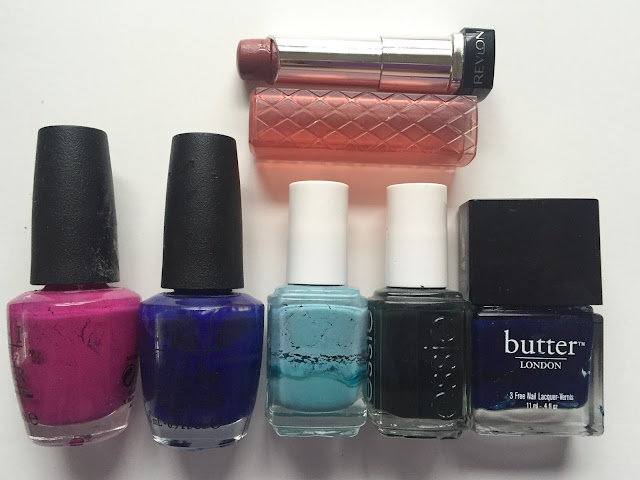 My experience with Pink Truffle mirrors my changing standards for lipstick in general. This is actually my second tube (I bought my first around 2012), and I started feeling dissatisfied about halfway through it. Despite its creamy formula, Pink Truffle is quite drying, and something about the color doesn't sit well with my complexion. It's too warm and brown to be a true MLBB for me, but it's too pink to be a statement brown like Topshop Motel. I've been lowkey trying to pan Pink Truffle for a few months (wearing it to yoga, etc.), but it's no longer giving me any pleasure, so I think it's time to say goodbye. At least I can feel good that I have more exacting standards for color and formula than I did in 2012, or even in 2014 when I repurchased Pink Truffle.

I hate to get rid of the nail polishes, all of which were favorites of mine, but four of them are almost completely dried up. The fifth, Essie Stylenomics, stained the hell out of my nails last fall, and it took months for them to recover completely. I just can't see myself wearing Stylenomics again, as much as I love that severe dark green. Royal Navy was my first Butter London, by the way—I bought it in June 2012.

ColourPop Ultra Matte Lip in Mars ($6): It's still on my wishlist after a month, which means I'm allowed to get it.

ColourPop Ultra Satin Lips in Marshmallow and The Rabbit ($6 each): Of course, the problem with ColourPop is that you can never order just one thing. I'm curious about ColourPop's Ultra Satin formula, and two shades in particular are calling my name: Marshmallow, a grayish lavender, and The Rabbit, a rich fuchsia with a blue sheen. The thing is, I don't need them. I really don't. Every time I start to fantasize about wearing these colors, I hear Kimberly Clark's voice saying, "Don't need it, not gonna buy it." I might buy them anyway, but not after some thought. By the way, if you're not familiar with Kimberly Clark's "anti-haul" videos, you're missing out.

(Update, 5/4: There have been reports of a security breach on the ColourPop website. I'm definitely not purchasing from them until this gets cleared up.) 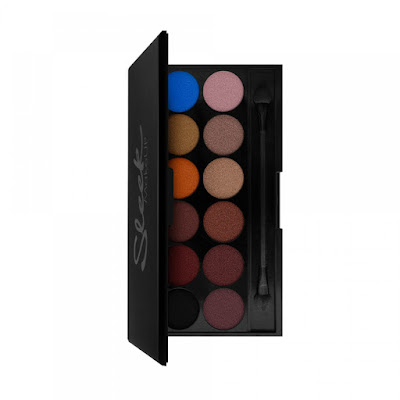 I'll probably hold off on this until my trip to the UK next month, but I might as well mention it now. I'd like to have some more pinkish and warm-toned shades in my eyeshadow collection, and Sleek's i-Divine palettes receive almost universally positive reviews. That website photo is inaccurate, by the way: the reviews I've read indicate that the colors are much brighter IRL (what looks like ochre above is actually lemon yellow, for instance). I doubt I'll end up using every shade, but the reds and pinks are so pretty, ugh.

Finally: can we talk about the fact that Urban Decay is releasing 120 new lipsticks on June 5? It's a bold move, but my first reaction was annoyance, not excitement. The new Vice lipsticks will be $17 instead of $22, which means that quality has been cut somewhere (certainly in packaging, but I hope not in formula as well). More importantly, a lineup of 120 is overwhelming, and not in a good way (that said: OMG SO MANY PURPLES). I had enough trouble choosing Angela from 40 NARS Audacious lipsticks; now Urban Decay is presenting us with three times that number! Picking a couple of favorites will require a lot of research, and I just don't want to let Urban Decay take up that much space in my brain. Not yet, at least. Get back to me on June 4.
Posted by auxiliary beauty at 11:55 PM