I didn't learn to swim until my first year of college and still can't traverse more than two lengths of a pool without having to rest. Strictly speaking, I'm the last person who should be laying claim to sea witchery of any kind. But that's the great thing about makeup: it allows us to put on and take off as many characters as we wish. And come to think of it, do sea witches even do much swimming? I tend to picture them sitting in murky grottoes surrounded by their eel and seahorse familiars, not doing the backstroke from point A to point B. In any case, I wish I could give you a photo of NYX Liquid Suede in Stone Fox amid drifting seaweed, but the best backdrop I can muster is an old volume of Bakhtin: 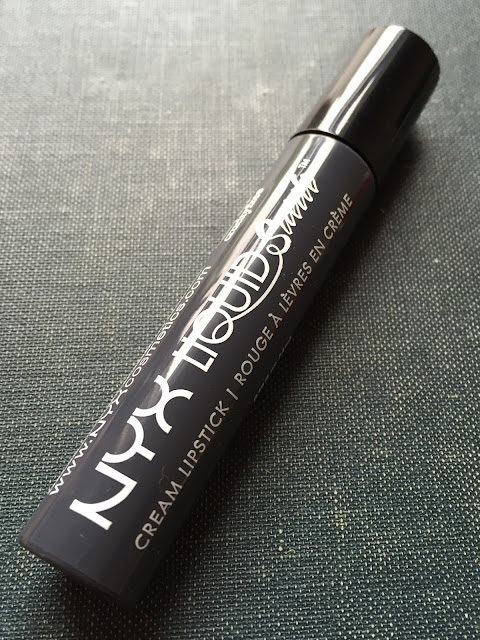 I mentioned in my review of Amethyst (which I'm wearing as I type this) that the NYX Liquid Suede range is oddly limited: there are some very bold colors and some very drab ones, and little in between. So despite my love for the formula, I wasn't tempted to add to my Liquid Suede collection until last week, when a sale on NYX combined with a $3 coupon meant that I could score one for about $2.50. Now, any regular reader of Makeup Rehab will tell you that allowing a sale to influence your spending is a rookie mistake. No matter how deep the discount, you're still spending more than $0 and committing to yet another lipstick that you probably won't finish before it expires. I knew all this, but like...whatever.

The two Liquid Suedes that most appealed to me were Stone Fox, a dark teal-gray, and Soft Spoken, a trendy pinkish brown reputed to be a dupe for Kat Von D Lolita (though I couldn't tell you which of the 57 batches of Lolita it's supposed to dupe). I initially bought Soft Spoken, thinking I'd get a lot more wear from it than I would from Stone Fox, but trying it on made me realize that it was meant for warmer complexions than mine: 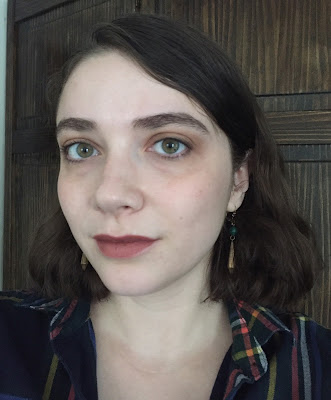 The lighting isn't great here, but you can see that Soft Spoken pulls very brown and drab on me, tamping down my coloring and making me look even paler than usual. Looking at this photo, I'm reminded of Kate's recent post on "work-appropriate" makeup. She argues that the "natural" colors generally recommended for the office look best on warm, muted complexions, while people with high-contrast coloring look "washed out and weakened" in the same colors—hardly the impression anyone wants to give in an interview or presentation. As someone with similar coloring to Kate's, I agree completely with her suggestion that "there's a difference between what's sold as natural [nude lips, soft, neutral eyeshadows, etc.] and what appears natural on an individual." I'm done trying to find my perfect pink-brown lip color, because I don't think it exists. Wearing a lipstick like Soft Spoken, I look soft-spoken, as if I want to fade into the background of whatever room I'm in. Screw that.

Before returning Soft Spoken, though, I made a few comparison swatches out of curiosity. L-R: Revlon Matte Balms in Fierce and Sultry; Soft Spoken; Topshop Lip Bullet in Motel. It's odd that Soft Spoken looks so dark here, because it seemed much lighter on my lips. 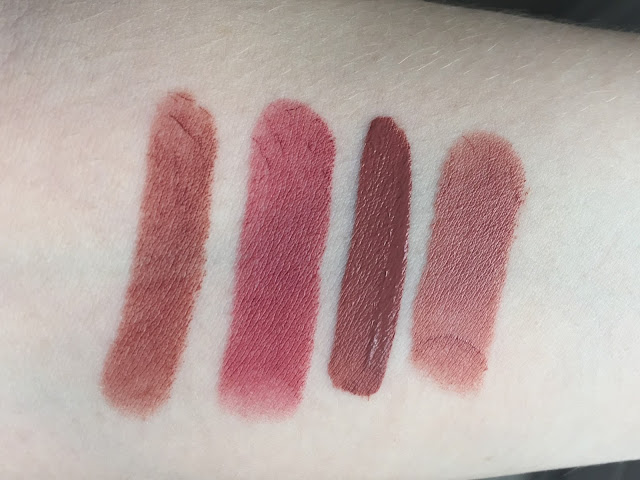 Back went Soft Spoken to CVS, and I picked up Stone Fox instead. It was a momentous purchase: the first lipstick in my collection that contained no red whatsoever. Even my most daring shades—Amethyst, & Other Stories Droguet Purple, MAC Antique Velvet—have a bit of red, which makes them distant cousins to my natural lip shade. Stone Fox, though, is a dark gray with hints of both blue and green, a far cry from anything else I own. Here it is swatched next to Amethyst: 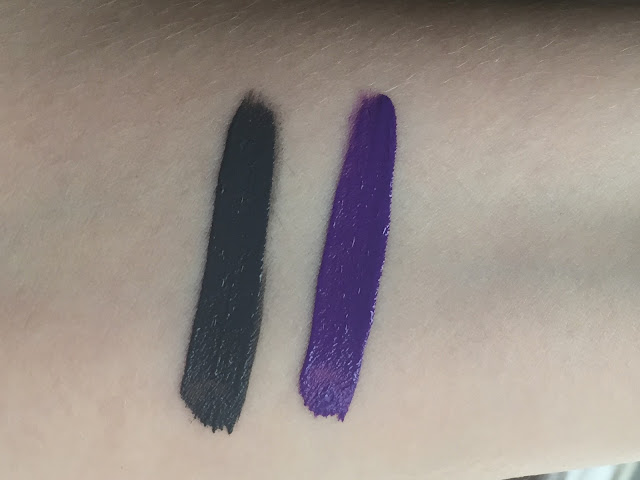 They look identical in opacity here, but Stone Fox's formula is superior to Amethyst's. I have to fiddle with Amethyst to get it perfect: work the first coat into my lips as a stain, add a second coat, wait for that to set, then touch up any bald patches. Stone Fox is opaque straight from the tube. Pigmentation aside, Stone Fox performs similarly to Amethyst: it takes about a minute to set, after which it feels soft and a bit tacky, but not sticky. It doesn't transfer much, it's non-drying, and it stays more or less pristine until I eat. Can't ask for much more than that. Unfortunately, the doefoot applicator isn't the best for achieving a clean outline, as my lip swatch of Stone Fox makes very clear. It's a learning curve!

And just for fun, here's OCC Stained Gloss in Dune over Stone Fox: 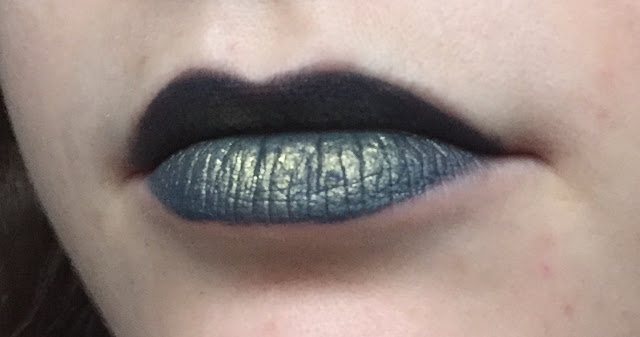 In these photos, Stone Fox seems to pull blue (which it does on most people, I think), but in the context of my face, it looks decidedly greener, verging on a grayish teal. Here it is with no other makeup except concealer: 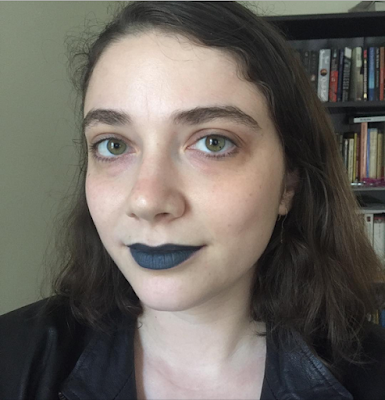 At the risk of sounding completely insane, I'm tempted to say that Stone Fox looks more natural on me than Soft Spoken. It harmonizes with my complexion and eyes, and it provides the same level of contrast that my hair and eyebrows do. It also feels appropriate for the unseasonably gloomy weather we've been having.

Full disclosure, though: I have yet to wear Stone Fox out of the house. I can't help but be influenced by my surroundings, and I live in a stuffy suburb that's far less quirky than most university towns. This doesn't mean that I wear pearls and yoga pants every day (or at all), but it does mean that I'd feel self-conscious wearing Stone Fox on my daily perambulations. 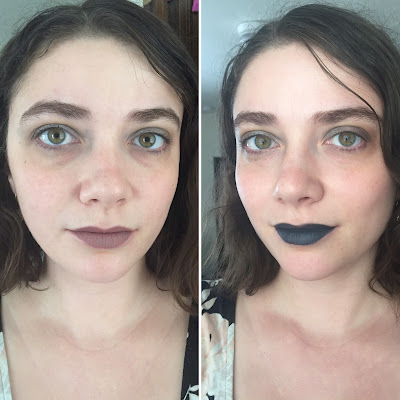 To the left is the makeup I wore yesterday to the library: NARS Habanera eyeshadow duo (the mint green always makes me think of the ocean), Illamasqua Zygomatic blush, ColourPop Lunch Money highlighter, and ColourPop Ultra Matte Lip in Trap. To the right is the same makeup with Stone Fox in place of Trap. The makeup on the left is already bolder than 95% of the makeup I see on a daily basis, but for some reason I can't take that final step and wear Stone Fox to a place where there's any chance of seeing my students. Maybe I'll just wait until I visit the UK next month: I feel much less awkward wearing eccentric lip colors there.

By the way, I discovered while writing this post that NYX just released a dozen more Liquid Suede shades! I knew it was only a matter of time before they expanded the line a bit. Here's the entire lineup, and here are some swatches of the 12 new ones. Lots of purples and blues, if you're into that sort of thing. Truly weird lip colors—blues, greens, grays—are trickling into the mainstream this year (see also Bite's new shades for summer), and I couldn't be happier. Sea-witch vibes for all!
Posted by auxiliary beauty at 6:09 PM