Too Cool for School Milk Tint in Milky Lavender

This is, what, the third purple lip color I've reviewed in the last month? Oh, well.

I don't think it's possible to be a lipstick-loving k-pop fan without developing a curiosity about Korean lip tints. I'd had my eye out for a tint since last year, but most of the tints available in the US seemed to come in very bright colors (orange and pink being the most popular) and watery, ultra-staining formulas that I knew would dry the hell out of my lips. By the time I visited oo35mm, a deceptively tiny store in New York's Chinatown with an impressive selection of Asian (mostly Korean and Japanese) beauty products, I'd pretty much given up on finding a relatively non-drying lip tint in my preferred purply color family. I was actually at oo35mm for skincare: I wanted a Salux exfoliating body washcloth, which I'd read about in this Into the Gloss post (see, I do like ITG sometimes), as well as some sheet masks from brands I hadn't yet tried. But when I saw the Too Cool for School display, with its array of pastel lip tints in cardboard milk cartons holy shit, it was all over for me. 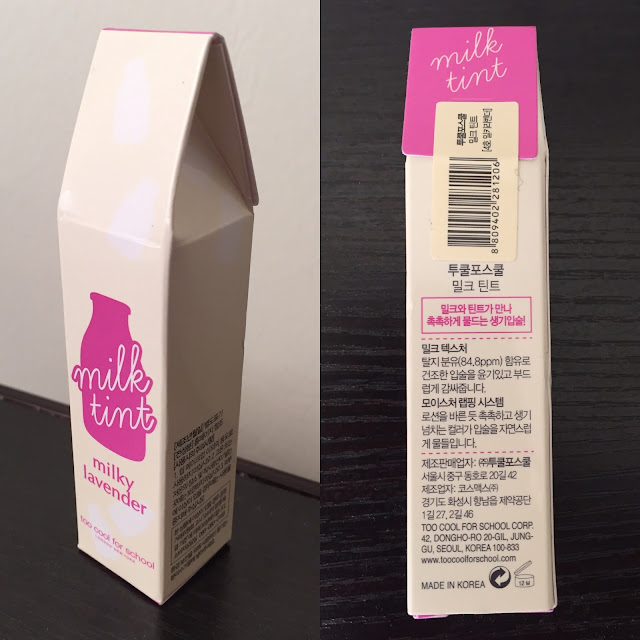 Too Cool for School's Milk Tints come in four colors—Milky Lavender, Milky Orange, Milky Pink, and Milky Red—and retail for $7.99, at least at oo35mm. While in the store, I swatched Milky Lavender (second from right below) next to some other, more conventional lip tints. The two on the left are from Peripera, the one between those two and Milky Lavender is probably Milky Orange, and I think the one on the far right is also Peripera: 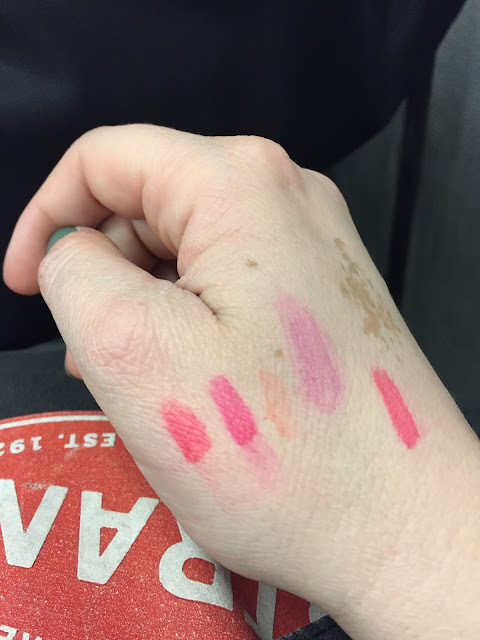 Here they are perhaps an hour after I made the swatches. As you can see, Milky Lavender and Milky Orange (?) are much less pigmented than the others, but my skin also looks less dry beneath them. The Peripera tints are very bold, but they're really highlighting the texture of my skin. That seems to be the inevitable tradeoff with lip tints.

I won't lie, I bought Milky Lavender mainly for the packaging. Not only does the cardboard box look like a milk carton, but the tint itself has a milk bottle on it: 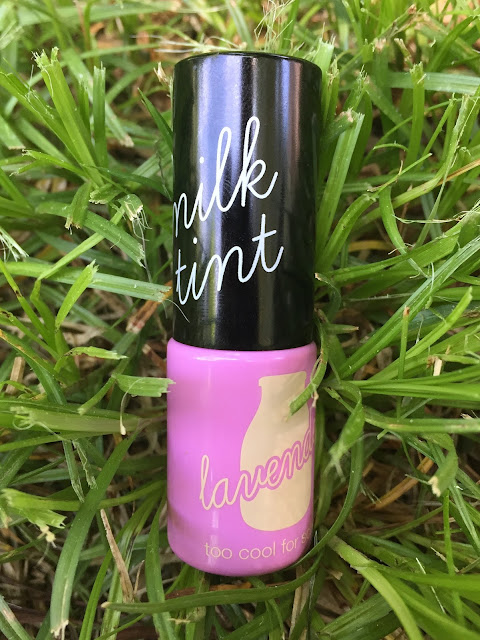 I love how sturdy the bottle is: it's made of very thick plastic, and the top screws on securely. The applicator is a stubby little doefoot:


This won't make me sound like a very responsible consumer, but I'll say it anyway: I was so delighted with the packaging that I wouldn't have minded much if the lip tint itself had turned out to be mediocre. As it happens, though, I'm very pleased with Milky Lavender. It's a light pinky purple in the radiant-orchid family, and I don't know about you, but I'm not over Pantone's 2014 color yet. Witness the deck chairs on which I'm typing this very post: 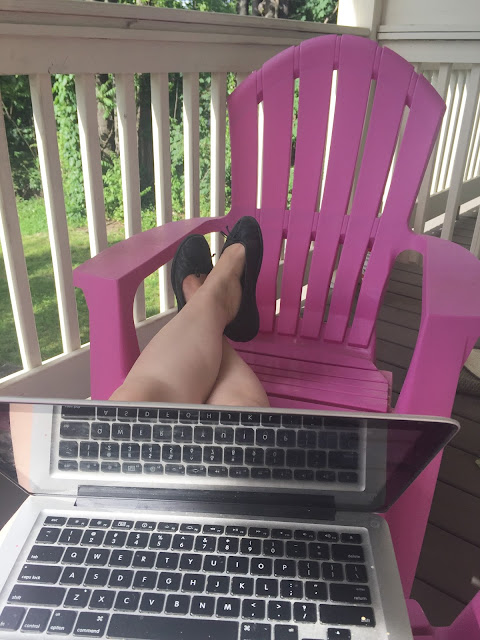 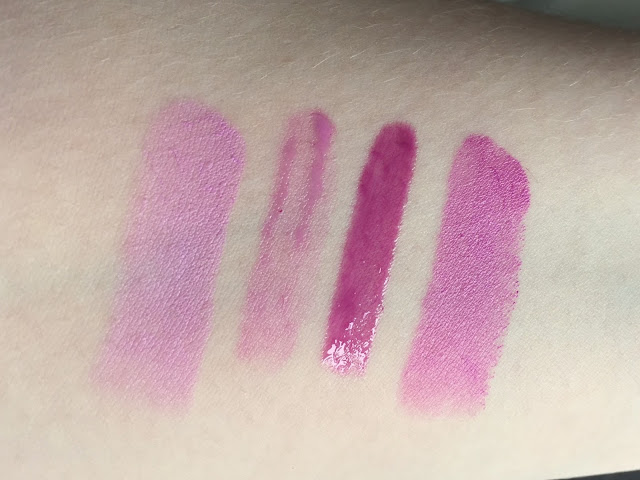 Milky Lavender goes on quite sheer, but you can see it darken before your eyes, like watching a Polaroid develop. After one coat, it's a light purply pink that blends well with my natural coolish-toned lip color; after three coats (as I prefer to wear it), it's a medium pinky lilac. Like the Glossier Generation G lipsticks I reviewed in March and April, Milky Lavender is never going to be opaque, and the texture of your lips will show through no matter how much product you pile on. That's just in the nature of lip tints. Milky Lavender is unusual in one respect, though: it has a slight sheen when first applied, though that disappears within an hour or so, fading to the standard matte lip-tint finish. The tint has a subtle, sweet floral scent that reminds me of jasmine tea; I find it very pleasant, but if you don't like scented lip products, this might be one to avoid.

Here are my bare lips for comparison—it's a rare day when my lips aren't peeling, flaking, or bleeding, so I'm glad I seized the opportunity to get a photo back on May 1: 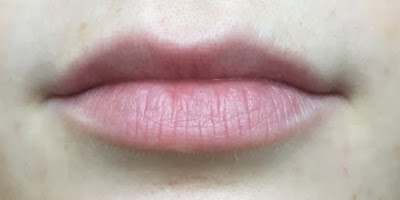 And here we have one, two, and three coats of Milky Lavender, all freshly applied: 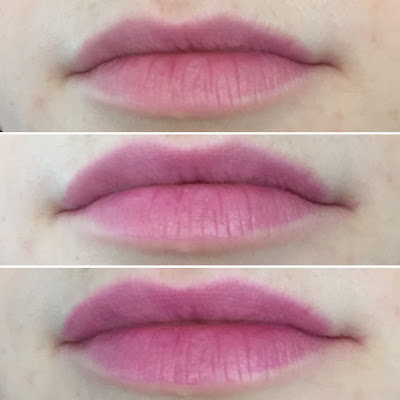 Milky Lavender hangs on for a long time, through eating, drinking, and even a strenuous (read: extremely sweaty) hourlong workout. It does fade first from the center of my lips, so I find myself reapplying it to that area every few hours. As it fades, it becomes brighter and pinker (something I've observed with my Revlon Balm Stain in Crush as well). I don't find Milky Lavender particularly drying—no more so, at least, than any other staining or matte product. It's easy to apply lip balm over the color, as well.

Here it is on my face—I generally pair it with boring understated makeup for my low-maintenance days. The sheen has faded a bit here: 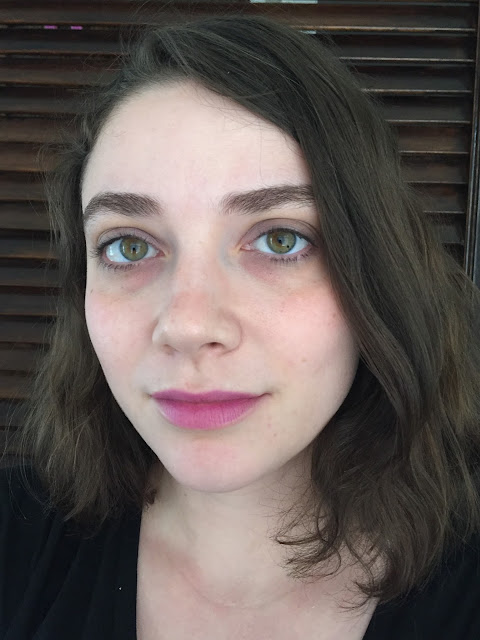 Here I've done a blue-gray eye with, if you can believe it, four different shadows: Urban Decay Skimp (light beige) all over the lid and Frisk (light taupe) in the crease; a deep grayish teal from my theBalm custom palette layered over Skimp; and...uh, I forget what I used for liner, sorry. It's funny, I was thinking of Milky Lavender as a soft foil for a bolder eye look, but the combination of blue shadow and lavender lips came out looking distressingly '80s. Pardon the wet hair. 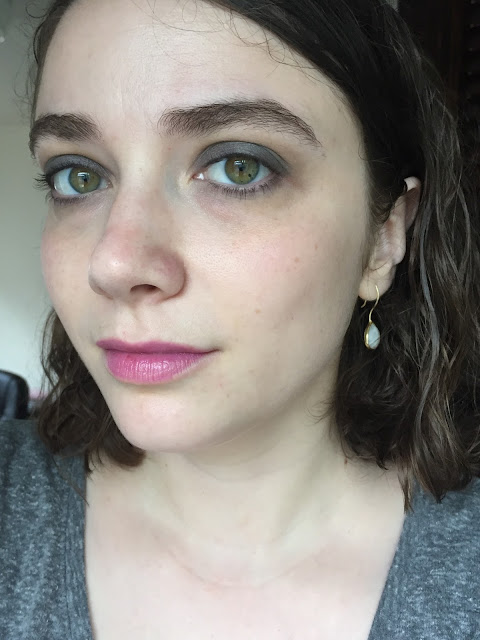 And a closeup of the eyes:

Though I usually stick to my reliable neutral eyeshadows, I've been trying to experiment more with color and blending and layering. I don't have a huge eyeshadow collection, but it's large enough that I know I can do a lot more than I'm currently doing!

By the way, I'm leaving for the UK in two days, and it seems unlikely that I'll get around to reviewing my nude glosses or pink lip samples before then. Oh well, two out of four isn't bad (I mean, it's an F, but whatever). Let me know if anything exciting has come out in the world of British/European beauty since I visited last year!

Posted by auxiliary beauty at 5:27 PM