A lot has happened since I last posted. I'm still stunned and depressed at Britain's decision to leave the European Union. It was surreal to watch the whole thing unfold around me, and painful to have no way of affecting the outcome. It's not my nation or my fight, but I'm still heartbroken at what this means for Britain and Europe in general. It's clear by now that we live in an age of paranoid nationalism, and if you can think of anything good that paranoid nationalism has ever produced, do let me know. I'll just be over here reading Hobbes and glancing obsessively at the BBC.

You know what? Let's talk about makeup.

I've been in London for the past week, and have found myself wearing less makeup than usual. My boyfriend's parents and sister are visiting, and they're no-makeup WASP types who can go from pajamas to out the door in ten minutes. Since they've been generous enough to let me travel with them for nine days, I've done my best to adapt my morning routine to theirs, which has meant stripping down my makeup significantly. For the past few days, my daytime look has comprised Glossier Boy Brow, mascara, undereye concealer, two swipes of Illamasqua Zygomatic blush on each cheek, and a lip color. I can slap all that on in under five minutes, and it's been refreshing to take a break from more involved looks. Here's the combination yesterday, featuring NARS Velvet Matte Lip Pencil in Mysterious Red (not the ideal lip color to wear to Borough Market, where I consumed black-truffle tortelloni, Pimm's, and a raspberry-cream donut in quick succession): 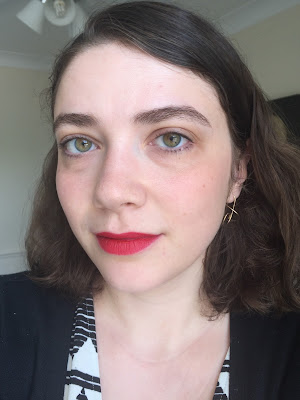 No, my eyes aren't as defined as I'd prefer, but I'd rather have ten extra minutes to wander the streets of London than spend those ten minutes blending out eyeshadow. That said, I haven't neglected makeup in my peregrinations, though I've bought only one item in London (Topshop's duochrome eyeshadow in Holograph). Last weekend we went to Harrods, where a quotation from Shelley's "Ozymandias" frames the entrance to the womenswear section, and if that's not ironic I don't know what is: 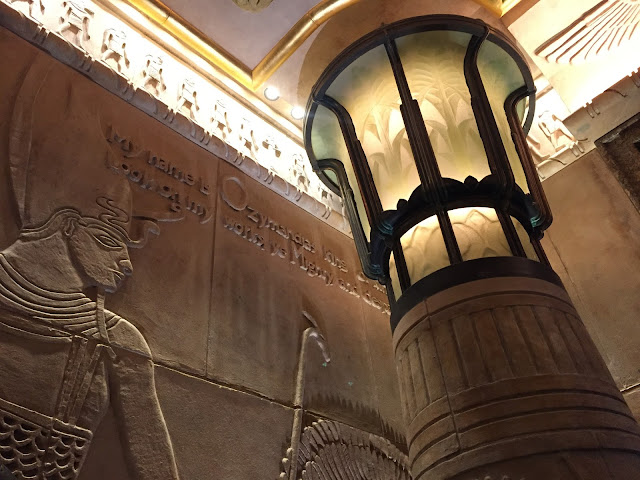 Here's the perfume hall on the ground floor (not to be confused with the sixth-floor Salon de Parfums, which we didn't get a chance to visit): 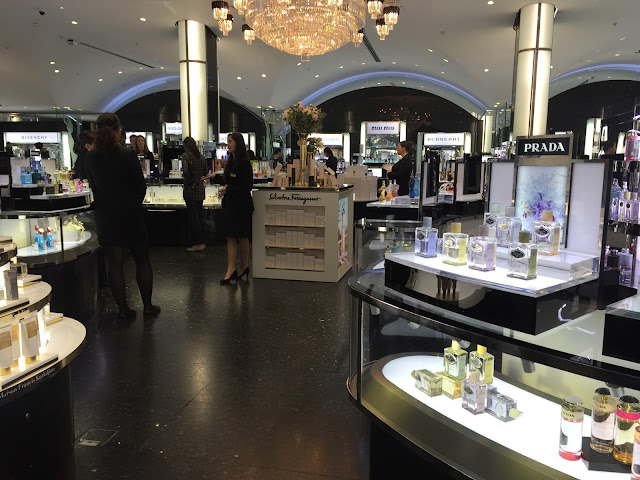 Fornasetti candles, which I can't afford but wish I could: 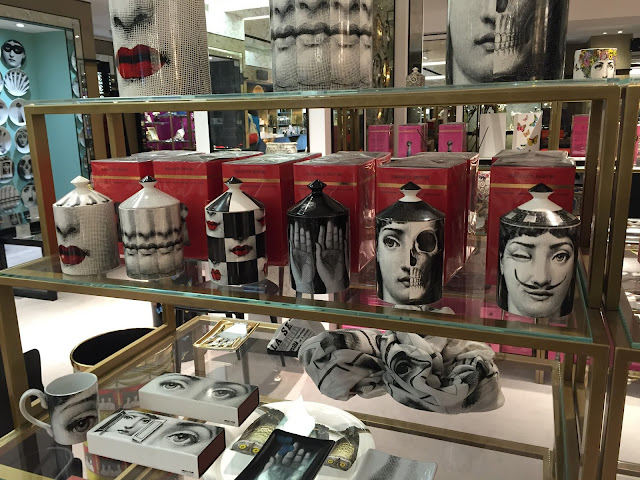 Harrods has two cosmetics sections on the ground floor: one with mid-range brands like MAC and Shu Uemura, and another with high-end names like Chantecaille, La Mer, and Suqqu. Here's the daunting Christian Louboutin display in the latter section: 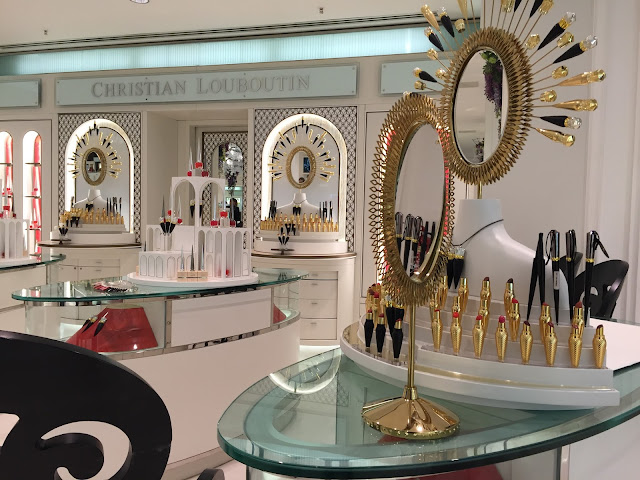 I'll just say it: I would never pay $90 for a lipstick. Having tried quite a few brands over the years, I do think you get what you pay for with lipstick, but only up to a certain price point—and in my experience, that price point is between $20 and $25. A NARS or Urban Decay lipstick is probably, but not definitely, going to have a higher-quality formula than a Wet n Wild or Revlon lipstick. But beyond the mid-range price point, you're paying for brand name, pretty packaging, and an overall aura of luxury. To be clear, I don't think there's anything wrong with paying for those things, if you can afford to do so. The entire makeup industry is based on illusion: a Rouge Louboutin might not be "worth" $90, but I don't think a NARS Audacious lipstick is "worth" $32, either, or a MAC lipstick "worth" $17. I'd wager that almost all makeup is vastly overpriced if you take into account how much it costs to produce. That said, a $90 price tag for a lipstick pisses me off. It's insulting. And I don't want my lipstick to resemble a heavy gold sex toy, you know? It's just not practical.

Out of curiosity, though, I did swatch a few shades. And they were nice! But not $90 worth of nice (though I don't know what "$90 worth of nice" would look like, tbh). Top to bottom: Survivita, Zoulou, no idea, Private Number (?), Loubeach, Miss Loubi, Pluminette (?). Apologies for weird indoor lighting and faulty memory. 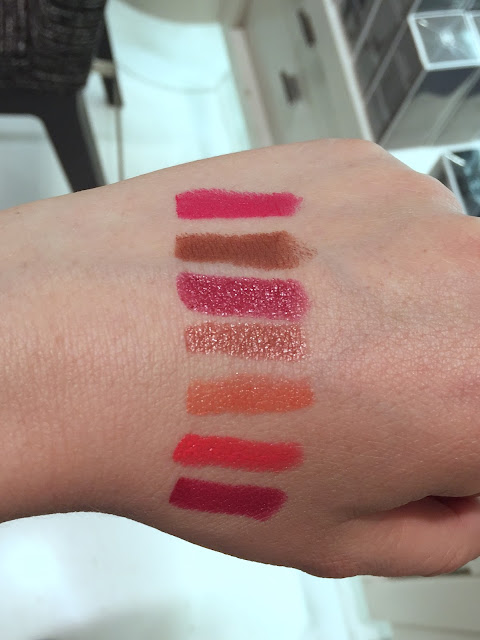 Harrods has the only Marc Jacobs Beauty counter I've seen in the UK so far, so I couldn't resist swatching a few Le Marc Lip Cremes I hadn't examined before. L-R: Je t'aime, Rei of Light, Blow, Editrix, Willful: 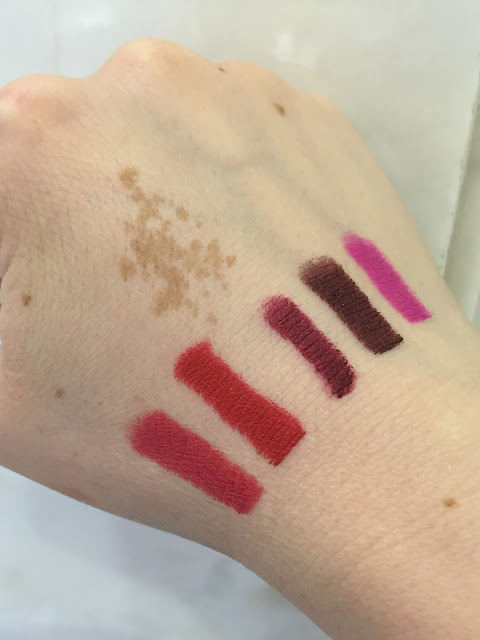 Editrix and Willful are new for summer 2016; Editrix looks like MAC Antique Velvet and Willful like NARS Angela. Incidentally, I wore Angela today and was reminded of how incompatible I am with the NARS Audacious formula. It's drying, it stains my lips so badly that I have to scrub them with a washcloth, and it somehow manages to creep outside my liplines. If I get around to selling any of my makeup this summer, Angela might have to go, much as I love the color.

On Monday I had a very different beauty experience at the British Museum, where I spent a lot of time in the galleries devoted to Roman Britain. Rome governed Britain from 43 to 410 CE, leaving behind walls and roads that still survive today, as well as countless artifacts of daily life. I was particularly fascinated by these "cosmetic grinders": 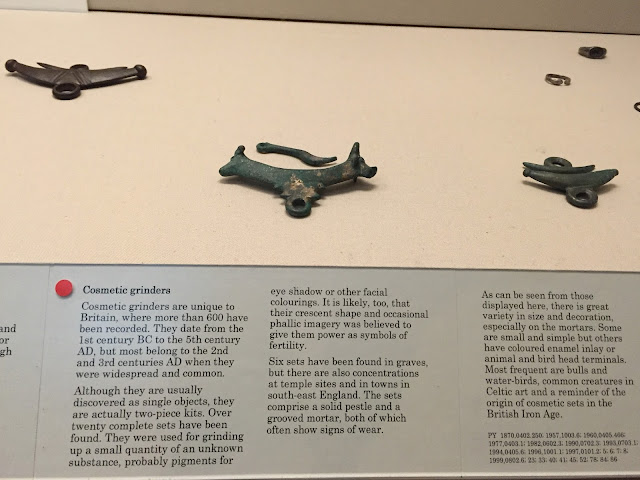 So many! I wish the museum had given us a diagram of how they actually worked. I guess the pigments were ground between the two pieces? 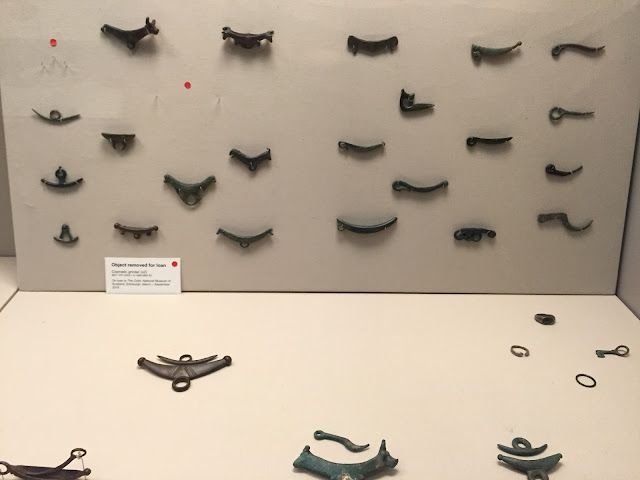 Not makeup, but check out this badass gold body chain found in Hoxne, Suffolk. The two chains are joined in the back by a coin from the reign of Gratian (367-383): 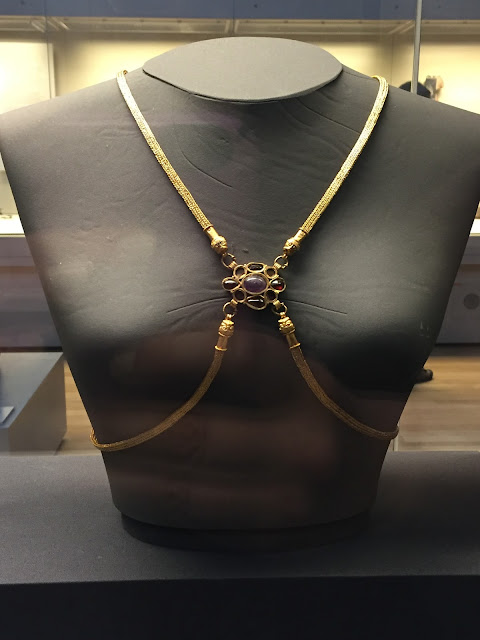 On Wednesday we did some shopping in the Regent Street area, and I swatched four Surratt lip colors at Liberty. L-R: Automatique Lip Crayons in Séductrice, Mahogany, and P.O.C.; Lipslique in Lady Bug. Pretty colors, but I didn't see anything truly original. I think I've come down with lipstick ennui... 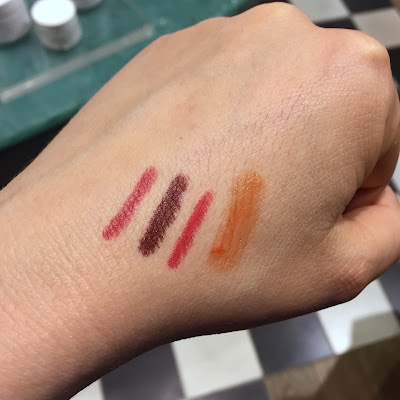 ...which explains why I didn't bother swatching lipsticks in the giant Oxford Circus Topshop! L-R: Mono Eyeshadow in Holograph; Glow Highlighters in Polish and Gleam; Glow Stick in Heat. 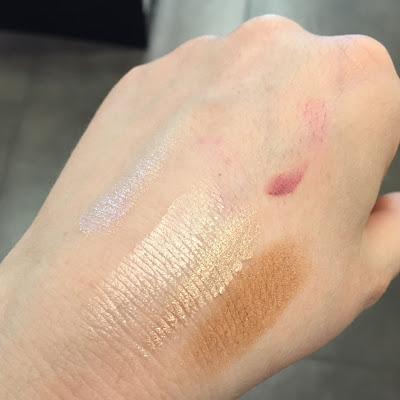 The Glow Highlighters are dense, pigmented cream highlighters in glass pots. The texture is thick and gooey, and a little goes an extremely long way. I was briefly tempted by Gleam, the dark gold, but it looked straight-up yellow on my face. Polish is a bit pinker than it looks here, and the Glow Stick is a bronzer with large sparkles. The Mono Eyeshadows are sparkly duochromes, some more opaque than others. I also swatched Spaceport (below), but it was very sheer. 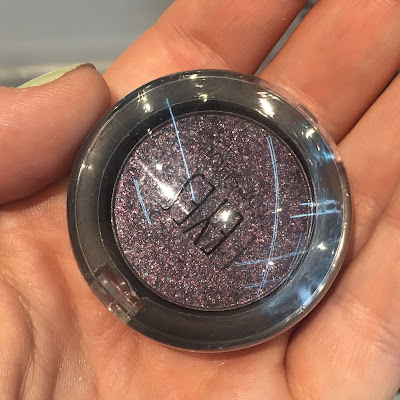 Holograph, on the other hand, is dazzling! Its pinky-blue flash reminds me of NARS Dual Intensity Eyeshadow in Cassiopeia. I can't wait to use this color on my inner corners: 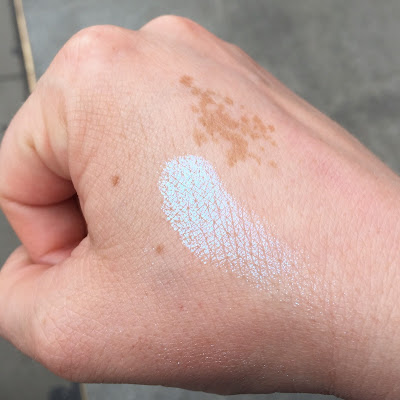 I've been in the UK for almost a month and have already bought six pieces of makeup: a lipstick, an eyeshadow, and four nail polishes. So I doubt I'll be picking up any more before I head back to the US, though you never know: that Barry M black lipstick is tempting. I'll try to review some of my new products once I'm back to a less hectic schedule, which should be soon, since we're leaving London tomorrow. I might also write a post about my travels: I feel a bit silly blogging about lipstick swatches when I've also been photographing 16th-century tapestries and 2,000-year-old lighthouses. Would that interest anyone?
Posted by auxiliary beauty at 4:25 PM