Seventeen is a British beauty brand that had never sparked my interest prior to last month's UK trip. It doesn't get much press in the blogosphere, probably because it's exclusive to drugstore giant Boots and so lacks a solid brand identity. Boots has two house beauty brands: the more famous and extensive Boots No. 7, which also offers a range of skincare, and the smaller, trendier Seventeen, which is geared toward younger shoppers. Having turned 17 almost a dozen years ago, I assumed that Seventeen had little to offer me: the name evoked images of brightly colored, poorly executed kiddie makeup. But one day I decided to swatch a few of Seventeen's eyeshadow singles, and though some were indeed patchy and cheap-looking, I came away very impressed with the shimmery neutral shades. Two in particular caught my eye: Rose Quartz, a purplish taupe, and Statuesque, a coppery rose gold.

Top to bottom: eyeshadow monos in Magenta (note that the matte formula is much less pigmented) and Rose Quartz, along with two matte lipsticks whose names I forget: 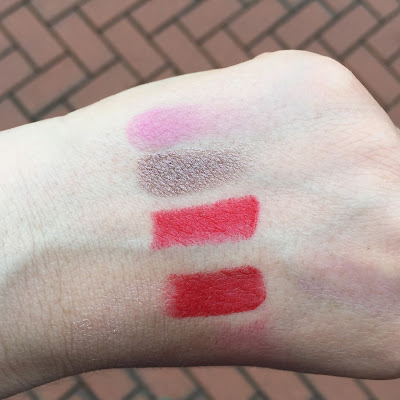 Eyeshadow monos in Brown (seriously, guys, are you even trying?) and Statuesque, first in indirect light, then in direct sunlight. For some reason, probably prolonged exposure to air, Statuesque swatched darker from the tester than it did from my new pan: 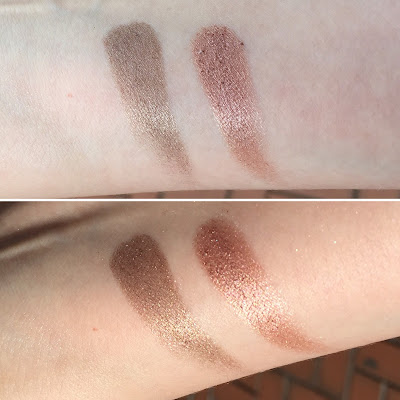 Rose Quartz was very similar to an eyeshadow in my theBalm custom palette, but I didn't have anything quite like Statuesque, so that was the only one I bought. Why does so much British advertising rely on painful puns like "eye eye"? This looks like your typical manicure-ravaging drugstore eyeshadow pot, but it opens with a clever mechanism: 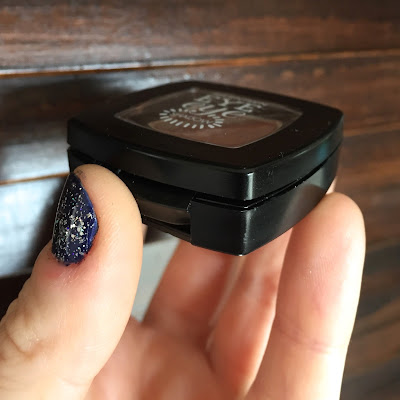 Push down on that latch, and the lid pops open—no need to wedge your fingernails into an evil little crack. Nice work, Seventeen!

The eyeshadow itself looks pinker in the pan than it does on the lid (this is after three weeks of frequent use): 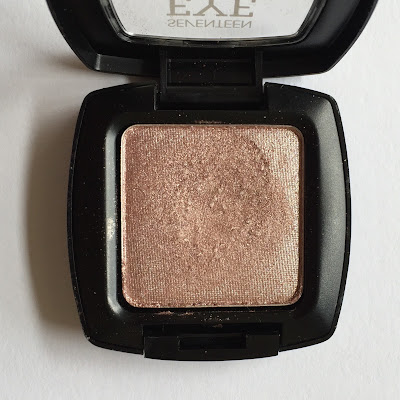 It occupies a nice middle territory in my eyeshadow collection: darker and more bronzey than my true pinks, but pinker and lighter than my bronzes. Top to bottom: finger swatches of theBalm Stand-offish, theBalm Stubborn, Statuesque, Maybelline Pomegranate Punk, Maybelline Bad to the Bronze: 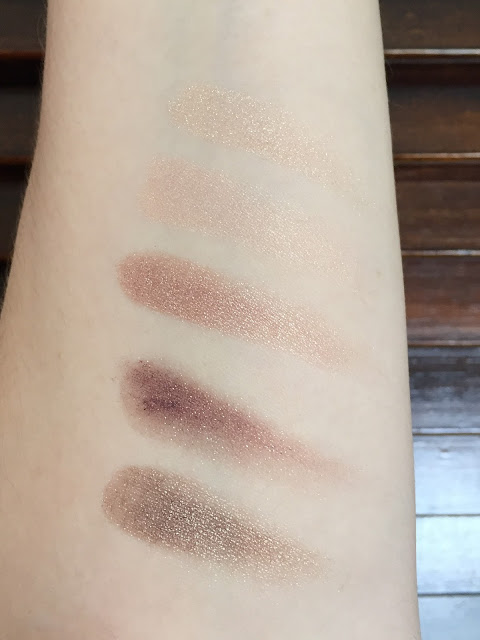 Blending out Pomegranate Punk produces a color similar to Statuesque (see this post for proof), but the large gold sparkles make Pomegranate Punk less subtle than Statuesque. I also don't think my pot of PP is long for this world: it's getting dry and hard to blend. By comparison, Statuesque's formula is very soft and blendable, but still opaque. (I don't buy many cream eyeshadows these days—I don't want to have to worry about them drying up and becoming unusable.)

Statuesque impressed me on first swatch, but it was my own absent-mindedness that revealed the extent of its versatility. For our nine-day visit to London, I left much of my eyeshadow in Birmingham, bringing only my Urban Decay Naked2 Basics, my theBalm custom palette, and Statuesque. I promptly misplaced my custom palette in our rented flat (it turned up on the last day, hidden in a stack of books on the nightstand), depriving myself of my usual grays and taupes, as well as some quirkier colors. I had to adapt to an entirely brown-based color selection, with Statuesque my only non-matte shade. It soon proved its worth both as a one-and-done shade and as the point of interest in a brown smoky eye. It also proved its durability, clinging to my lids (over primer, of course) throughout the long muggy days.

Here it is today, applied all over the lid (again, over NYX HD primer) and blended into the crease—no other eye makeup here except mascara: 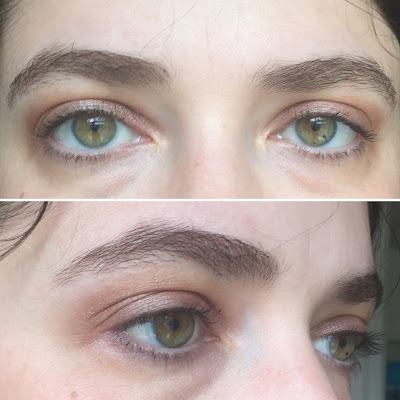 And the rest of my Independence Day look: Illamasqua Zygomatic blush, which I've been wearing for about a month straight, and Urban Decay Revolution lipstick in 69. (I'm also wearing shorts that match the lipstick exactly. AMERICA! And I bought those moonstone earrings at an outdoor market in Oxford last week.) 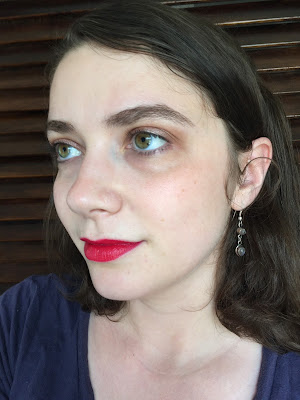 Something a little more complex, from last week: Statuesque on the mobile lid, Urban Decay Primal (a cool-toned medium brown from the Naked2 Basics palette) in the crease, and Urban Decay 24/7 liner in Demolition on the lashline. Unfortunately, I have such a light hand with eye makeup that all my "smoky" looks end up boringly work-appropriate (though I promise this looked smokier in person).

And here's the full look. My blush is Zygomatic again, and my lipstick is Bourjois Rouge Edition in Beige Trench, which I'll review next. 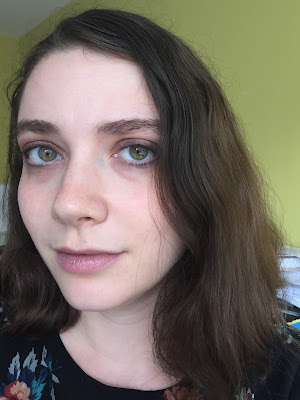 Wearing Statuesque for almost a week straight revealed not only its own versatility but also the versatility of the products I wore with it. Until last month, I'd never quite unlocked the potential of Demolition or the Naked2 Basics palette (note that I still haven't reviewed either one). Now, though, I feel a lot more confident with both products. It was useful to have my options limited so dramatically for a week, even if my chronic forgetfulness was to blame.

Happy Independence Day to my fellow Americans! (And happy belated Canada Day to those of you who don't have to worry about Donald Trump becoming your next president.) If you're still seeking the perfect summer cocktail, I highly recommend this bourbon slush punch from Smitten Kitchen: you squeeze some oranges and lemons, mix the juice with bourbon and strong black tea, and blend the mixture with crushed ice. We made it yesterday and have lots of punch mix left over for future revelry. 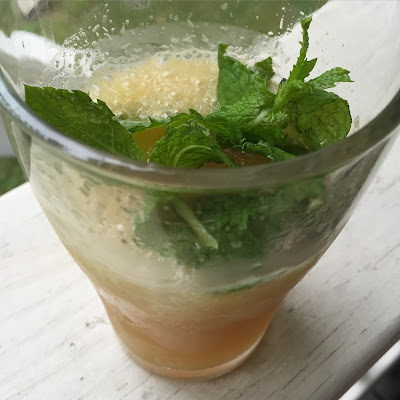 And by "future" I mean "imminent." Byeeee.
Posted by auxiliary beauty at 5:19 PM