I've been in three different time zones in the past week, and I feel weird. I originally planned to write this post two evenings ago while my skin absorbed the dewy coolness of a Tony Moly aloe sheet mask. Instead I fell asleep with the light on and my face unwashed. The same thing happened last night. Tonight, though, I will triumph over jet lag. And I'll be in one place for the next couple of weeks (I'm in San Francisco for my biannual visit), so I'll be posting a bit more frequently. That said, I'm working on my dissertation and preparing for another go at the job market, and I feel guilty when I use my precious and finite amount of writing energy on anything non-academic. I know it's irrational; I know that the energy I put into my blog isn't interchangeable with the energy I put into my academic writing. But it's so hard to relax these days. I haven't even been visiting my favorite websites very often. I used to read almost every article on xoVain and Into the Gloss, for instance, but in the past month or so I've been hard-pressed to read two or three articles per week (which might be for the best, given the variable quality of both sites). All this is to say that posts will appear when they appear. I'm not planning to quit this blog or take an extended hiatus, but I need to finish my doctorate, guys. I'm so tired of being an grad student.

Right now, though, I've got my aloe mask on and at least an hour of wakefulness left. Let's do this.

Travel doesn't lend itself to beauty experimentation or well-lit product photos, so all I have for you today is a collection of lipstick swatches from my visit to the Del Boca Vista Boca Raton Sephora four days ago. Here are some Urban Decay Vice and Kat Von D Studded Kiss lipsticks: 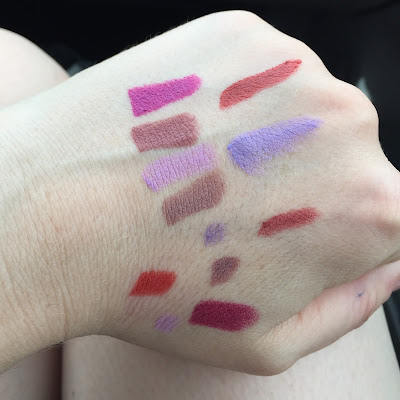 The reddish orange at bottom left is Urban Decay Temper. Left row, top to bottom: Urban Decay Crank (a dead ringer for NARS Angela), Backtalk, Vanity Kills, Oblivion, ignore those two tiny swatches, After Dark. Right row, top to bottom: Kat Von D Chula, Coven, Lolita (?). I tried on Vanity Kills, but it looked terrible. The name of that lipstick is apt: I need to stop immolating myself on the altar of white-based pastels. 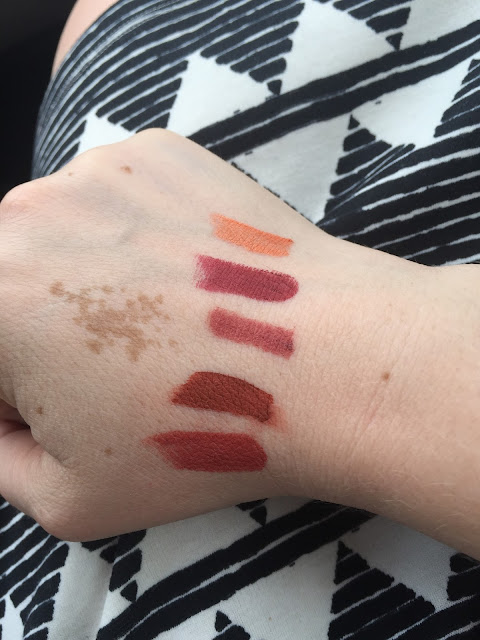 Here we have three rusty oranges, one rusty non-orange, and one non-rusty orange. Top to bottom: Kat Von D Solo (I can't imagine a complexion this shimmery nacho-cheese shade would flatter, but what do I know?), Kat Von D Archangel (?), Urban Decay Hitch Hike, Smashbox Always On liquid lipstick in Out Loud, Kat Von D Chula. Of these five, Out Loud is closest to my platonic rusty orange, but it's a little too brown. I still think MAC Chili is a better match.

Finally, I tried on a lipstick I'd been eyeing since its release in 2014: Kat Von D Studded Kiss in Poe. 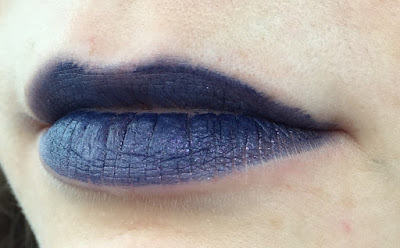 Granted, I applied Poe hastily with one of Sephora's disposable sponge-tip lip brushes, but I still feel confident saying the formula isn't perfect. It went on a bit patchy, refused to adhere to the inner part of my lower lip, and faded more quickly than I would have expected of such an intense color. The glitter also felt slightly gritty, though the formula itself wasn't drying despite its matteness. It did look pretty great from afar, even in a bleary-eyed car selfie: 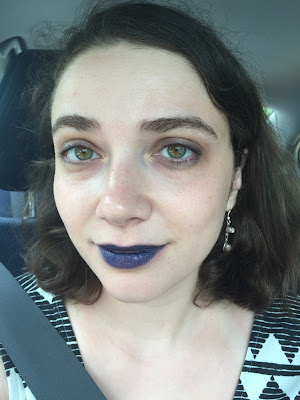 Navy is one of my most flattering colors, so it's about time I embraced it in lipstick form. I was surprised to find that I didn't feel as weird or conspicuous in Poe as I do in NYX Stone Fox, but maybe that's because dark blue lipstick has been entering the mainstream recently. I can think of quite a few non-indie blues off the top of my head: MAC Matte Royal, Urban Decay Heroine, Kat Von D Poe and Echo, Bite Squid Ink, the two blues in Maybelline's Loaded Bolds collection, and three of the new NYX Liquid Suedes. I think I'll have to pick up a navy lipstick when my no-buy ends in a few days. I'm leaning toward NYX Liquid Suede in Foul Mouth, because I know I like the formula and I don't want to pay too much for such a weird lip color, but I'd welcome suggestions!

Finally, a swatch of Revlon Super Lustrous lipstick in Violet Frenzy, which my mom bought last year, didn't like, and passed on to me. I guess I didn't like it much either, because I left it at my mom's house in January and forgot about it until I returned this summer. But since metallic and pearlescent lipsticks are apparently the Big New Trend, I've decided to give Violet Frenzy another chance. We haven't missed a beat in moving from the mid-late '90s to Y2K, have we? 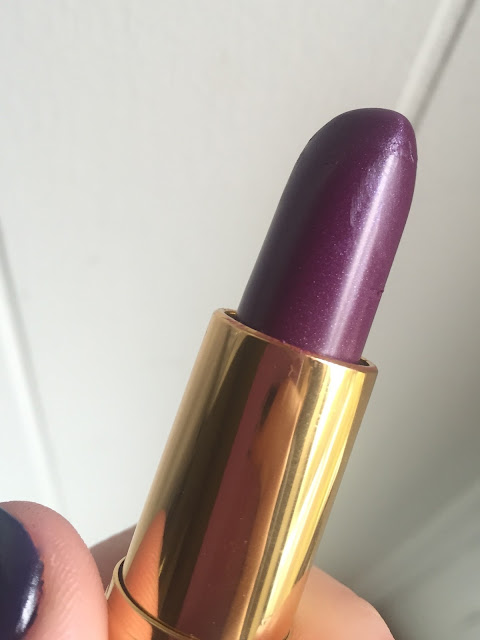 Like many an old-school vampy lipstick, Violet Frenzy lacks in opacity. It's a dark reddish purple with silver pearl, and it looks very dramatic in the tube, but swatches tell another story. Here's one swipe on the left and three on the right: 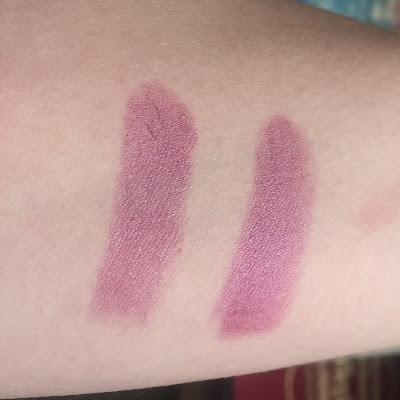 Violet Frenzy applies less patchily than my Super Lustrous nemesis, the absurdly overhyped Black Cherry, but it feels just as slippery, and the frost emphasizes every dry patch on my lips. I will say that it looks better from a distance than it does in a close-up lip swatch: 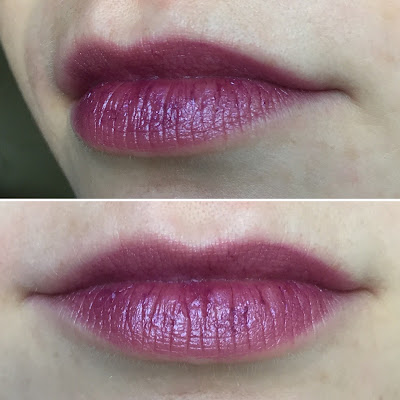 Remember when all the purple lipsticks on the market looked like this? Just four years ago, Violet Frenzy was the closest thing to true purple you could find at CVS. You'd go home with a tantalizingly dark and grapey tube, swatch it on your arm...and damn it, just another plum or merlot. You kids with your Milani and Maybelline and NYX purples, your Bite Lavender Jam and MAC Heroine and Snapchat and Pokémon Go, you have no idea how hard we 28-year-olds had it when we were 24!

Speaking of, I discovered recently that Seventeen Statuesque eyeshadow is a perfect complement to Lavender Jam; I also got a nearly undetectable haircut. I'm planning to go significantly shorter for the fall, though: I feel less like myself with shoulder-length hair. 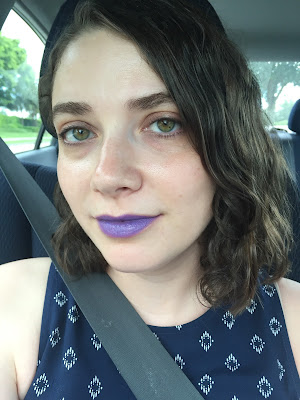 Here's hoping for a bit more coherence in my next post!
Posted by auxiliary beauty at 1:53 AM