I've spent the past two weeks in dissertation jail, bouncing between several of San Francisco's fine coffee shops while completing an extensive rewrite of my Hobbes chapter. With the help of massive doses of caffeine, sugar, and k-pop (I'm good, I'm hot, I'm fresh, I'm fly!), I wrapped up the damned thing yesterday and sent it to my committee. I started writing this post a week ago and have been typing a few lines a day in my spare moments, but it feels so good to finally have enough time to finish it. Of course, I have to start reworking my job materials almost immediately after this, but today is a day of freedom.


As many of you know, I grew up in San Francisco and come back twice a year to visit my parents. The city has changed dramatically (mostly in the direction of aggressive gentrification) since we moved here in 1995, but a surprising number of my old haunts have clung to life. One of those haunts is the Japan Center, a mall in Japantown where I spent many an afternoon in high school, eating crepes and buying elegant notebooks and cat-shaped erasers. Most of the stores I remember from ten or twelve years ago are still around, but my interests have shifted since then. I didn't care much for makeup when I was 16, but in the last two years I've discovered that a number of stores in Japantown carry Asian beauty products that are hard to find elsewhere in the States. I spent some time there with my high-school friend Jenny last week, and I thought it might be fun to give you a virtual tour of what San Francisco's Japantown offers devotees of sheet masks, lip tints, and nail stickers. Warning: this will be a photo-heavy post!

Our first stop in the Japan Center is a place I've been visiting since high school: the San Francisco branch of the Japanese bookstore chain Kinokuniya. I studied Japanese for nine years, from sixth grade through sophomore year of college, and though I'm nowhere near as fluent as I was at the age of 19, I still like buying the occasional Japanese fashion or beauty magazine to help refresh my vocabulary. 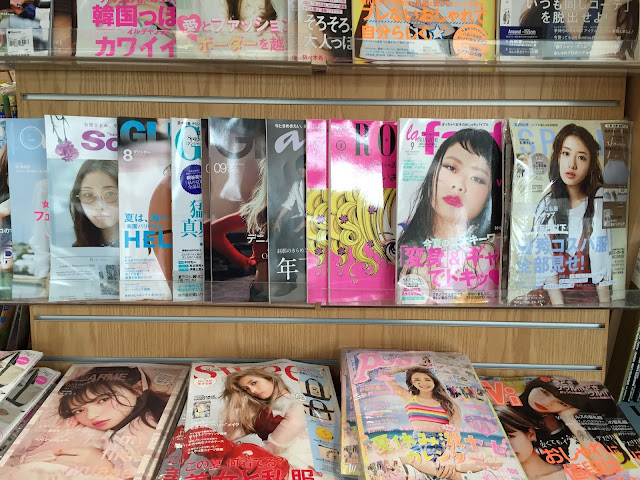 Leafing through Nylon Japan, I found the exact haircut I want for this fall (according to the caption, the bob conveys a "classic mood"): 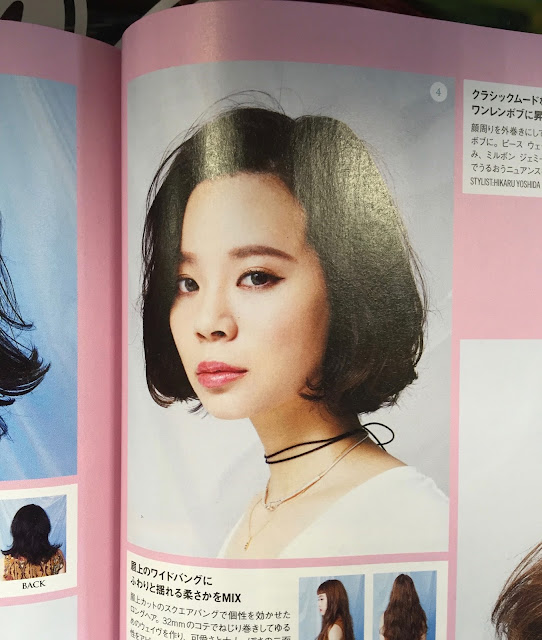 This time I bought the beauty magazine Voce (pronounced the Italian way: "vo-chay"): 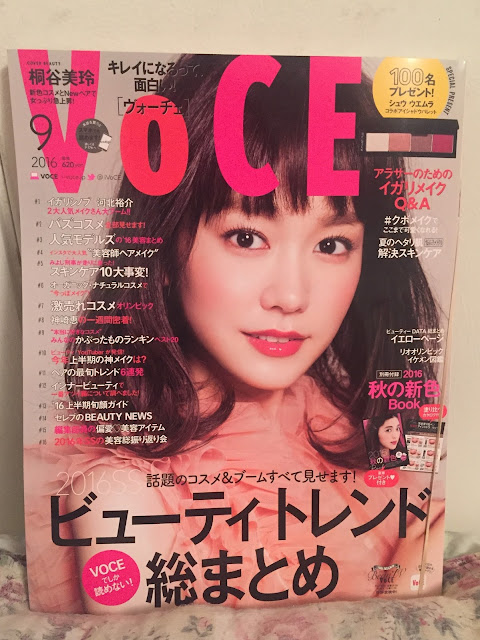 In Japan, such magazines often come with skincare samples, but since many Asian skincare products haven't been approved by the FDA, Japanese magazines usually reach American shelves stripped of their samples. Because, you know, all Americans have a God-given right to stockpile assault rifles, but heaven forbid we come into contact with a foreign moisturizer. Speaking of contraband skincare, I managed to find Bioré Aqua Rich Watery Essence somewhere in the Japan Center (I ordered my first tube on Amazon, it took three weeks to ship from Yokohama, and I just ran out). Since I'm pretty sure it's technically illegal to sell that divine sunscreen here, I'm not going to name the store where I bought two precious tubes for $15 each. Just know *conspiratorial whisper* it's available.

Our second stop is the deceptively small Candy Doll, which sells mostly Japanese and Korean skincare and cosmetics: 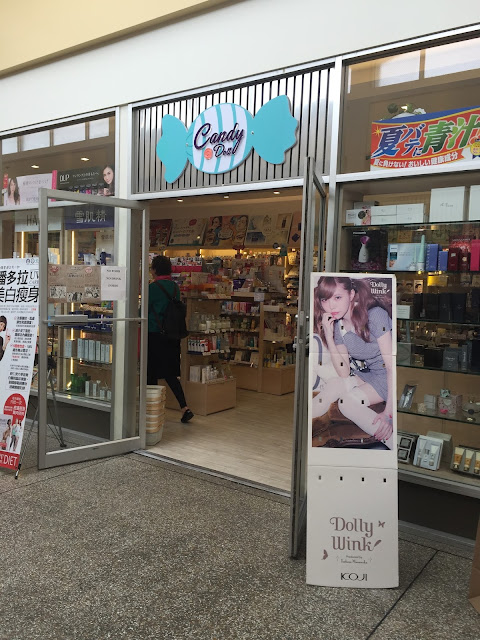 This suggestively posed manga girl behind the counter creeped me out a bit: 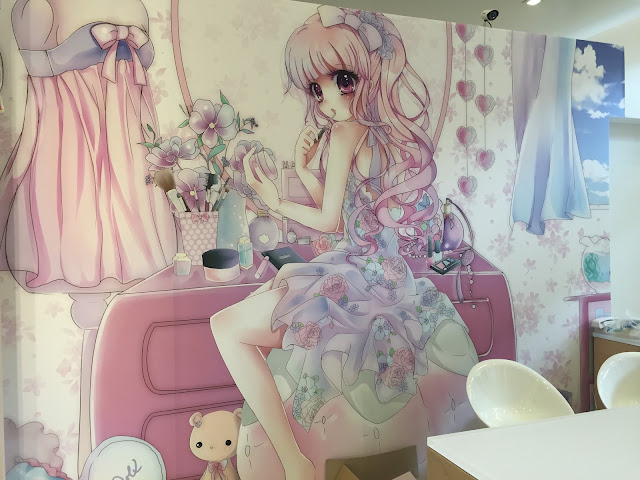 The sheer quantity of products crammed into this tiny space is almost overwhelming. There's an entire wall of false eyelashes: 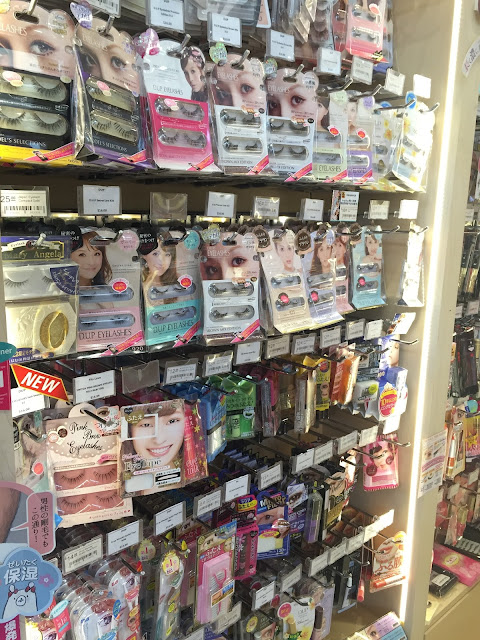 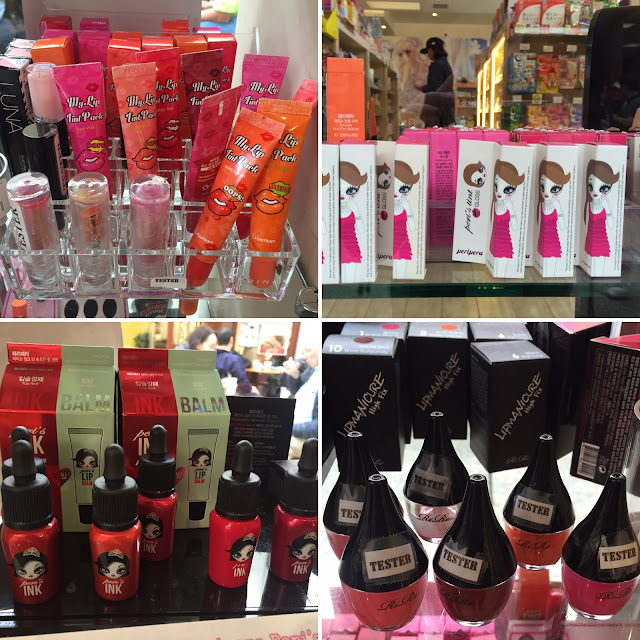 As adorable as these tints are, I wonder why the shade ranges are always so predictable: fuchsia, orange, pinky red, maybe a plum if you're lucky, but nothing too dark or purple or brown. I saw a price sign for the wine-bottle-shaped Labiotte lip tints, which I've been curious about for some time, but the tints themselves were nowhere to be found.

I was also drawn to Candy Doll's vast array of sheet masks, some with horror or folktale or horror-folktale themes (that green monster is a kappa, for instance): 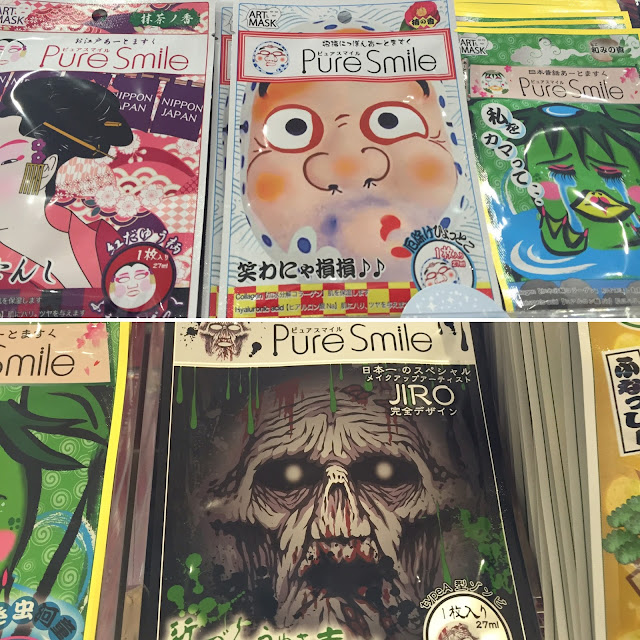 First prize for cutest packaging goes to these It's Skin BB creams... 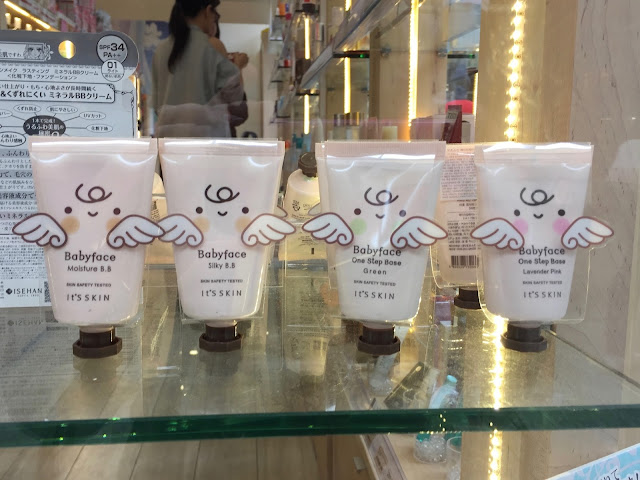 ...though the Brigitte Pure Cats eyeshadow palettes are a close runner-up. I've never heard anything about this brand; I suppose Paul & Joe is hogging the cat-lady spotlight. 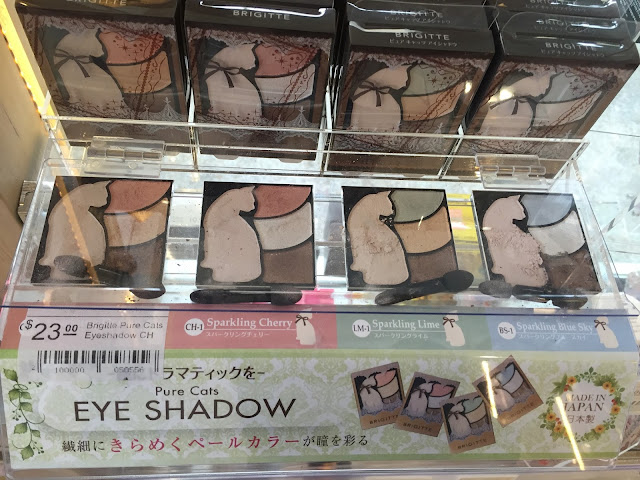 Now for a rather mysterious establishment, K-Pop Beauty: 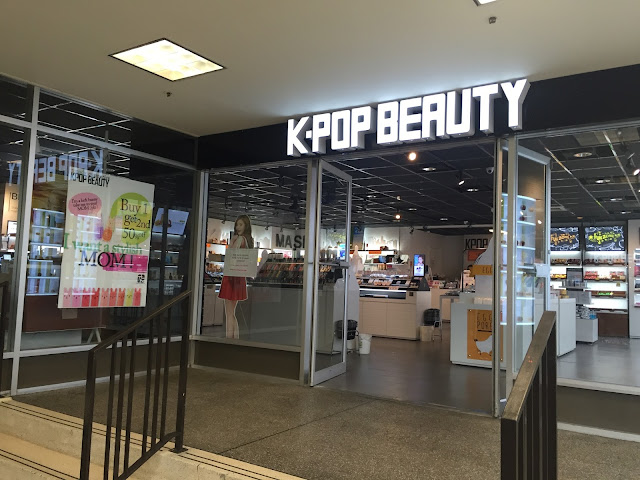 As recently as January, this was an official Tony Moly store crowded with life-size posters of the brand's international ambassador, Hyuna of k-pop girl group 4Minute. Here's a photo I took in January—you can see the Tony Moly sign behind Hyuna's head: 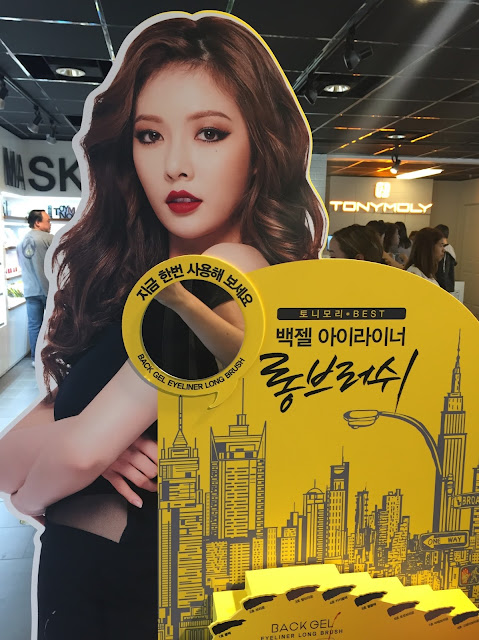 Since then, the storefront seems to have undergone the same fate as 4Minute, which disbanded in June. All of K-Pop Beauty's merchandise is by Tony Moly, but the posters on the walls have "Tony Moly" very obviously crossed out, and of course there's that odd name change. I would have asked one of the employees what was up, but I assumed their lips were sealed. 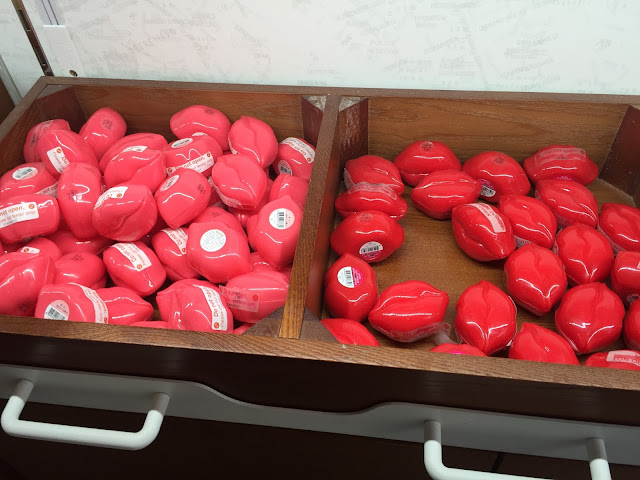 My best guess is that this particular franchise of Tony Moly lost its license and is now trying to liquidate its stock and get the hell out of Dodge (that would also explain the cardboard boxes piled in a corner of the store). Interestingly, Sohyun, the youngest member of 4Minute, was recently spotted selling her former group's merchandise at a flea market. The parallels are uncanny. Here's a question, though: if K-Pop Beauty is trying to get rid of all its lip tints and sheet masks, why hasn't it followed Sohyun's lead and lowered its prices?

Let's move on to a more legitimate business: The Face Shop. 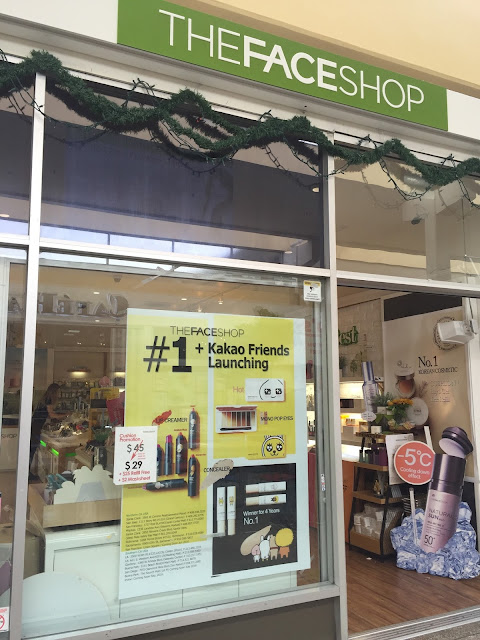 This brand's current campaign involves Kakao Friends, the animal characters from the Korean social-networking site Kakao. Never having used Kakao, I can't say I'm very enthusiastic about the new products, but they certainly are cute: 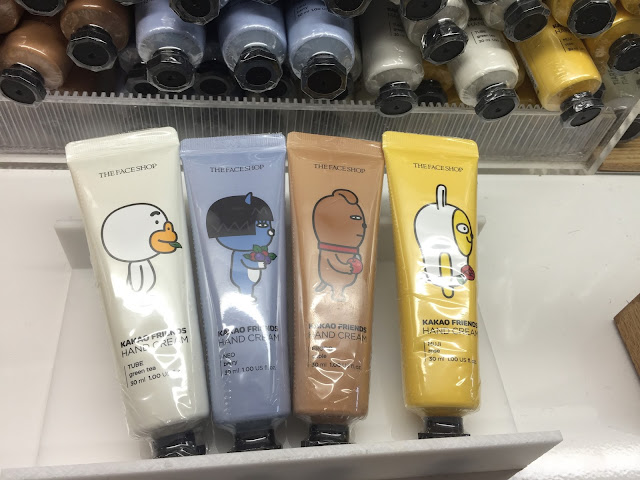 There's also some non-Kakao-related merchandise, such as these lipsticks. I didn't look too closely, since the last thing I need is a new lipstick and the colors seemed to be the same old pinks, oranges, and reds: 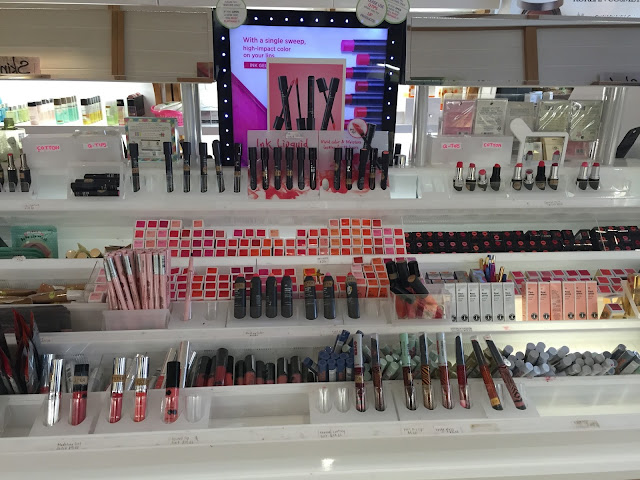 Our final beauty-related stop is the Japanese discount store Daiso, which specializes in offbeat housewares and other tchotchkes, almost all for $1.50. I don't know of another place where you can buy lacy sun-protection sleeves, metallic skulls, decorative nori punches, and plastic banana cases under the same roof: 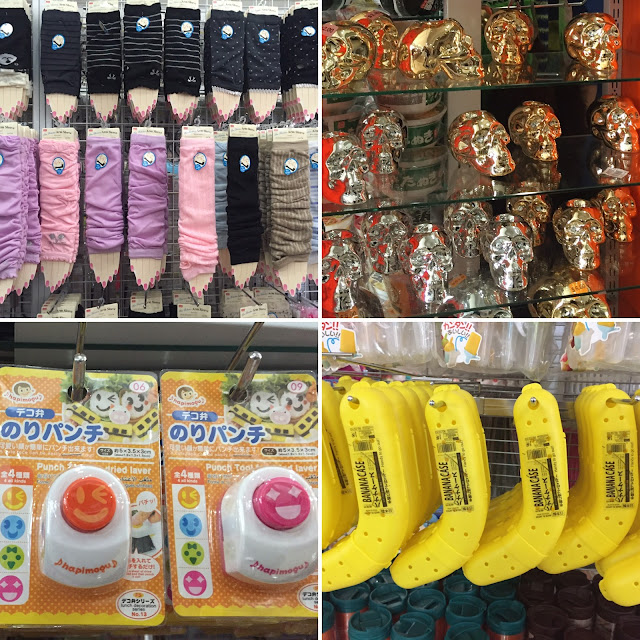 All this would be enough to warrant a visit, but Daiso also carries everything you need for a Japanese-style manicure. I've never seen so many Kleancolors polishes in one place: 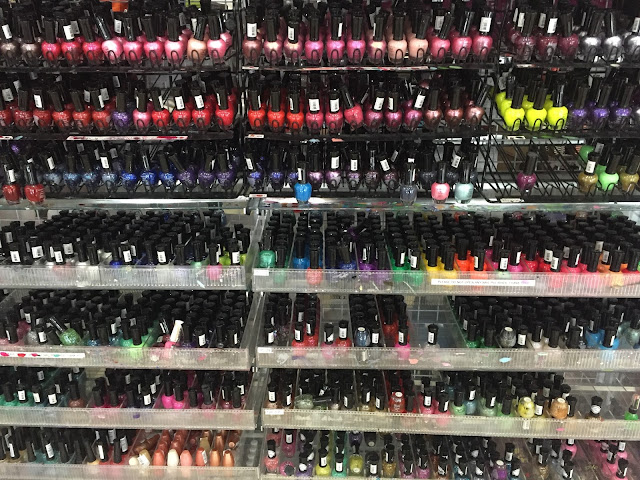 There are also lots of nail-art tools, stickers, gemstones, and even hand creams: 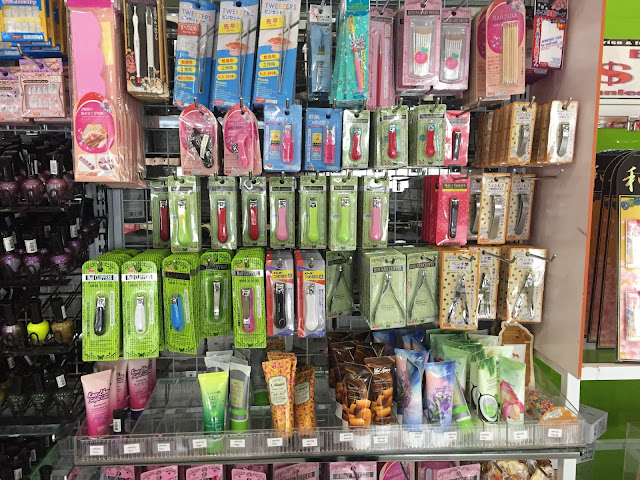 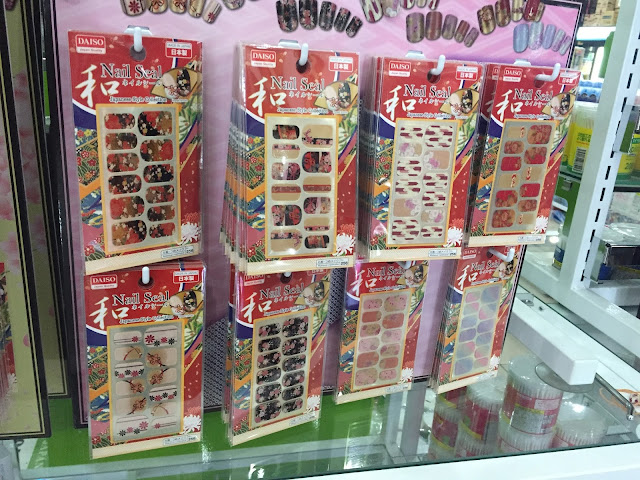 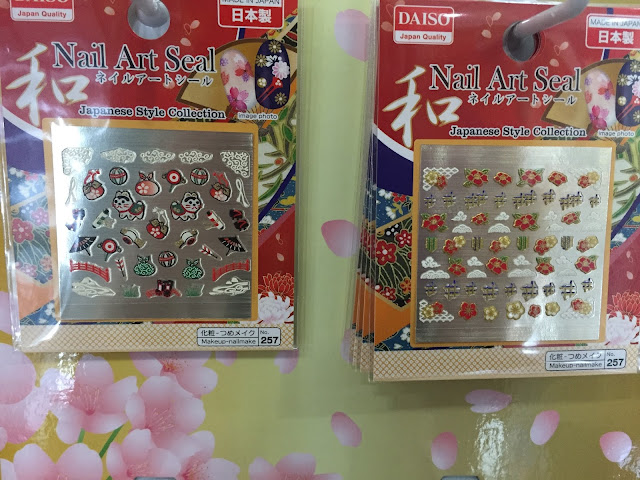 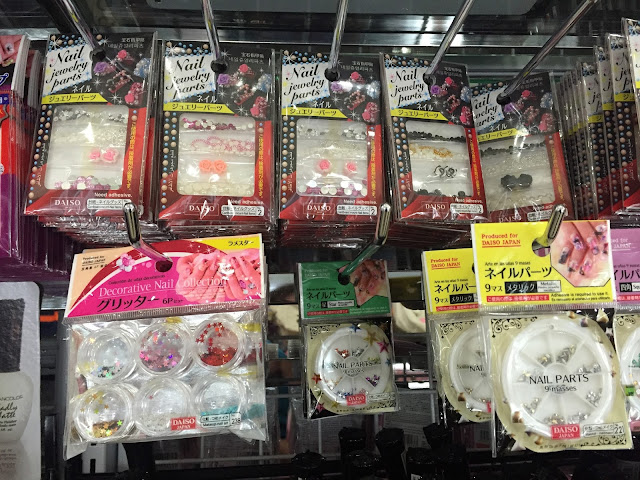 I couldn't resist buying the glitter stars in the photo above, as well as a pink nail-dotting tool with which I've already done two manicures (post to come).

If you're feeling peckish after all that beauty shopping (and even if you're not), no visit to Japantown is complete without some fresh mochi from Benkyodo, a bakery and diner that's celebrating its 110th anniversary this year. (Quick vocabulary lesson: "mochi" is the glutinous rice paste itself, as well as an umbrella term for the confectionery made from it; "daifuku" is the round, filled sweet that most of us think of when we hear the word "mochi.") The summer is a particularly good time to visit Benkyodo, since they often have daifuku filled with fresh strawberries or blueberries along with the usual sweet white-bean paste. I've eaten a lot of mochi in my life, in Japan as well as the US, and Benkyodo's strawberry daifuku is the best I've ever had.


And that concludes our tour of Japantown! I doubt the Japan Center can hold a candle to, say, Toronto's Pacific Mall for sheer variety, but it's still a great place to poke around if you're a beauty lover passing through San Francisco. Have you ever visited?
Posted by auxiliary beauty at 3:51 PM