I just finished The Scar, the second book in China Miéville's Bas-Lag trilogy, which takes place in and around the diverse, sprawling, corrupt city of New Crobuzon. I love fiction about cities—not just set in them, but about them—and Miéville clearly shares my passion. The Scar centers on the linguist Bellis Coldwine, ex-girlfriend of the protagonist of the first Bas-Lag novel, Perdido Street Station. Fearing that New Crobuzon's militia will arrest her for knowing too much about the catastrophic events of Perdido Street Station (though in fact she knows nothing), Bellis flees the city for one of its far-flung colonies. But her ship is captured and taken to Armada, a floating pirate city built entirely on boats and ruled by a vampire, a pair of sadomasochistic lovers, a council of women with scarabs for heads, et al. So much is contained in that "et al": Miéville has an astonishingly fertile imagination, and while that occasionally works against him in Perdido Street Station—lots of self-indulgent set pieces that divert the reader but fail to advance the plot—The Scar is shorter and tighter, yet still overflowing with invention. (I assume Miéville got a better editor in the two years between Perdido Street Station and The Scar. God bless good editors.)

Miéville's worlds are fleshed out exhaustively, and his eye for detail extends even to Bellis Coldwine's makeup. Bellis is blunt, unemotional, and standoffish, and her lipstick signals as much. In Perdido Street Station, we learn just three things about her: she's a brilliant linguist, she left the protagonist due to his flightiness, and she always wore dark purple lipstick. The Scar reveals that her taste in lipstick has stayed remarkably constant over several years. In a letter, she describes her "[l]ips and hair stained the cold purple of bruises," and a teenage boy mentions that "[s]omeone had told him about 'a scary lofty lady in black with blue lips' working in the library." The novels were published in 2000 and 2002, and something tells me that Miéville's girlfriend wore at least one of the weird MAC shades that were available in the late '90s and early '00s. Something like this, maybe: 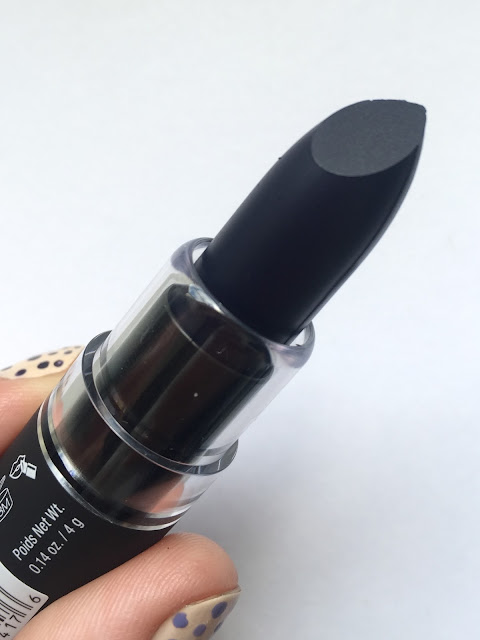 It was pure coincidence that I started reading The Scar shortly after trying on Kat Von D Poe, but that coincidence got me thinking more seriously than ever about acquiring a navy-blue lipstick. Maybe the beauty industry has also been reading Miéville, because this has been the summer of the navy lip, with almost every quirky beauty brand (and a couple of the more buttoned-up ones, like Maybelline) releasing at least one blue lipstick. I wasn't crazy about Poe's formula and didn't want to spend $21 on a lipstick I might not wear often, so I began casting around the interwebs for a cheaper alternative. My search led me to NYX Liquid Suede in Foul Mouth, a grayish navy blue. But when I went to San Francisco's lone Ulta to check it out in person, I discovered that in addition to expanding the Liquid Suede collection, NYX had released at least three new lipstick lines, including "Turnt Up" (shudder) and "Velvet Matte": 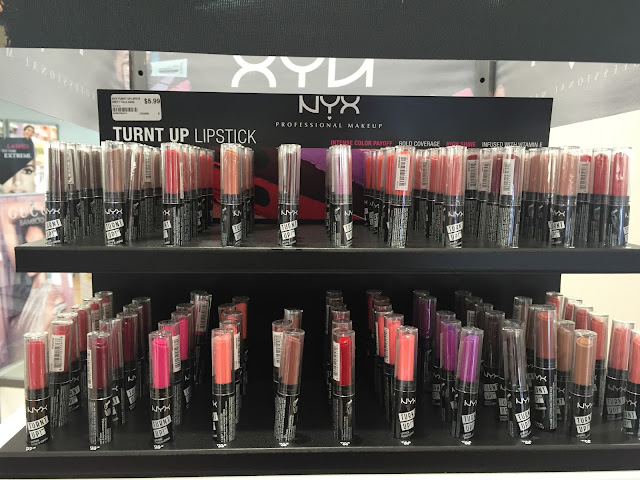 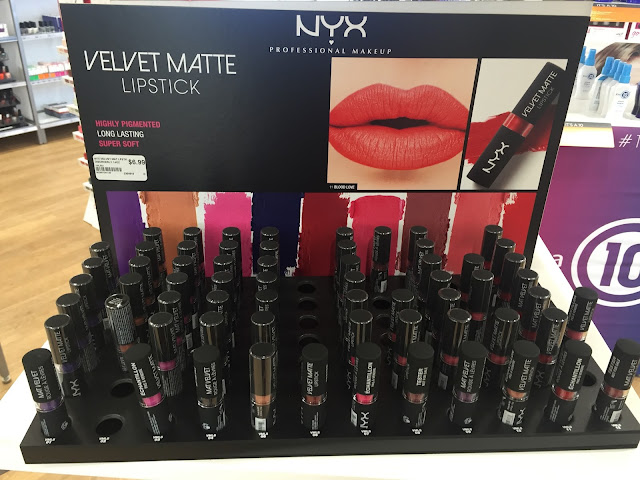 I was taken aback by the Velvet Matte lipsticks, since NYX didn't seem to have discontinued their perfectly good matte lipstick line (they expanded that line in January, actually). But the Velvet Matte line offered some interesting colors, including a navy called Midnight Muse, so I had myself a swatch. And, um...the formula sucked overall. Most of the shades were dry and patchy, far from the "highly pigmented" and "super soft" formula that NYX promised, and far from the quality of NYX's original matte collection. Below, I've swatched eight of the 12 Velvet Mattes next to a couple of the new Liquid Suedes—check out the dramatic difference in pigmentation:


I chose Foul Mouth over Midnight Muse, but when I tried it on at home, I discovered that it was almost indistinguishable from the Liquid Suede in Stone Fox, which I already owned. Here's Stone Fox on the left and Foul Mouth on the right; SF leans more gray-green and FM more blue, but they're similar enough that I don't need both: 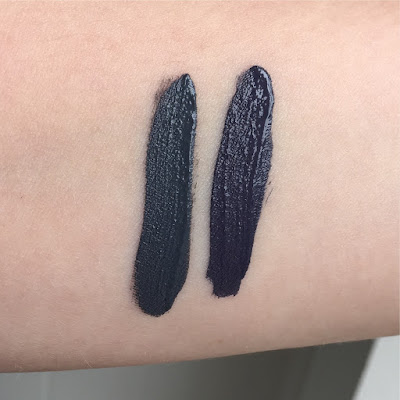 And here I am wearing Foul Mouth. I was surprised at how gray it appeared on my lips: 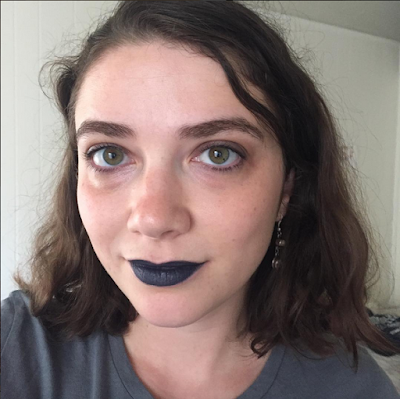 Not bad, but not the color I was expecting. So I went back to Ulta and exchanged it for Midnight Muse (they're the same price: $6.99), which turned out to be much closer to the color I wanted. It's a pretty dead-on dupe for KvD Poe as well, though of course it lacks the pink sparkles that make Poe unique.

The Velvet Mattes and the OG NYX mattes come in similar no-frills black-and-clear tubes, though the black of the Velvet Matte tubes is, well, more matte. Here's Midnight Muse atop a postcard with an 1890s image of the now-ruined Sutro Baths: vaguely Miévillian, I thought. 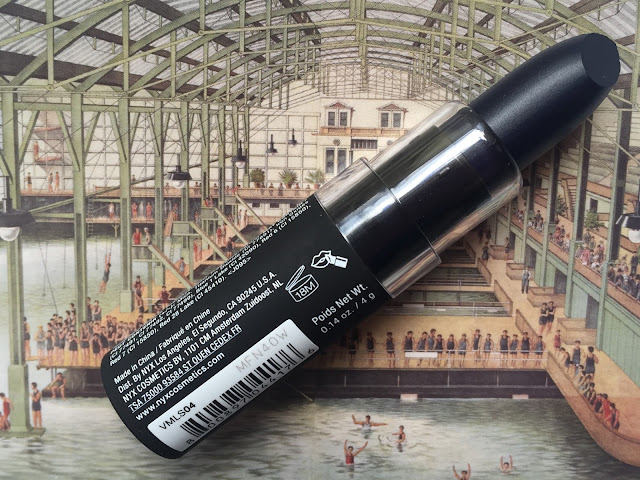 Arm swatches—one pass on the left, two on the right: 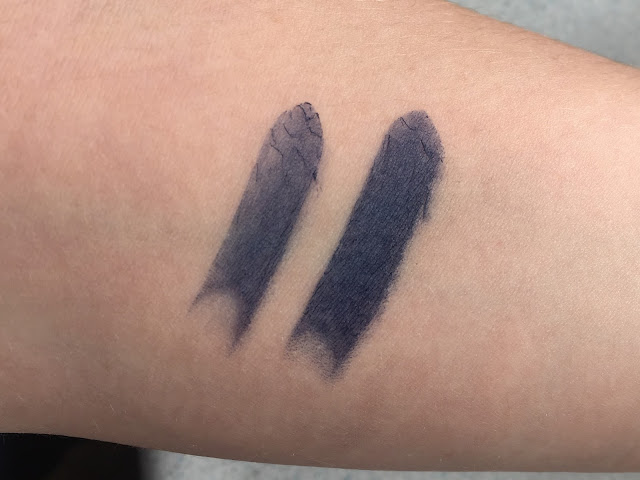 When my mom (from whom I get my coloring and my love for weirdo drugstore makeup) saw me wearing Midnight Muse, she liked it so much that she went out and bought a navy lipstick for herself: Maybelline Loaded Bolds in Midnight Blue. L-R: Midnight Blue, Midnight Muse, Stone Fox: 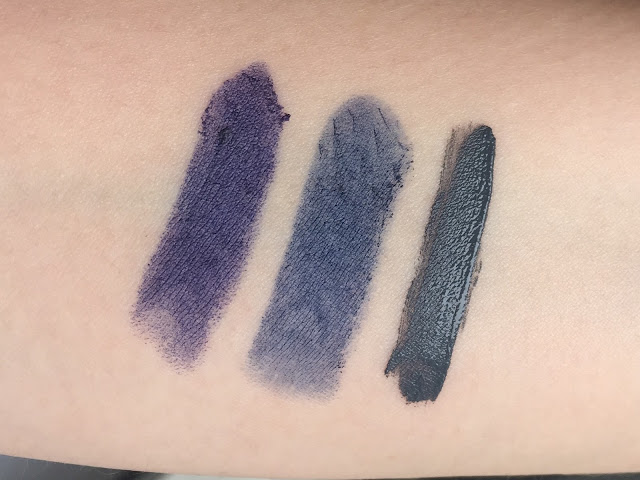 Midnight Blue is brighter and more purple than Midnight Muse, which contains a bit of gray. MB looks more opaque than MM in this photo, but its slippery texture actually makes it a bit streaky on the lips, and it fades quickly. My mom is a germaphobe and wouldn't let me try on Midnight Blue, so I'm working off what I observed when she wore it to dinner one night.


Unfortunately, Midnight Muse's formula leaves something to be desired. It's not as patchy on the lips as it looks in the arm swatches above, but it needs two or three coats for full opacity, and I have a hard time getting it to adhere to the inner part of my lower lip. The dryish texture gives it more lasting power than a slick lipstick like Midnight Blue, but it does fade with eating and drinking (though it doesn't transfer much), and faded navy lipstick isn't cute. It also feels a bit tacky when I press my lips together, which I don't mind but some people might. However, I'm happy to report that though Midnight Muse is dry and almost totally matte, it's not drying: in fact, it's comfortable to wear and leaves my lips slightly hydrated. And even with all these caveats, Midnight Muse is no worse than Poe. Almost any bullet lipstick in a weird dark color is going to be somewhat high-maintenance. It's up to you to decide whether the color is worth the maintenance; for me, it is. None of the problems I've listed is a dealbreaker for me, as extreme dryness or slipperiness would be.

Here's a couple of coats of Midnight Muse on my lips, first indoors... 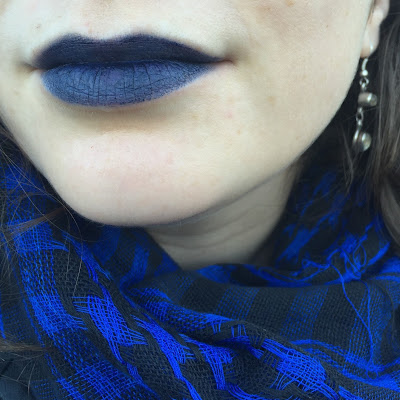 Midnight Muse in context, indoors (feat. some relics of my childhood)... 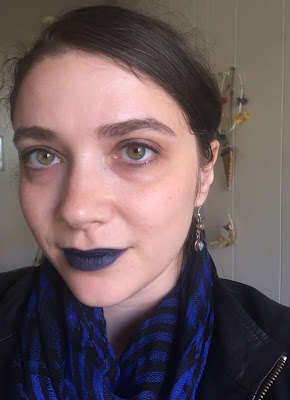 ...and outdoors, before cocktails at the Slanted Door (the light glinting off the bay clearly washed me out a little). These photos were taken on the same day; I'm wearing NARS Lhasa eyeshadow, Kiko Intense Colour Long Lasting Eyeliner in Black, Illamasqua cream blush in Zygomatic, and probably a bit of ColourPop Lunch Money highlighter. 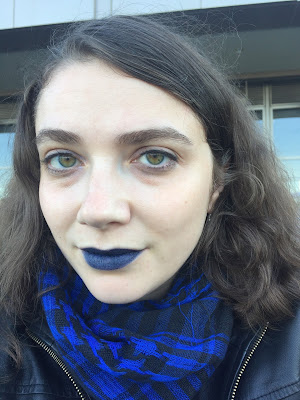 As with Stone Fox, I'm surprised at how comfortable I feel in this offbeat shade. I've long gravitated toward dark lip colors—plum, mahogany, burgundy—and Midnight Muse seems closer to those colors than it does to lighter, brighter blues. Unlike Bellis Coldwine, I won't be wearing my navy lipstick to the library this fall, but I suspect it will get a fair amount of wear. Even though I don't live in a floating pirate city—yet.

Given the subject of this post, I'd be remiss not to mention one of the best items in Sephora's current end-of-summer sale. The Studded X Mini Lip + Nail Polish Duo ($7.50, reduced from $15) features a mini Kat Von D Studded Kiss lipstick and a matching Formula X nail polish. Poe is still available, as are Coven (matte lavender) and Slayer (matte black). I ordered Mercy (metallic berry) last night, but it has since sold out. Despite my misgivings about Kat Von D as a person, I've been curious about her brand for a long time, and I've been impressed with both of the Formula X polishes I've tried. Worth a look if you're drawn to navy lipstick but don't want to splurge on a full-sized one!
Posted by auxiliary beauty at 10:26 PM