I Guess I Wear Eyeliner Now: Urban Decay 24/7 in Demolition and Kiko Intense Colour in Black

Longtime readers of my blog will know that I've struggled with eyeliner for my entire makeup-wearing career, which now spans six years. One of my first ventures into makeup involved a black Maybelline pencil eyeliner, with which I drew awkward, thick lines across my upper lashline. To my credit, I soon figured out that this looked terrible, but my second attempt wasn't much better: I spent a good three years trying on and off to perfect a cat eye with a black liquid liner, Maybelline Line Stiletto in Blackest Black. I was eventually forced to conclude that the outer folds of my eyelids would always foil my attempts to wing out my liner. Cat eyes were just not going to happen for me, no matter how many articles and YouTube tutorials swore that everyone—yes, everyone—could achieve Elizabeth-Taylor-in-Cleopatra perfection. Finally, I settled on black or dark brown eyeshadow smudged along my lashlines with a narrow brush. That gave me a bit of definition without the challenges of a pencil or a felt-tip applicator, and I resigned myself to not being an eyeliner person at all.

But the existence of bona fide eyeliner was a constant thorn in my side. Here was a whole category of makeup that, along with crop tops and empire-waist dresses, I'd decided I simply couldn't wear. Would my eyeshadow looks always seem unfinished due to my avoidance of eyeliner? Would I never know the joy of swiping on a simple black liner to set off a red lipstick? I was a beauty blogger, for fuck's sake: wasn't it was my duty to master a product as basic as eyeliner? So last November, I bought Urban Decay's 24/7 Glide-On Eye Pencil in Demolition, a cool-toned dark brown...and then avoided it for seven months, as if it were That One Guy in my graduate program whom I always pretend not to see in the local coffee shop. (There's more than one That One Guy.)

I swear I photographed Demolition when it was new, but of course I can't find the photo now. This is what happens when you wait nine months to review a product, kids. Here's Demolition today—it's about half gone after two months of frequent use (3-4 times a week): 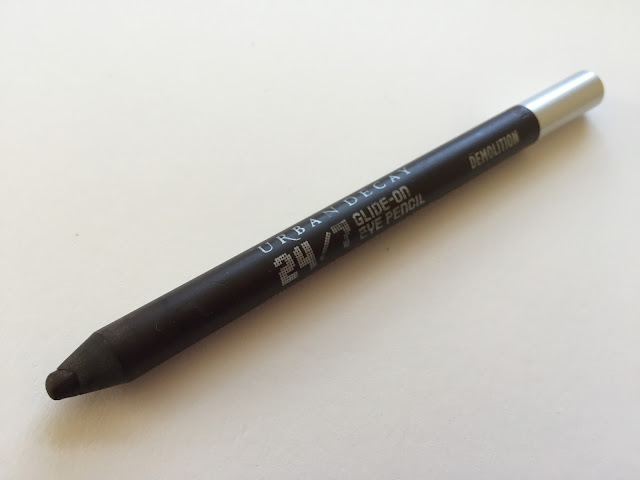 I didn't start wearing Demolition regularly until my visit to London in June, when I came to appreciate it as a crucial component of a quick semi-smoky eye. Because the 24/7 formula is so soft, it's easy to finger-blend Demolition into a shimmery eyeshadow like Seventeen Statuesque and deepen the crease with a matte brown like Cover from the Urban Decay Naked2 Basics palette:

After coming to terms with Demolition, I found myself wanting a black liner to go with cool-toned eye looks. The cruelty-free Italian brand Kiko Milano recently opened a store in Birmingham's Bullring mall, so of course I paid it a visit. After sorting through what felt like dozens of options (Italian ladies must love their black pencil eyeliner), I settled on the Intense Colour Long Lasting Eyeliner in #16 Black: 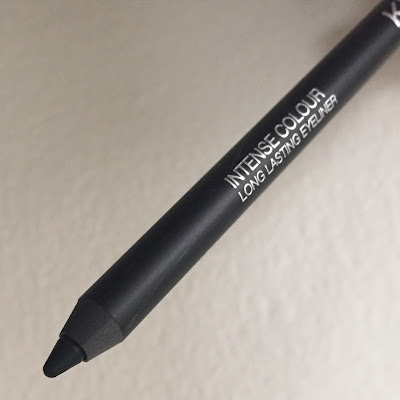 Demolition on the left, Black on the right—they haven't been sharpened in a few days: 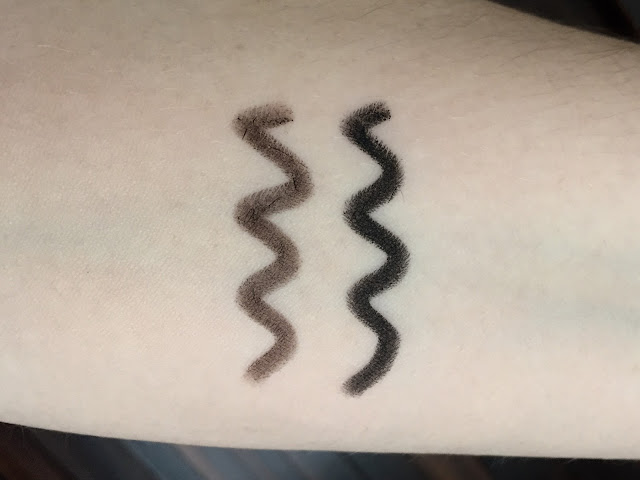 Though I started out smudging these two pencils along my upper lashline, I've since worked out a technique that I think approximates tightlining. Maybe it really is tightlining? I don't know. My understanding is that tightlining involves the upper waterline and, as a contacts-wearer, I shudder at the thought of putting pigment there. Instead, I pull my mobile lid taut and draw the thinnest line possible along my lashline, making a series of little dashes and working the color into the spaces between my lashes. This was very difficult at first (unsteady hands, uncontrollable blinking), but after a month of practice, I'm getting it right almost every time. Ironically, I've returned after all these years to a refined version of the first eyeliner technique I ever tried.

Now for a couple of mini-reviews of the two liners I've been wearing almost every day since June: 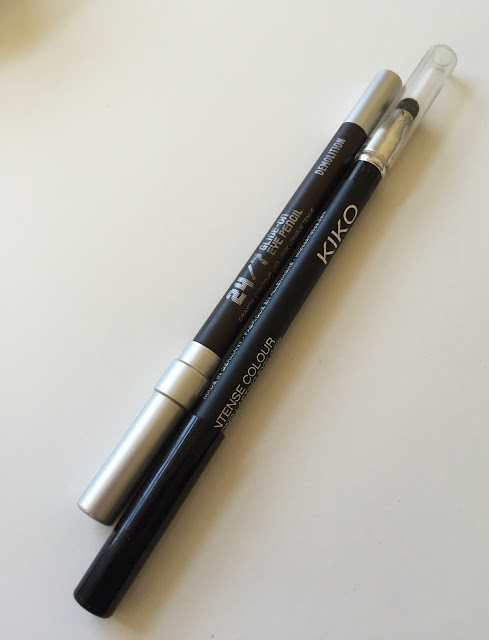 Demolition ($20 at Sephora) has a very soft and pigmented formula. The texture presents challenges as well as advantages. When I smudge Demolition along my upper lashline, some color always leaps with ninja-like stealth to my lower lashline, if not immediately then in a couple of hours. I'll be congratulating myself for executing a decent eye look for once in my goddamn life, and then I'll notice that half the pigment has managed to transfer itself to the already-dark spaces below my eyes. This was the problem that forced me to work out my tightlining technique, and when I don't smudge the liner, it stays in place almost all day. But I think $20 is a high price to pay for an eyeliner that disappears as quickly as Demolition does (soft formula = more frequent sharpening), and after I use up Demolition, I might cast around for a cheaper alternative.

Here's a quick look from last week's trip to LA: Seventeen eyeshadow in Statuesque, an unsmudged line of Demolition, Illamasqua Zygomatic blush, ColourPop Lunch Money highlighter, MAC Antique Velvet lipstick, and a seatbelt because sitting in a car is a huge part of any visit to LA and you might as well take selfies while stuck in the inevitable traffic (and no, I still can't drive): 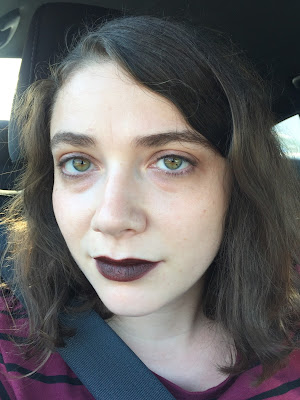 Black ($8 on the Kiko website) is similarly pigmented but less soft, despite coming with a sponge tip meant for smudging the pigment: 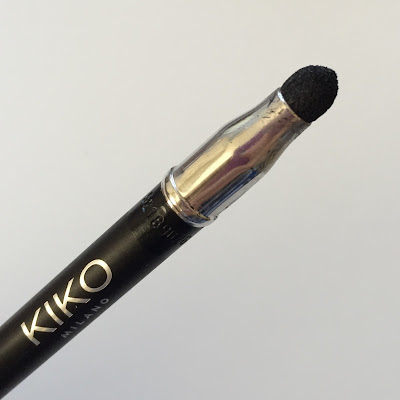 I was excited about this nifty little feature until the first time I used it, at which point I realized that the sponge is too firm and rough to do more than chafe my eyelid and remove the product that's already there. Sometimes I smudge the liner with my finger, but more often I just draw a thin line and go on my way. Here's a swatch of Black smudged with the sponge, to give you a sense of how ineffective it is (and this is on my arm, a much firmer surface than my eyelid): 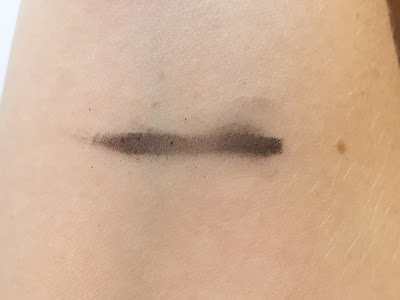 Here's an unsmudged line of Black with theBalm Selfish, the taupe in the Nude 'tude palette:

Full face, with Sleek Life's a Peach blush and Revlon Fire and Ice lipstick (I'd just seen Hitchcock's To Catch a Thief and was captivated by Grace Kelly's taupe and coral makeup). As you can see, Black doesn't read as EYELINER! here so much as a bit of extra definition. Since my eyes are large and quite deep-set, too much definition can throw off the balance of my face. 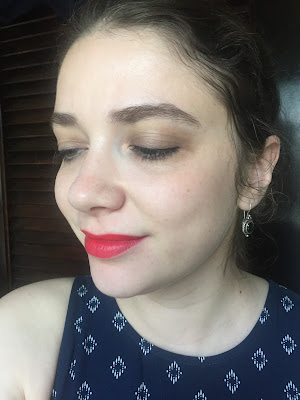 Black has a more impressive wear time than Demolition: I wore it to the gym on a very hot afternoon two days ago, and though some color had transferred below my eye by the end of my workout, my upper lashline was as dark as ever. Below, I've used a cotton pad to rub my swatches of Black (top) and Demolition a few times; the difference is obvious: 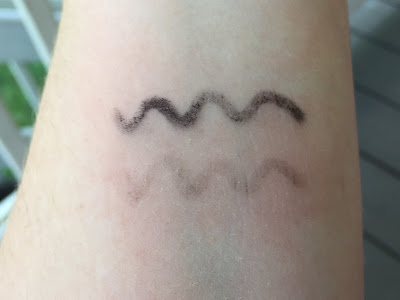 I can remove Demolition with my usual cleanser, Lush 9 to 5, but I need bigger guns for Kiko: namely, Vaseline on a tissue. Forget micellar water, coconut oil, whatever you kids are using these days: there's no more effective eye-makeup remover than plain old petroleum jelly (I don't even buy the name brand).

And there you have my adventures in eyeliner for the last nine months or so. I'm still a bit sad that cat eyes continue to elude me, but I'm glad to have found an eyeliner method that works for my eye shape and aesthetic preferences and doesn't slow me down when I have somewhere to go. What are your favorite pencil eyeliners?
Posted by auxiliary beauty at 12:43 PM