Earlier this year, I attended a department dinner in honor of a visiting speaker.  One professor decided that the best topic on which to engage the graduate students near him was opera. He held forth about the various operas he'd seen recently in New York, and it turned out that quite a few of my classmates also enjoyed opera. I sat there in unaccustomed silence until the professor turned to me: "Do you go?"

There was no polite way to say "I barely have enough money for groceries," so I spluttered something about an opera I'd seen years ago on a standing-room ticket. He asked me which opera. I couldn't remember the title. I wanted to disappear.

Ironically, I grew up surrounded by classical music. My father was a classical guitarist who performed almost every day in the Harvard Square subway station for close to a decade. If you passed through that station between 1986 and 1995, there's a good chance you saw him. But when the city of Cambridge abolished rent control, we could no longer afford to live there, and we moved to San Francisco (another irony, given how prohibitively expensive the Bay Area housing market has become). My dad spent a few years playing guitar at Ghirardelli Square before the money dried up and he went back to school. My mother worked as an assistant teacher in public schools. We weren't destitute—I had cute '90s Gap Kids clothes and a sizable Barbie collection and enough to eat—but money was always tight and the flow of income was never steady. Learning to buy nice things for myself without feeling racked by guilt has taken me a long time. During his last visit, my boyfriend couldn't believe that I'd been using a rusty old teakettle for years: "You've been drinking rust!" It had literally never occurred to me to buy a new one, because my old one still boiled water, and that was what I needed it to do.

I'm very privileged in some ways, especially where education is concerned. I graduated from college with less student debt than many millennials, and I'm finishing a PhD from a prestigious university. But growing up with financial instability has left its mark. Academia may promote (or think it promotes) liberal values, but it also attracts a lot of people from wealthy backgrounds, people who are often unaware of their own privilege. In the company of such people I often feel tense and guarded, afraid of committing some gross faux pas every time I open my mouth. This isn't a constant state of existence for me, but certain situations do bring it on—and so, it appears, do certain lipsticks. Enter Marc Jacobs Le Marc Lip Creme in Rei of Light. 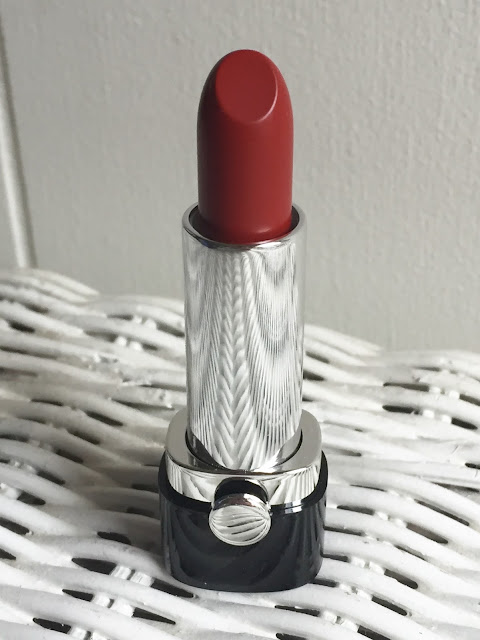 I bought Rei of Light almost a month ago, but I've worn it only a few times. Because I paid $30 for it, more than for any other lipstick I currently own, I feel a bit anxious every time I think about it. Is it really the precise color I wanted? Shouldn't I return it to Sephora if I have any quibbles about it whatsoever? Couldn't I have spent that $30 on something I needed more? Rei of Light has become a pumpkin-spice-colored albatross. Every time I pull it out of my box of lipsticks, some part of my brain says OH YOU THINK YOU'RE FANCY HUH and I cringe. The worst part is that I know designer makeup lines are marketed to people like me, people who can't afford a Marc Jacobs dress or coat but can drop $30 on a high-end lipstick. Which means that my $30 lipstick purchase is itself a marker of the aspirational consumerism that I claim to hate! Gah! Why can't I just enjoy things without overthinking them? I don't know, but I hope reviewing Rei of Light will persuade me that it really does belong to me and I deserve to wear it without guilt. 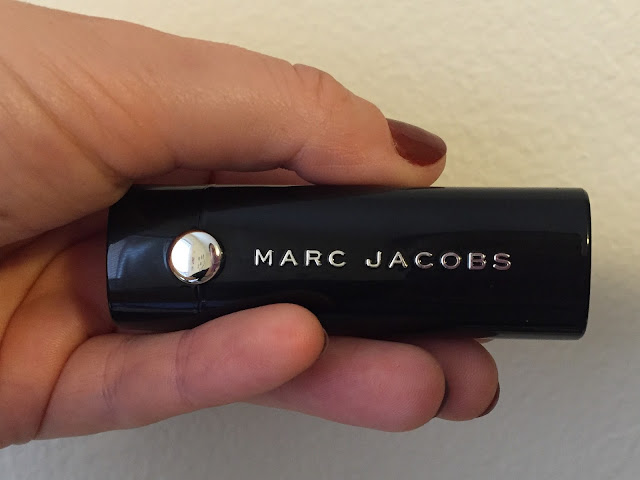 The Le Marc packaging is simple and elegant: a black-and-silver tube and a shiny black cap with raised silver lettering (a little too conspicuous for my taste) and a magnetic closure. I wish the lipstick bullet were sharper, but the rounded end isn't as hard to work with as Urban Decay's flattened Revolution bullets were. I find myself doing a bit of cleanup with my fingers after application, but it's not a huge problem. 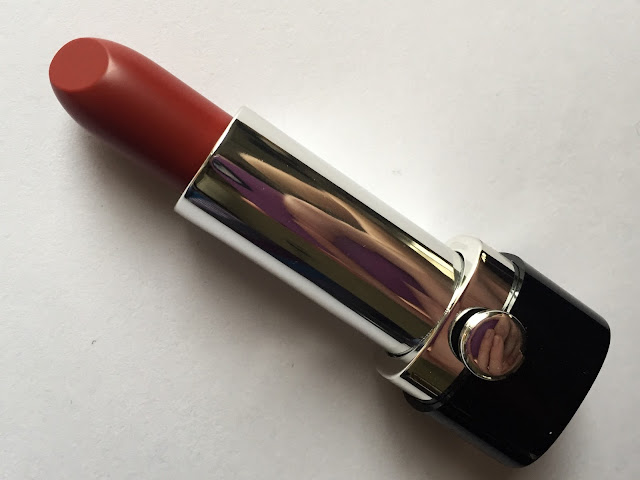 I've now tried two Le Marc Lip Cremes, So Sofia (which I returned) and Rei of Light, and I've found them to have more or less the same formula: thick, extremely pigmented, and opaque in one swipe, with a semi-matte finish that sets to matte after an hour or two. The combination of thick formula and high pigmentation means that although Rei of Light will transfer onto cups and forks, there will still be a lot of color left on your lips after a drink or snack. Today I had an iced coffee and a small salad and my lipstick looked perfect (though I can't guarantee that it would have looked perfect had a burrito been involved). I hate to get all YouTube-guru on you, but THAT PIGMENTATION: 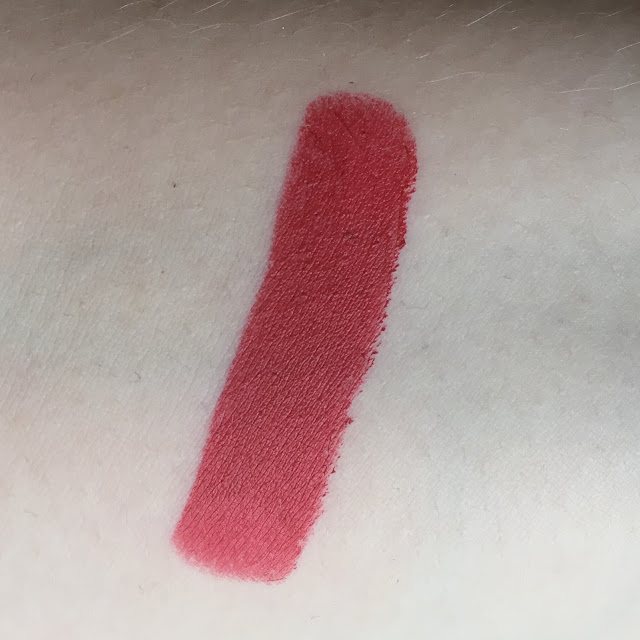 Here I've swatched Rei of Light alongside a neutral red, a red-orange, a brick red, and a warm brown. Check out the difference in opacity!


Of the four other lipsticks above, Rei of Light is closest to NYX Alabama, but Alabama leans noticeably cooler. Like other grungy hybrid shades (Revlon Sultry, NARS 413 BLKR), Rei of Light looks different depending on lighting—appropriate, given its name. Sometimes it looks brick red, sometimes coral, sometimes the rusty orange I want it to be. I think that's part of my ambivalence: 2/3 of the time, it's not the color I bought it for. But it's beautiful 100% of the time, so I think I'll live.

Despite being on the heavy side, Rei of Light is comfortable to wear. I do find, though, that the formula becomes slightly drying after the shine wears off. I had this problem with the NARS Audacious formula too, but so far the Le Marc formula doesn't seem as bad. I'll update this post if I change my mind.

I wore Rei of Light today, but since this nightmarish heat wave has yet to break (the heat index hit 100°F this afternoon), I went light on the rest of my makeup. As always, I'm wearing Glossier Boy Brow in Brown and NARS Radiant Creamy Concealer in Vanilla. On my eyes, I've got Maybelline Bad to the Bronze (the only eyeshadow I own that truly stands up to this humidity), Urban Decay 24/7 eyeliner in Demolition, and Revlon Volume + Length mascara. My blush is actually an eyeshadow: ColourPop Super Shock Shadow in Shop, a rusty coral that works perfectly on my cheeks. No highlighter: that's my natural, uh, glow. 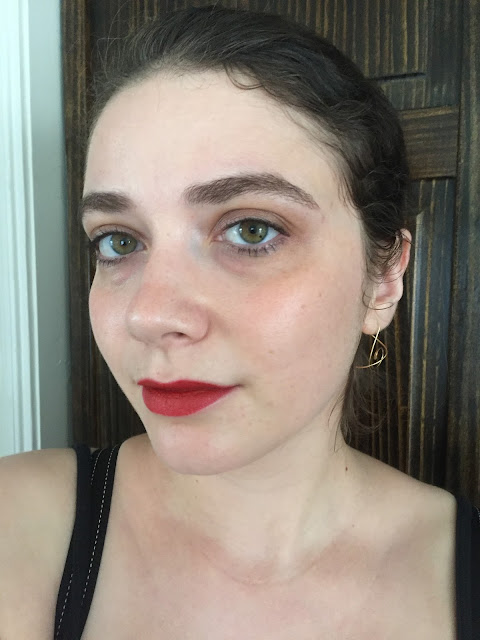 A better view of Shop—I'm geekily excited to have repurposed it this way, especially because it's not easy to find a rusty orange blush: 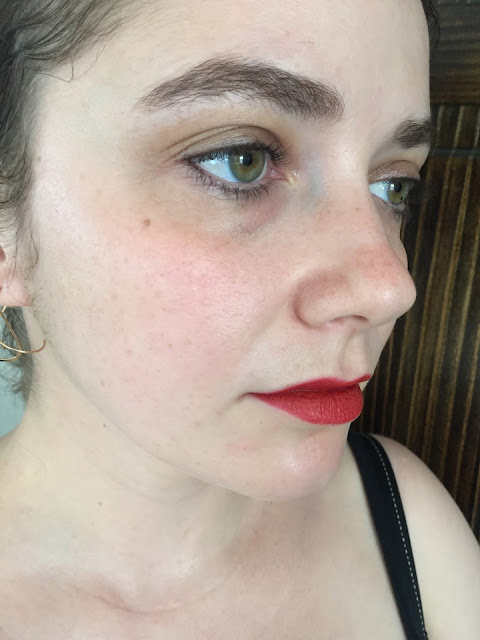 Outside on campus; the day was slightly overcast. I promise I'm deluging you with selfies not for vanity's sake (well, not only), but for the sake of capturing Rei of Light's dramatic color shifts. 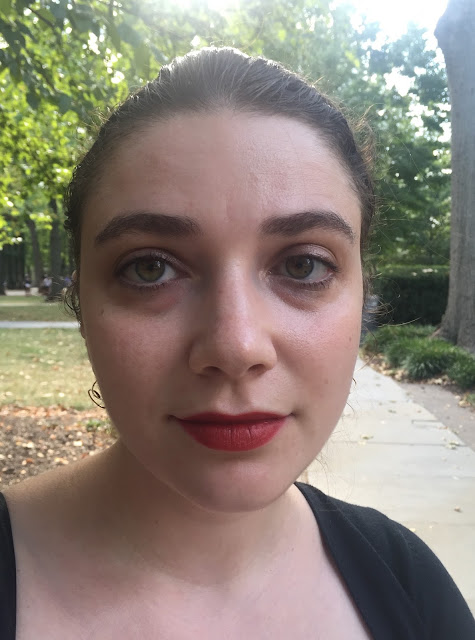 Finally, an indoor-lighting photo from last month. Here I am wearing a matching Goorin Bros. hat (which I regret not buying, tbh) at the Coit Tower gift shop: 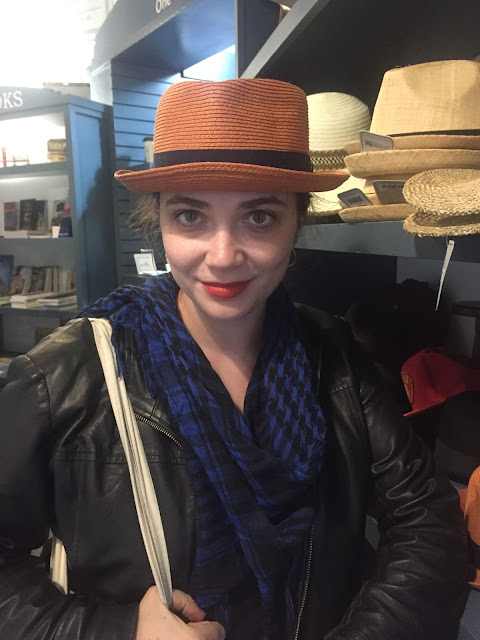 I'm still on the fence about keeping Rei of Light, because of the drying effect when I wear it too long, and because it's not quite my ideal burnt orange. (Neither is Essie Playing Koi, for the record: it's darker and browner than it appears in the bottle.) I suppose this is a lesson in the dangers of hunting for the perfect iteration of a given color. It's mentally exhausting, and it leaves you dissatisfied with excellent products that don't correspond exactly to the image in your head. Maybe that's a manifestation of class anxiety, too: I don't feel justified in spending X amount of money unless the product is flawless in every way, even though I know rationally that nothing is flawless.

Does your upbringing influence how you approach and consume makeup? I'm curious about other people's experiences!

Posted by auxiliary beauty at 6:14 PM