Hey there! Just a quick review to prove to you that I haven't quit blogging, and to prove to myself that there's more to life than watching American democracy go down the toilet while I revise my dissertation abstract for the dozenth time. Today we'll look at a product I've been using and enjoying for almost three months: Kiko Long Lasting Stick Eyeshadow in 36 Golden Mauve. 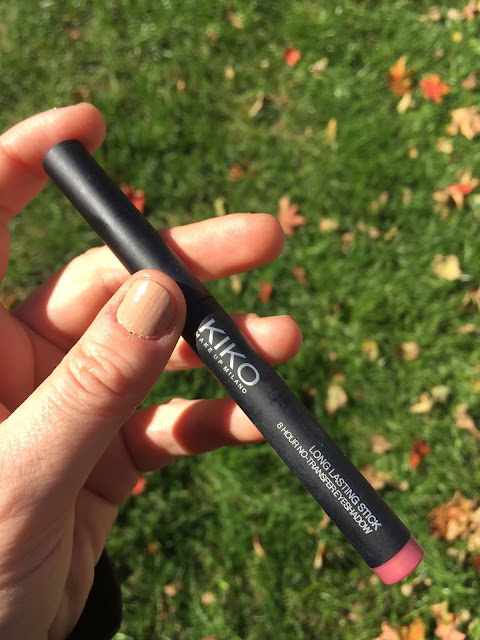 I bought Golden Mauve back in June at the new Kiko store in Birmingham, along with two powder eyeshadows that I have yet to wear. The stick eyeshadows were all on sale, so I assumed they were being discontinued, but they're still on Kiko's website at their original price of £6.90. I certainly hope they're here to stay, because they're fantastic products that have received almost universally positive reviews. One of the less-than-positive reviews is mine, actually: the first Kiko stick eyeshadow I tried was 16 Purple (pardon the ultra-LQ photos in that post), a shimmery dark purple that was patchy and hard to blend. I must have chosen the worst shade in the line, because all the other shades I've swatched have gone on smoothly and evenly, and Golden Mauve is no exception. 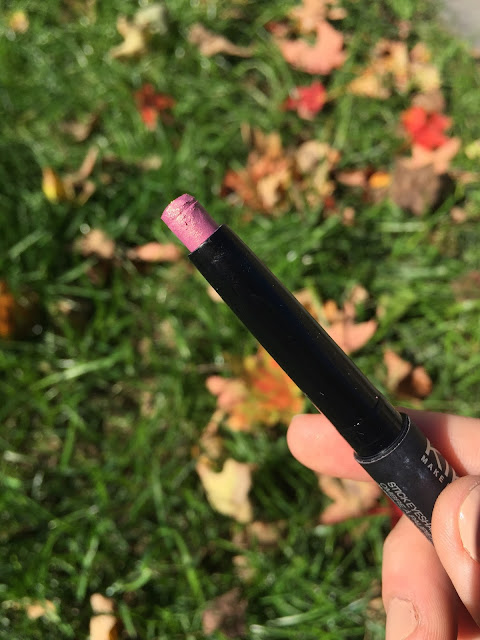 Kiko's stick eyeshadows are cream shadows with finishes ranging from pearl to full-on sparkle. The packaging is a black twist-up tube with a cap that snaps on tightly and a colored end-piece (sorry, I don't know what to call it) indicating the shade. I've found just one flaw in Golden Mauve's packaging: when I twist the product back down, some of the shadow sticks to the walls of the tube. That doesn't interfere with performance, but it does mean that the stick looks a bit sloppy in the photo above.

Kiko promises 8-hour wear and "no transfer" for the stick eyeshadows. If anything, I'd say they're being too modest. This stuff stays. It goes on very creamy—I like to apply it to my finger and smear it across my mobile lid, then blend out the crease with powder shadow—but it sets fully in a couple of minutes. Cream eyeshadows are great for eyelids with as many creases as mine: in general, they're more forgiving and easier to blend than powders. Golden Mauve is packed with gold glitter, but I don't notice much fallout at the end of the day. I can spot some stray glitter if I really scrutinize my undereye area, but it's not strewn across my cheeks or anything. I've tried Golden Mauve with and without primer but haven't noticed much difference in performance, which I think is usual for cream formulas.

"Golden Mauve" is a peculiar name, and the shade itself is a shifty one. The base color is a purply-pinky mauve that looks decidedly cool-toned in the tube, but all that gold sparkle transforms the shadow into a warm rose gold on my lids. Here it is hand-swatched outside, in indirect (left) and direct sunlight: 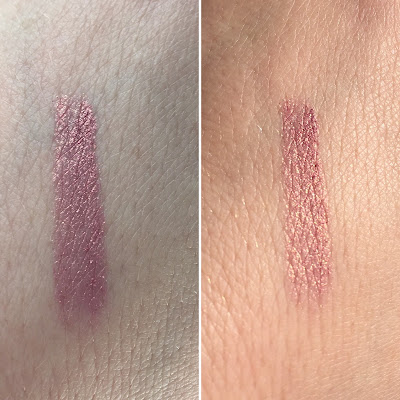 Left to right: Golden Mauve, Seventeen Statuesque, Maybelline Pomegranate Punk. I didn't get home before sunset today, so I had to take this photo in artificial light. I'll add a photo in natural light tomorrow, if I get a chance: 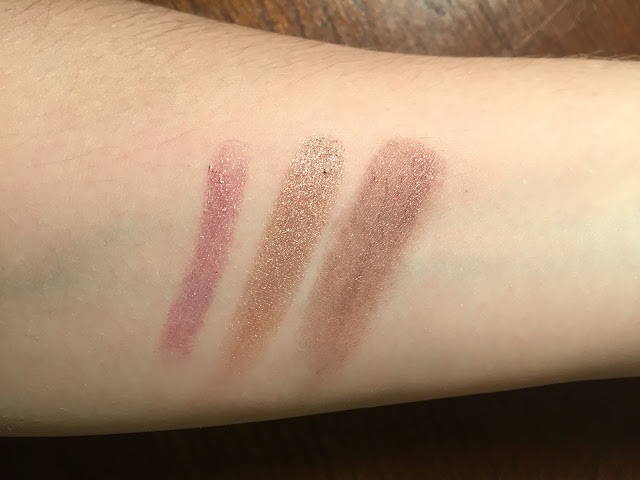 Update: Same order, in daylight. That's two swipes of Pomegranate Punk and one each of the other two: 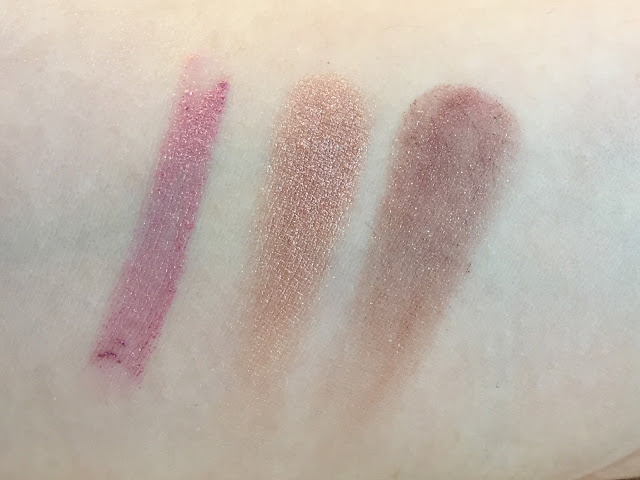 Blended out on my lids, Golden Mauve and Pomegranate Punk don't look quite as different as they do above. However, I find myself using Pomegranate Punk for more "dramatic" looks and Golden Mauve for more "professional" ones (both adjectives in scare quotes because I'm too cowardly for truly dramatic eye looks and I'm not a real professional). Today I wore Golden Mauve with theBalm Sexy, a matte burgundy, in the crease and outer V, and Urban Decay 24/7 eyeliner in Demolition on my lashlines:

I was meeting with my advisor this morning to discuss my job materials, and I told myself that if I spent more time than usual on my eye makeup, I'd be less likely to let myself cry. It worked, and now I can still say that I have yet to cry in front of any of my grad-school professors (undergrad professors, on the other hand...). I also wore Sleek Flushed on my cheeks and Milani Matte Naked on my lips for an overall berry-nude autumnal ~color story~. 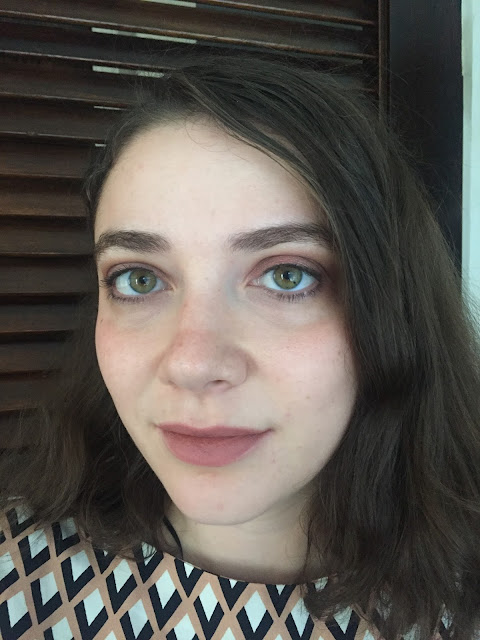 As glittery as Golden Mauve is, I don't feel particularly showy or dressed-up when I wear it. The base color is neutral enough that the glitter is just like "who, me?" 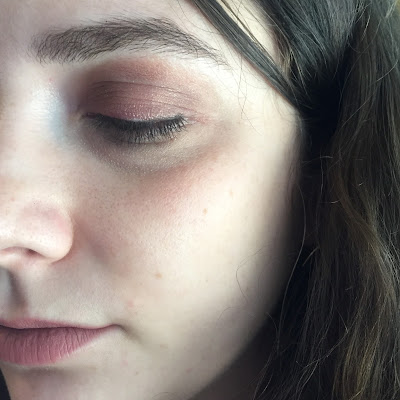 By the way, thanks to everyone who gave me such helpful advice in the comments of my last post! I ordered Paula's Choice Skin Perfecting 2% BHA Liquid Exfoliant from Dermstore, and I'm liking it so far (not that I can deliver much of a verdict, having used it just once).
Posted by auxiliary beauty at 10:52 PM