...instead of, you know, her opponent's total disdain for the democratic process.

The third (and, blessedly, last) presidential debate of 2016 took place last night at the University of Nevada-Las Vegas. I'm not going to discuss the content of the debate because 1) it's pretty obvious which candidate I support and 2) this is a beauty blog, not a political blog. But the personal is political, as feminists of the '90s were fond of reminding us, and sometimes makeup is political too. Donald Trump's bizarre orange bronzer has been discussed ad nauseam, but Hillary Clinton's makeup made relatively little impression on the public until last night, when she took the stage wearing a space-age white pantsuit and a bold berry-red lipstick:


This struck me as a marked departure from her makeup in the first two debates. But when I went back and looked at her previous lipstick choices, I realized I was wrong: she's never favored neutral lipstick. Here's how she looked in the first debate, at Hofstra University: 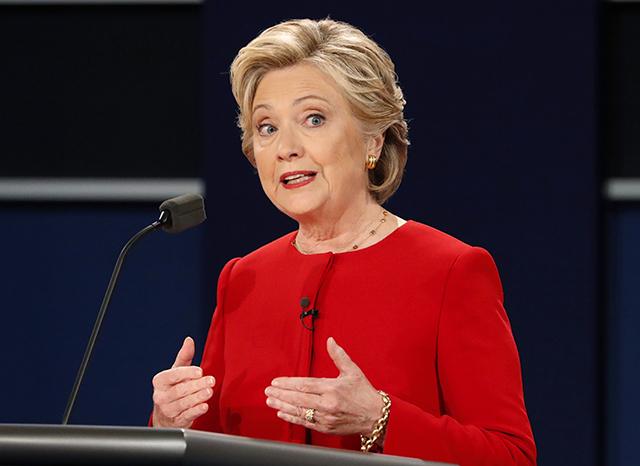 You'd think she would have chosen a nude or neutral lipstick, something that wouldn't threaten to compete with that brilliant red pantsuit, but she went with a more toned-down red lip. I'm honestly not a fan of this choice: the slightly brownish red on her mouth clashes with the bright neutral crimson of her pantsuit. Then again, it's telling that I remembered her lipstick as neutral: the pantsuit was SO bright that it drowned out the color on her face, meaning the lipstick was functionally neutral. Interesting.

In the second debate, at Washington University in St. Louis, Hillary wore an '80s-tastic navy pantsuit with white lapels over a white top. Her lipstick was less bold than it had been in the first debate, but it wasn't quite neutral, either. If you can ignore the silverback gorilla (Nigel Farage's approving words, not mine) looming over her shoulder, you'll notice that she went with a peach lipstick. Peach is one of my favorite makeup colors to pair with a navy top, so I approve. I think this was the most flattering of her three debate ensembles, color-wise. 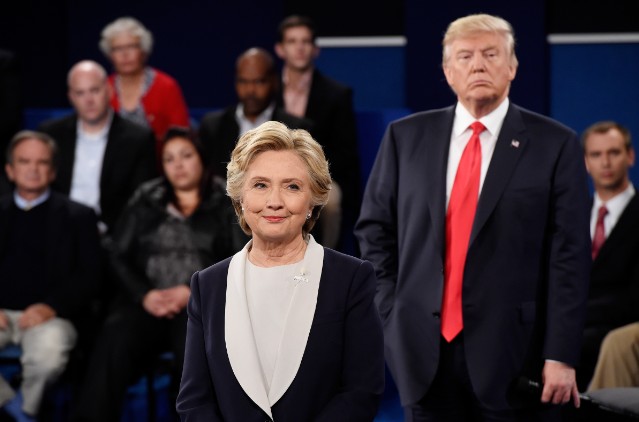 In last night's debate, Hillary's makeup came to the fore because her pantsuit was pure white: any non-nude lipstick she'd paired with that color would have popped. (Yes, her pantsuit color choices were red, white, and blue. Subtle.) Here's another screenshot I took: 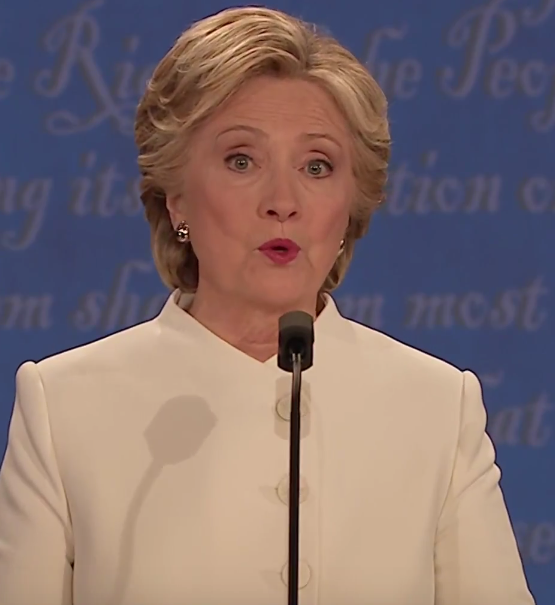 I'll be honest, I'm not a fan of the rest of her makeup (or her mullety hairdo, for that matter). She's wearing the harsh black eyeliner that many women of her generation, my mother included, adopted at the age of 16 and never gave up. If you look closely, you can see that the eyeliner on her lower lashline doesn't connect—isn't even close to connecting—with the eyeliner on her upper lashline. I think a brown eyeliner and/or some brown shadow would have looked more flattering and less dated. The peachy blush isn't working for me either: it's not bad with her complexion, but it doesn't harmonize with the berry lipstick. And is that some Trumpesque bronzer I spy? Hillary, hire me as your makeup adviser and I'll hook you up with a pan of Urban Decay Rapture. 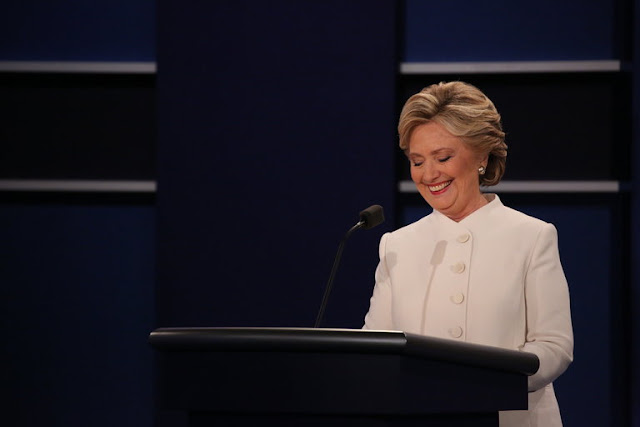 Kate at More Like Space has done a great color analysis of both presidential candidates and concluded that they belong to the cool, muted summer season. Clinton is a light summer and Trump, bronzer addiction aside, is a true summer: "everything that trump is doing to himself, from the orangey fake tan to the too-bold power suits is precisely the opposite of what would work. i'm sure he thinks that blues and greys are much too wimpy and beta-male for him, but, even if you factor in his aging, i fully believe he'd be more presidential in that palette than the one he's chosen." As a woman, Clinton has a bit more leeway with her color choices, and I don't think she and her stylists have done too badly in recent months. Her first debate pantsuit wasn't her best color, but it was such a powerful, fuck-you color that it really didn't matter.

Britain's new prime minister, Theresa May, has long been mocked for daring to put effort into her appearance: her shoes, necklines, and skirt hems have all come under scrutiny. Regardless of what I think of her politics (not much), I can't help but admire her refusal to tamp down her femininity. Until last night, I would have said that Hillary Clinton has taken a very different approach to the daunting business of being a female politician. But that striking berry lipstick strikes me as a sign that she's ready to bring some levity to the job. Any guesses on the color and brand? I'm thinking Bobbi Brown.
Posted by auxiliary beauty at 11:08 AM