Well, the impossible has happened. A racist, misogynist sociopath with nothing but contempt for the democratic process has been elevated by it to the most powerful office in the world. Hillary Clinton was not my ideal Democratic candidate, but I came to find her deeply inspiring over the course of this year's vicious, depressing campaign. And now millions of Americans have rejected her knowledge, experience, and tremendous ability for the whims of a con artist loyal only to himself. As a queer woman and someone who has endured sexual harassment from men in positions of power, I can't help but feel that Tuesday's election was a referendum on my humanity. And I'm not even one of the people threatened most by a Trump presidency; it's a sign of my privilege that I can still cling to optimism. I can only hope that this disaster will shake the Democratic Party out of its complacency and force it to listen to the progressive voices in its ranks. I can only hope that more and more of us will fight for social and economic justice. But with the Republicans poised to dominate all three branches of American government, it's going to be a long four (and possibly eight) years—and the effects of the legislation passed in those years will last much, much longer.

So, uh, what makeup do you put on your face when your country is teetering on the edge of the abyss? Even in dark times, there's value in moving forward with our daily lives and daily rituals. I can't have been the only person craving a sense of normalcy after the fever dream of election night. The next day, I automatically reached for my favorite lipstick: NARS 413 BLKR, which I hadn't worn in a few weeks. There was something comforting about applying that familiar red-brown-plum color and feeling its familiar dryness on my lips. I wore that lipstick for two days, along with neutral, understated eye makeup. Today, though, I woke up wanting something a little more colorful. I almost never wear non-neutral shades on both my eyes and my lips, but this morning it felt right.


And this was the result: 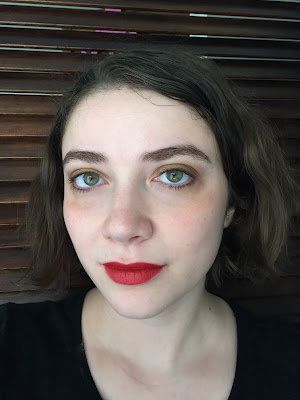 As you can probably see, ColourPop Might Be highlighter (at the tops of my cheekbones) is too warm and dark for my complexion: it looks positively yellow here, though it's a rosy copper in the pan. More on that in a future review. I can't return it, so I'm trying to make the best of it. 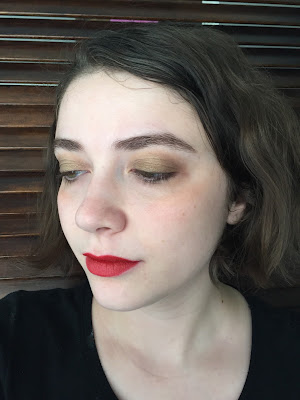 I always forget about my Inglot eyeshadow duo for some reason, but that antique gold-green, #433, is perfect for autumn. It also goes with the earrings I bought last month at the Philadelphia Museum of Art: 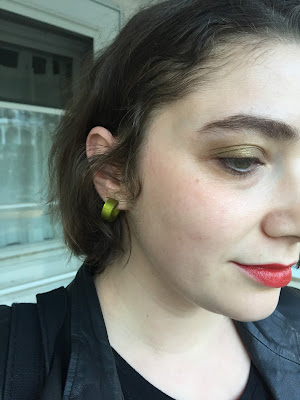 Those earrings are a souvenir not just of the museum but also of a wonderful visit with two dear friends. And in the wake of this election, our friendships and connections with other women are more important than ever. I don't know where we go from here. But we're still here. Still nasty. This is not the end.
Posted by auxiliary beauty at 6:35 PM