It turns out that I have time for one more post before I head to New York tomorrow! A lot of new products entered my life in October, and though some of them were gifts, some were...definitely not. It's not exactly shocking that I bought more stuff than usual last month. October tends to be hard for me mental-health-wise, and I was applying for jobs for the second year in a row, and I couldn't help but keep up with upsetting election bullshit. And my neighbors' cat, whom I'd known for three years, died two weeks ago. Mr. B was the sweetest, friendliest cat I've ever met, and he used to come over so often that I almost thought of him as my cat. So October was a stressful month, and I'm not going to beat myself up for going a little over budget, though I will make some new resolutions at the end of this post. After all, I have more stressful months ahead of me, and the whole point of this low-buy is to learn how to manage stress without spending impulsively or irresponsibly.

I have a lot to cover, so let's get into it:

I bought NYX Cabaret to wear under Kat Von D Mercy, a glittery reddish berry that looks a bit patchy without liner. I had a $5 CVS coupon and knew from irritating experience that I couldn't use it on anything under $5, so I picked up Covet, a matte khaki green, as well. Covet is a lot better than I expected (especially given my terrible experience with NYX's Hot Singles shadows), but I wish I'd chosen another color. Floss Gloss Donatella was another impulse buy, from a little shop in Brooklyn. After my disappointment with Essie Playing Koi, I hoped that Donatella would be the pumpkin polish of my dreams—and it was, until it chipped FIVE HOURS after application. I'm not talking about some minor tip wear; I'm talking about this: 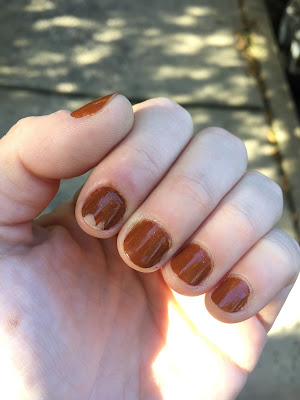 WTF? I didn't know nail polish was capable of chipping like this. I don't think I have the receipt anymore, either. I made a lot of regrettable purchases this month (Black Lace Rabbit chief among them), and I'm starting to wonder if I've lost my instinct for which products will be semi-decent. I do like my two new products from ColourPop, though: Might Be is an intensely pigmented copper highlighter that looks more like a bronzer on my fair, cool skin, and Fast Lane is a dark teal pencil eyeliner. I originally categorized Urban Decay Whiskey as a replacement because I bought it when I thought I was running low on Demolition, but it turns out that I have almost half of Demolition left! So I'm counting Whiskey as a new makeup product to remind myself that I can't be cavalier about "replacing" items that aren't gone yet.

Here's my soft-witch look for Halloween, using Rosy Brown on my eyes, Might Be (and no blush) on my cheeks, and NYX Liquid Suede in Stone Fox on my lips. I wore this to the library to work on job applications because I'm lamer than you. 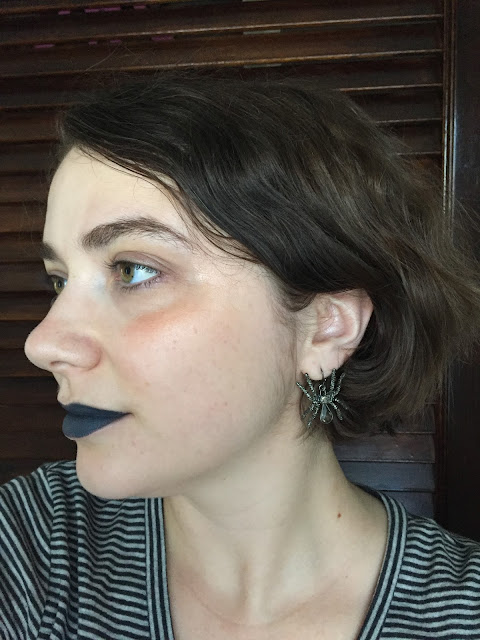 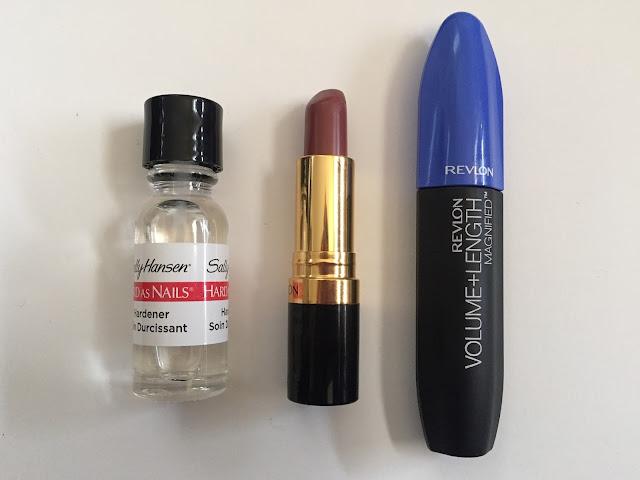 I swear Hard as Nails is usually more expensive than that, but the iPhone note in which I keep a running tab of my makeup purchases tells me I paid $4, so I guess I used a coupon or something? I feel bad that quite a few of my staples aren't cruelty-free (though Revlon is no longer selling in China), but yo, it's hard to find affordable, effective, cruelty-free base coat and mascara. Let me know if you have any suggestions! 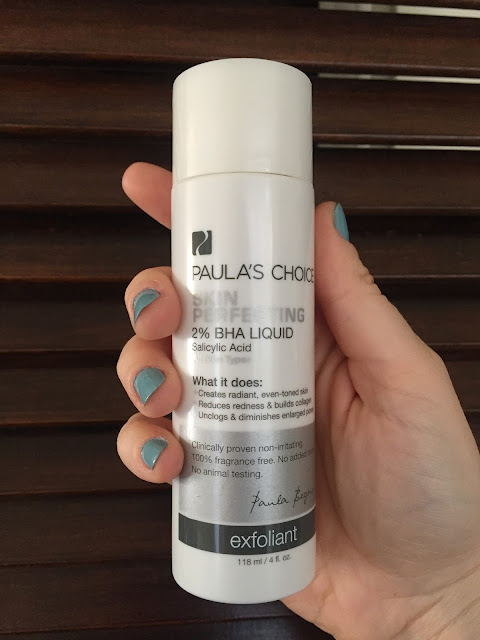 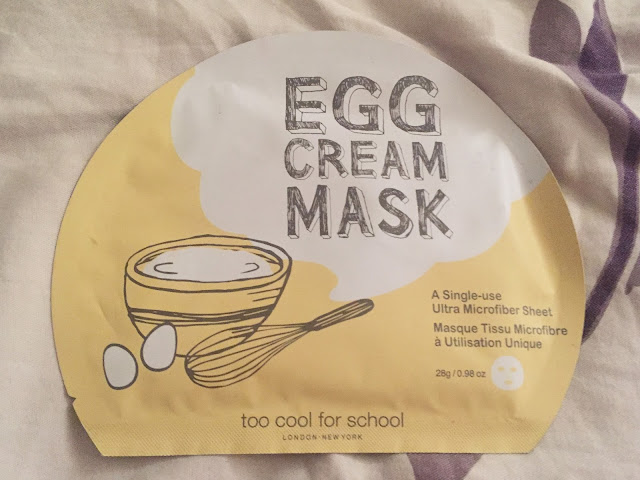 Thank you to everyone who recommended I try a chemical exfoliant! The Paula's Choice BHA liquid has been praised highly all over the internet, and I was lucky enough to get it for 20% off from Dermstore. I've been using it every two or three nights: I dab it all over my face with a cotton pad, let it sit for 20 minutes (it starts feeling tacky about 10 minutes in), and then apply my CeraVe PM moisturizer. I haven't been using the BHA liquid long enough to say definitively that it's made a change, but my pores do look smaller the next day. I haven't suffered any truly negative effects, but the top of my nose is prone to dryness and peeling, and the exfoliant does exacerbate that a bit. 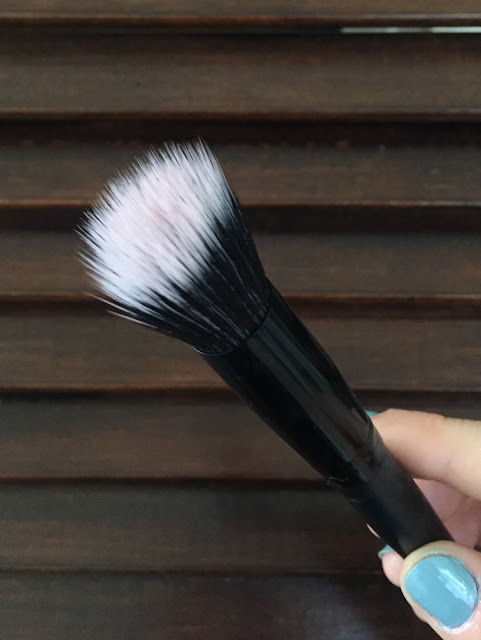 I bought this to diffuse ColourPop Might Be across my cheekbones, but the highlighter's moussey, spongy consistency prevents it from sticking to synthetic bristles. So I've been using the brush for blush, and it's working well. I like how soft it is. 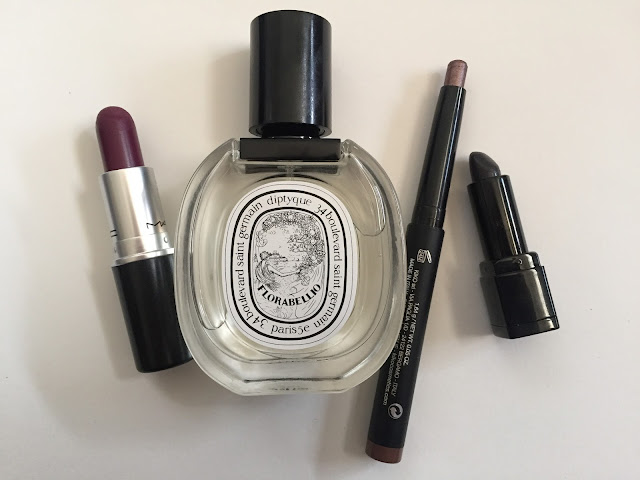 My roommate is subletting her room for the year, and she asked me to send her some books and papers she left here. She reimbursed me the shipping money and offered me a lipstick of my choice, which was so sweet. It's kind of unbelievable to me that I didn't have Rebel already: that dark berry-fuchsia is one of my most flattering colors, and Satin is my second-favorite MAC lipstick formula.

Diptyque Florabellio and Kiko Rosy Brown were birthday gifts from my lovely boyfriend. We aren't big on surprises, so we just tell each other what we want for our birthdays—why not get your partner something you know they'll like? I'd been wearing samples of Florabellio for months, eking out each one as long as possible, and felt ready to commit to the full-sized bottle. My boyfriend is a Tam Dao man himself, so now we're an insufferable Diptyque Couple. I'll try to write a review of Florabellio eventually, though I'm not sure I can make my thoughts on perfume coherent to anyone else. But what's the fun of writing if you don't set yourself some challenges, right? I'd wanted to buy Rosy Brown when I visited the Kiko store in Birmingham in June, but the shade had been out of stock. I love Kiko's cream shadow sticks for short overnight trips when I don't feel like fussing with brushes and powder shadows.

I got Noir Révélateur as a 100-point perk when I bought Whiskey at Sephora (man, now I wish Sephora sold actual booze). And yes, I know I still have to write that sequel to my Black Lace Rabbit post. Soon, I promise! In the meantime, have some swatches. You'll notice that Noir Révélateur, despite its name, is actually a sheer plum. I'm not crazy about it: the finish is very shiny and the floral scent is overpowering. At least it was free.

I'm actually feeling a little overwhelmed by all the pretty new things I've accumulated since the summer. And I'm supposed to be on a low-buy! This is embarrassing. I'm going to limit myself to just two new products in November (plus my Sephora birthday gift, of course). AND I'm declaring a lipstick no-buy for the rest of 2016. I know my mom has sent me at least one lipstick for my birthday, and I have so many other new ones that deserve attention. I haven't even reviewed all the lipsticks I've bought this fall! I also need to save money for interview clothes and other necessities, so the less I spend on makeup the better.

I did make one good decision in October: I consciously put more effort into my friendships. One of the hardest things about being a grad student at my university is the lack of a sense of community. The town is tiny and expensive, and affordable housing that isn't literally someone's basement is hard to find, so most of the friends I've made here have moved elsewhere. Last month I visited a college friend in New York and two grad school friends in Philadelphia, and it was nice to get a change of scene and remind myself that I have some truly great people in my life. Experiences and relationships are better antidotes to depression than new lipstick: who knew?

Zoya Troy ($10): I have nothing like this dirty silver shimmer. Ugh, so pretty: 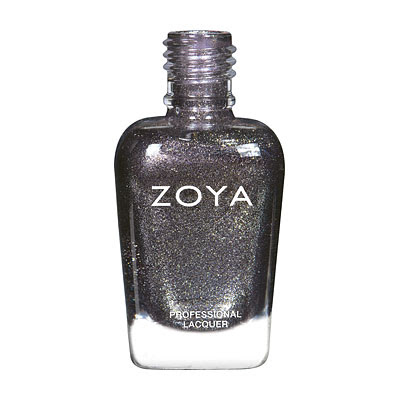 Mustard or yellow-brown eyeshadow: Basically, I want a dupe for Mustard from Lime Crime's Venus 2 palette, but it's surprisingly hard to find a mustard-yellow eyeshadow single. I'm thinking of ordering Desert Sands from Makeup Geek, though it's not quite as yellow as I'd like: 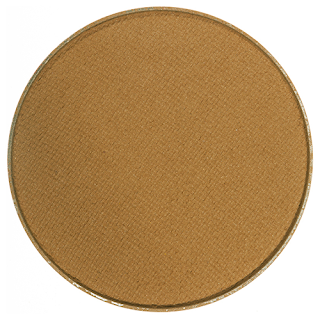 And that's it, which is just as well. I don't feel an urgent need for anything new right now, but I know myself too well to assume that I'll never feel that need again. In the meantime, I'll experiment more with the makeup I already have, because it's high time I tried some new looks. And I'll get to work on that backlog of reviews. Promise.
Posted by auxiliary beauty at 7:22 PM