After my disappointing experience with Lipstick Queen Black Lace Rabbit, I probably should have given up on finding my ideal sheer black lipstick. But I'm nothing if not perverse, so while I was in New York last month, I popped into the Upper West Side Sephora to do some fieldwork.

The first sheer black I swatched was Turn Down ($22), one of the two "Lip Flip Shade Transformers" in Estée Lauder's new Estée Edit (for The Youth). The other "transformer" is a more unusual shade: Turn Up, a sheer yellow. Turn Down was much more pigmented than Black Lace Rabbit; it was also the only sheer black I found that wasn't extremely shiny. I wish I'd thought to swatch it over another lipstick, because I have a hard time imagining how it would "transform" a color without blotting it out or making it muddy. I also wish I'd taken a photo of the lovely metallic blue tube. 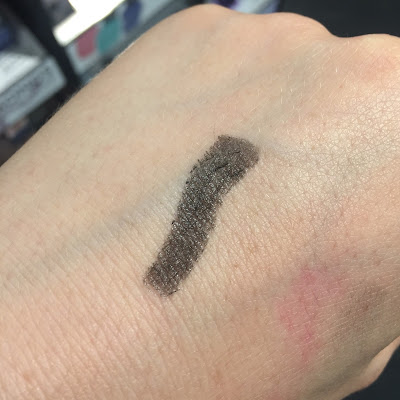 My next quarry was Urban Decay Oil Slick, part of the Vintage Vice collection released for Urban Decay's 20th birthday this year. Here I've swatched Oil Slick next to another color from 1996: Asphyxia, an iridescent lavender with a blue shift. Given the photos I've seen online, I have a feeling that Oil Slick is less clumpy when it's not being swatched from an abused Sephora bullet: 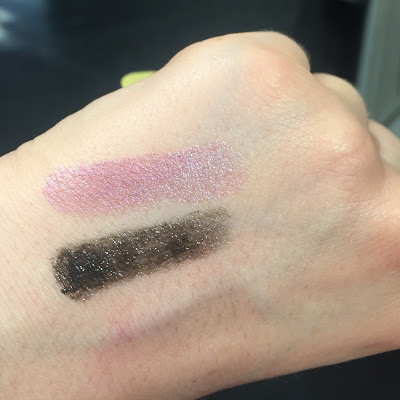 Oil Slick from a different angle: 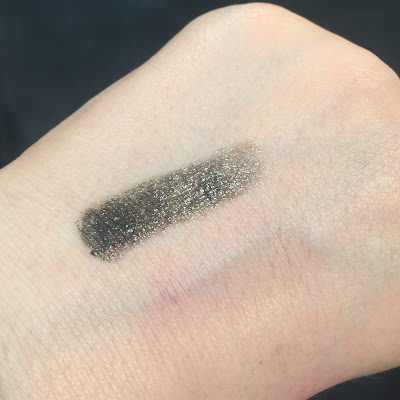 Like Turn Down, Oil Slick is more pigmented than Black Lace Rabbit; it's also packed with silver shimmer that's as evident on the lips as in a hand swatch. Yes, I had to try it on... 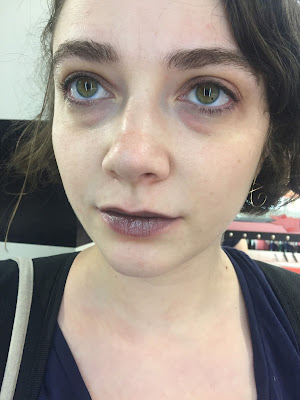 ...and it made me look pretty rough (or maybe that was the Sephora lighting). Of all the sheer black lipsticks I tried, though, Oil Slick was the one that came closest to working well on its own. I think this was due to the large amount of shimmer, which made the black base look deliberately sheer instead of worn away from opaque.


When I went to pay for my two sheet masks and my Urban Decay 24/7 eyeliner in Whiskey, I was offered yet another sheer black lipstick as a 100-point perk: a deluxe sample of Givenchy Rouge Interdit in Noir Révélateur. Needless to say, I accepted. Believe it or not, this was the first time I ever got a lip product as a 100-point perk (maybe I should stop visiting this particular Sephora). The mini Noir Révélateur is a decent replica of the full-sized version, complete with a cute silver ribbon: 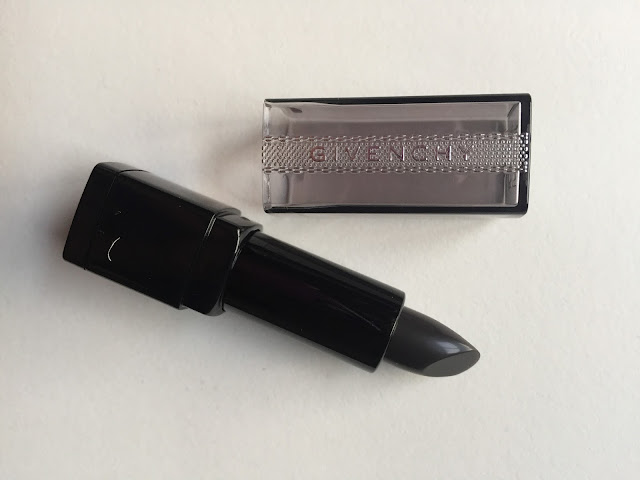 I know next to nothing about Givenchy's makeup, but some cursory research on the Sephora site (the difficulties I endure for this blog...) reveals that Givenchy has three lipstick lines: the opaque Le Rouge ($36); the sheer Le Rouge-À-Porter ($36); and Rouge Interdit ($33), billed as a "color-enhancing lipstick" with a "high shine finish." Noir Révélateur is basically an expensive mood lipstick that interacts with your personal pH or whatever (not sure if the other Rouge Interdits have the same property). How Givenchy gets away with charging $33 for this gimmick I have no idea, but at least I didn't have to drop $33 for the privilege of trying it.

Here's Noir Révélateur swatched on my arm, with one pass at left and four or five at right. As you can see, it swatches as a grayish plum instead of a true gray or black: 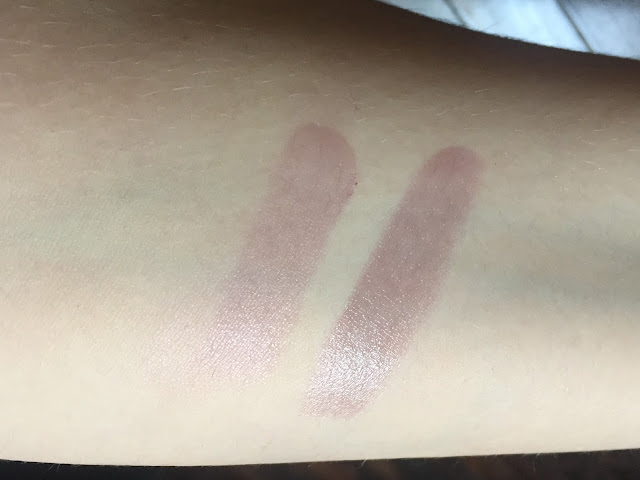 But swatching this lipstick on your arm won't reveal a whole lot about how it will behave on your lips, unless your arms and lips are the same color. It turns out that Noir Révélateur leaves a sheer gray-plum cast on my lips for about a minute, after which the color warms up to a berry pink. In the triptych below, you can see my bare lips at the top, followed by Noir Révélateur immediately after application (middle) and after five minutes (bottom): 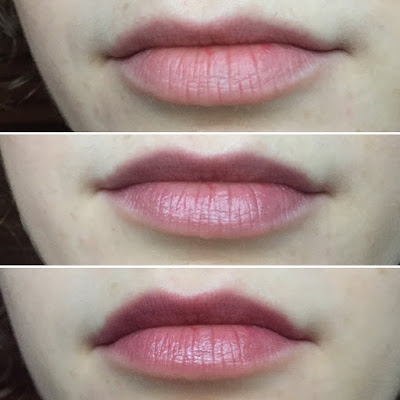 Unlike most sheer black lipsticks, Noir Révélateur isn't marketed as a transformer or topper for other lip colors, but I tried it over two other lipsticks out of curiosity. Because of its sheer, slippery formula, it doesn't do much more than move the base color around. It's especially ineffective over lipsticks that are already somewhat dark, like MAC Rebel. Here's Rebel on its own (top) and under Noir Révélateur: 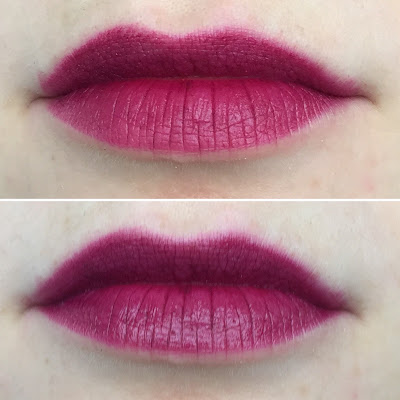 NR makes Rebel darker and more purple, but also patchier and more feathery. The amount of slip in the Givenchy formula makes any lipstick under it slippery, too. It did slightly better over a matte nude, Milani Matte Naked: 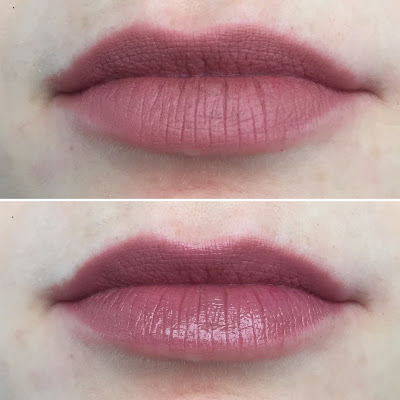 I actually like the effect of NR over Matte Naked: my lips look plumper and less parched in the second photo, and the sheer black adds a plummy cast to the pinkish beige base. Here's the Givenchy/Milani combo in context, with Kiko Rosy Brown eyeshadow, Urban Decay Whiskey eyeliner, Urban Decay Rapture blush, and a rather grim expression because FUCK this election is stressing me out: 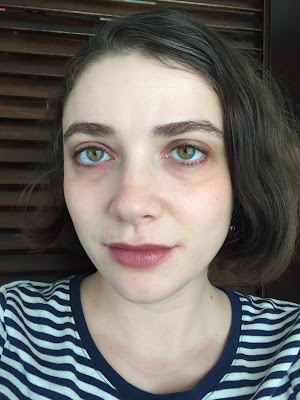 I'm glad I got a chance to try this lipstick for free, but I wouldn't be tempted to purchase the full size even at a more reasonable price point, because of one glaring flaw: the overpowering floral scent and taste. I don't know what it is about fancy Frawnch beauty brands, but their lipsticks always seem to be nauseatingly pungent. I don't mind YSL's wine-and-roses scent, but the Givenchy makes me feel like I've just eaten the bowl of potpourri on someone's toilet. I'm also not a sheer-lipstick person in general, and this lipstick reinforces all my prejudices: it feels too slippery, it doesn't change my natural lip color all that perceptibly, and it decreases the longevity of any lip color it's layered over. So, meh. At least it doesn't dry out my lips, which many sheer lipsticks do.

And so ends my experiment with sheer black lipstick, at least for now. I'm left with the suspicion that unless a sheer black has a good amount of shimmer, its sheerness will look less like a deliberate style choice than the result of an encounter with a Mission-style burrito. Beauty brands, feel free to prove me wrong.
Posted by auxiliary beauty at 7:11 PM