The annual Academic Job Conference of Doom fast approaches (this is my second year preparing for it), and yesterday I had a dress-rehearsal practice interview with my advisor and another professor. This gave me an opportunity to test my interview makeup as well as my answers to questions like "But Machiavelli and Polydore Vergil are very different historians; why did you mention them in the same sentence?" I've written before about makeup in academia, and I still think there's a widespread prejudice against women who put obvious effort into their appearance. I know about the studies showing that women who wear neutral makeup come off as more competent in the workplace than women who wear no makeup at all, but I'm not sure that rule applies in academia, where both men and women often assume a negative correlation between femininity and intellectual seriousness.

But I also don't see the point in angsting over this until I get a job, you know? This isn't exactly the hill I want to die on, at least not yet. The job market in the humanities is horrible and I'd like to maximize my chances of making a living wage next year, thx. I'm not going to show up barefaced to an interview, but I'm not going to wear purple lipstick and my most metallic highlighter, either. I actually enjoy the challenge of making myself up for a specific role: in this case, the role of unimpeachably professional and competent young scholar. When putting on my job-market game face, I have three major concerns:
For yesterday's look, I used my everyday base makeup, eyebrow goo, and mascara, plus this color makeup:


After putting down a layer of Urban Decay Primer Potion, I applied Seventeen Statuesque to the inner 2/3 of my upper lids and Urban Decay Primal to the outer third, then blended Urban Decay Cover into the crease, up to the browbone, and along the lower lashline, and tightlined with UD Whiskey eyeliner. I applied a very small amount of ColourPop Lunch Money highlighter, but might not use it at all for the actual interview. My interview lipstick last year was Urban Decay Revolution Lipstick in Rapture, but this year I went for Revlon Matte Balm in Sultry, which is more matte (hence longer-lasting) and a bit darker. The final look wasn't much different from my usual makeup, honestly: 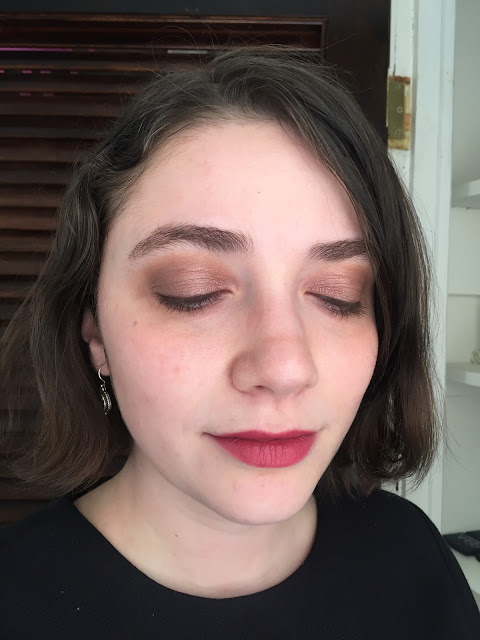 I was happy with how this turned out (less happy with my performance at the practice interview, but I guess that's why you practice), but let me know if you have any suggestions!

Also! My boyfriend's parents were kind enough to give me a $35 Sephora gift card as a holiday present. I'm thinking of using it toward the Anastasia Beverly Hills Modern Renaissance palette, which I've been coveting on and off for months, but I'm not sure I can trust myself to use a 14-shadow palette when most of my eye "looks" feature one or two shadows. And I worry that the color scheme might be too warm for my complexion and/or go out of style within a year. Thoughts?
Posted by auxiliary beauty at 7:31 PM