Surfacing briefly from the dissertation abyss to give you my November update! I'm proud to say that I made only one beauty order on Black Friday—I bought some new clothes that I really needed, so I couldn't justify splurging on makeup too. And November was my birthday month, so I received a few makeup gifts, including a lipstick I'd wanted for a while. But I did yield to temptation a few times, and here are the results:

NYX recently released a bunch of lip liners that match their Liquid Suede lipsticks. Since my mom sent me the Liquid Suede in Brooklyn Thorn for my birthday (more on that later), I picked up the matching liner, though I really bought it to use with two other lipsticks: NYX Up the Bass, a gray-purple, and Topshop Boardroom, a greige, both of which apply patchily and fade quickly. The Suede Matte liners are (obviously) more matte than NYX's original lip liners, but that makes them harder to use. I'm going to write a review of the Brooklyn Thorn Liquid Suede and liner soon, but I should note that they're not actually the same color: the liner is lighter and warmer than the lipstick.

Let's Play is a lipstick from ColourPop's freaking ADORABLE Hello Kitty collection. I'm proud of myself for buying just one item, though there weren't many shades that appealed to me: the lip products were all red, pink, and nude, and the eyeshadows and blushes didn't look like anything special. Let's Play is a pinkish red with matching sparkles, but it's not so glittery that you can't wear it outside a drunken end-of-semester holiday party.


I found Nice Guise at the supermarket where my boyfriend and I were stocking up on food and drink for election night, back when there was a good chance that an overgrown toddler in a Cheeto suit wouldn't become president. Since Nice Guise was a sparkly Democratic blue, I bought it as a special election-day polish—and I haven't been able to wear it since. Which is a shame, because it's gorgeous: 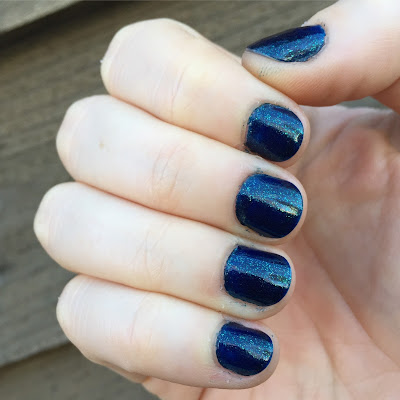 Maybe in a month or two it will no longer be the polish of shattered dreams for me. We'll see.

Finally, I took advantage of Zoya's amazing Black Friday sale: 70% off the entire website! Zoya is my favorite nail polish brand, and their polishes normally cost $10, so I kind of lost it. I'd wanted Troy for a while, and I couldn't resist buying myself three more—Aubrey, Jules, and Serenity—plus a fifth as a Christmas gift for a friend. That was nine days ago, though, and my order still hasn't shipped. Its status on the Zoya website has been stuck at "Picking/Scan Verification" for a few days now. A helpful Redditor tells me that Zoya received 400,000 orders on Black Friday and hers shipped this past Friday, so I'm hoping it won't be too much longer now.

I bought the NYX HD eyeshadow primer in March 2014, and though I never came close to running out, I did start to wonder if using the same doefoot tube of eyeshadow primer for two and a half years wasn't a little gross. Because it apparently takes me so long to go through primer, I bought a mini bottle of Primer Potion in that area near the Sephora cash register that's crammed with tantalizing minis. I was surprised to discover that the primer has a doefoot applicator, which is a bit awkward to pull out of the squeeze tube every time. But I've been liking the formula so far: it's a lot more effective than its NYX predecessor. (The NYX tube cracked dramatically right after I bought the Urban Decay replacement, as if it finally felt free to give up the ghost.) 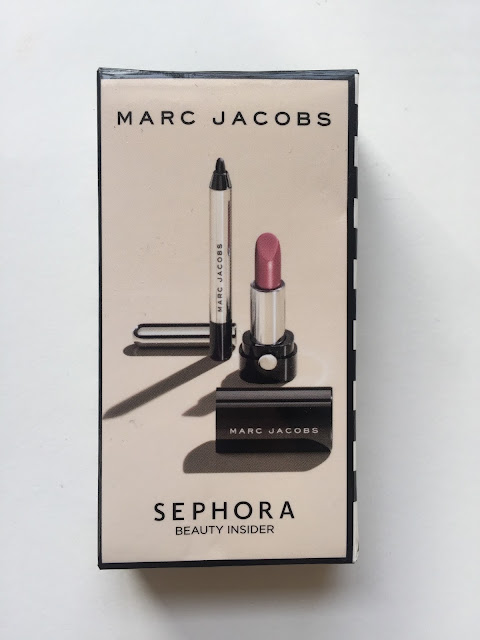 Lyn very kindly sent me the Wet n Wild eyeshadow trio in Plaid to the Bone after I whined about not being able to find it. The lesson here: always whine. (Seriously, thanks so much.) The two nail polishes and Liquid Suede are gifts from my mom: I asked for Brooklyn Thorn, but she chose the polishes herself. I've worn them both already, and I'm especially impressed with Essie Udon Know Me (from that cringily named Japan-themed fall collection), which lasted several days without chipping. Sinful Colors Nirvana is much cooler-toned on the nails than it looks in the bottle: it comes out closer to taupe than to warm brown. The Sephora birthday gift, as everyone knows by now, consists of two minis from Marc Jacobs Beauty: a Le Marc Lip Creme in Kiss Kiss Bang Bang and a pencil eyeliner in Blacquer. I haven't even used them yet, since I have a black eyeliner and a nearly identical rosy lipstick (Revlon Sultry), but it's nice to have backups for both of those much-loved products. 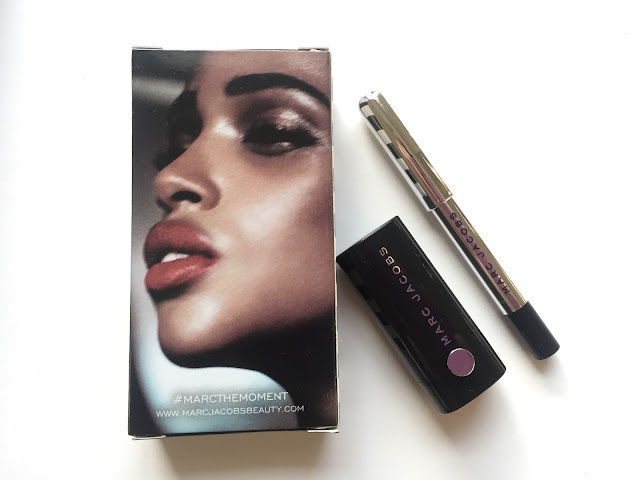 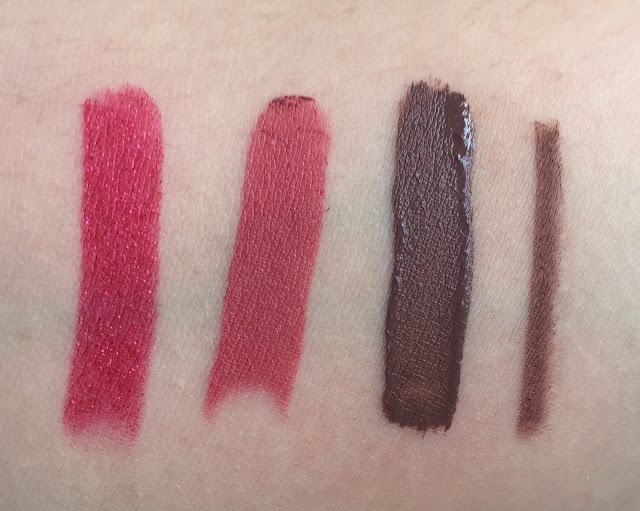 Overview: I think this is the lowest monthly total I've had so far! I didn't have to replace anything except my DevaCurl B'Leave-In hair goo, and I've stopped counting haircare in these posts because I never overbuy it. I own three hair products—Lush solid shampoo and conditioner and B'Leave-In—and I repurchase them only when I run out. If I took the same approach to makeup that I do to hair, I wouldn't need to write these low-buy reports. Which reminds me: didn't I swear back in October that I wouldn't buy any more lipstick this year?

I've had a couple of epiphanies while contemplating my resolutions for 2017. The first is that my budget of $40 per month is too generous. Most of the products I buy are from the drugstore (or have drugstore price points), so the $40 limit isn't doing much, if anything, to reduce the volume of makeup that enters my life. I set a "$40 and/or two products per month" rule early in the year, but couldn't seem to adhere to both. Next year I'll do away with the monthly price limit and enforce the two-items-per-month limit, which will keep me well under $40 most months. I could also set myself a yearly budget, as Renee did recently. My second epiphany: it's too easy to feel virtuous by reminding myself that I buy only a small fraction of the products I covet. If I covet 15 things per month and buy just 1/5 of those things, that's still three new items! I don't receive promotional emails from any brand, but I still need to do more to curb my awareness of new releases. I've unfollowed some Instagram accounts that focus on swatching new products; let's hope that helps. 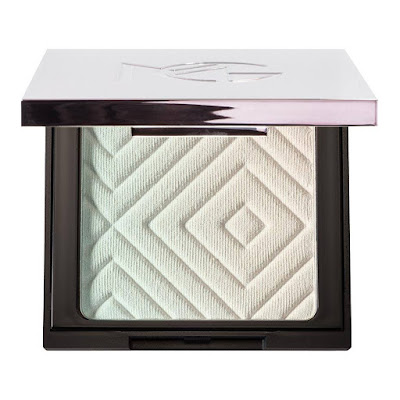 Yeah, speaking of new releases. Moon Phase is a white highlighter with blue and lavender reflects, and it looks absolutely gorgeous. It's also 2.5 times as expensive as my ColourPop highlighters, and it's a blue highlighter. I don't know, man. 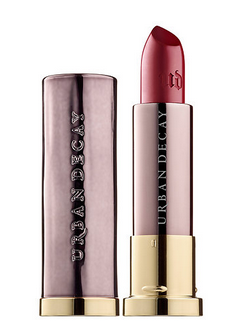 Tampered, a Sephora-exclusive shade, is a "deep mauve" in the Comfort Matte finish. The image I've used is really inaccurate: it's more of a plummy brown. I'll have to see this one in person, though: it looks different on everyone who swatches it, and I suspect I have at least one similar shade, possibly Revlon Matte Balm in Fierce. (My review of Fierce, written in February, is still one of my five most popular posts. I should really update it with better photos.)

And that's it! There's also a chance I might buy nothing in December, which would be a nice way to end this absolute shit cyclone of a year.

Posted by auxiliary beauty at 10:18 PM