One of the best lipstick formulas that I've discovered in 2016 is the NYX Liquid Suede formula. I generally prefer solid to liquid lipstick, but I've somehow collected three Liquid Suedes: Amethyst, Stone Fox, and most recently Brooklyn Thorn, one of the 12 new shades released this past spring. I have no idea what the name "Brooklyn Thorn" means—Googling the phrase brings up nothing more than the lipstick—but maybe one of you can enlighten me. During a visit to Ulta last month, I came upon a display of the new Suede Matte Lip Liners, which NYX debuted this year in shades that match the Liquid Suedes and some of the original matte lipsticks (e.g. Alabama, Aria, Maison). Out of curiosity, I picked up the Brooklyn Thorn lip liner as well. Here are the two together—I've already sharpened the lip liner twice: 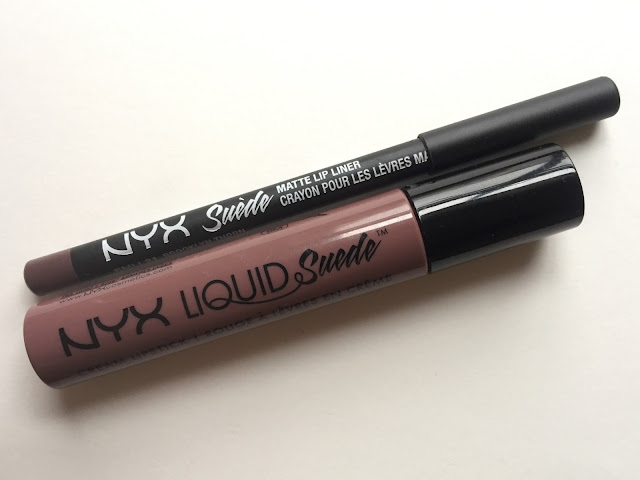 The Brooklyn Thorn Liquid Suede is a very trendy amalgam of gray, brown, and purple, along the lines of ColourPop Kapow or Jeffree Star Scorpio. Accordingly, it seems to be the most popular of the new Liquid Suede releases. I looked for it at San Francisco's Ulta in the summer, but it had sold out almost immediately. Three months later, when I requested Brooklyn Thorn as a birthday gift from my mom, she reported that she had to comb three different Targets before she had any success: "I feel like I found a million dollars!" The color of the tube is significantly lighter and warmer than the color of the actual lipstick. Here are some comparisons:


The Liquid Suede and lip liner don't match exactly (the liner is quite a bit warmer), though they look more similar on my lips: 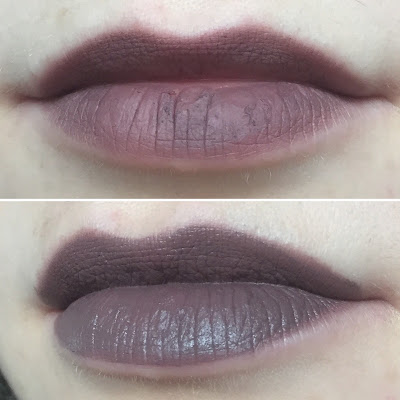 When I put on a lip color, I usually manage to connect it to some era or pre-existing aesthetic, and that act of connection makes me feel safer in any risk I might be taking. Brooklyn Thorn, though, reminds me of nothing but the mid-2010s. I suspect I'll look back in five years and cringe at these photos—but honestly, who cares? There's no such thing as timeless makeup, so we might as well embrace trends if they appeal to us, and this one appeals to me. 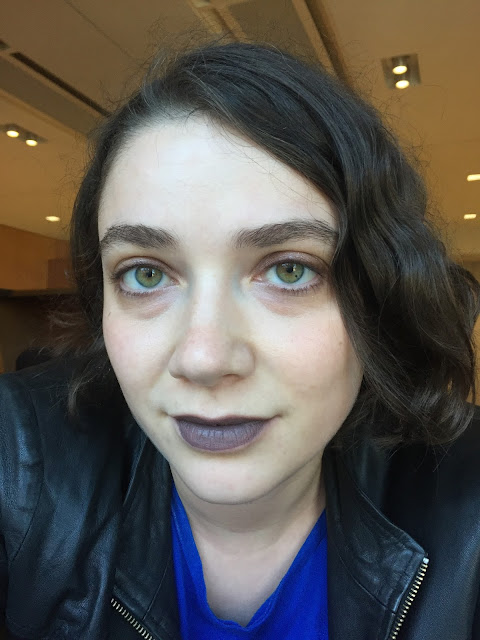 The Liquid Suede formula is somewhat contentious. In particular, I've read a lot of complaints that it doesn't dry down completely. It's true that the Liquid Suedes are never going to be completely matte—their full name is "Liquid Suede Cream Lipstick," after all, and you can see a slight sheen on my lips above—but in my experience, the formula dries down within a few minutes to a finish that's pretty damned close to matte. If I press my lips together, they do stick together a bit, but if I tap my lips lightly, my finger comes away dry. The Liquid Suedes will transfer a bit onto cups, but less than most bullet lipsticks do.

They are, however, fiddly to apply. The applicator picks up a good amount of product, and it's easy to make the mistake of swiping on all that product in one go, which will produce a thick coat that never dries down (hence, I think, the complaints I've read online). As with nail polish, it's best to apply multiple thin coats instead of one thick, goopy layer. Of the three Liquid Suedes I own, Stone Fox is the most opaque, Amethyst is the patchiest, and Brooklyn Thorn is right in the middle. It's not opaque in one swipe like Stone Fox, but I don't have to work the first coat into my lips with a finger or lip brush, as I do with Amethyst. I apply one thin coat, wait a couple of minutes for it to dry, and then add a second. The real problem for me is the stiff paddle-shaped applicator, which makes it annoyingly easy to overdraw my top lip and fiendishly hard to fill in the outer corners of my lower lip: 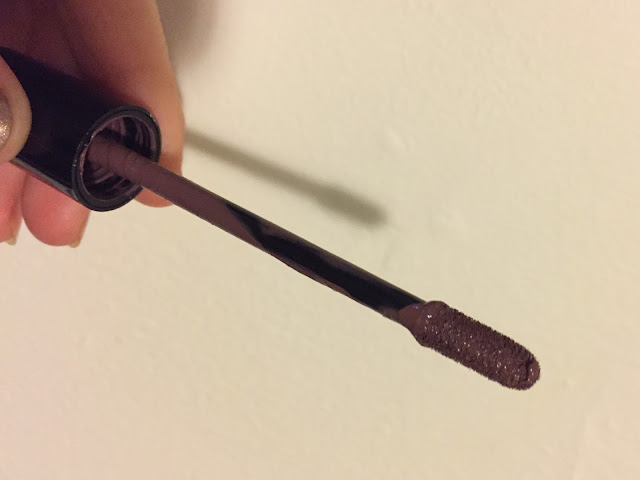 I took the FOTD photos for this post almost a month ago and failed to write down what else I was wearing on my face, so...yeah, sorry. Here's another one; all I know for sure is that one of my eyeshadows is the plum half of the NARS Habanera duo. The front of my hair is not actually going gray, though after the past few months I wouldn't be surprised if it were. 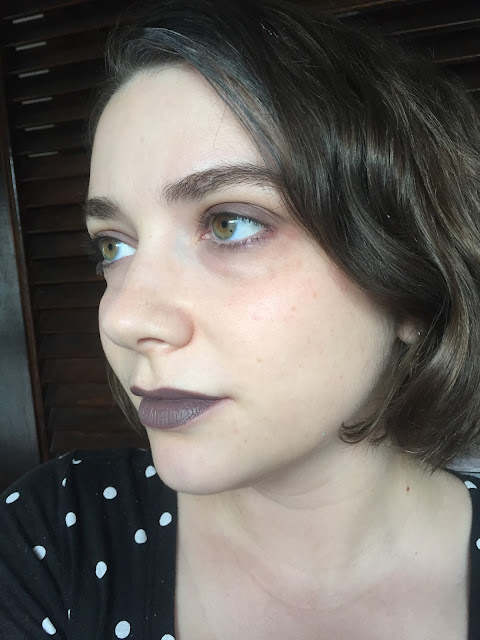 Now for the lip liner, a far more disappointing product. The Suede Matte Lip Liners are (obviously) supposed to be more matte than NYX's original lip liners, but that's an odd distinction to make: almost every lip liner I've tried has been more or less matte. And does it really matter whether a lip liner is semi-matte or super-matte when it's just going to be covered by lipstick anyway? Here's a swatch of the Brooklyn Thorn liner (right) next to Cabaret, a lip liner in NYX's original formula: 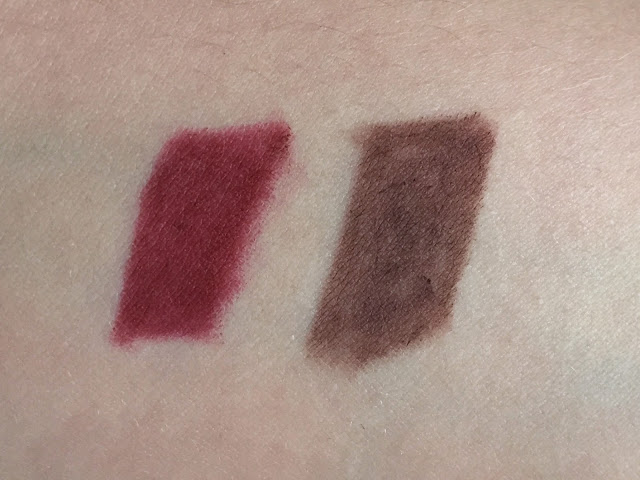 I had no trouble getting Cabaret to cover that patch of skin, but I really had to work with Brooklyn Thorn, and the swatch is still patchy. If it's that hard to draw on the smooth underside of my arm with this liner, you can imagine how hard it is to line and cover my actual lips. In creating a "matte" lip liner, NYX has done nothing but resurrect the old-school liner formula that should have been left in the '90s. The only way I can come close to coloring in my lips with the Brooklyn Thorn liner is to scribble on my fingertip and then use my finger to spread the product around. And NYX has the nerve to charge $1 extra for these liners ($4 vs. $3)! I will say that when I washed off these swatches with soap and water, Cabaret came off immediately, but I really had to scrub to remove Brooklyn Thorn. Still, I know from experience that Cabaret lasts a long time on my lips, and it doesn't matter how long-lasting a lip liner is if I never wear it because it sucks in every other way.

I do like the Brooklyn Thorn liner for tidying up the edges of the Liquid Suede, though, and I've also tried it under two problematic lipsticks: Topshop Boardroom, a greige, and NYX Up the Bass, a grayish purple. Here's Boardroom alone (top) and over liner: 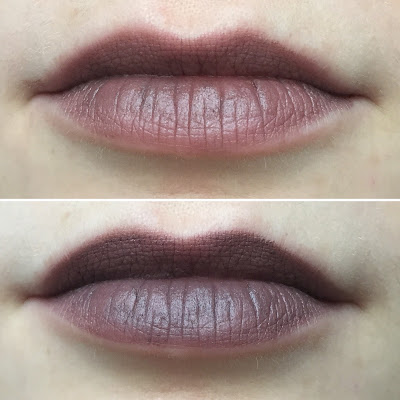 It turns out that you can get a pretty nice result from layering a patchy lipstick over a patchy liner. But that's not always the case—here's Up the Bass alone (top) and over liner: 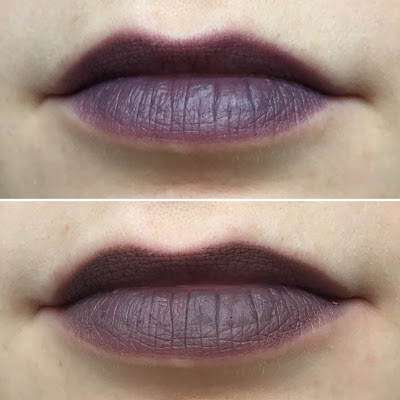 My biggest issue with Up the Bass is that it almost never adheres to the inner part of my lower lip, and you can see that the liner did nothing to solve that problem. It also drained most of the purple from Up the Bass, turning it into a duller version of the Brooklyn Thorn Liquid Suede. This combination felt heavy and gummy on my lips, so I doubt I'll layer Up the Bass over the liner again. Honestly, I wish I'd never bought either one. It's frustrating that I know (or think I know) so much about lipstick and still end up with disappointing lip products now and then.