I returned last night from the academic job conference and felt so drained today that I didn't leave the house once, which almost never happens unless I'm sick. (Today's high temperature was about 12°F, too. That was definitely a factor in my laziness.) Now that I have some more time, I'm looking forward to writing a couple of 2016 roundup posts. In today's post, I'll look back at my low-buy plan for 2016, concoct a (better, let's hope) plan for 2017, and make a few miscellaneous beauty resolutions.

At the beginning of 2016, I vowed to "maintain a low-buy of no more than two new products (makeup, nail polish, and fragrance) and/or $40 per month, with at least two no-buy months." The devil was in that "and/or." In the interest of simplicity, I decided after a couple of months to pay more attention to the "under $40" half of that resolution than the "no more than two new products" half. That was a mistake. There were indeed some months when I spent under $40 and bought no more than two new products, but because much of the makeup I buy is drugstore, it turned out that $40 could get me a lot of stuff. In the end, I bought more or less the same amount of makeup in 2016 as I did in 2015. Oh, and I completely forgot about that "at least two no-buy months" clause until just now. I told you I have a bad short-term memory.

Now for the successes. I did manage to stick to a monthly low-buy progress report for every month except December (check out those posts under the "low-buy 2016" tag), and I was more conscious in general of the emotions behind my material desires. I also got better at experimenting with products I already owned. Though I didn't hit pan on any more shadows from my Nude 'Tude palette, I did force myself to use it in several new ways. I used up one lipstick and almost used up another (more on that later), and hit pan on a non-lipstick makeup product, ColourPop Lunch Money, for the first time since December 2014. Here's my empty tube of Revlon Lacquer Balm in Coy: 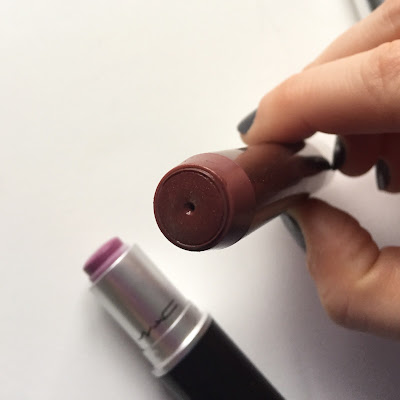 I also focused on improving my application skills, particularly with eyeshadow. I can usually silence that "buy new stuff" voice in my head by reminding myself that makeup isn't about the products I buy, but the looks I create with those products. I have enough makeup to achieve pretty much any look, and researching new aesthetics and techniques is free—and ultimately more fulfilling than buying a lipstick.

That said, I bought a lot of lipsticks in 2016. 14, to be precise. Plus two glosses. Plus the 10 lipsticks I received as gifts or free with purchase. That's 26 new lip colors, on a supposed low-buy. Seriously? I did destash several lipsticks that I no longer wore, but I still have more lipstick now than I did on this date last year. Look, I've never claimed to be a minimalist—I love having a good selection of lipstick. I love lipstick more than most things and people. But enough is enough, and it's clear that my monthly limit of $40 was way too generous. So, without further ado, my 2017 resolutions, including a new low-buy plan:

1. Buy no more than two new products per month.

By "products" I mean "makeup and nail polish," since I don't seem to buy too much of anything else. I'm not going to set a monetary budget, because my problem is less with overspending than with, shall we say, overaccumulating. If I stick to my goal of two new items per month, I'm pretty sure I'll stay well under $40 most months; it's not like I'm going to run out and buy a $250 Natasha Denona eyeshadow palette. For the record, the only product I've bought so far in 2017 is Milani's new Amore Matte Metallic Lip Creme in 15 The Ultimatte, a metallic plum. It feels pretty dry on my lips, but who cares because THAT COLOR: 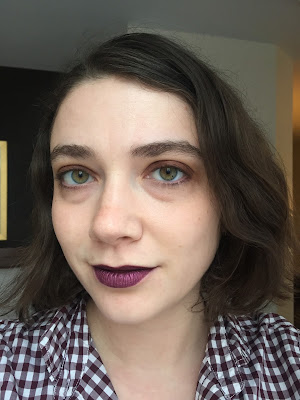 I have so much nail polish, guys. It is truly the last thing I need more of. I want to get a bottle of polish thinner to revitalize some of my old bottles, so if you know of a good one, please let me know!

3. Have at least two makeup-free days per month.

I love applying and wearing makeup. I love choosing a different aesthetic every day. I love bonding with strangers over lipstick colors. I love blending eyeshadows into a neat gradient (not that that happens every time, but that's why we practice). But despite all my feminist protestations, I don't wear makeup solely for creative purposes; I also wear it because I think I look better with it. When I wear light makeup or go barefaced, I'm often mistaken for a much younger person, which is more annoying than gratifying: I'm not an undergrad anymore, damn it, and I'm extremely glad that I'm not. I'm also self-conscious about the dark undereye circles I've had since childhood. In (flattering) natural light, with no makeup at all, I look like this: 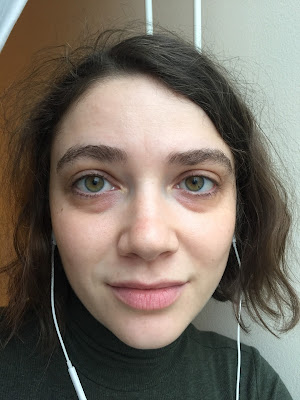 There's nothing wrong with this face (my hair could be better brushed, but hey). This was the face I showed the world every day for 23 years. I want to feel comfortable with it again. I probably won't go barefaced to professional events, but I'm looking forward to forgoing makeup during some weekends. I've already had one makeup-free day this month, when traveling back to the East Coast from San Francisco, and it felt surprisingly nice to wear nothing but sunscreen on my face. I didn't wear makeup today, either, but I'm not counting days on which I don't go outside!

To make things easier for myself, I'm including MAC Up the Amp in that number. I don't think there's more than three days' worth of lipstick left in that tube, so that's one almost crossed off the list. My five others are ColourPop Trap, Maybelline Vibrant Mandarin, Topshop Motel, Glossier Jam, and Urban Decay Streak, all of which are small and/or already well-loved. I doubt I'll be able to finish Vibrant Mandarin, but because it's showing wax bloom and I prefer matte lipsticks these days, I plan to toss it after this summer.

I sank into a sheer-wash-of-one-color rut for the last few months of 2016, but my ABH Modern Renaissance palette has made me excited about eyeshadow again. I'm not naturally talented at applying makeup, and my weird foldy eyelids will always prevent me from achieving an Instagram-flawless blended-out eye, but I know I can improve from my current level.

I don't want to make more resolutions than I can keep, so I'll stop here. If all goes according to plan, my next post will be a roundup of my favorite and least favorite beauty products of 2016!
Posted by auxiliary beauty at 9:13 PM

Email ThisBlogThis!Share to TwitterShare to FacebookShare to Pinterest
Labels: introspection, low-buy 2017, state of the stash