My 13 Least Favorite Beauty Products of 2016

Welcome to the first, and saltier, of my two 2016 roundup posts! A few notes before we begin:

1. Smith & Cult Nailed Lacquer [no, seriously] in The Bee Side


If you're going to charge $18 for nail polishes and fire up the hype machine to create an aura of luxury and exclusivity around them, the least you can do is ensure that they take less than an hour to dry and aren't patchy after three coats. Pastels are hard for any brand to get right in any product category (nail polish, lipstick, eyeshadow, you name it), so I'd ordinarily be more forgiving, but my $8 Formula X nail polish in Lively is far better quality at less than half the price.

Look, I love a well-considered brand aesthetic. But there's something about Smith & Cult that just rubs me the wrong way. The nail polish bottles are twice as wide as an Essie or Zoya, as if Smith & Cult is asserting that its polishes are twice as good as any other and therefore deserve twice as much space on your shelf. The website is so fancy that it stalls my browser, and the giant gifs splashed all over the page make it almost impossible to focus on the words. Which might be a good thing, because the product blurbs sound like they were excerpted from a trust-fund kid's "satirical" short story in her undergrad literary magazine: "It's all about everyone spending the entire time strongly insinuating that they are elevated and evolved because they eat organic uncultured Echinacea balls of green mulchy purity." The whole brand feels like a lazy rich-person vanity project aimed at other rich people. I mean, one of the polishes is literally named "Feed the Rich." Oh, and the "add to cart" label reads "add to swag," as if you needed another reason to bypass this brand. 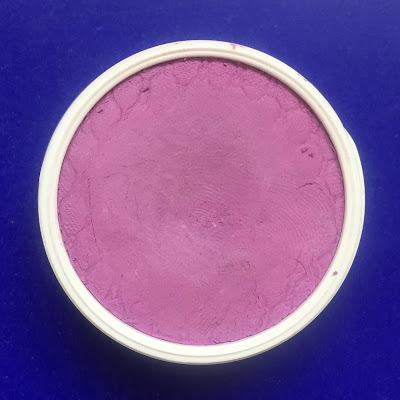 I don't hate this blush, but its texture has always annoyed me. I expected a ColourPop blush to have the same moussey, spongy texture as the brand's eyeshadows and highlighters. Instead, Rain feels like one of those softer products left open for a few days. I don't know if I got a dried-out product or if this is just what ColourPop's blushes are like, but it's only become more difficult over the past year to extract color from the pan. I was so excited to find an affordable purple blush, too! 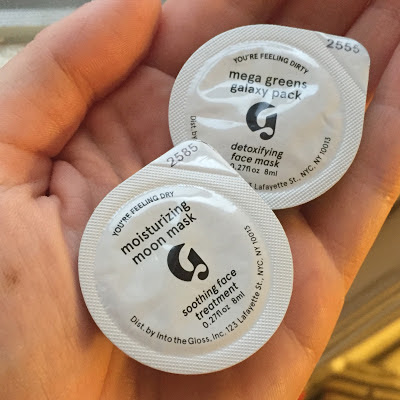 It wouldn't be an Auxiliary Beauty worst-of list without a mention of Glossier. My Instagram pal Amanda was kind enough to send me some Glossier mask pods from the holiday 2015 release, and here I am about to repay her generosity by shitting all over the Moon Mask. I will admit that the other mask in the set, the Mega Greens Galaxy Pack, is one of the most effective masks I've ever tried. The Moon Mask, though...it's not terrible, exactly, but I don't get the point. It's too thick to work as a night moisturizer (even for skin as dry as mine), yet too emollient to work as a normal wash-off mask. It left my skin feeling greasy but not unusually hydrated. I didn't break out or get hives or anything, but meh. 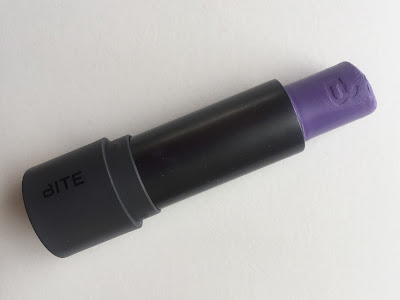 It pains me to put Lavender Jam on this list, because I adore the color, an almost neon blue-lavender reminiscent of the hydrangeas that bloom all over town in June. But my relationship with Bite Beauty over the years can be summed up by Samuel Johnson's description of a friend's second marriage: "the triumph of hope over experience." I ordered Lavender Jam sight unseen, knowing that no Bite formula had ever worked for me but hoping that the new Amuse Bouche lipsticks would be less slippery than their Luminous Creme predecessors. Alas, it was not to be. Lavender Jam slides off my lips within an hour, a sin that I might forgive in a less wacky shade. As it is, I've used almost half the tube because I have to reapply it constantly. I've given up on Bite for the foreseeable future, despite feeling just a bit tempted by their new Edgy Neutrals collection, a quartet of yellowy browns guaranteed to make me look like hell.

Almost every time I break my "no ordering before swatching" rule, I come to regret it. After my disappointment with Marc Jacobs So Sofia, I decided to order Topshop's coral Matte Lip Bullet, which was so new that I couldn't find any swatches online. The product shot above is very inaccurate: Wink turned out to be a faded beigey coral, far less pigmented than the other Matte Lip Bullets I'd tried, with weird gold sparkles throughout. Not shimmer or frost, but discrete particles of gold glitter. And I couldn't even return it. I threw it away after wearing it twice and felt so wasteful. Never again.


It struck me just now that the quality of a beauty product might be inversely proportional to the length of its name. Have I hit upon a foolproof method for avoiding bad makeup and skincare? Let me know. And don't buy this mask. It's supposed to dry on your nose and cleanse your pores, but it did neither of those things. It had the color and texture of chewed bubble gum, and it was just as ineffective as a skincare product.


I should have known better than to buy these. I should have known so much better. But about midway through the year, I reached the point where all I could see when I looked in the mirror were the pores on my nose. So after trying a couple of gentler remedies, I went for the hardcore option, or what I thought would be hardcore. As it turned out, the pore strips were fiendishly difficult to use, and all they did was remove the top layer of skin from my nose. I feel so dumb.

8. NYX Matte Lipstick in Up the Bass 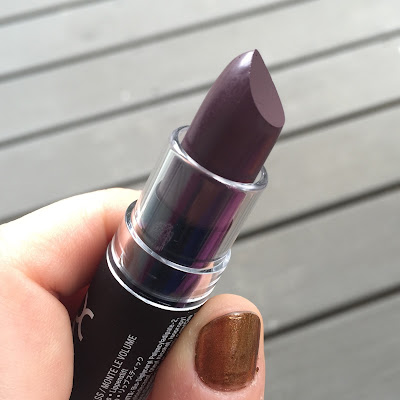 You've likely had the dispiriting experience of buying a product you've wanted for the better part of a year, eagerly trying it on at home, and discovering within a few seconds that it sucks. It's unpleasant to reflect that this is what you spent so much willpower on—and this, too, is what broke that willpower and opened your wallet. I wanted so badly to love Up the Bass, despite (or because of) its lolariously vulgar name. The deep gray-purple was the first shade that caught my eye when NYX expanded its matte offerings at the beginning of 2016, and because I'd had such good luck with brick-red Alabama, I assumed that Up the Bass would have a similarly opaque, comfortable, long-lasting formula. Instead, it was patchy, slippery, and given to fading within an hour of application. I'm not always glad I live in America, but it certainly is nice to be able to return shitty makeup. In December, I took Up the Bass back to Ulta and used my store credit toward a far superior product: Urban Decay Vintage Vice Lipstick in Roach, a metallic bronze.

In 2017, I'm going to be a lot more wary of drugstore makeup, and of NYX in particular. There's a certain thrill in buying a weird cheap product that might disappoint or might be a hidden gem, but let's be honest, it's usually the former. The Russian-roulette mentality leads to a lot of wasted time and money, and I'd rather not buy a product in the first place than run the risk of having to return it. Reduce consumer waste 2k17, people. 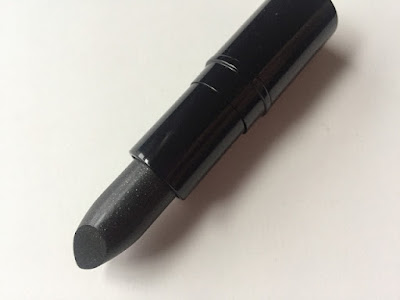 You had one job, Lipstick Queen: making good lipstick. Instead, you took the Smith & Cult route, crafting elaborate stories around your expensive products to obscure their mediocrity. Black Lace Rabbit had such promise, but I couldn't make it work. It was patchy on its own, giving me less of a "smoky lip" than a "post-burger lip." Layered over other lipsticks, it reduced their longevity dramatically. Again: so glad I live in the land of easy makeup returns, even if the tradeoff is President Trump, unaffordable healthcare, and no gun control to speak of...oh, wait. 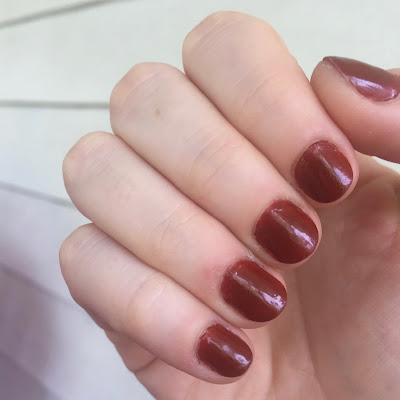 I read several enthusiastic reviews of Playing Koi before buying it. I wonder how the reviewers reached that conclusion: anyone who tried the bottle I got would notice that it's still patchy after three coats. It's also darker and browner on the nails than I expected. And I spilled half the bottle all over my desk one night, which is really my fault, but I'm going to blame Essie anyway. Clearly this polish is cursed. If you're going to buy a shade from Essie's fall 2016 collection, go for Udon Know Me, a dusty light aqua that lasts several days without chipping on my nails. 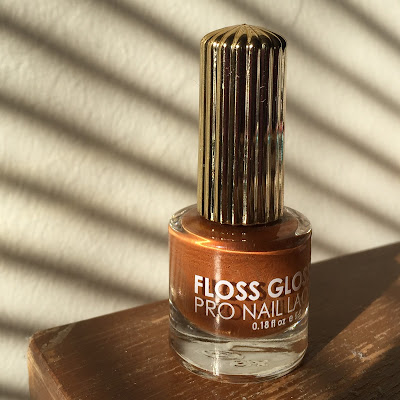 It's rare that I give up on a brand entirely, but I've more or less given up on Floss Gloss. I've now tried four of their polishes—BritBrit2000, Dimepiece, Dinge, and Donatella—and haven't been terribly impressed with any of them. The worst is Donatella, which is a beautiful gold-shimmered pumpkin color for the 12 hours it lasts on my nails before it begins chipping. Made in Brooklyn, Floss Gloss has an exuberant, emoji-filled social-media presence ("👯 💕🏁MADE 4 THE BAD GRLS🏆💵") and a temptingly eclectic color selection, but its formulas just suck and there's no getting around that. 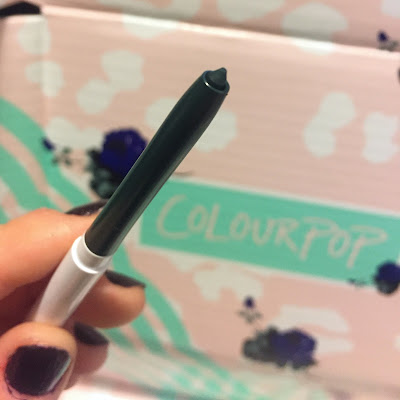 ColourPop is the Russian-roulette experience of drugstore beauty shopping taken to the nth degree. Because ColourPop's products are nonrefundable unless they arrive damaged (and even then it's iffy), yet also impossible to try before buying, you know you're taking a risk every time you place an order. And that's a problem, but it's also part of the appeal. Yes, your new eyeliner might be a total waste of $6, but what if it proves to be the best $6 you ever spent? This kind of thinking is addictive in the same way that gambling is addictive, and like gambling it does nothing but drain your bank account. Of the ColourPop products I've tried over the past two years, I've loved maybe a third, felt indifferent to a third, and actively disliked a third. Those aren't great odds, and I'm going to try very hard to resist the siren song of ColourPop in 2017.

I started wearing eyeliner regularly last summer, and after switching between black and brown pencils for a couple of months, I decided to expand my color horizons. ColourPop's eyeliners had received a decent amount of praise, so I ordered Fast Lane, a dark teal. I realized later that much of the praise had come from people who had used the eyeliners on their waterline, which I never do (I wear contact lenses and the thought of placing pigment practically on my eyeball squicks me out). Instead, I tried Fast Lane on my upper lashlines, which wasn't a success. It looked decent at first, but after two hours the color had faded and transferred to my undereye area. Not a good look for a teal eyeliner. 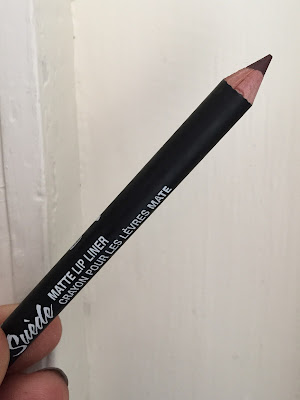 NYX has released a zillion new lip products in the past year, and this relentless focus on NEW NEW NEW ALL THE TIME has inevitably produced some duds. The lip liners in NYX's original formula are fabulous—creamy, opaque, and long-lasting—and I don't understand why NYX didn't add trendier colors to that range instead of releasing a totally new, and vastly inferior, formula. To be fair, Brooklyn Thorn is the only shade I've tried in the Suede Matte formula, but it's bad enough that I have no desire to buy any more. It's patchy, it drags so hard against my lips, and it doesn't even sharpen smoothly—the exposed wood is all rough and spiky.

Next up, my favorites of 2016! Did any beauty products disappoint you last year?
Posted by auxiliary beauty at 11:18 AM