Milani was perhaps the first drugstore brand to release a true matte liquid lipstick, back in the summer of 2015. I tried one of the original limited-edition shades—Crush, a dark brown—but hated it. The lipstick went on patchy, felt painfully dry within an hour, wore off in noticeable flakes, and had a strong root-beer-float smell. So when Milani made the Amore Matte Lip Crèmes permanent in 2016 and released dozens of new shades, including metallics, I didn't pay much attention.

That changed last month, when I popped into a Rite Aid in Philadelphia to look for the Wet n Wild Liquid Catsuit lipsticks and came upon a display of new metallic Amore Mattes. And there was a metallic dark purple, you guys. And this was where common sense should have taken hold, to remind me that I'd been let down by the formula before and I didn't need another vampy lipstick I couldn't wear often. But I was preparing for an interview and had allotted all my reason to that, so I had nothing to counter the temptation of a new lipstick. All that remained was a collection of vague impulses along the lines of ooh purple and ooh sparkly and hey I haven't bought any new makeup yet this year, never mind that 2017 was exactly a week old. 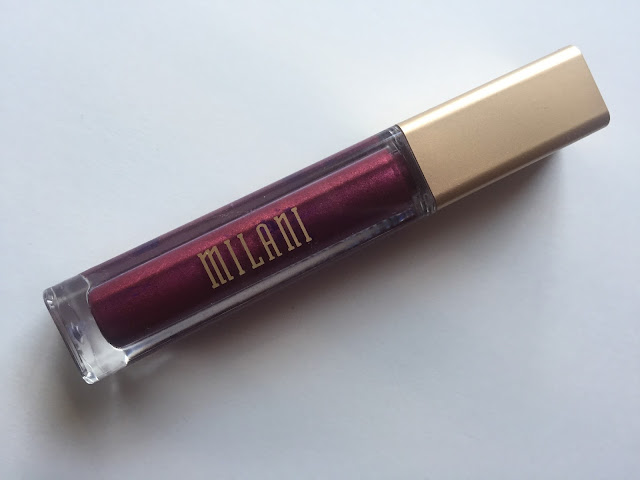 Milani's liquid-lipstick taxonomy is rather complicated, especially for someone who hasn't been following the brand's new releases. Milani offers a total of 52 (!) liquid lipsticks at $9 each. The website groups the lipsticks into "Amore Matte Lip Crème" and "Amore Matte Metallic Lip Crème," though some of the non-metallics are designated "pearl," which sounds an awful lot like "metallic" to me. There are 37 shades in the former category and 15 in the latter. The shades are numbered, but the numbering goes 1-15 for the metallics and 10-42 for the non-metallics, and there are overlaps in numbers between the two categories, and some numbers between 10 and 42 are missing in the matte group. Thank god each color has a name as well as a number, or I'd give up entirely. Every shade name in the metallic group is a pun on "matte" ("Matte About You," "Automattic Touch," "My Soulmatte"), which is cute, though I can't help wishing Milani had devoted some of that ingenuity to its numbering system.

The Amore Mattes have a large doefoot applicator that I find somewhat unwieldy. Because it's squared off at the end, I have a hard time getting into the corners of my lips, but people with fuller lips than mine might not have this problem! The applicator picks up a lot of product at once, so I find myself wiping it on the rim of the tube. 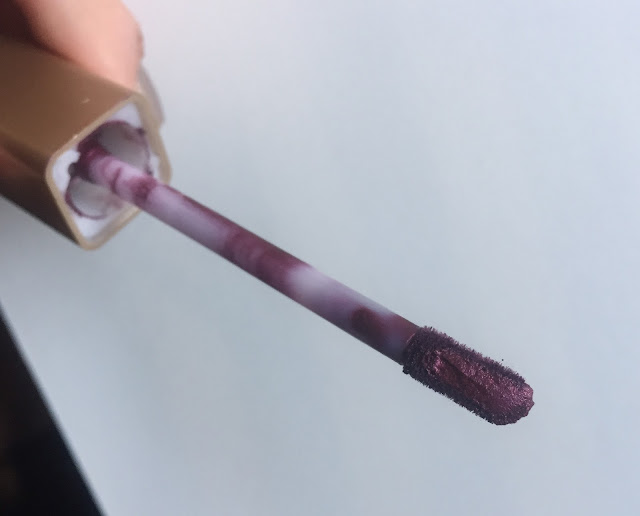 The lipstick I chose is #15 The Ultimatte, which Milani describes simply as "plum." It does indeed look plum in the tube and in arm swatches, but it turns more purple on my lips, to which I don't object at all. Here it is in indirect (left) and direct natural light: 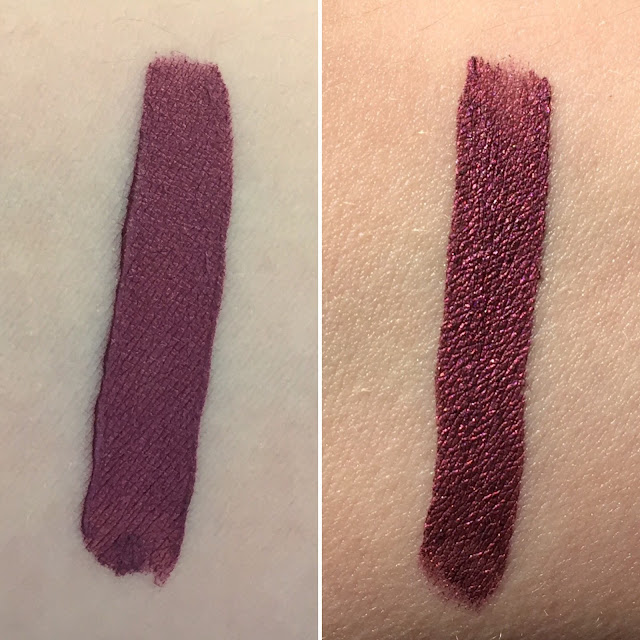 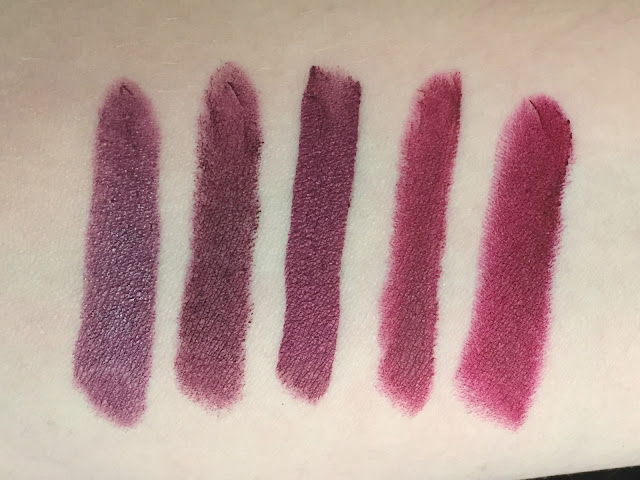 One coat on my lips: see how much more purple it looks? I didn't use a liner this time, but sometimes I draw a faint line with NYX Cabaret just to guide my hand. 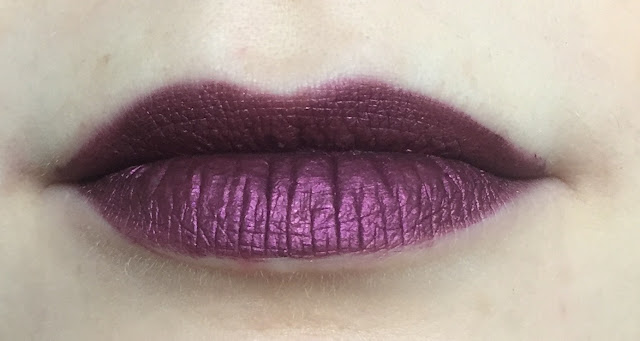 The formula certainly has pros and cons, and though I really enjoy this particular shade, I won't be buying more Amore Mattes anytime soon. Two things haven't changed since I tried my first Amore Matte in 2015: the overpowering root beer fragrance and the dryness of the formula. Not only is the scent extremely strong, it also lingers for close to an hour after application. The lipstick goes on very evenly, with no patchiness at all, and dries down almost immediately. It does wear off on the inner part of my lower lip if I drink, but stays put on the rest of my mouth unless I eat something oily. It's impossible to remove the lipstick without some sort of oil: just wiping it with a tissue does nothing. Predictably, this longevity comes at a price: my mouth starts feeling dry very quickly, and the metallic finish emphasizes my lip lines. However, my lips don't feel worse after I remove the product, so I can put up with some extra dryness while I'm wearing it. That color is just so pretty omg. I want to call it "Tyrian purple": it has a very ancient-Mediterranean vibe, I think. It makes me feel like Carthaginian royalty, though I don't think Dido wore much red flannel: 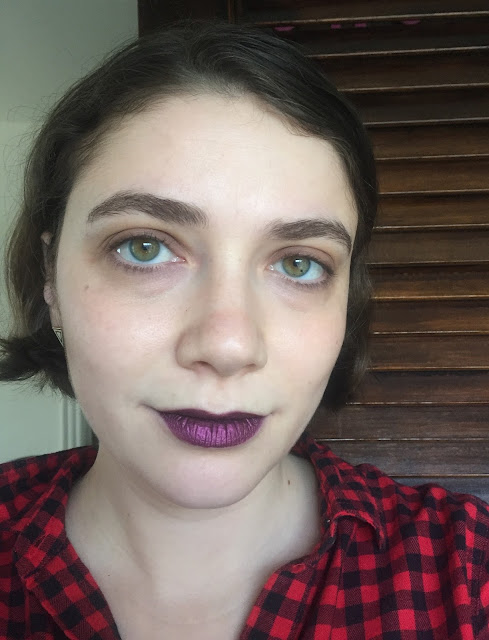 Sometimes I want to go all out with smoky eyes and dark metallic lips, but I just don't have that kind of lifestyle, so you get this rather boring look instead. I'm wearing ABH Warm Taupe eyeshadow (from Modern Renaissance, of course), Urban Decay Whiskey eyeliner, and Urban Decay Rapture blush.

Up next, a drugstore liquid lipstick whose formula I much prefer to Milani's. Have you tried any of the Amore Mattes?
Posted by auxiliary beauty at 4:09 PM