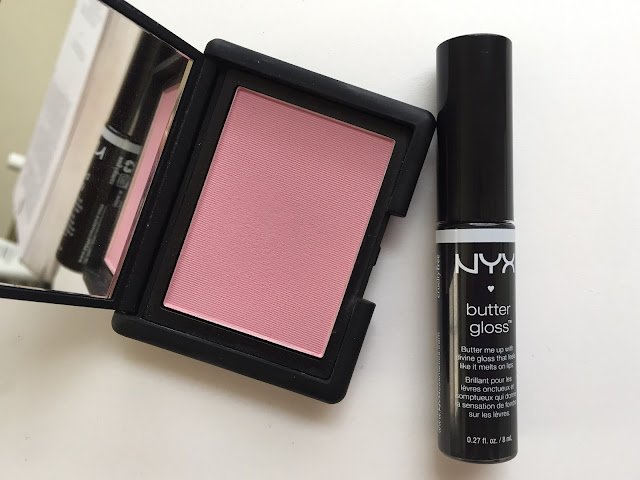 Yay, I managed to buy just two new pieces of makeup! One was carefully planned, while the other (the BLACK LIP GLOSS, obviously) was a Target impulse buy. Unfortunately, I'm not thrilled with either one. From the photos I saw on Instagram, I expected NARS Threesome to be a little cooler and purpler than it is. And because it's such a light color (seriously, it's almost white), I have to use quite a bit of product to get it to show up. I don't dislike it, exactly, but it's not what I expected. Yet another reason to swatch before buying, damn it.

NYX Blackberry Pie has the opposite problem: it's way more pigmented than I thought it would be. I've owned three other Butter Glosses, all of which delivered a nice hit of color but were definitely on the sheer side, and I bought Blackberry Pie hoping it would be that sheer black lip color I've been seeking in vain for so many months. And, um: 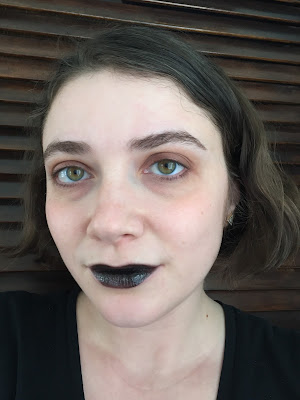 I thought I'd spend 2017 easing slowly into opaque-black-lip territory, but here I am already. Blackberry Pie looks like patent leather on my lips, which makes me feel cool, but it wears off quickly and it's too thick to be sheered out over another color. But hey, now I own a black lip gloss! 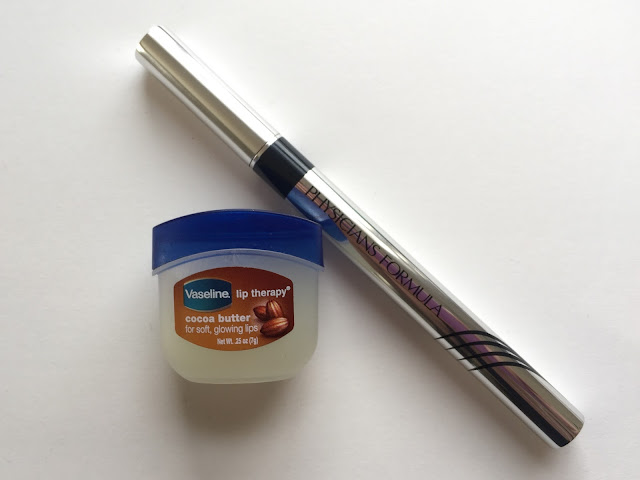 Does a product count as a "replacement" if it's replacing something I last owned two years ago? I'm going to go with yes. After three years of trying and failing to make Maybelline's Line Stiletto work for me, I gave up on liquid liner. Lately, though, I've been wanting to try again with a better product. After reading Lyn's review of the Physicians Formula liquid liner, I decided to pick it up. So far, I'm pretty impressed! I wish it were darker and more opaque on first swipe, but the thin brush tip gives me a lot of control, and the liner lasts all day.

I bought that little container of Vaseline Lip Therapy with cocoa butter after running out of my usual Palmer's cocoa-butter balm and failing to find another one at my local drugstores. And guess what: I think I've found my new holy grail lip balm. When I bought the Vaseline, my lower lip was cracked and painful. I applied the balm before bed and my lip was healed the next morning. Magic.

Notes: I was really broke in February. I mean, I'm always more or less broke because I'm a grad student, but February was especially bad. Though I wasn't tempted to spend more money than I had, I found myself making lists of all the makeup I'd buy with my next paycheck. I've been noticing a troubling psychological pattern: the less money I have in the bank, the more fiercely I want to buy shit, as if to prove to myself that I still deserve the occasional treat. Yet the day after I got paid (I'm teaching and working at the library now, so I'm earning more than I was last semester), all those cravings vanished. As if awaking from an evil spell, I started thinking more sensibly: okay, let's put X amount in savings, pay rent and utilities, wait a couple of weeks, then maybe get a new lipstick. Why does my brain do this?

By the way, I've been keeping up with my document tallying my lipstick use. My most-worn lipsticks this year, with four wears each, are Revlon Fierce, Revlon Pink Truffle, Urban Decay Backtalk, Wet n Wild Missy and Fierce, and Wet n Wild Nudist Peach. Runners-up, with three wears each, are ColourPop Trap, Glossier Cake, Maybelline Smoking Red, Milani Matte Naked, Milani The Ultimatte, Revlon Sultry, and Sephora Coral Sunset. Every time I open this document, I'm reminded of how many lipsticks I own and how few I need.

The Cloud Paints launched this morning, and I ordered Puff an hour ago. I needed a new tube of Boy Brow anyway, and I've been wanting a pastel pink cream blush for those k-beauty editorial vibes, and the tubes look like little paint tubes, I mean can you even? The Cloud Paints are the first Glossier release for which I've felt active excitement. I even dreamed I was buying one of them, which is pretty sad, I realize. Exhaustive review and Glossier snark to come, I'm sure! Though let's be real: at this point, I'm drinking the Glossier Kool-Girl-Aid like everyone else.

As I've mentioned before, I've been searching for a matte version of MAC Up the Amp, which I finished earlier this year. I spent some time vacillating between Men Love Mystery and ColourPop Matte X in Back Up, which is only $5. But I know I like the MAC matte formula because I own three other MAC matte lipsticks, and I know MLM is the color I want because I've swatched it more than once. I've never tried the ColourPop Matte X formula, so I have no idea how my sensitive lips will react to it, and judging a lipstick's color by filtered Instagram swatches is always risky. And yeah, it's only $5, but if I order it I'm going to throw at least three other things in my ColourPop cart. I know I am, and you know it too. Best to avoid that altogether. Since I just bought Puff, though, I'm probably going to wait a couple of weeks to order Men Love Mystery. (God, I hate that name. HATE IT.)
Posted by auxiliary beauty at 11:52 AM