On the "Fakeness" of Social Media

Yesterday I came across a very insightful post on r/MakeupRehab, titled "A thought on the fakeness of Instagram..." It's a long post, so I won't quote it in full, but the writer argues that successful Instagrammers like her sister, women whose posts feature them "in trendy places in even trendier outfits," perpetuate an internalized misogyny that filters down to the social-media accounts of ordinary women:

To my own surprise, I found myself pushing back a bit:

Needless to say, it's disturbing that girls and women feel pressured to present a glossy, sanitized persona on social media. But it also bothers me that criticism of that pressure often takes the form of "we should be totally raw and honest ALL THE TIME." That strikes me as a holdover from an earlier era of the internet: the overshare culture of the 2000s and early 2010s, the xoJane "It Happened to Me" series, the LiveJournal/Emily Gould/Julia Allison (remember her?) brand of confessionalism. Back in 2015, Slate ran a great story on the "first-person industrial complex," the journalistic model that "incentivizes knee-jerk, ideally topical self-exposure," often at the expense of the writer's professional reputation and personal life. Yes, that's the other extreme of online self-commodification, but the assumption behind it is widespread: that a social-media account should provide a full, often unflattering, picture of a life. This is its own flavor of misogyny: the idea that women should package their emotions, traumas, and mistakes for public consumption. When was the last time you heard a man described as "fake" because he didn't post about eating that third bag of Cheetos? "Fake" is a gendered criticism.

I've mentioned in passing that I deal with various mental-health shit on a daily basis. I have depression, anxiety, and ADHD. I've been in and out of therapy since the age of 13. And yes, I do think it's important for people to be more open about mental illness so that we can collectively reduce the stigma attached to it. But I also think that principle extends only so far. If providing daily Instagram updates about your depression level helps you cope, then by all means do it; I'm not arguing that you shouldn't. But providing those updates wouldn't be good for my mental health, and isn't that what I'm trying to preserve in the first place? I don't see why should I feel guilty about that.


When I follow someone on Instagram, I take for granted that there are things they share with their best friends, romantic partners, and doctors that they're not going to share with me, a rando on the internet. And I'm totally fine with this. Why shouldn't I be? Social media has blurred the boundary between person and persona, but it's the viewer's responsibility to stay conscious of that boundary, not the Instagrammer's responsibility to go live when she's crying over a breakup. If we don't reveal everything about ourselves to everyone we encounter in real life, why should we feel obligated to do so online?

All that said, the people I enjoy following on Instagram are people who offer unglamorous glimpses of their day-to-day life. That's what I offer, too, because that's all I have to offer. If someone I follow starts airbrushing her selfies or shilling diet products, that's an unfollow from me. But I've never resented anyone for not sharing more of her problems. Peeking into other people's lives through social media is a privilege, not a right, and I think it's possible—and preferable—to strike a balance between Jezebel-circa-2010 oversharing and Kylie-circa-2017 glossy perfection. Really, though, I'm curious to know what others think! How do you prefer to share your life on social media?

And because this post doesn't have nearly enough photos, here's the metallic blue lip I put together before showering last night, after I'd removed most of my other makeup. I patted Topshop eyeshadow in Holograph over NYX Velvet Matte lipstick in Midnight Muse, and I love the intergalactic-disco effect, though I fear an intergalactic disco is the only place I could wear this look. Know of any good ones? 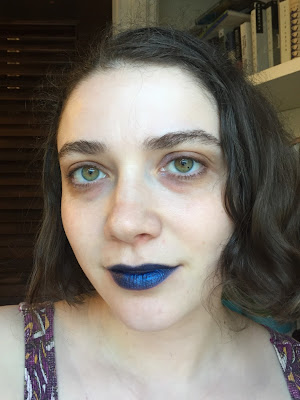 Posted by auxiliary beauty at 12:17 PM

Email ThisBlogThis!Share to TwitterShare to FacebookShare to Pinterest
Labels: feminism, introspection, misc., the business of blogging