I was eight for most of 1996, but I remember that year quite well. In fact, I remember it as an especially good year in my young life. My parents and I had moved to San Francisco the year before, back when an assistant teacher and a busker at Ghirardelli Square could afford a nice two-bedroom in Cole Valley. The Summer Olympics took place in Atlanta, and my best friend Dana and I played with her new gymnast Barbie (complete with parallel bars). I owned a fuchsia velour T-shirt embossed with daisies. My parents drove a 1983 Toyota Corolla. My mom and I laughed at the mysterious "www." and ".com" appearing on billboards and bus ads all over the city. On the evening of the presidential election, my dad picked me up from ballet and I said "Clinton won, didn't he?" and my dad, very pleased, said yes. And the upstart beauty brand Urban Decay launched its first collection: nine lipsticks and a dozen nail polishes in bizarre metallic colors with names like Smog, Plague, and Asphyxia.

All right, so I don't remember that last detail. But I was still excited when I learned last summer that Urban Decay was bringing back its original product lineup for its 20th anniversary. And the lipsticks' brown cardboard boxes looked familiar enough that I know I must have seen them, or something very like them, back then. To paraphrase another cultural touchstone of the late 20th century, Nigel Tufnel: "It's like, how much more '90s can you get? And the answer is none. None more '90s." Honestly, I prefer the brown boxes to the current gaudy ones. (Nouveau Cheap has a great post, itself now seven years old, on the evolution of Urban Decay. Did you know they used to sell temporary tattoos?) 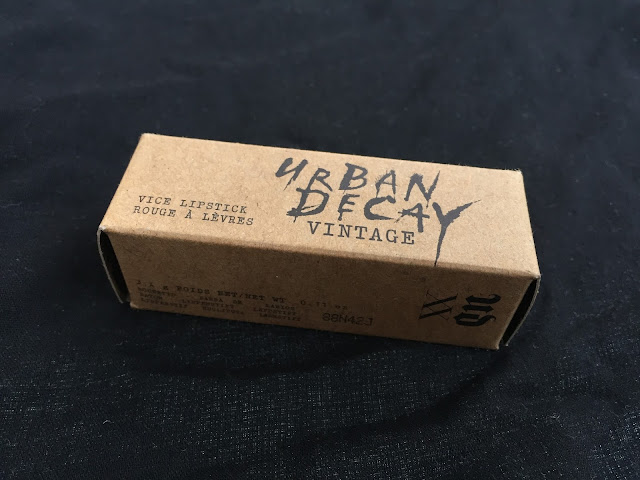 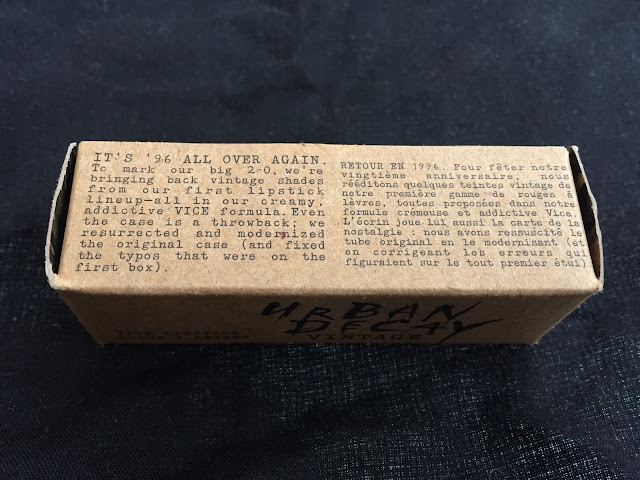 The XX lipsticks must not have sold very well, because they were marked down to $11 (from the original $18) by December. I was a little surprised, given the current popularity of metallic and frosted lipsticks in offbeat colors, but the problem may have been opacity: the repromoted UD shades ranged from slightly translucent to quite sheer. Below are Asphyxia (which, appropriately, made me look dead when I tried it on) and Oil Slick: 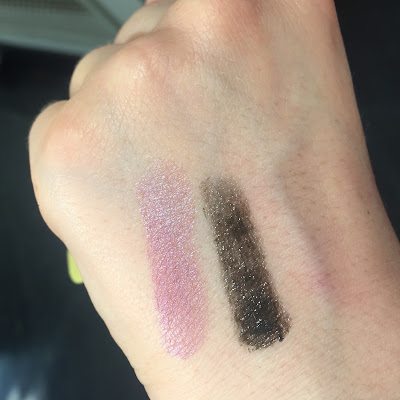 I assumed that if I ended up with any of the shades, it would be one of the three purples. But while returning NYX Up the Bass at Ulta in December, I found myself drawn to Roach, a rich bronze. Longtime readers might remember that after NYX released its metallic Wicked Lippies in 2014, I coveted the orange-bronze Wrath for at least a year before deciding I wouldn't wear it enough to justify the purchase. Now here was a slightly cooler-toned bronze in a higher-quality formula, for a mere $11. I couldn't resist. 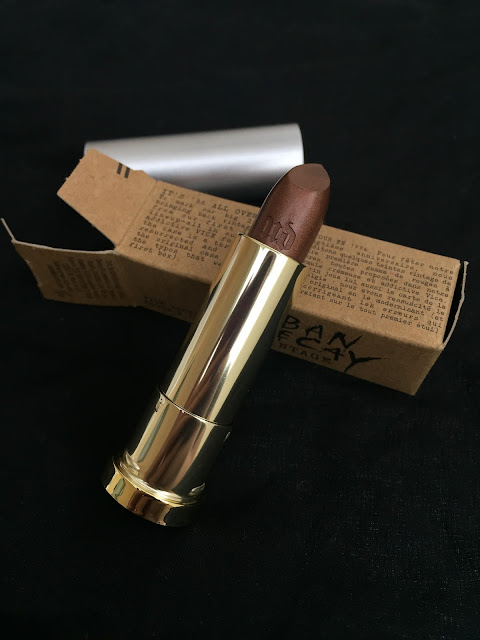 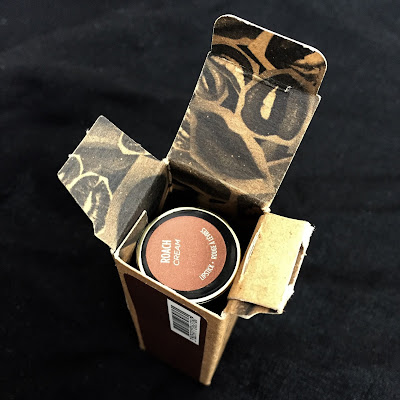 Roach was one of my favorite purchases of 2016, mainly because it achieves the near-impossible: it's a playful metallic lipstick that manages to be almost neutral. I can wear it out of the house without feeling acutely self-conscious, but it's far from boring. I also appreciate that it verges on taupe while still retaining an bronzey warmth: 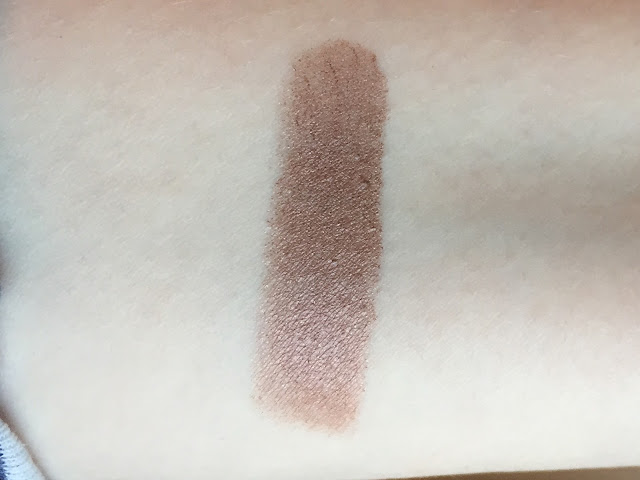 I had no idea which of my lipsticks would make good comparison swatches, so here's Roach between two other medium browns: MAC Whirl (L) and Revlon Fierce (R). As you can see, Whirl and Fierce are far redder than Roach, which looks almost yellow-based here. 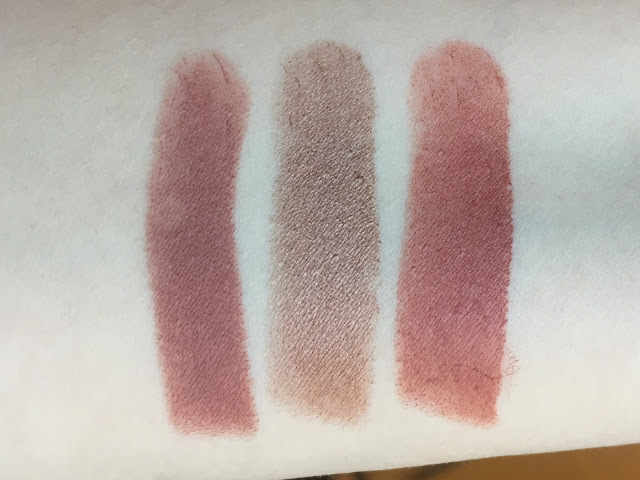 One coat of Roach provides almost full opacity, but I generally use two. The Vice lipsticks are scent- and tasteless, and Roach's formula is comfortable and moisturizing without being slippery. Most metallic lipsticks these days come in more or less drying liquid formulas, so it's nice to own a true metallic lip color in a more congenial formula. The color changes quite a bit depending on lighting, so I've done swatches in natural light (above) and fluorescent light (below). 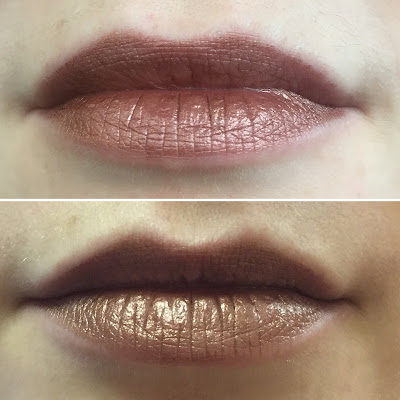 My makeup concept today was "shit I have ten minutes to do makeup before therapy and we're just going to be driving around central Jersey in the rain after that," so uh, enjoy. I thought the NYX Jumbo Pencil in Iced Mocha would pair well with the plum half of the NARS Habanera duo, so I smeared Iced Mocha all over my eyelids and layered Habanera on the outer third. Unfortunately, the two colors blended into a muddy brownish wash and I had no time to improve the look, so I tightlined with Urban Decay eyeliner in Whiskey and called it a day. I'm also wearing Illamasqua cream blush in Zygomatic and ColourPop highlighter in Lunch Money. 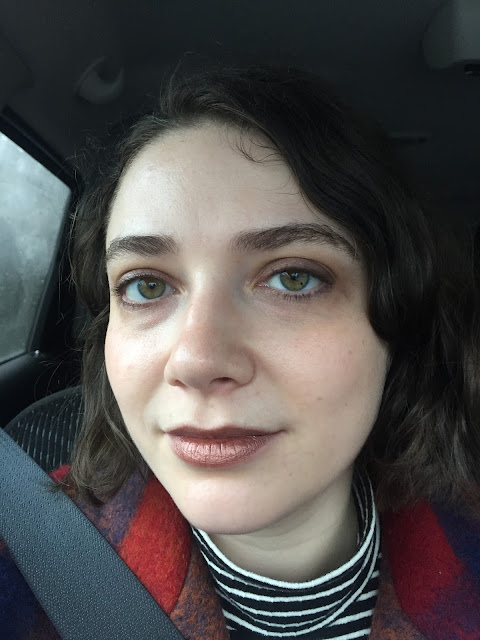 I scrolled through my photos to find slightly more inspired looks that incorporated Roach, but it turns out that I always pair it with boring neutral eyeshadow because I fear that a distinctive eye look will be Too Much with bronze lipstick. I think Roach would look beautiful with a Modern Renaissance pink/red eye, and perhaps one day I'll do that and update this post. But sloppy brownish eyes and cheeks are certainly in the spirit of 1996, so let's pretend that's what I intended all along.
Posted by auxiliary beauty at 9:09 PM