My boyfriend recently left his job in the UK, which is great news relationship-wise: we met in my former graduate program and have been long-distance since I transferred to my current school seven (!) years ago, and now we'll actually be able to live together for more than a couple months at a time. On a shallower level, however, this will be my last transatlantic makeup review for a while. Before my boyfriend returned to the US earlier this month, I sent him to the Kiko store in the Birmingham train station, where he very kindly swatched a few shades of the Velvet Passion matte lipstick line. (Weirdly, there's another Kiko store five minutes away, in the enormous mall attached to the station.) Here's the full display of the lipsticks, which launched last year. Each one retails for £7 (about $9). 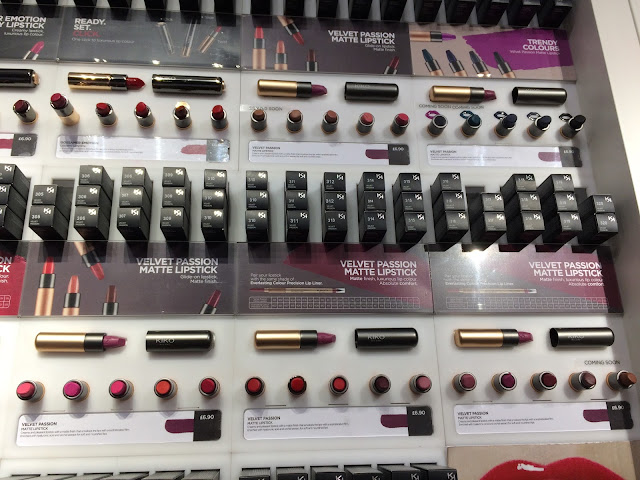 The shade I chose was 319 (Chocolate), a medium plummy brown that feels very Jazz-Age-casual to me. The Velvet Passion lipstick bullets have an odd squared-off tip that resembles a fountain pen; this review points out that they look identical to the Charlotte Tilbury Matte Revolution lipsticks, and I wouldn't be surprised if they were made in the same factory. Overall, the lipstick looks and feels more luxe than I'd expect from a brand with drugstore pricing. 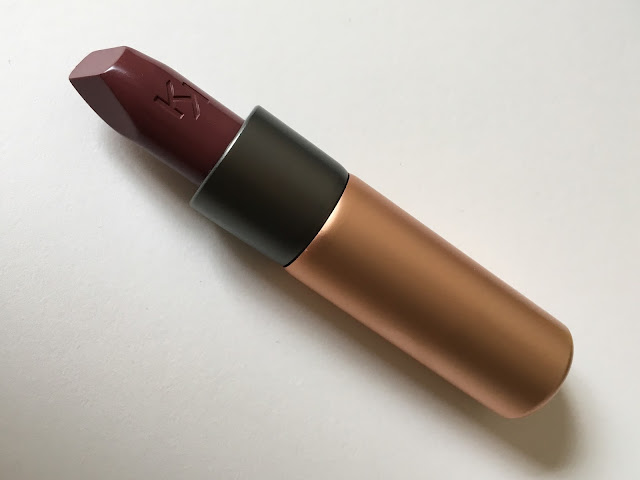 The lipstick has a mild vanilla scent reminiscent of the signature MAC fragrance. 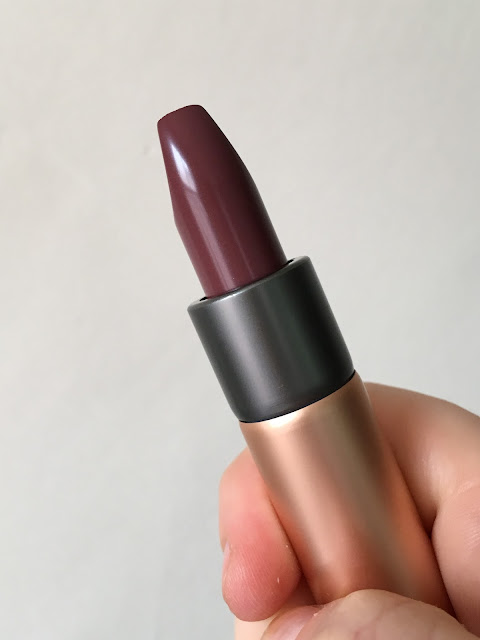 The two-toned tube is (partly) real metal, with a magnetic cap. I associate magnetic tubes with higher-end brands like NARS and Marc Jacobs, so it was a thrill to find a magnet in my Kiko lipstick. It's a little weird that the cap overlaps the tube but doesn't extend to the bottom, but I appreciate the cyberpunk distinctiveness of the design. I can imagine Rachael in Blade Runner pulling this tube from her purse. 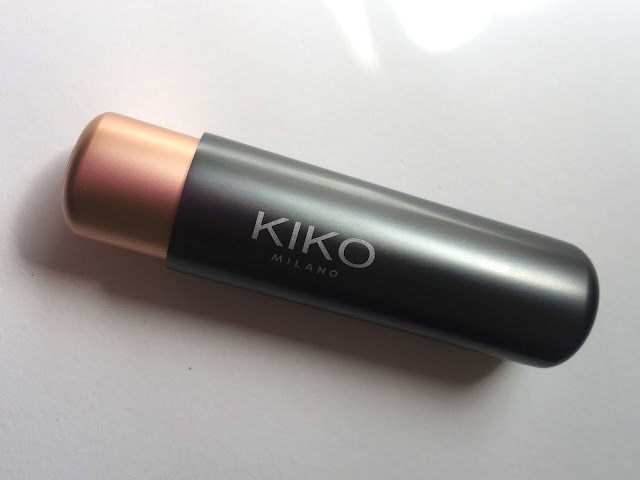 In the past, I've written about lipsticks with good formulas but subpar packaging. Kiko 319 has the opposite problem: the lipstick itself doesn't quite live up to its exterior. This isn't a bad lipstick by any means, but the pigmentation is lacking. Here's one swipe on my arm: 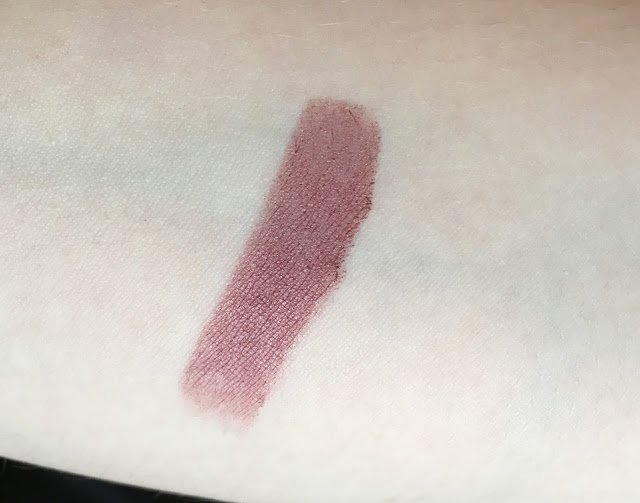 I feared that 319 would be a dupe for MAC Whirl, but it's much more purple, especially on my lips.

I can get decent pigmentation if I build up the color on my lips, but the formula clings to dry spots instead of smoothing them over: exfoliation is important! Here's two coats of 319 on a good lip day: 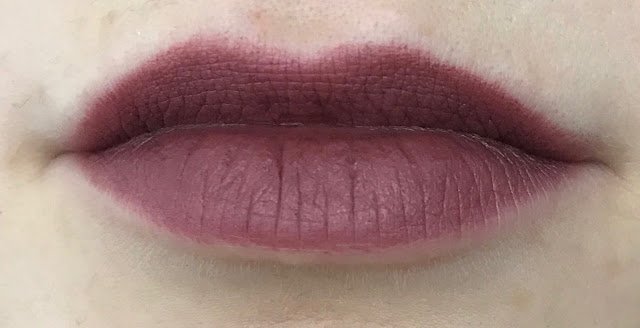 Because of the slight sheerness of the formula, 319 seems to look different on everyone. I've seen reviews in which it pulls brown or greige; on me, though, it's a brown-tinged purple reminiscent of (but much warmer than) NYX Up the Bass. (Interestingly, the brown and nude shades in Charlotte Tilbury's Matte Revolution formula seem to have the same translucency.) 319 isn't patchy—the product applies pretty evenly, without a lot of slip—but it doesn't have the color payoff I'd expect from a MAC or Urban Decay matte lipstick. For that matter, its finish is closer to satin than true matte. It feels comfortable on my lips, but it transfers easily onto cups and straws and needs touch-ups almost hourly, which is a pain. I think I'll try layering it over a mauve lip liner and update this post if that helps.

For the look below, I used ColourPop Super Shock Shadow in Dance Party all over my lids, blending out the crease with ABH Buon Fresco and adding some more Buon Fresco to the lower lashline. My blush is Urban Decay Rapture. The bluer purple of the eyeshadow clashes with the warm purple of the lipstick, but I don't really mind: 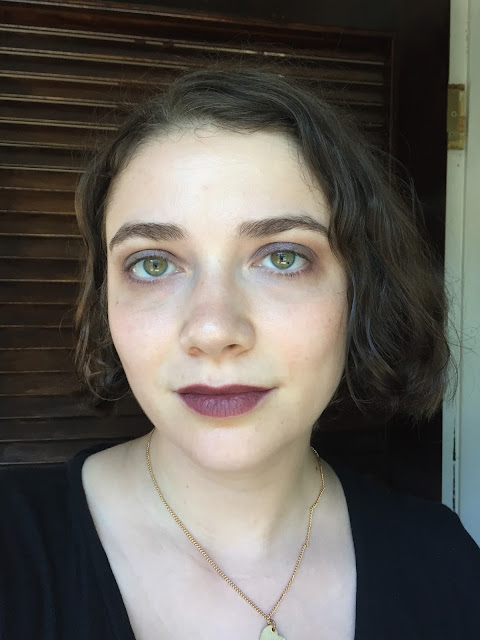 Dance Party is a sheer purplish black with fuchsia and blue glitter. I included it in my last ColourPop order because it was so pretty in the pan, but spent an entire month figuring out how to wear it. Glitter eyeshadows in lighter colors are easy to use—pop them in the center of the lid or the inner corners—but dark glitters are trickier. Initially, I tried a smoky look with a few more Modern Renaissance shadows, but it came out weird and muddy. Clearly, I was overthinking it. 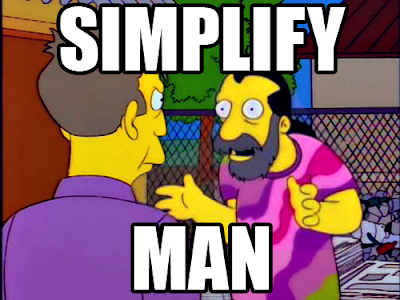 In my next attempt, I used Dance Party as a sheer wash of color, and was pleased at how understated it looked. Let me know if you've come up with a better way to wear similar shadows, though, because I'm stymied. 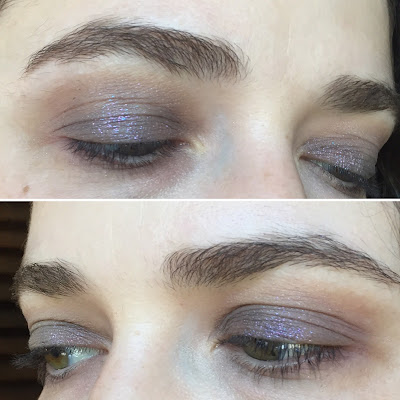 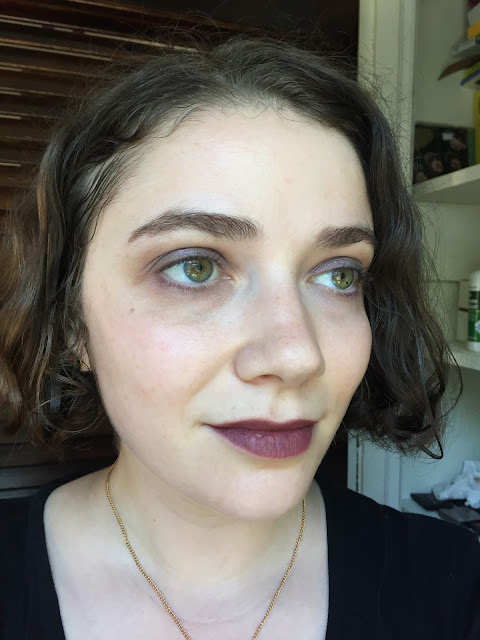 I don't think I'd run out and buy another Velvet Passion shade (though the bolder colors do seem more pigmented overall), but I'm pretty happy with this one. I'm also happy that I haven't bought any new makeup in over a month! I'll write a low-buy update soon, but for now I'll say that since I stopped obsessively recording and planning my beauty purchases, I've found it much easier to resist temptation. Strange how the mind works, isn't it?
Posted by auxiliary beauty at 8:19 PM