Most makeup collectors have their color kryptonite, particularly when it comes to lipstick: pinky nudes, corals, blue-based reds. For me that color is, and has pretty much always been, magenta. Or whatever you want to call it: bright plum, dark fuchsia, anything that walks the line between purple and deep pink. I just did a lazy Google search for "magenta," and here's the image that comes closest to my Platonic ideal: 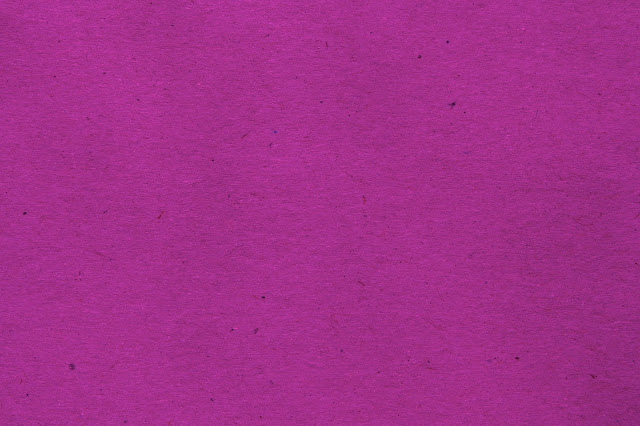 Magenta isn't a particularly trendy color these days. It evokes 1980s excess, and can read especially '80s if paired with blue or green. For proof, here's my own vintage '80s dress, which I can't wear in public because I'm a somewhat self-respecting adult, but also can't get rid of because look at it: 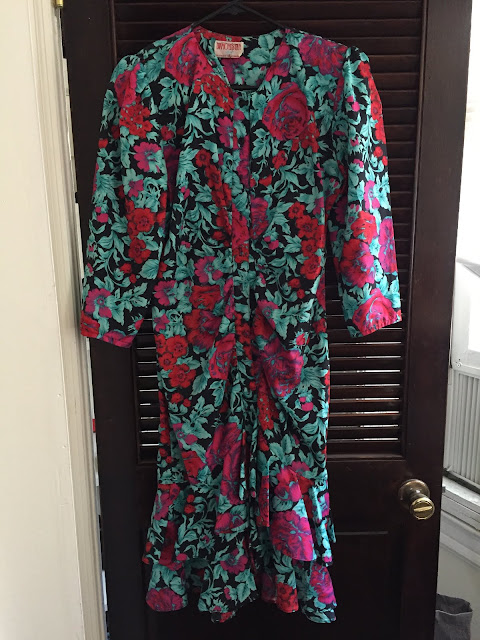 Detail of the pattern: 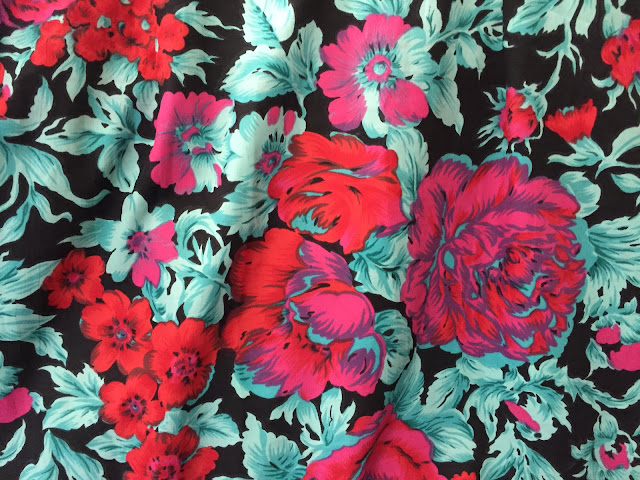 There is something tacky and hedonistic about magenta, but my natal decade was not the only tacky, hedonistic one in history (though it sure came close). In fact, magenta is a nineteenth-century color, a product of the Industrial Revolution. Created in 1859 from an aniline (i.e. synthetic) dye called fuchsine, it was subsequently renamed to celebrate the Battle of Magenta, in which the French and Sardinian armies defeated the Austrians near the town of Magenta in northern Italy. We have a natural tendency to imagine the nineteenth century in sepia or black and white, but check out this stunning dress from c. 1869-70. I've been lucky enough to see it in person at London's Victoria and Albert Museum, and yes, it really is this bright:


Back in April, I went to the Cooper Hewitt's Jazz Age exhibition (well worth visiting if you're in NYC before August 21) and spent a few minutes ogling this French sidewall pattern from the late 1920s:


Nor is magenta strictly a Western color. I've been following the world of geiko (Kyoto geisha) and maiko (apprentice geiko) for several years now, and I've seen a surprising number of magenta kimonos and obis. Here's maiko Masaki, one of my faves, in 2013:


I like magenta not only because of the color's historical associations, but also because it's one of the most flattering shades for my cool-toned skin, dark hair, and green eyes. I currently own two lipsticks that could be described as "magenta": MAC Rebel, a gift from a friend last year, and Wet n Wild Liquid Catsuit in Nice to Fuchsia, which I bought last month. 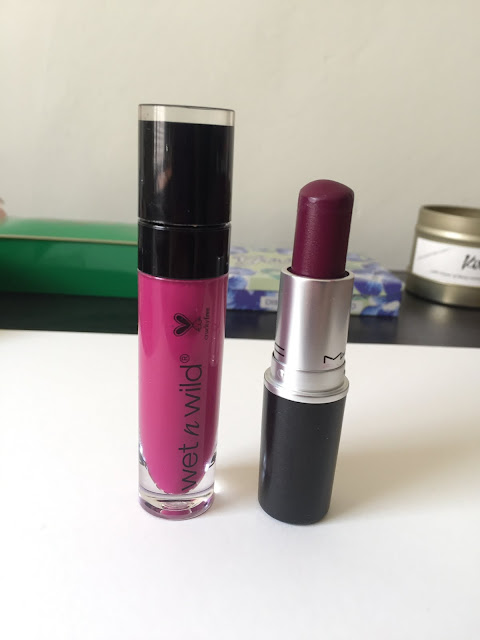 The two shades look almost identical on my arm. Rebel on the left, Nice to Fuchsia on the right: 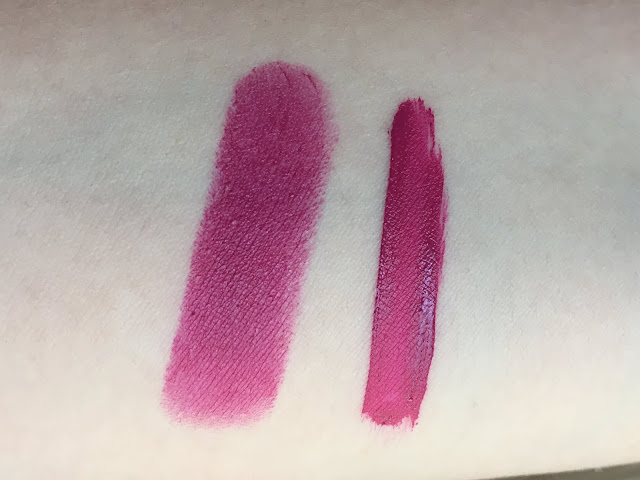 With a few other magenta- and plum-adjacent lipsticks:


On the lips, however, it's another story. Obvious formula differences aside, Nice to Fuchsia (right) is brighter and pinker, while Rebel is closer to plum than to a true magenta. Excuse the laughably bad application, thx. 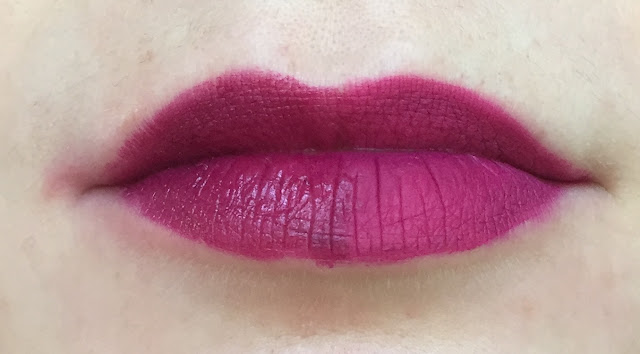 Since I've worn each of these lipsticks several times at this point, I thought I'd give a review of each, starting with the classic MAC shade Rebel. I'd been considering buying it for years, so when my friend offered to buy me a lipstick of my choice in exchange for my mailing her some books and papers, I didn't hesitate to request Rebel. Here it is in unspoiled condition, back in October: 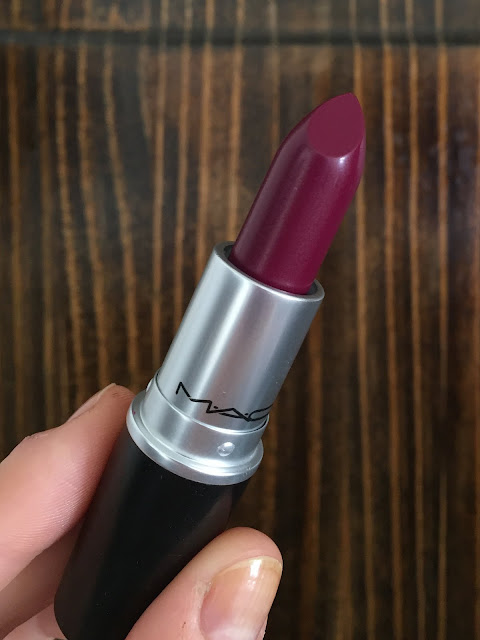 I have an easier time using negatives than positives to describe the color of Rebel: it's lighter than plum, more purple than berry, yet redder than a true purple. I've categorized it as "berry/plum" in the record I keep of my lipstick usage (Nice to Fuchsia is in the "pink" category), but I'm not entirely happy with that. Here I am wearing Rebel outside last fall, just before the election. Happier times for sure, though I have more effective sunglasses now. 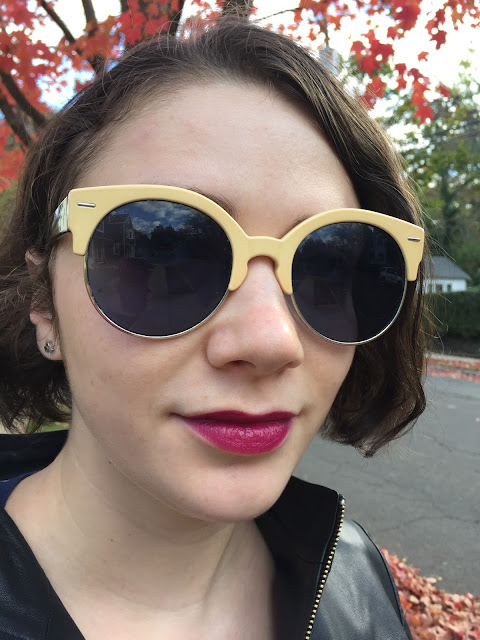 Before Rebel, I'd tried one other lipstick in MAC's Satin formula: Pink Nouveau, which had a semi-matte finish that I found quite comfortable. Unfortunately, Rebel is very different. As you can see from the two photos above, it has a fairly shiny finish. And like other magenta lipsticks I've tried (Revlon Crush, NARS Angela), it seems to separate into two layers on my lips. On top, there's the darker, glossier layer that lasts a couple of hours and transfers easily onto cups. Below that, there's a brighter fuchsia layer that sinks into my lips, dries them out a bit, and stains them for a disturbingly long time. In fact, Rebel might be the most staining lipstick I've ever worn. I can remove Rebel at the end of the day, wipe my lips with Vaseline (which I use to remove matte liquid lipsticks), exfoliate them with a washcloth, and go to sleep, and my mouth will still be bright pink when I wake up the next morning. There must be some specific magenta pigment that does this, because it doesn't happen with any other color of lipstick. In any case, it's annoying as hell and ensures that I wear Rebel less often than I'd like. Why doesn't magenta love me back? :(

Let's move to a slightly happier subject. Nice to Fuchsia is my third Liquid Catsuit shade, after Missy and Fierce and Nudist Peach, both of which I reviewed here. In terms of opacity and comfort level, I'd put NtF above Nudist Peach but below Missy and Fierce, still the best liquid lipstick I've ever tried. After one layer, NtF is a bit streaky if you look closely. I doubt anyone you encounter out and about would notice, but you will probably notice, and it will annoy you. Here it is after I've evened it out a bit: 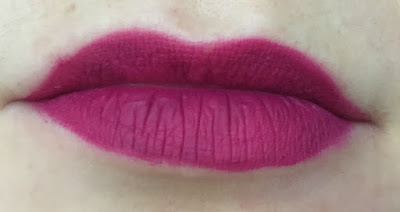 Not bad, though the touched-up spots don't dry down as fully as the single layer. Otherwise, though, I have no complaints about the formula. It looks perfect until I eat a full meal (I always remove my lipstick before meals anyway), and it's not drying AT ALL. And if you've been reading this blog for any length of time, you know that I have very dry, sensitive lips that react badly to formulas other people praise as moisturizing. I still can't comprehend how Wet n Wild has managed to produce a fully matte, non-drying liquid lipstick formula for $4.99 (and I got this particular shade for $2.99, score!). I can't guarantee that it will work so well for you, of course, but I continue to be deeply impressed.


In my experience, the best way to nudge a magenta lipstick out of '80s territory is to pair it with warmer tones on the eyes. Below, I'm wearing Seventeen Statuesque eyeshadow and Urban Decay Whiskey eyeliner, along with ColourPop Lunch Money highlighter and a light application of NARS Mata Hari blush: 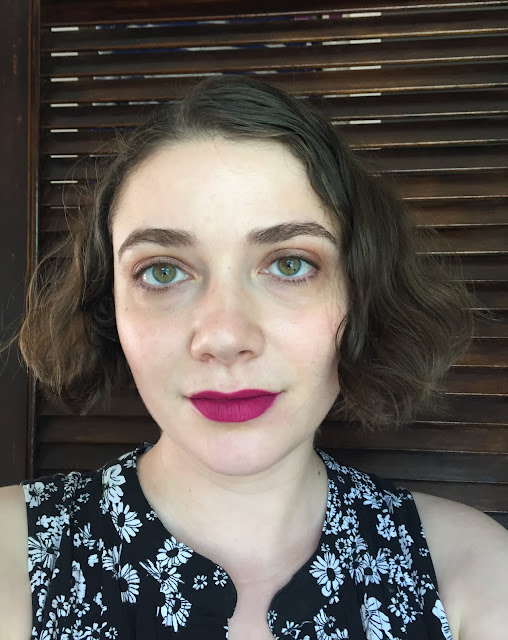 Side view (this is as close as I come to ~GLOWING FOR THE GODS~): 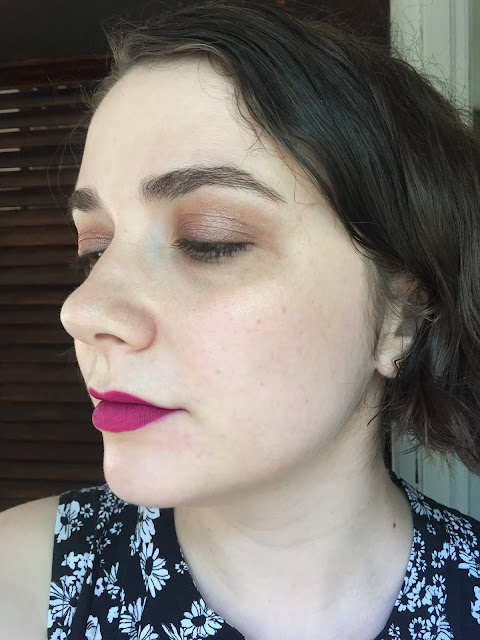 My one real problem with Nice to Fuchsia has nothing to do with the product and everything to do with me: after six years of wearing makeup, I still can't apply a liquid lipstick properly. My upper lip is on the thin side, so it's almost impossible to outline my Cupid's bow precisely with any applicator. My lower lip is fuller, so it should be easier to cover with lipstick, but somehow it's not. On my first attempt, I always draw the lower lip too small. Then I go over it and end up overlining my lips. Then, because the excess product has dried down and I can't simply remove it with a finger, I go back in with a twisted-up tissue dipped in Vaseline. Of course that takes off too much color, so I draw the outline again, and suddenly one side of my lower lip is larger than the other, as if I've been punched. Then I start wondering why the hell I have a blog about makeup. I suppose because I enjoy it, and because you keep reading it. (Thank you.)
Posted by auxiliary beauty at 11:04 AM