Though I was skeptical of Urban Decay's decision to pull its entire Revolution lipstick line last year and replace it with the even more extensive Vice line, I've come to appreciate the wisdom of that move. The lipsticks are now $5 cheaper ($17 vs. $22) and 0.6 grams larger (3.4 vs. 2.8); the bullets no longer have the wide, flat tip that made application so challenging; and I haven't noticed an overall dip in formula quality (though I can't say I've swatched all 120 shades). The packaging is lighter, but in my opinion, the functionality has improved: the thinner Revolution lipsticks often wobbled in their tubes, while the Vice lipsticks feel secure. Fine, Urban Decay: I'm a cynical bitch, but you win this one. 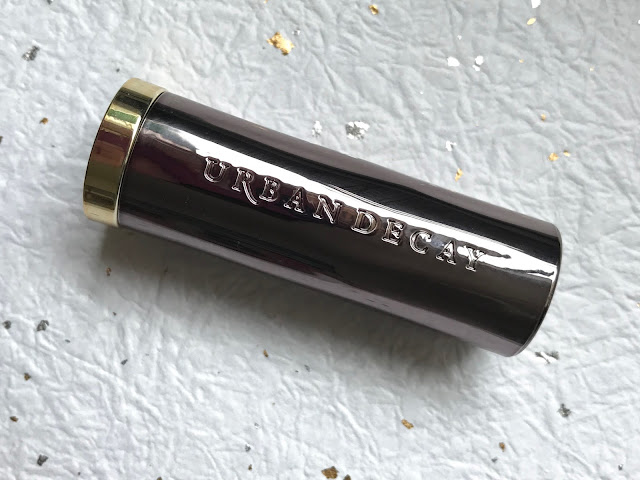 I now own three Vice lipsticks, one in the Comfort Matte formula (Backtalk, which is apparently the most popular shade) and two in the Metallized formula. My first Metallized lipstick was Roach, a deep bronze from the LE 20th-anniversary collection last year. Oddly, many of my favorite beauty products have been impulse purchases, and so was Roach. I quickly fell in love with the formula: moisturizing, almost opaque in one coat, creamy but not slippery. So when NYX Liquid Suede Metallic Matte in Modern Maven proved disappointing, I wondered if I could find a similar metallic brownish plum in Urban Decay's lineup. The Vice collection is so enormous that I don't have a mental catalog of names and colors, as I do with other brands' lipstick offerings. But there's something satisfying about approaching a huge display of lipsticks with an open mind and gazing stupidly at the rows of shades until one catches my eye. Perhaps it's the thrill of serendipity, or the comforting reminder that no matter how much of my precious hours I've devoted to memorizing lipstick names, I could have wasted even more time.

(Correction, 9/1/17: Roach is actually a Cream lipstick, not Metallized, but its formula is almost identical to Amulet's. By the way, Urban Decay just added Roach to its permanent lineup!)

The two shades that immediately stood out as candidates were Conspiracy, a "plum-bronze shimmer," and Amulet, a "metallic brick-rose." Here's Amulet on the left and Conspiracy on the right, in direct sunlight: 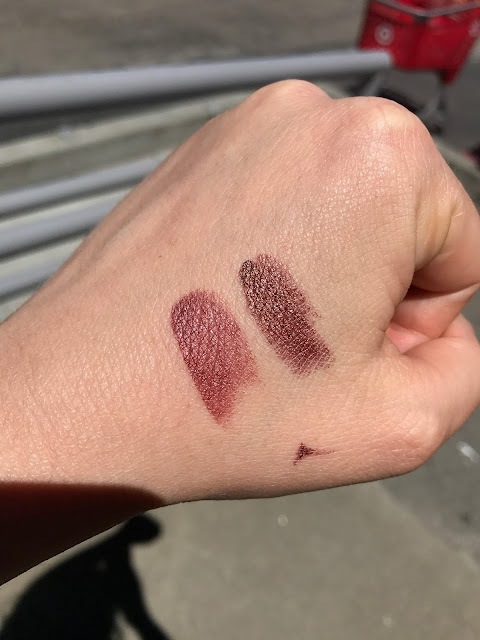 "Plum-bronze shimmer" was exactly what I wanted, but that description actually seemed better suited to Amulet, which I ended up buying toward the end of my San Francisco stay. (The name may have influenced my decision, too: amulets feature in some of my favorite Adventure Time episodes.) 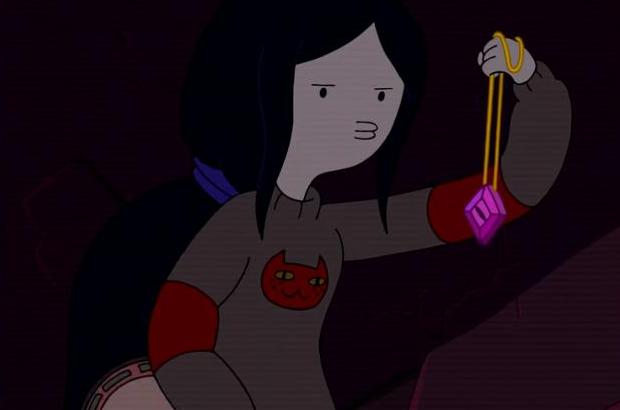 Do you like my new photo background? I bought this beautiful paper at the Maido stationery store in SF's Japan Center. 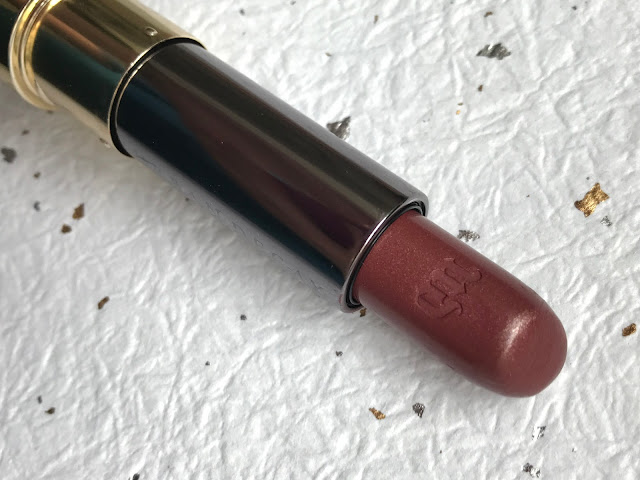 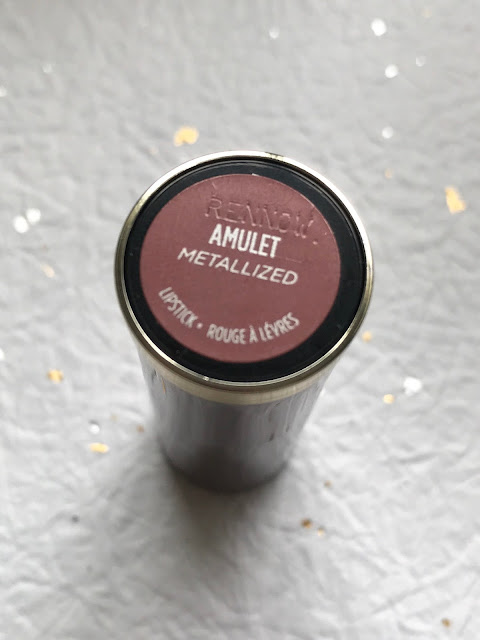 I couldn't resist putting on my new lipstick before I got home from my shopping trip, so here's a shot of the unspoiled tube near City Hall, right after I devoured some excellent Vietnamese vermicelli with tofu from the Little Green Cyclo truck. 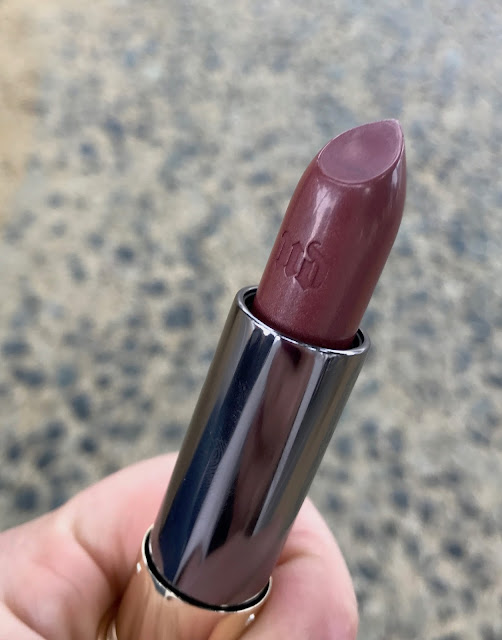 Amulet is a very shifty color, appearing more plum outside and more copper-brown under warm artificial light. Why am I so attracted to lipstick colors that defy description? Here's a lip swatch of Amulet in indirect natural light: 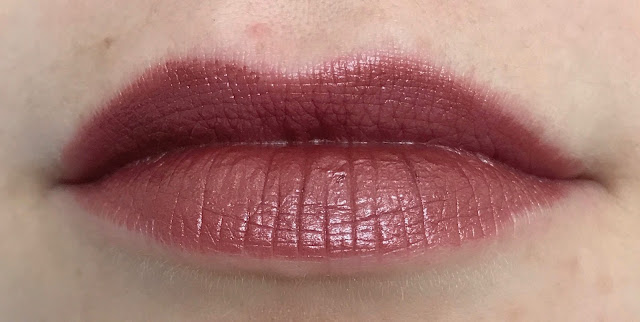 And in direct sunlight:

Needless to say, I didn't bring my full lipstick collection on my travels, but here's Amulet swatched next to a few colors I have on hand. Amulet looks very similar to Wet n Wild Rebel Rose here, but it pulls noticeably warmer on my lips.


I've read mixed reviews of Urban Decay's Metallized Vice formula, but I find Amulet just as impressive as Roach, if not even better. It's creamy, comfortable, and not at all drying, and it lasts several hours without the need for touch-ups. It seems to cling to my lips, almost as if it's bonding with them. Amulet isn't blindingly metallic, but it has an unmistakable sheen.

Here it is on my face on a very cloudy day. I have no idea what my other makeup is, but I'm clearly not wearing anything exciting. 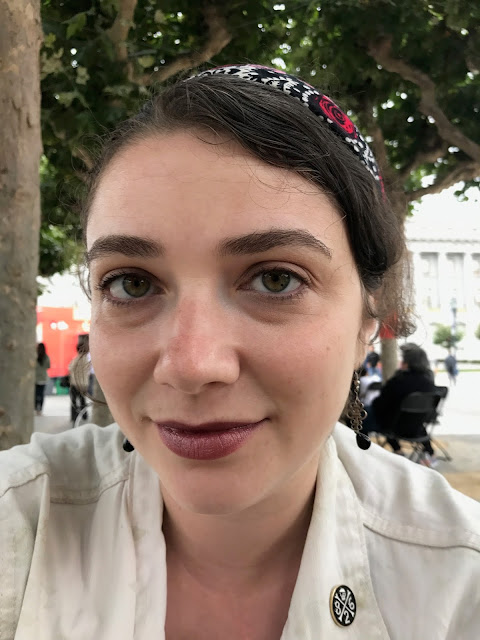 Here's Amulet inside, with ABH Antique Bronze eyeshadow and NYX Burnt Sienna lipstick on my eyes. I think my blush is Urban Decay Rapture, not that it matters when you can't really see it on my face. 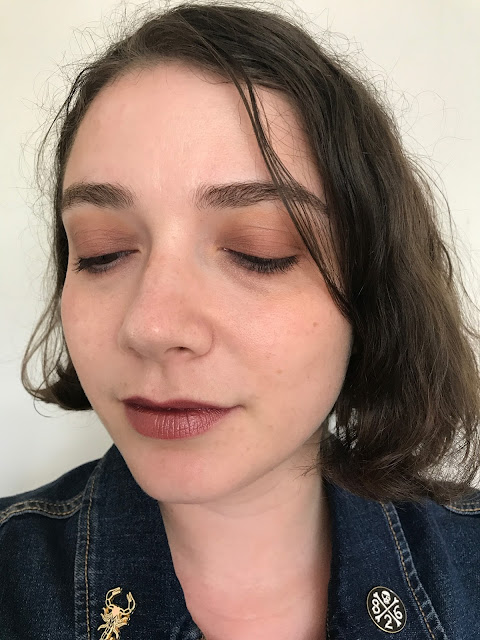 In a coffee-shop bathroom (classy, I know), under (I think) fluorescent light: 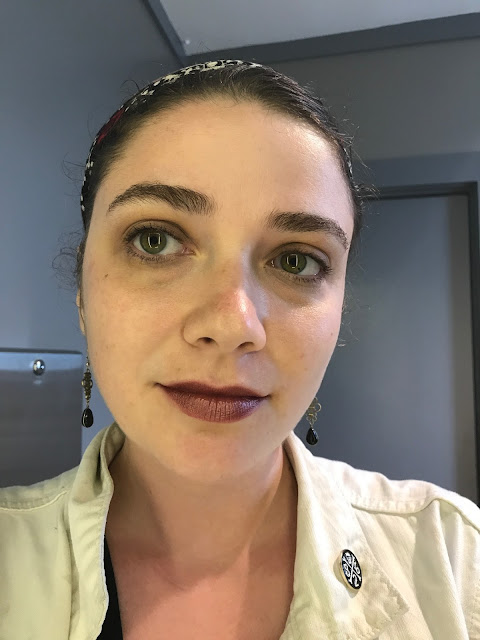 Overall, I'm absolutely delighted with my third Urban Decay Vice lipstick. Here's hoping it's the lucky amulet I need for this fall!
Posted by auxiliary beauty at 2:48 PM