Since my last post, I've crossed a few thresholds: the autumnal equinox, my 30th birthday, and my dissertation deadline. (For the record, 30 feels exactly like 29, and I was so busy in the weeks leading up to my birthday that I didn't even have time to freak out over becoming an Old.) Now that the worst of the semester is over, I think I'll have more time for blogging, though I doubt I'll be able to post more than once a week. At least that's better than never.

I thought I'd ease back into my posting schedule (if it even deserves that name) with a quick update to the Project Pan post I wrote two months ago. In early September, I resolved to pan four lipsticks by the end of the year: Glossier Generation Gs in Cake and Jam, Revlon Matte Balm in Sultry, and NARS Sheer Lipstick in Flamenco. On September 8, the lipsticks looked like this:


Almost exactly two months later, they look like this: 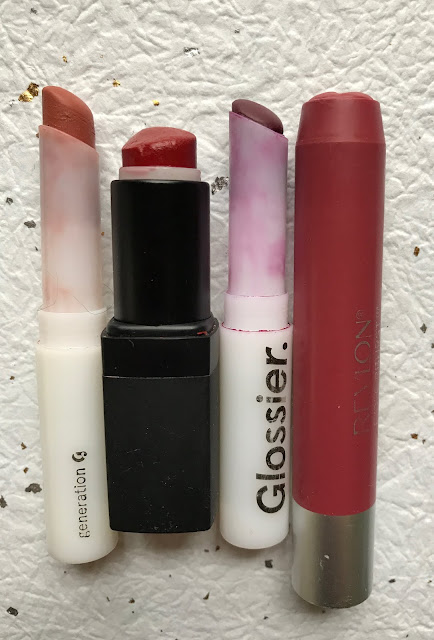 As you can see, I've made significant progress on Jam and Sultry, each of which has maybe two days of wear left. I'm teaching a lot this semester, and Sultry is a great lipstick for situations in which I want to look as professional as a dirtbag grad student possibly can. I wore Sultry about twice a week in September and October and never felt that I was forcing myself to do so. I switched to darker lipsticks closer to Halloween, but now that fall break is almost over, I think I'll be able to finish Sultry in the next week. Here it is on a recent teaching day; I can't identify any of my other makeup except the eyeshadow on my lids, which is Seventeen Statuesque: 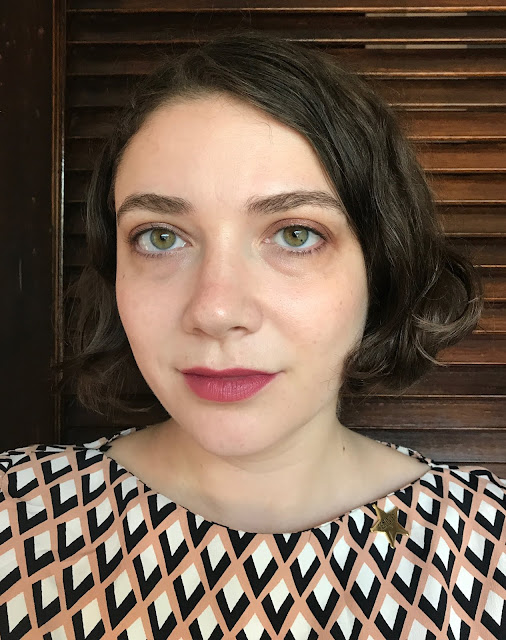 I rarely wear Jam as part of a full face, but I do like it as an "in-between" lipstick: sometimes I'm wearing a higher-maintenance color that I don't have time to reapply after it wears off, so I'll swipe on Jam and wear it until I find a chance to put on the bolder color again. Jam is also a good choice for running errands on days when I'm too lazy for anything but lips and maybe brows.

I've been having more trouble with the other two. Cake was simply a bad choice for a fall panning project, since I prefer deeper shades this time of year. I think I'm going to set it aside and try to pan it in the spring. And though I've worn Flamenco a few times since I started this project, it just doesn't work for my complexion or the looks I prefer. It's a little too bright and warm to flatter me, yet it doesn't quite commit to being a bright warm red. It has a hint of brown, yet it's not a brick red. It leans cool in most lights, yet it's not a pinky red. And while all this might indicate that it's a perfectly balanced neutral red, it's somehow not that, either. I can't believe I used to wear Flamenco almost every day (this is actually my second tube!). Funny how tastes change. 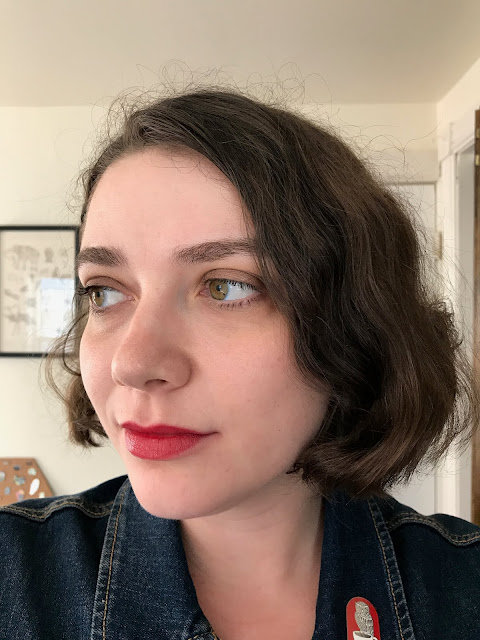 See what I mean? It just looks off. While I was scrolling through the photos on my phone yesterday, I stopped at the one above and thought, "Whoa, what's that awkward-looking red?" It was Flamenco, of course. Much as I hate to get rid of lipsticks in good condition, I decided at that moment to destash Flamenco. It's not terrible, but I have dozens of lipsticks that I absolutely love; I'm not going to waste my time on a mediocre one that's almost five years old.

I'll do one more update next month; by that time, I'll probably have finished Sultry and Jam!
Posted by auxiliary beauty at 1:54 PM